After six seasons — filled with countless public forums, ridiculous small-town foibles, and an obscene amount of waffle consumption — Parks and Recreation took its final bow last night. Considering how many times the show teetered on the verge of cancellation, it’s amazing that the sitcom made it this far, but pop culture is immeasurably better for it. Thanks to a truly stellar cast, led by Amy Poehler as the ever-idealistic Leslie Knope, and consistently smart and funny writing, Parks will be remembered not just as a great sitcom, but a great TV show, period.

For its swan-song season, the series’ co-creator and showrunner Mike Schur took a risk by fast-forwarding the storyline several years into the future, showing life in the fictional Indiana city of Pawnee circa 2017. That gamble, for the most part, paid off: Thanks to a steady flow of cash from the Facebook-esque social network Gryzzl, the show’s Midwestern locale is actually a nice place to live — it has yoga studios, juice bars, and even an abundance of kale — and the characters are now further along in their lives. April (Aubrey Plaza) and Andy (Chris Pratt) are responsible grown-ups; Tom (Aziz Ansari) is a successful businessman; and Donna (Retta) is actually getting married. And the jump provided ample opportunities for drama — one of the season’s best episodes dealt with the falling-out between Ron (Nick Offerman) and Leslie, and their eventual drunken reconciliation.

A Peek at Pawnee: Behind the Scenes of 'Parks and Recreation'

The finale brought the cast back to where it all started: the Parks Department. “We need to celebrate everything we’ve done together as a group,” says Leslie, who gets a chance to tell everyone how much she loves them for the thousandth time.  The flash-forwards continue, offering a glimpse at where the gang eventually ends up, whether it’s playing charades with Joe and Jill Biden (Leslie, obviously), having a second act as an author and motivational speaker (Tom, surprisingly), or simply basking in the Great Outdoors while praising the virtues of minimal governmental interference (Ron, whose Willie Nelson-soundtracked canoe ride into the sunset was one the show’s most breathtakingly beautiful moments ever). You could call it fan service, certainly — or you could recognize that the show’s happily-ever-after ending is perfectly in tune with the humanity that has defined the show from its very beginning.

Parks was initially intended as a spin-off of the American reboot of The Office, with co-creator Greg Daniels and Schur (a.k.a. Dwight Schrute’s mute, mischief-making cousin Mose) at the helm. Though the spin-off idea was abandoned, P&R‘s first season still hewed closely to its brethren’s cringe-comedy stylings, down to the mockumentary template, the workplace antics, and Amy Poehler’s buffoonish boss wreaking havoc. It didn’t quite jibe, and not just because it was impossible to imagine Poehler as a Michael Scott-esque rube. (Come on — we’re talking about a woman who rapped alongside Sarah Palin while eight months pregnant.)

But astoundingly, the creators course-corrected in Season Two, giving the characters a depth and emotional range that felt leagues different from the first six episodes. Gone was the naïve, ineffectual Leslie Knope, replaced by a woman who was ambitious, capable, and loved her job — and, importantly, was damn good at it. As the series progressed, Knope ended up becoming one of television’s most unapologetically feminist characters, one who keeps photos of Hillary Clinton and Madeleine Albright in her office, and challenges gross gender stereotypes from the clueless men around her. And props to the writing staff for continuing to bring those issues to the forefront: A recent episode dealt with double-standards applied to working parents and Leslie shutting down a group of men’s right’s activists; in the finale, Leslie’s equally ambitious husband steps aside so she can run for governor. Baller move, Ben Wyatt. 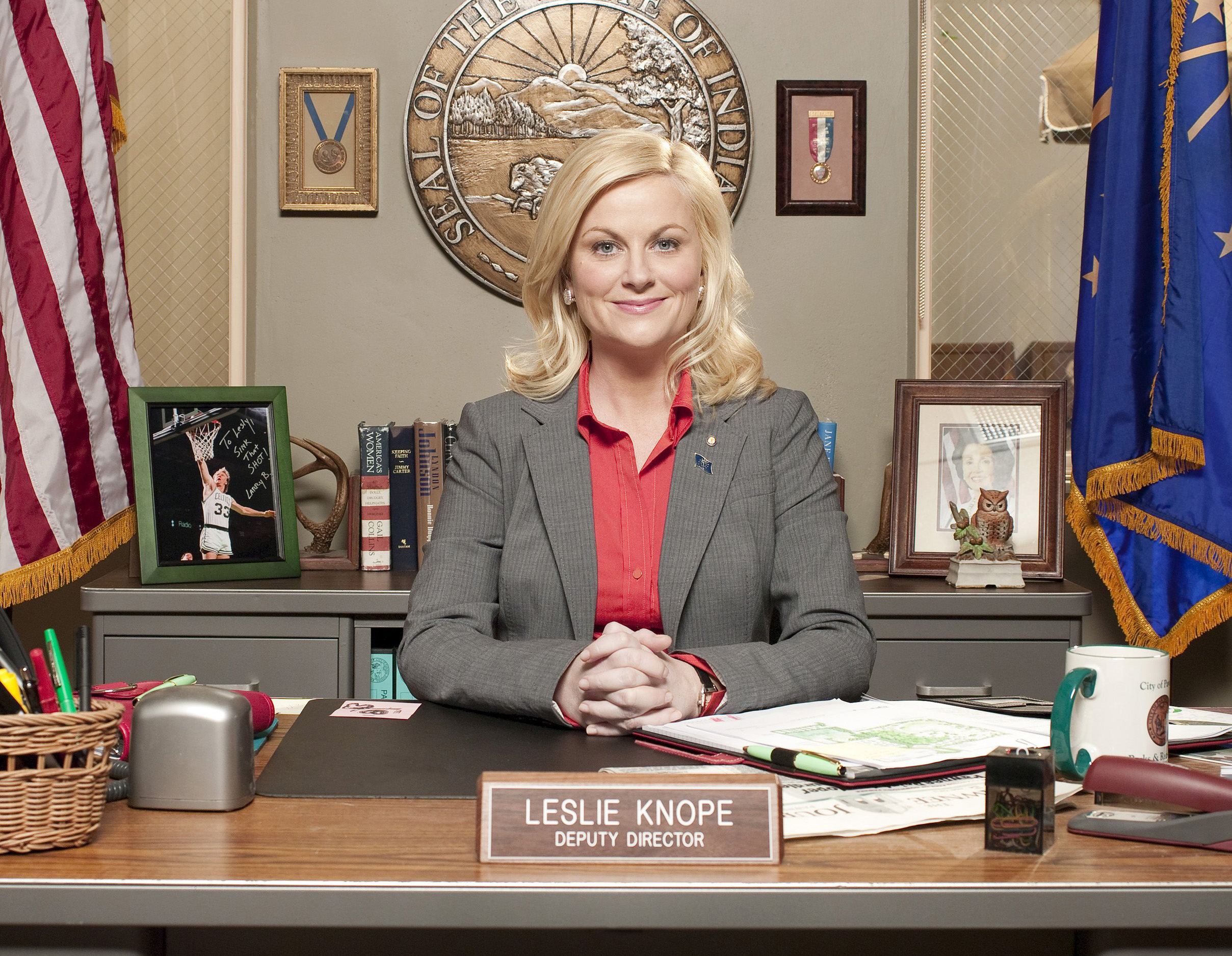 The second season is also when Parks also began to carve out the identity that would come to not only define the series, but differentiate it from so many others with which it shared Must-See-TV airspace. The show’s point of view isn’t rooted in cynicism; instead, it’s informed by a deep-seated optimism, fueled by Knope’s relentless glass-half-full outlook and can-do attitude toward doing your civic duty. Even when things start going pear-shaped — Pawnee goes bankrupt, Leslie loses her city council seat — she truly believes that things will work out for the best, and does everything in her power to make that happen.

She also pushed her fellow Pawnee residents to be the best versions of themselves, whether she was helping her BFF Ann find a job or encouraging the show’s resident Eeyore, April, to actually give one-tenth of a shit about something. For Leslie, friendship was sacred — look at how seriously she treats Galentine’s Day — and that warmth spread to the other characters, who all formed close bonds over the course of time. It may not seem that radical, but there haven’t been many sitcoms in recent memory where the characters are essentially good-hearted, humane people who genuinely enjoy each other’s company. (Well, aside from Jerry/Larry/Garry Gergich — but even he has a beautiful wife, ends up serving 10 terms as Pawnee’s mayor, and lives a long, satisfying life.)

What makes the end of Parks so special is that it arguably went out at the top of its game, and inarguably on its own terms. When the series began, the cast was mostly little-known comedians and characters actors; now, Chris Pratt is a bona fide action star, Aziz Ansari sells out Madison Square Garden doing stand-up, Aubrey Plaza is on her way to headlining big-screen comedies, Nick Offerman has become a posterboy (and potential one-man industry) for modern retro-masculinity, and we’re 99 percent sure Amy Poehler is going to run the universe at some point. It was clear that Parks‘ life cycle was coming to an end; to paraphrase Poehler’s last-ever line of the series, yes, they were ready. But luckily for us, we got one more great season and a finale that remained true to the spirit of the show. We couldn’t ask for anything more. (Except maybe a hint as to whether or not Knope actually becomes the first female President — we’re just going to assume that her lifelong dream is fulfilled.)

Near the end of the finale, Leslie is giving a speech as she accepts an honorary doctorate in 2025, proclaiming “what makes work worth doing is getting to do it with the people you love.” This was true not just in the world of Pawnee, but for the cast and crew: The end credits showed a blooper reel filled with on-set shenanigans, while the final card was a tribute to Harris Wittels, one of the show’s longtime writers and producers, who tragically passed away last week. It was a sweet, loving send-off to a man who contributed a lot to Parks and Recreation‘s sui generis sensibility.