Kevin Nash Enters the WWE Hall of Fame: He Did It His Way - Rolling Stone
×
× 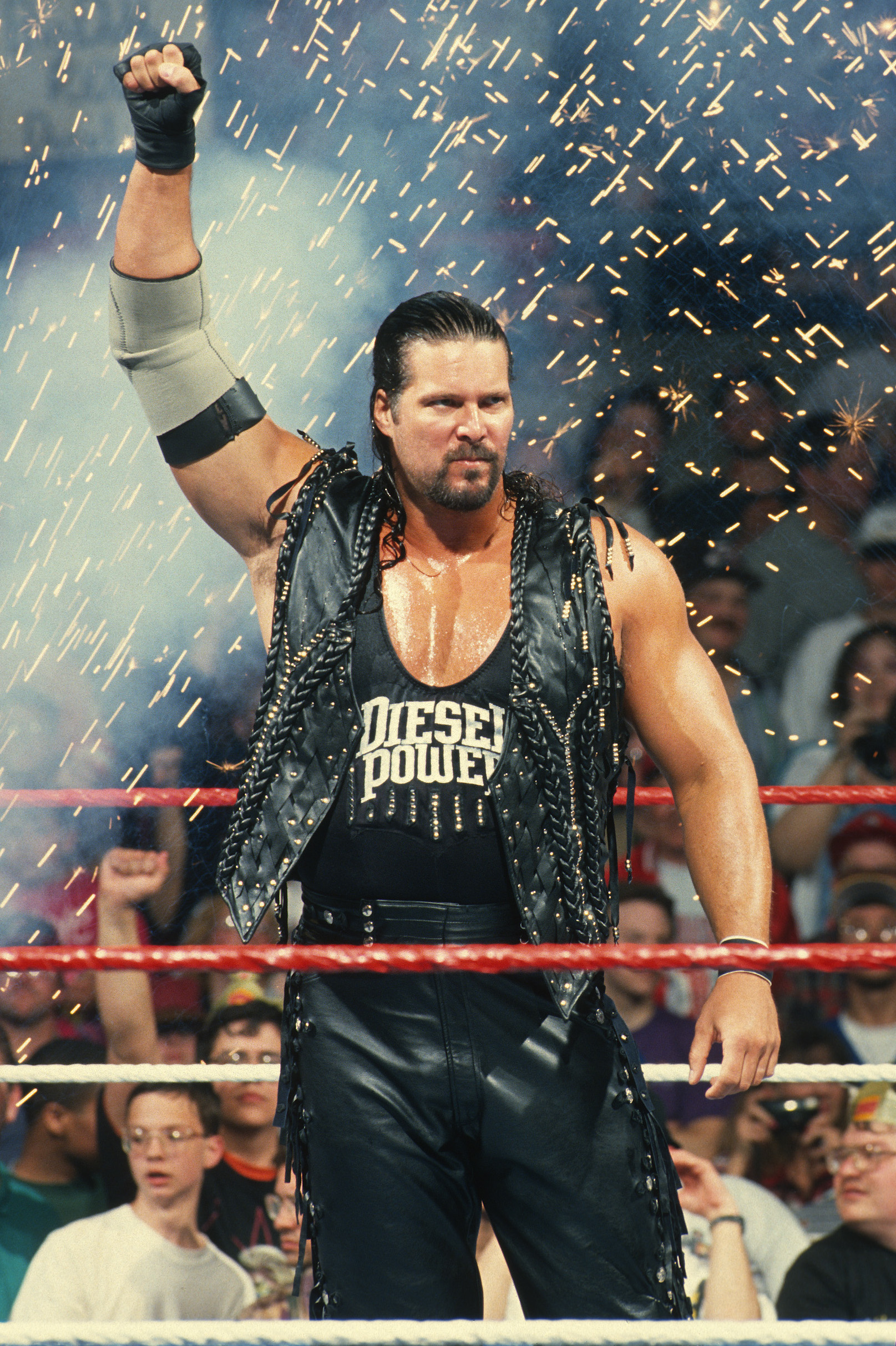 During the course of his 25-year career, Kevin Nash has wrestled as Oz, Vinnie Vegas and Diesel, appeared on the big screen as Super Shredder (in TMNT II: The Secret of the Ooze) and a super stripper named Tarzan (in the surprise hit Magic Mike) and been singled out as both the biggest draw in – and the biggest problem with – professional wrestling. Often at the same time.

Now, you can call him a WWE Hall of Famer. What better way to sum up a quarter century as accomplished as it was controversial?

“I’ve been called just about everything, but this is the first time I’ll be called a Hall of Famer. It’s nice,” Nash laughs. “It’s been a long 25 years, but this business has been great to me. Without wrestling, there’s no way I’d be where I am today. I’d probably own a strip club someplace.”

Nash will be inducted into the Hall on March 28 – the night before WrestleMania – at a ceremony that airs live on the WWE Network at 8 p.m. ET. He’s the final member of a 2015 class that also includes “Macho Man” Randy Savage, Women’s Champion Alundra Blayze, “Living Legend” Larry Zbyszko, Japanese icon Tatsumi Fujinami and celebrity honoree Arnold Schwarzenegger. As you can probably expect, Nash’s enshrinement has already been the subject of much speculation; for starters, no one seems sure what name he’ll use when he enters (“I would prefer to go in as Kevin Nash, you know, the human being,” he says – and a WWE spokesperson later confirmed he would). And then there’s the matter of his career itself.

Unlike most, Nash entered the business late in life, joining WCW after playing basketball at the University of Tennessee and professionally in Europe (he also worked as an MP in Germany and on an assembly line at a Ford plant). During that initial run with Ted Turner’s company, Nash first wrestled as Steel, one half of the monstrous tag team the Master Blasters, and was later saddled with gimmicks like Oz (a gray-haired wizard) and the wise-talking Vinnie Vegas. It was while he was working as the latter that he caught the eye of WWE icon Shawn Michaels, who insisted Vince McMahon bring him to the promotion as an in-ring enforcer. And from that moment on, Nash’s life was never the same.

“Shawn seeing me as Vinnie Vegas on WCW TV, asking Vince to bring me in as a bodyguard, that’s where I learned the business,” Nash says. “Sitting ringside, watching Shawn and Scott Hall work, all of my progression was because of them. The exposure I got because of that changed my career forever, and I’m eternally grateful to Shawn and Scott and Vince McMahon, because WCW couldn’t do anything with me.”

Nash, now wrestling as Diesel, would make the most of his opportunities, winning the Intercontinental and Tag Team titles, then taking the Heavyweight Championship from Bob Backlund in 1994. He’d hold the belt for nearly a year (his reign was the single longest of the 1990s), but his close friendships with Michaels, Hall, Triple H and Sean Waltman bothered some backstage – the group was derisively referred to as “The Kliq” – and when Hall and Nash decided to leave WWE for massive guaranteed contracts with WCW, the group broke decades of wrestling tradition by embracing in the ring, an incident that would come to be known as “The Curtain Call“. It angered wrestling veterans schooled in the code of kayfabe – which held that all events within the ring were real, especially feuds between wrestlers – and earned Nash a reputation as a guy who put himself before the business. Nearly 20 years later, the new Hall of Famer is still dealing with the notoriety.

“When people write articles about why I should or shouldn’t be in the Hall of Fame, inevitably they always mention something about all of that,” he says. “To be honest, I think the thing I’m most proud of is that I always viewed this as a business, and without me doing some of those things, this business wouldn’t be as lucrative for some of the guys as it is today.

“But my whole thing is, for someone that didn’t love the business, I sure did come back from a lot of injuries and work through a lot of pain,” he continues. “I never wanted to let a company down because of injuries. We all get injured, but we all continue, and I still do it. I’m still on the road, still at the gym.”

The controversy would only continue when he stormed WCW Monday Nitro with Hall, beginning an invasion angle that saw the two men play up their WWE fame, while at the same time trashing Ted Turner’s promotion as second-rate. It was one of the first times in the sport’s history where backstage dealings were played out before the cameras, and it made for compelling TV. The so-called “Outsiders” would further shock the world by convincing Hulk Hogan to turn heel and join their ranks at the 1996 Bash at the Beach, a defining moment that saw the creation of the New World Order, one of the most iconic stables in wrestling history (and one that would, in turn, give birth WWE’s own outlaw group, D-Generation X).

Riding high, Nash would exert his influence both inside the ring and out, a reign that would lead to unprecedented ratings for WCW, and some of the most infamous angles of all time, including putting an end to Goldberg’s much-hyped undefeated streak, and literally lying down for Hulk Hogan in a WCW Championship match that would forever be known as “The Fingerpoke of Doom.”

And while some have dismissed both matches as the end result of ego and backstage politics run amok, Nash sees things a bit differently.

“I guess they’re my two most controversial moments. But, if you really look at those things, Bill [Goldberg] had become the Yankees, and people wanted him to lose. If you watch that match again, I was over with the fans too. We were trying to get a heel faction to feed him, because there was really no one left for Bill to face,” Nash says. “So I win the belt, and I’m even more over when I walk out with it. Then, six days later, I go out and do the Fingerpoke. So did I do that for Kevin Nash? No. I got nothing out of it, and never talked about it again.”

In the decade that followed the Fingerpoke, Nash began to mellow, returning to WWE, repairing bridges he’d burned during his first departure from the company and working wrestling’s indie circuit. He also began to branch out into feature films, making cameos in The Punisher, The Longest Yard and Steven Soderbergh’s Magic Mike (later this summer, he’ll appear in the sequel, Magic Mike XXL.) Now, as he prepares to enter the Hall of Fame, Nash is finally beginning to look back on his career – one that played out on wrestling’s biggest stages, defined a generation and was done entirely on his own terms.

“I’m normally not a guy who lets the past define him, but it’s kind of mind-blowing to look back on it; all the people that have helped me along the way, friends and mentors – of course Shawn and H and all of those guys, but also Rick Rude, Mike Rotunda, ‘Taker,” he says. “It’s really special, and like Frank Sinatra, I did it my way. Not to let the cat out of the bag, but I’m thinking of singing a few bars of that song at my induction. I think that would be sort of perfect.”