The first time you see Idris Elba in the child-soldier drama Beasts of No Nation, he’s emerging out of the jungle brush, cutting through the middle of an army of tiny, machete-and-machine-gun-wielding tweens. Clad in a beret and an outfit that might be characterized as “military dictator summer-casual,” he strides up to the young boy at the center of this crowd and asks “Who brought this thing here?” in a booming voice. It’s a proper movie entrance, bold and brash, immediately establishing the man known only as “Commandant” as a charismatic, Colonel Kurtz-like figure. He oozes danger and power. You fear this person immediately.

The first time you meet Idris Elba when you interview him, he’s standing right behind you, having silently walking through the door and feeling no need to announce his presence just yet. You have no idea the 42-year-old actor is even there until he clasps a hand on your shoulder with a friendly “Hey there, mate,” and scans the place for a way to sneak a smoke. Clad in a buttoned-to-the-top Fred Perry polo shirt and a get-up that says, “I’m just going out to meet some folks for drinks, though I may be DJ-ing at the club later as well,” the actor displays both a vintage, Steve McQueen-type coolness and the easy excitability of one of his younger co-stars. (Elba will rarely sit for the next 30 minutes, preferring to walk around the room or act out whatever anecdotes he’s telling.) He puts you at ease within nanoseconds. And you realize, beyond a shadow of a doubt, why this gentleman deserves to be a genuine movie star.

Part patriarchal surrogate, part power-hungry psychopath and part warped casualty of life during perpetual wartime, Elba’s Commandant is the figure who leads Beasts‘ displaced young hero Agu (played by newcomer Abraham Attah) deep into the heart of darkness. Grooming the youngster to be a child soldier through desensitization, terror and fatherly affection, the character is a complicated mix of good, bad and ugly — something the actor has demonstrated a facility with in his best-known roles on The Wire and the hit BBC import Luther, just not quite to this extent. “There’s a lot of real estate in the film to hate somebody,” he says. “But anyone can play mustache-twiddling evil, you know? It’s tougher to play someone like this as a human being. Because then you can’t just dismiss that person. You have to confront him.”

Several weeks before Netflix simultaneously releases it in theaters and on its streaming service on October 16th, Elba sat down (sort of) with Rolling Stone to talk about the experience of inhabiting this character’s mindset, being sized up by a posse of prepubescents and why grown men cry when “Stringer” talks in a British accent.

You initially signed on because of director Cary Fukunaga, right?
That was a big part of the initial attraction, yeah. The man is an incredible filmmaker, but even more than that…I’ll put it this way: When you watch a film like this, on a subject like this, half of you is going, “Child soldiers, might be a little bit Hollywood…You know, in order to get a film like this made, they probably had to Hollywood it up a bit and get really sentimental.” And Cary doesn’t do that. If you’d seen his other movies, you knew that’s not how he was going to go into this.

There’s bound to be a part of the Beasts audience who are used to seeing the type of movies you just described and will wonder, “So when is the white person going to show up and guide us through this? Where’s the Kevin-Kline-from-Cry-Freedom character here?”
[Laughs] Right?!? My parents are from West Africa, and the fact of the matter is, most of the screen images you see of Africa and the characters in those films feel like they’ve been filtered through a very two-dimensional perspective. The movies essentially aren’t about Africa; they’re [in Californian accent] “Hey, this is our African friend.” Cary wanted none of that. He was determined to go after a sense of authenticity, of what it’s really like there. For the first 20 minutes or so, you’re just watching a normal African kid live his life.

Which you need to make the rest of the film work.
[slams hands down on table] Ka-boom! You need to feel what this kid lost.

So how did those two-dimensional takes on the continent affect how you played Commandant?
It made me want to humanize him more. Cary and I spoke about this endlessly. There was a lot of “Cary, I’m not sure if I should do this. I can’t make him another 2-D dictator type…” And his answer was, “We’ve seen that guy already. Now let’s see the charismatic war commander. Let’s see the guy that Agu sees as kind of hero, as a savior when he first meets him.” Think about it, this kid is scared shitless, he’s alone in the jungle, then this man comes and kneels down to him, eye to eye, and says, “I’m the group leader, who’s going to be in my group? Who’s going to be my strong boys?”

The language Commandant uses…he says, “Agu, I saved your life.” Did he? Really?!? That’s an interesting thing. He’s not saying the word kidnapped, it’s “I just saved you. You’re going to be one of the greatest soldiers in the world. Come on! You want a gun like this? Let’s go.” He’s almost like an Eagle Scout leader! There’s a lot of real estate in the film to hate somebody, especially this guy. But anyone can play mustache-twiddling evil, you know? It’s tougher to play someone like this as a human being. Because then you can’t just dismiss that person. You have to confront him.

“Most of the screen images of Africa…they’ve been filtered through a very two-dimensional perspective. The movies essentially aren’t about Africa; they’re [in Californian accent] ‘Hey, this is our African friend.'”

He’s not based on anyone in particular, is he?
I didn’t want to specifically research these kind of men or base him on anyone at all, because that would have felt like mimicking. But I did look at the common denominators in dictator-type characters: What was the thread of all of these people? How are they so successful? How did Hitler manage to do what he did? I wanted to study and understand that, and it turns out that charisma and being a sociopath are interestingly linked.

That’s an odd Venn diagram.
Not as odd as you’d think. Honestly, the biggest thing I learned is that, at some point, a child soldier decides that he’s never going home and he’s going to stay. He actively thinks, “Okay, I want to be a child soldier.” In fact, my character must have come from something similar in his life. But I don’t think we could ever quite grasp that Stockholm Syndrome aspect. These kids could have run and they didn’t. Why? Because they actually wanted to stay. You have a gun and you’re powerful. You’re no longer scared or a victim.

You’re the one pulling the trigger now.
It’s fucked up. Do you remember the naked man in the film? The guy walking beside me?

No.
Not many people remember this guy. He’s my right-hand man, in the film, and he’s like a mascot who walks around mostly naked. His name, in real life, is “Anointed.” He comes from Liberia. And he was not just a child soldier who killed someone when he was 10, he was a real-life Commandant. He was part of the boot camp, training the extras for three weeks before I got there. And I was shit-scared of him. Why? Because he just had this look in his eyes like, “I can kill you.” You know, in the movies, you’re like [in exaggerated villain voice] “I’ll get you all!” With him, there was none of that shit. It was, [in African accent] “No, man. I kill him, I cut his heart out, I eat it while it’s still beating. I’ve done that before.” And just like, simple as that. I mean, fucking hell! That was quite an eye-opener for me.

What was the experience of working with this young, nonprofessional cast like?
When I first got to the set, this kid who’s in the film — his real name is King Kong — came up to me, and he just stood right under my chest, just looking at me. [Elba affects an aggressive pose] It was that moment of him saying, “Oh, are you the leader? All right, let me see you lead then.” All of these kids were watching us. Had I shown weakness or seemed tentative, I would have been eaten alive. And I literally was like, “What are you looking at? Go on!” and just sort of waved him on. And everyone went, “Ohhhh, the Commandant is here! The leader is here now!”

They were sizing you up!
Dude, yeah! There’s a pack of wolves and then this new, bugger wolf comes in. “Hey man, we’re not actors. We’re an army. Who’s the captain? Oh, it’s you in the blue pants? Huh. Okay.” Eventually, there was this group of kids — we were called them the “Stop Nonsense” crew. The reason why they were called that is because when the other extras were just pissing about, the five guys around me would literally get up and go, [yelling] “Hey! The fucking commander is here. Sit your ass down and get in line. We’re about to shoot this.” [Laughs] It was a real interesting dynamic. 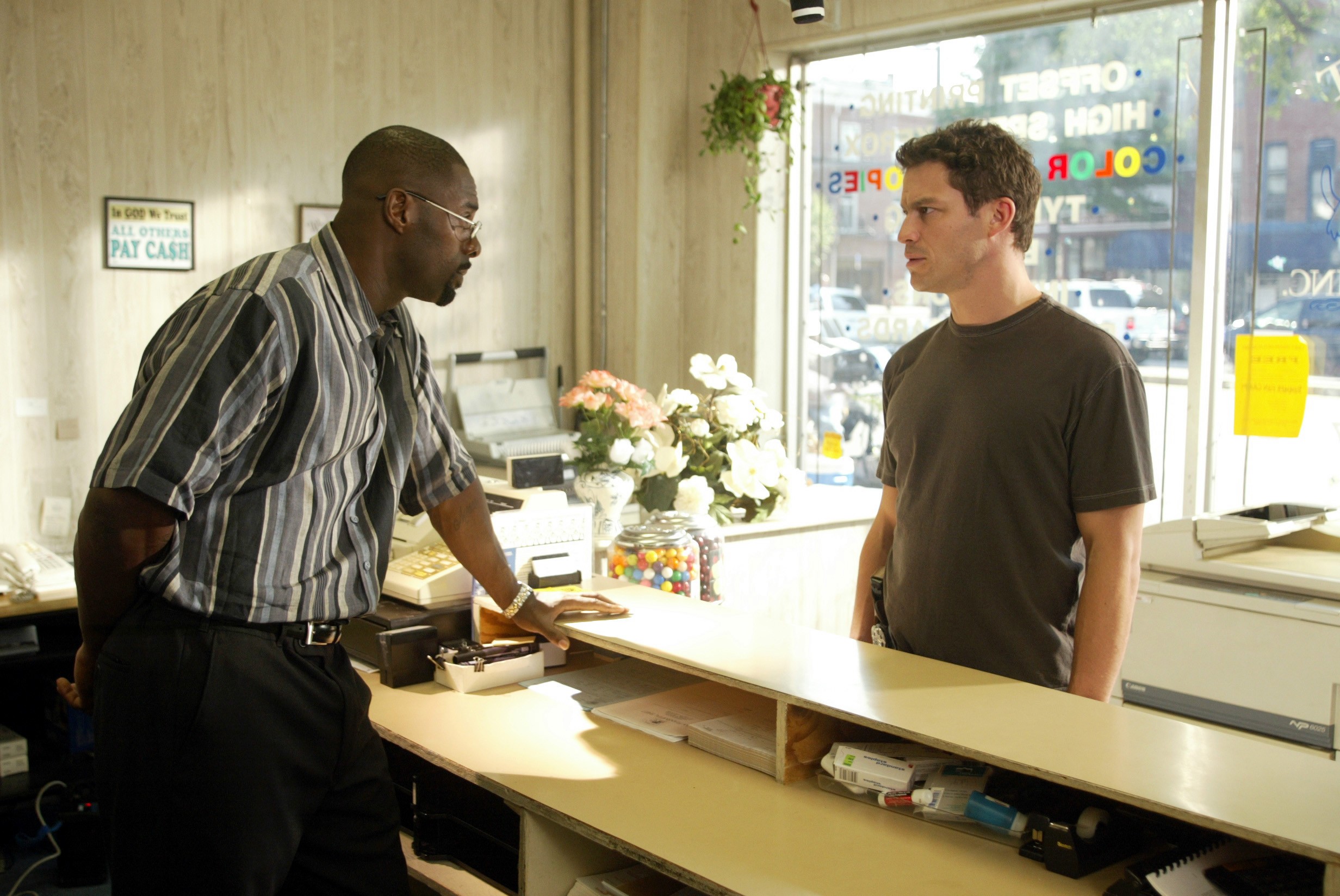 When I saw this film at the Toronto Film Festival, the first thing someone asked me afterward was, “How was ‘Luther’ in it?”
Ha! Really? [shakes his head]

Do you find that people are unwilling to let go of those roles like Stringer Bell and John Luther, even when you’re doing something that feels like a complete 180-degree turn? You’re not the first actor to deal with this, obviously, but…
Oh yeah, there’s definitely a proportion of my fan base who would not see me or accept me as anything but Stringer Bell. It’s the same thing with Luther in the U.K.; people are like, “You’re John Luther. Why are you playing this other part?” They just can’t understand. If they ever seen me rapping in a video, they’re like, [yelling] “What the fuck is this?” “Oh, that’s Idris.” “Who? The guy who plays Luther? What is he doing? Where’s his coat?” Literally, they own that character!

It’s funny, I’ll run into Wire fans — they’re all different, but I mean, some of them are real hard guys. And I’ll start talking normally in an English accent, and they literally get tears in their eyes. [In angry American accent] “C’mon, man! What…what’s happening? What did you do with Stringer, bro?!? Where is he?!? You’re fucking English, bro. You’re not tough?” [Laughs] So yeah, I do run that risk; people want the character they love. I had a little bit of hesitation around taking this role because of that, to be honest.

You were afraid that people would think you were really Commandant? I don’t think fans would approach you if that were the case.
“Are you really a pedophile African military dictator?” I mean, does Daniel Day-Lewis have to put up with that?