If you ask politely, Tom Hiddleston will show you “The Snake.” He lowers his chin, narrows his eyes into slits and gives a tight, predatory grin. “When I was working on I Saw the Light, I came across watching old footage of Hank Williams doing a duet with Anita Carter,” he says, referencing the recent biopic on the country-and-western godhead. “And Hank is looking at her like he’s about to open his jaws and swallow her whole. [Executive music producer] Rodney Crowell called it ‘The Snake.'” The 35-year-old British actor sips his coffee. “Hank just had that dark, mesmerizing power. During filming, Rodney kept looking at me and saying, ‘You’re having too much fun playing these songs. Bring the snake back out.‘”

'The Night Manager': A Cloak-and-Dagger Masterpiece

There are two Tom Hiddlestons. There’s the old-school movie star, who can play a dashing F. Scott Fitzgerald for Woody Allen (Midnight in Paris) and a compassionate World War I military officer for Steven Spielberg (War Horse). The guy with the sort of British pedigree – boarding school at Eton (where Prince William was a classmate), classics studies at Cambridge and Shakespearean training at the Royal Academy of Dramatic Art in London – that suggests a prestigious career playing historical figures. He can pronounce the word Jag-u-ar impeccably. He’s the heartthrob who inspires fans to christen themselves “Hiddlestoners,” and who, if the Internet has its way, will be the next James Bond. That’s the guy you get in The Night Manager, AMC’s new six-episode miniseries based on John le Carré’s 1993 bestseller that finds Hiddleston playing a spy who infiltrates an arms dealer’s inner circle – as stellar an audition for 007 as you could ask for.

But then there’s the unpredictable, borderline weirdo version of Hiddleston, the one who does impromptu weather reports at local news stations as his Avengers character Loki, impulsively re-creates the Robert De Niro/Al Pacino diner scene from Heat on a talk show while sitting on a couch with De Niro – “I remember thinking, ‘Why the hell am I doing this, I hope he doesn’t hit me.’ Especially since my Pacino was a lot better.” – and watches forensic experts cut open cadavers for research. “There’s a disconnect between who I am and who people expect me to be because of my background,” Hiddleston says. “And I feel compelled to be rebellious and go against that.”

It’s that second Hiddleston you see in High-Rise (hitting theaters on May 13th), an adaptation of J.G. Ballard’s 1975 cult novel about life in a dystopic luxury-apartment building. Hiddleston’s buttoned-up doctor buys into an ultra-modern residential complex for the upwardly mobile. Working his way up to the penthouse, his character starts to lose his civilized manner – and that’s when things get nasty. Like James Spader, the actor has found a niche somewhere between charismatic and creepy. Not every leading man could pull off an opening sequence in which he BBQs a dog while wearing a bloody designer suit. Hiddleston practically makes it sexy. “People want to put their best face forward,” he says, “and when you peel that face back, you see a lot of turbulence. It’s not like I think society is one disaster away from orgies and eating household pets. But that’s the most interesting thing to me: what’s going on outside versus inside.”

“There needed to be a certain charm in how this guy is played without letting him off the hook.,” says High-Rise‘s director and co-writer Ben Wheatley. “Tom immediately got that. He’s so fucking handsome — and he was willing to watch corpses being cut open to get into character. I wouldn’t do it in a million years. He did it in a second.”

“To be fair, I only watched one autopsy being performed,” the actor sheepishly says when the experience is brought up. “My character is a pathologist, so I needed to make sure I was getting it right. And you can tell a lot about a person by how they remove someone’s brains.” 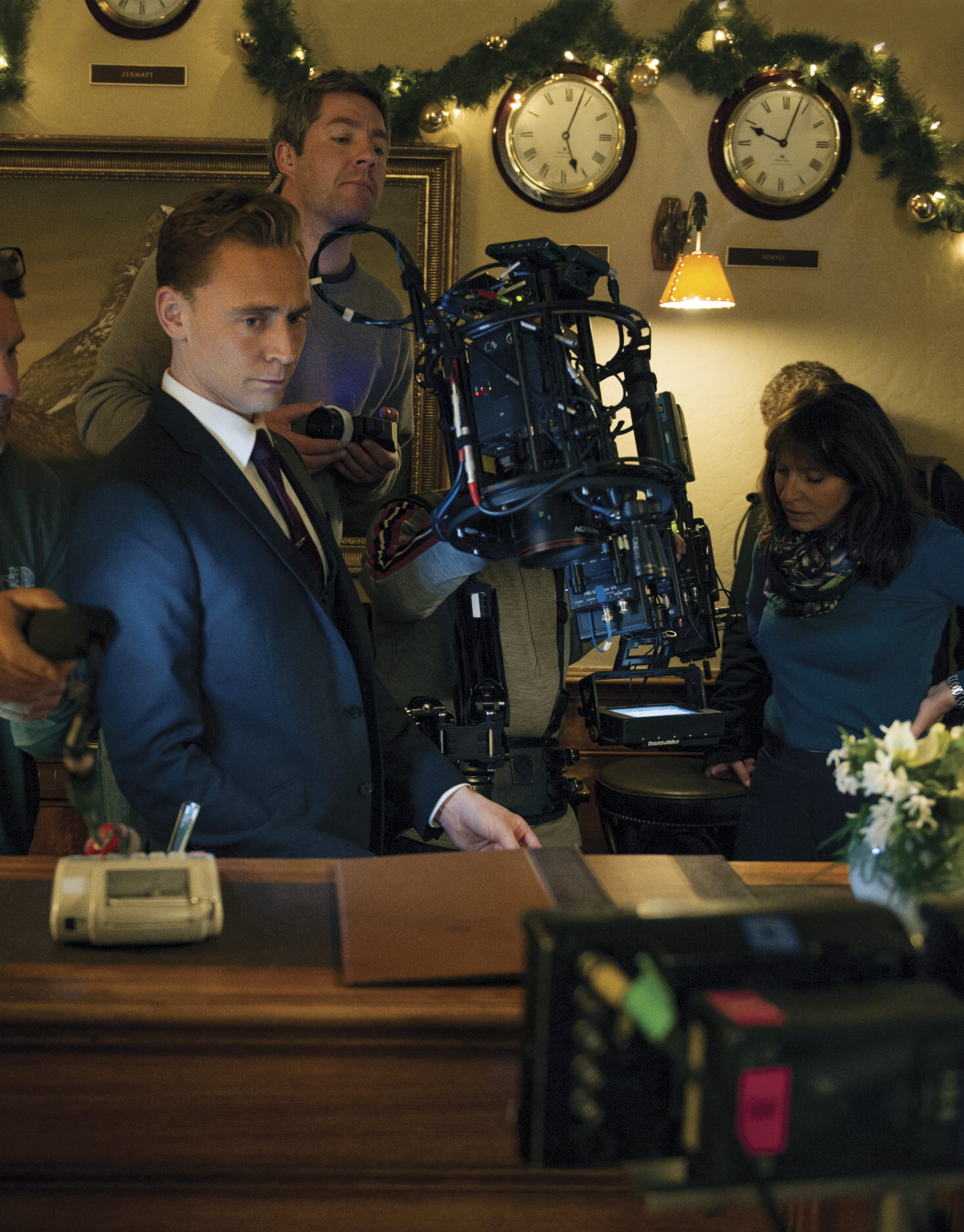 Even in The Night Manager, which finds him in a more traditional mode, Hiddleston adds darkness to his espionage action hero. After a murder occurs at the swank hotel he manages, his ex-soldier hero is recruited by British intelligence to help bust Hugh Laurie’s aristocratic gunrunner. Watching Hiddleston gracefully play a classic, complex and often shirtless leading-man part like this, you wonder why he doesn’t already have a license to kill. His character must also pretend to be a thug, however – “There’s a psychopath lurking in there,” his handler observes, “I want you to find him and scare the shit out of everyone, and that includes me.” (Spoiler alert: He does) — and by the miniseries’ end, he’s completely cracked his moral compass.

“The question is: Which one is the real him?” Hiddleston asks. “He’s a righteous, angry character, and that’s what I connected with, which may be saying too much. Le Carré describes him as” — he quotes the passage off the top of his head — “‘a collector of other people’s languages, self-exiled creature of the night and sailor without designation.’ I read that to my sisters and they both went, ‘Tom, that’s you!'”

Asked whether he prefers playing sexpot oddballs or multiplex heroes, Hiddleston refuses to settle on one specific kind of role. He’d love to work on some “twisted” art-house movie again; first, however, he’s reprising his supervillain, Loki, in Thor: Ragnarok, and starring in a revisionist update of the classic giant-ape-meets-girl story, Kong: Skull Island. (He claims that he can’t say much about the latter project, except that it’s “a new reimagining of the Kong myth … and I can confirm that [costar] Brie Larson is not playing Kong.”) He’s apt to veer from an in-depth discuss of Othello — he played Cassio in a production at the Donmar Warehouse years ago — to giddily quoting a multiplex blockbuster; his Night Manager costar Laurie remembers that, when they started discussing the relationship between their characters, “Tom kept going back to Crimson Tide. He kept saying he was Denzel Washington and I was Gene Hackman. I actually ordered us both USS Crimson Tide baseball caps when the production wrapped. They should be arriving any day now.”

“In fact, I was just telling someone how much I love Furious 7,” he says, laughing “and they said, ‘Are you kidding me?'” Hiddleston suddenly puffs himself up and adopts a gruff, Rock-like cadence. ”Dwayne Johnson flexes his arm, breaks open his cast and then says, ‘Daddy has to go to work’ – if you don’t love that, I don’t know how I can appreciate you as a human being.” He smiles the snake smile for a split second, and then it’s gone.