How 'This Is Us' Became a Surprise Breakout Hit - Rolling Stone
×
×

Hoisting his Emmy for Outstanding Lead Actor in a Drama Series, Sterling K. Brown couldn’t help but grin and tip his cap to some of the popular cable antiheroes who have dominated the category over the past decade: “This one right here, when I think about it? Like, Walter White held this joint! Dick Whitman held this joint!”

Brown’s no stranger to prestige drama himself, having snagged a statuette for his work in FX’s The People vs. O.J. Simpson last year. But no one would have predicted a year ago that he’d be receiving an award for This Is Us, a broadcast family series from creator Dan Fogelman (Galavant) centered around three siblings – fraternal twins Kate (Chrissy Metz) and Kevin Pearson (Justin Hartley) and their brother Randall (Brown). The latter was abandoned at the hospital the same day the siblings were born; he was then adopted by their parents, Jack (Milo Ventimiglia) and Rebecca (Mandy Moore). Ping-ponging between four different timelines – from the mid-Seventies to the present day – the show follows Kevin as he tries to go from selfish sitcom star to “serious actor” and Kate, overweight and stuck working as her brother’s personal assistant, as she tries to make some serious life changes. As for Randall, his world is turned upside down when he meets his birth father after 36 years and learns the man is dying of cancer. There are screaming fights, broken hearts, alcoholic relapses and deathbed confessions. Are you getting misty yet?

When the show debuted on NBC in September of 2016, many people assumed it was just another drama destined for the television graveyard, buried next to so many other ambitious and formulaic victims of the premium-cable/streaming service era. When its second season premieres on September 26th, however, This Is Us will return as an Emmy-winning, star-minting, bona fide fan favorite and a major feather in the Peacock network’s cap. How did we get here? How did a primetime tearjerker become such a massive, beloved, runaway hit in the age of Peak TV? We have a few ideas.

Peak TV Filet Mignon vs. Primetime-Drama Burger
Even with its somewhat unconventional storytelling, This Is Us is familiar and hearty, the network TV equivalent of comfort-food – and there’s no doubt it benefited from hitting the airwaves during the tail end of the 2016 election season through Trump’s first few months in office. We live in harrowing times, where even the dystopian hellscape of something like The Handmaid’s Tale feels a little too familiar and close to home. And while the latter was rewarded handsomely for tackling political and social issues head-on, sometimes you just need an escape from the weight of the world – a simple, mushy family drama you can flick on for maximum waterworks. This Is Us fit the bill beautifully: a melodrama with twists, turns, emotionally overwhelming encounters and heartwrenching moments of sorrow. The opportunity for a collective, cathartic cry was in demand; Fogelman’s show provided the perfect supply.

Tears still have to be earned, however. While viewers wouldn’t be transformed into weepy messes every week without the show’s skilled writers, a lot of the credit goes the show’s extremely smart casting. Veterans of teen drama, Mandy Moore (A Walk to Remember) and Milo Ventimiglia (Gilmore Girls) are now playing parents – they’re aging with their fans – and add charm, along with a little PG-13 sex appeal (more folks knew that Ventimiglia showed his butt in the pilot than knew about the show itself). And the ensemble cast is rounded out by performers with obvious chops like Brown, Ron Cephas Jones as Randall’s cancer-stricken birth father and veteran TV actor Gerald McRaney as the doctor who delivers both babies and life lessons in the show’s flashbacks. All three wound up with Emmy nominations this year, along with Metz and Ventimiglia, and deservedly so; their scenes on the show pack as strong an emotional punch as anything in the Pearson siblings’ or their parents’ storylines.

That said, Moore and Ventimiglia more than hold their own, so much so that it’s only mildly distracting when the 32-year-old Moore throws on a gray wig and portrays a 66-year-old version of her character. But while bringing in an older actress might make more sense visually, it wouldn’t feel right. Chemistry is particularly essential on a family drama, and it’s one of the show‘s greatest strengths. Whether it’s the obvious fire between Mom and Dad in their flirty Ford-era flashbacks or the more tender moments with Moore and the “Big Three” triplets in the present-day scenes, the cast clicks on all levels. We buy them as a family. 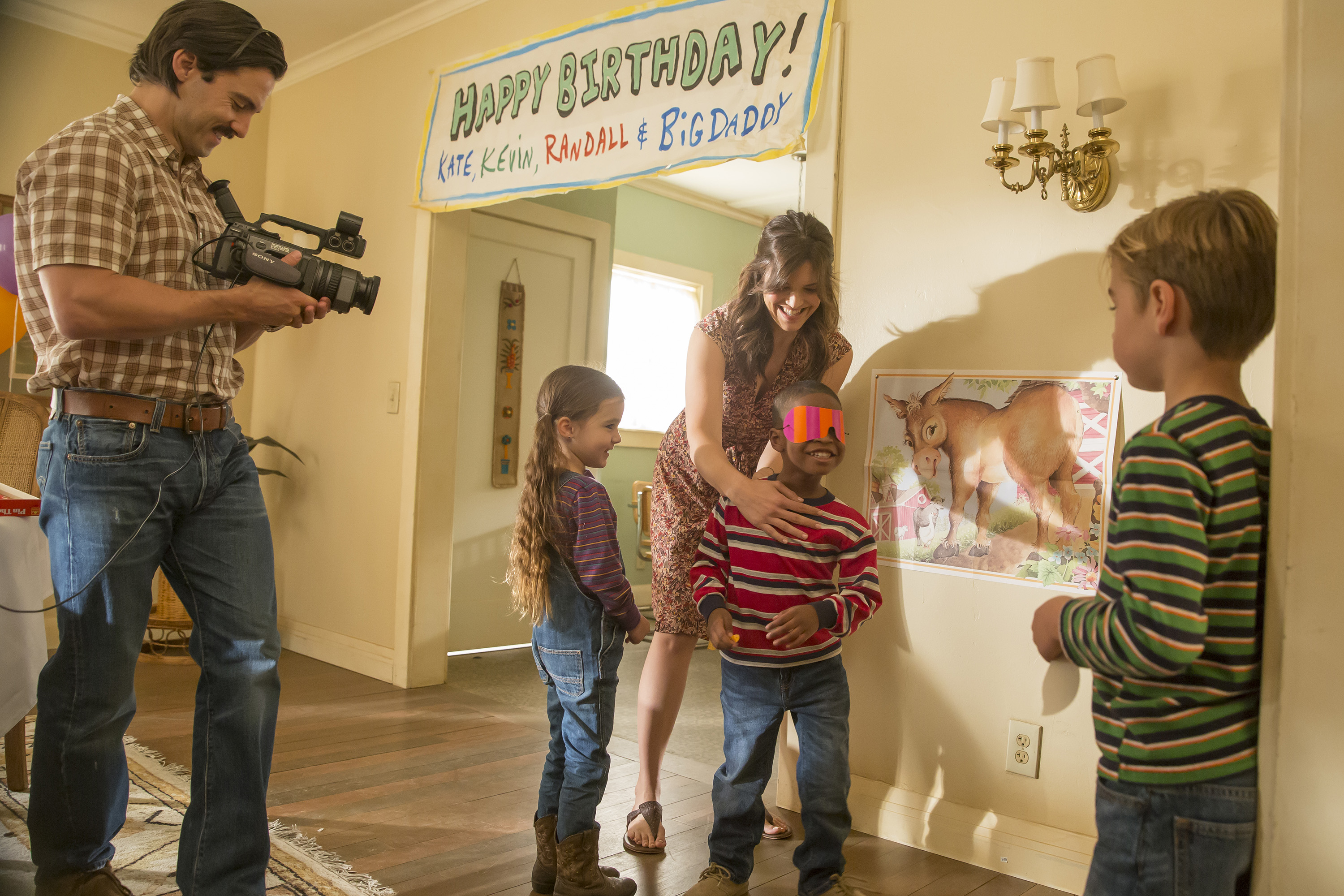 This Is Us … Is Us
There’s no disbelief to suspend here. We’re not watching Russian spies or drug kingpins or zombies; there’s no one flying around on a dragon. Surrounded by a sea of extraordinary characters on cable, This Is Us presents us with regular – in fact, almost aggressively regular – people. Their struggles (weight, job-related stress, feelings of inadequacy, grief following the death of a loved one) are things nearly everyone has dealt with at one point or another, and as such, they’re deeply relatable. Their dreams get put on the backburner and don’t always come true. We watch them fail and we empathize.

In fact, those failures may be another big part of why the NBC series is succeeding: They’re proof that it’s self-correcting as it goes. In the first half of Season One, Jack is, frankly, a little much – a saint, a perfect husband and father, able to just up and quit drinking cold-turkey in one episode at his wife’s behest. He’s just unrealistically flawless in general – an image that’s then shattered in the final few episodes of the season, when he relapses and transforms into the TV-dad version of a Springsteen song. We learn about his sketchy past and his cold, alcoholic father. We watch him get into a drunken bar fight and reveal himself to be kind of selfish and controlling of his spouse. After a legendarily harsh fight, the pair agree to separate. Similarly, Rebecca was criticized early on for being no more than a vessel for all of Jack’s adoration. Then, towards the end of the season, we learn more of her backstory and the character gets a lot more fleshed out. Suddenly, Rebecca is standing up for her independence as a woman, and insisting she needs more than just her family to feel fulfilled as a person.

She wasn’t the only female character on This Is Us in need of some added depth. Her daughter Kate’s story was criticized for being too weight-centric at the beginning and adhering to a stock storyline template for plus-sized female characters on TV (their need to lose it, how others treat or perceive them because of it, etc). The show addressed the matter, then quickly shifted focus to her guilt over her father’s death and her love story with Toby (Chris Sullivan), a man she met in a weight-loss support group. They both struggle with their size, sure, but it’s no longer the duo’s defining characteristic; by the season’s end, we’re watching them working through commitment issues and getting engaged.

Filling the Parenthood Gap
Kate and Toby also bring some comic relief to the show, and their quippy banter feels reminiscent of the fast-talking Braverman clan from NBC’s previous family drama, Parenthood. When that cult favorite went off the air in 2015, it left a distinct hole in the network’s lineup – and while This Is Us isn’t exactly Parenthood 2.0, it has enough similarities to fill the gap. Both shows revolve around three generations of a large, loving family that includes members of different races or backgrounds, as well as at least one LGBTQ member, adopted family member and overly uptight adult son. And both involve the passing of a patriarch.

Still, Jack’s death has managed to differentiate This Is Us from its network predecessor and other more procedural family series by giving us a mystery to follow. The writers drop in clues and a few red herrings (if you weren’t convinced he was going to die in a drunk-driving accident in the season finale, congratulations, you may know something that we don’t). But we still don’t know how he died or how Rebecca winds up married to his best friend Miguel going into Season Two – and fans will likely keep tuning in to find out if their theories are correct. In keeping his cause of death a secret, the show suggests there’s more to be revealed about his character. It’s less “Who Shot J.R.?” and, to reference Brown’s Mad Men Emmys shout-out, more “Who is Dick Whitman?”

Risk Yields Rewards
Playing the long game with its main character’s past is not the only similarity between This Is Us and its peak-TV competition, either. It takes risks that few network shows are willing to take, starting with the fact that Ventimiglia’s bare ass is one of the first things we see in the pilot (only one of a handful of naked male posteriors, it should be noted, to ever be shown on broadcast TV). And it’s not just nudity: This Is Us tackles stories and characters that most primetime series routinely avoid. The handling of Metz’s character stands out in particular; the idea that she is a three-dimensional woman with career aspirations, or that a plus-size woman would feel desire and be sexual (and sexually desired by more than one man on the show) is almost unprecedented on TV – broadcast or cable.

And through the character of Randall, the show explores race in a unique way, depicting his experiences as an African-American boy growing up part of a white family in the 1980s, as well as his parents’ clunky attempts to connect him to his culture. It doesn’t simply relegate racism to the past, either – the show is careful to address it in its contemporary timeline, when Randall’s birth father William, recently taken in as a houseguest by his grown son and his wife, goes for a walk through the couple’s wealthy neighborhood. Soon, the neighbors are calling the cops on him for loitering.

What We’re Craving
But despite being somewhat bolder than its network counterparts, This Is Us never pretends to be something it’s not. It leans into sentiment and simplicity, finding beauty in everyday life in an era of where doing so is decidedly uncool. Have we come full circle, to a point where a primetime network drama feels edgy for simply daring to exist? Are we hungry for something other than the latest peak-TV copycat?

Ironically, we can turn to cable for an answer – not to Mad Men’s Dick Whitman or his alter-ego Don Draper, but to Peggy Olson pitching Burger Chef as an escape from the horrors of the Vietnam War. “The news wins every night,” she says. “And you’re starving. And not just for dinner. …There may be chaos at home, but there’s family supper at Burger Chef.” This Is Us is not a prestige TV steak. It never tries to be. It knows right where its wheelhouse is and stays firmly within it – a satisfying family supper at Burger Chef amid the chaos.