Maybe you tuned in for the nostalgia factor, basking in the way a half-decade’s worth of pop-cultural raw material and fortysomething geek touchstones were deftly turned into an I-Heart-the-’80s mixtape. Maybe you dug the way the first season mined an old-fashioned thrills-spills-chills feeling that left the multiplex eons ago. Maybe you were just curious to see what happened next in this oddball story of psychic kids, government spooks, bad scientists, mirror-image dimensions, monsters and a magnificently stressed-out Winona Ryder. Or maybe, because Stranger Things was 2016’s unescapable hit du jour – falling somewhere on White Noise-ometer above Westworld‘s existential dread but below Game of Thrones‘ dragontastic escapism – you simply had to watch it for fear of being stranded in an Upside Down where everyone’s talk of demogorgons and David Harbour’s dad-bod drew blank stares.

Whatever the reason behind your binging of Stranger Things 2 last weekend, it almost assuredly wasn’t because you expected a strong, compelling teen drama. Yes, the Duffer brothers’ “sequel” – such commitment re: this Eighties thing! – to their out-of-the-blue smash Netflix show doubled down on the references, homages and sci-fi/horror/Spielberg scrapbooking. It added some new folks (out with the Barb, in with the Bob) and threw in a few Seventies movie callbacks for good measure. It has given us a Goonie in the mist and the most facepalm-worthy TV punks since Quincy visited an underground club. But breaking through the pastiche surface of bad hair, vintage blockbuster nods and Reagan-era wink-nudges, there’s a story of kids negotiating a rocky, often traumatic path through adolescent growing pains that grounds the throwback jukebox aspects. Come for the Stephen King font. Stay for a Stranger Things that smells surprisingly like teen spirit.

[We’re going to assume that, given modern TV viewing habits and the fact that a week has passed, you’ve seen the new episodes and know where things end up. If not, stop reading, go finish the show and we’ll see you on the flipside.]

Picking up almost a year later from when we last left Hawkins, Indiana, the second season joins our quartet of “party” members with puberty already in progress. It’s 1984 – Ghostbusters, Dig Dug and BMX caravans still loom large in these kids’ lives. Like the actors who play these ordinary teens in extraordinary circumstances, however, our heroes seem noticeably older. (Both Caleb McLaughlin and Finn Wolfhard, who play Lucas and Mike, look like they’ve each grown six inches over the past 12 months; congratulations, Gaten Matarazzo’s Dustin, you now have front teeth.) They’ve been through some shit, especially Will, who keeps slip sliding into the Upside Down and seeing a giant shadow monster looming over the town. Still, their preoccupations are basically the same, only now with girls – and a sense of self-consciousness that accompanies these boys taking a more focused interest in them – penetrating their young male nerdosphere. That, and a “pet” who looks like a xenomorph zygote and goes full Gremlins-after-dark on them. 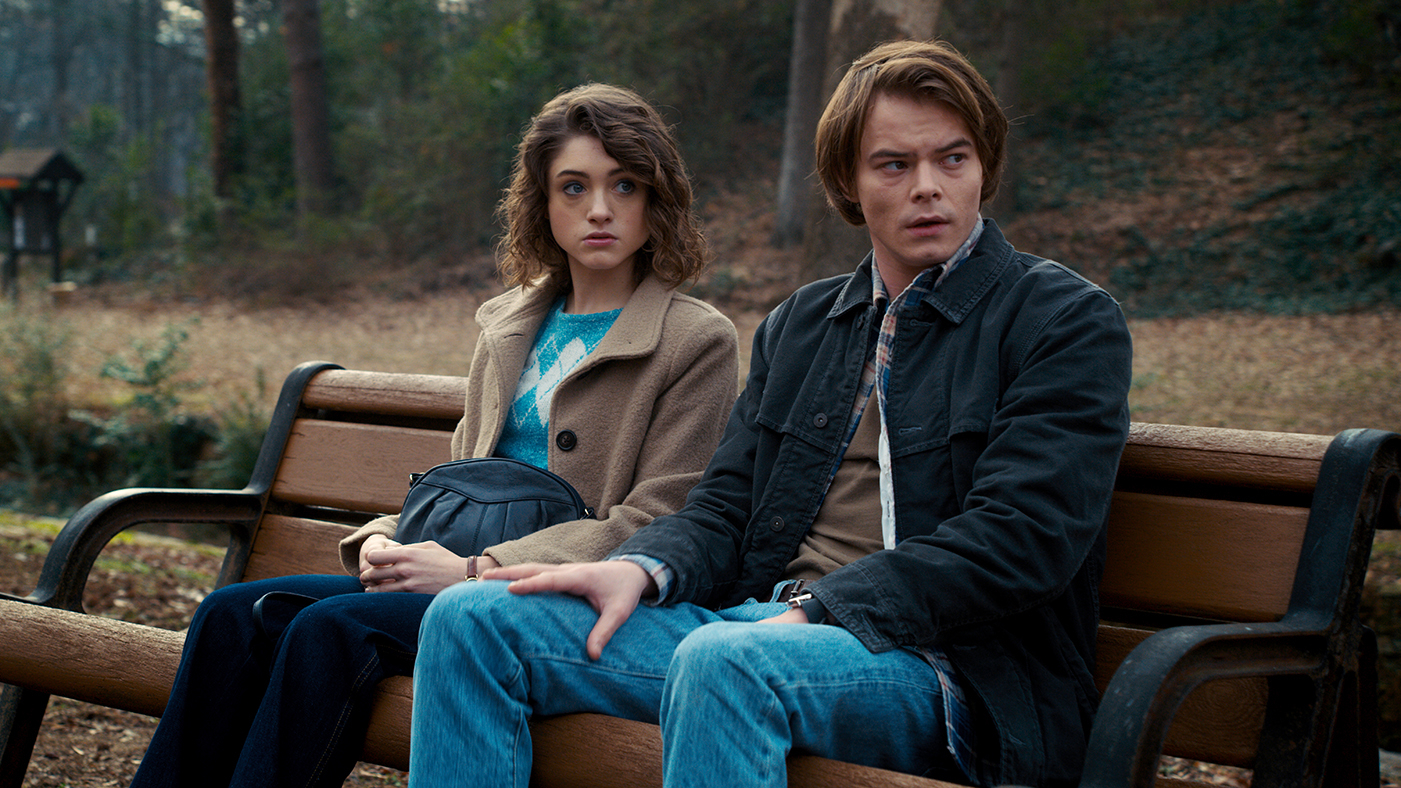 As for the series’ older youngsters, Nancy Wheeler (Natalia Dyer) and Jonathan Byers (Charlie Heaton) get their own joint subplot with a conspiracy theorist and intelligence-agency goons, and Steve Harrington (viva Joe Keery!) gets both a hesher nemesis and even better hair. And then there’s Eleven, Millie Bobby Brown’s weaponized waif who also gets a ‘do upgrade and wisely remains the sun around which the show revolves. The telekinetic heroine is the most identifiable and beloved character of the bunch, and not surprisingly, Eleven gets the juiciest narrative strands. She starts by emerging from the Upside Down’s birth-canal portal, and ends Season Two after meeting her real mother, hanging out with a fellow power-wielding female, bumpily bonding with her surrogate dad and reuniting with her crush at a school dance. In the spirit of Eighties references about the strongest storyline, this one goes to … well, you get the picture.

But the big difference between the show’s inaugural season and its follow-up, besides the much hotter spotlight Stranger Things 2 is steeping into, is the fact that this second outing foregrounds the more human elements of the plot in a way the largely prepubescent Version 1.0 didn’t. Specifically, it starts using the teen drama aspects of a tale involving kids ranging from roughly 13 to 18 years old in a way that strengthens and, as critic Rob Sheffield notes, deepens and darkens the episodes. Having lost the shock of the new, it now relies even more on the older, somewhat more mature kids to carry the narrative weight; it’s as if the Duffers suddenly woke up to the fact that they now have a crack cast of under-21 performers who no longer have to be little more than Spielberg moppet stand-ins.

So, yes, maybe the scenes that stay with you are the DemoDog frenzy or the shot of the Shadow Monster invading Will through every available point of entry, as genuinely unnerving an image as anything on TV this year. But for us, the first moments that come to mind several days after finishing Season Two are the ones that throb with recognizable humanity: the psychic tantrum argument between Sheriff Hopper and Eleven that plays out like every Parent v. Teen power struggle; Lucas and Dustin jockeying for the new-girl-in-town Max’s affections, especially when the latter shows the first hairline fractures of heartbreak; the motel conversation between Nancy and Jonathan, and their later answer to the will-they-or-won’t-they question; Dacre Montgomery’s stoner Billy raging impotently against his abusive dad; Steve giving Dustin ladies-man advice on hair care; a post-posessed Will confused and scared over what the hell is happening inside of him. (Those Will scenes are like a portrait of adolescent hormonal assault taken to fantastic extremes – a PG-13 body-horror version of puberty.)

We should probably talk about the mohawk-sporting elephant in the room: “The Lost Sister,” Stranger Things 2‘s seventh episode. Sigh.

I am not convinced the English language contains the words necessary to describe how bad the 7th episode of Stranger Things 2 is.

We’re not here to bury or to praise what is inarguably the most divisive episode of the show to date, or debate whether that central-casting band of Reagan-era ragamuffins are meant to be taken seriously or as caricatures of every PSA-ready punk rocker that graced Eighties media. (Folks far more eloquent than us have already gone righteously carnivorous on it.) What we will say about Eleven’s trip to meet up with her psychic comrade and some goofy-ass delinquents is: Keep your eyes on Millie Bobby Brown’s eyes. It’s a testament to this young actress, whose performance has not lacked for praise but is still the show’s not-so-secret weapon, that she saves the series in its darkest hour. Watch how Eleven responds to talking with someone who finally gets what she’s gone through. Or how she reacts to realizing that she has more power than she might have imagined. Or the sense that, after she gets her bad-seed makeover, she gets to try on a new identity before shedding it for the next one.

There’s a real teenager, one full of angst and joy and high on some joyriding rebellious-phase fumes, stuck in this very-special-episode misstep that no amount of pulpy processed cheese can smother. And by the time you get to the John Hughes finale, in which the school’s winter dance ties up numerous loose ends, you realize that Stranger Things 2 has not only been crafting a story about kids fumbling through and finding their way into young adulthood, but that those parts feel more interesting than any Upside Down, et al. shenanigans. The use of “accidentally” in the headline is a bit of a feint – it’s hard to say whether or not the Duffers & Co. thought they needed to gird their spot-the-reference game with something a tad more substantial this time around. Still, if the second season has anything on the first, it’s that these characters now feel less like they stepped out of E.T. outtakes and more like the actual teens who were in the audience watching it and dreaming. As the actors get older, the show might even push those elements even further for Chapter Three. Stranger things have happened.