“Most second albums suck,” Dan Harmon says, lounging in a back room of Starburns Industries, a Burbank studio, across the table from Justin Roiland. The mismatched pair — Roiland is clean-cut, fair-skinned and upbeat; Harmon’s unkempt, grizzled, and cynical — are in the midst of creating not a second album here, but a second season. The show is Adult Swim’s Rick and Morty, an animated sci-fi sitcom that’s very loosely based on Back to the Future and just may be the best-written comedy on television.

Each 22-minute story arc is plotted using the principles of Joseph Campbell’s mythological hero’s journey, but shot through with world-weary humor like a George Carlin comedy special in triple time. In just 11 episodes, the show has amassed a sizable cult following of devotees, with nine million people watching the show’s first season. Among them is Matt Groening, who recently had Roiland and Harmon create a Rick and Morty couch gag to introduce this season’s finale of The Simpsons.

Rick and Morty chronicles the inter-dimensional adventures of an alcoholic, misanthropic scientific genius (Rick) and his big-hearted, dim-witted, chronically nervous grandson (Morty). The show combines the meta-TV writing of Harmon, best-known as the creative force behind the erstwhile NBC sitcom Community, and the puerile imagination of Roiland, best known as the screeching voice of Lemongrab on Cartoon Network’s Adventure Time.

With Rick and Morty finally resuming after a 15-month gap, Roiland, who also voices the stuttering, exasperated titular characters, is understandably nervous. The first new episode, he confesses, “was just brutal and it broke us to a certain extent. We were so close to something amazing and we never really got there from a structural standpoint.” 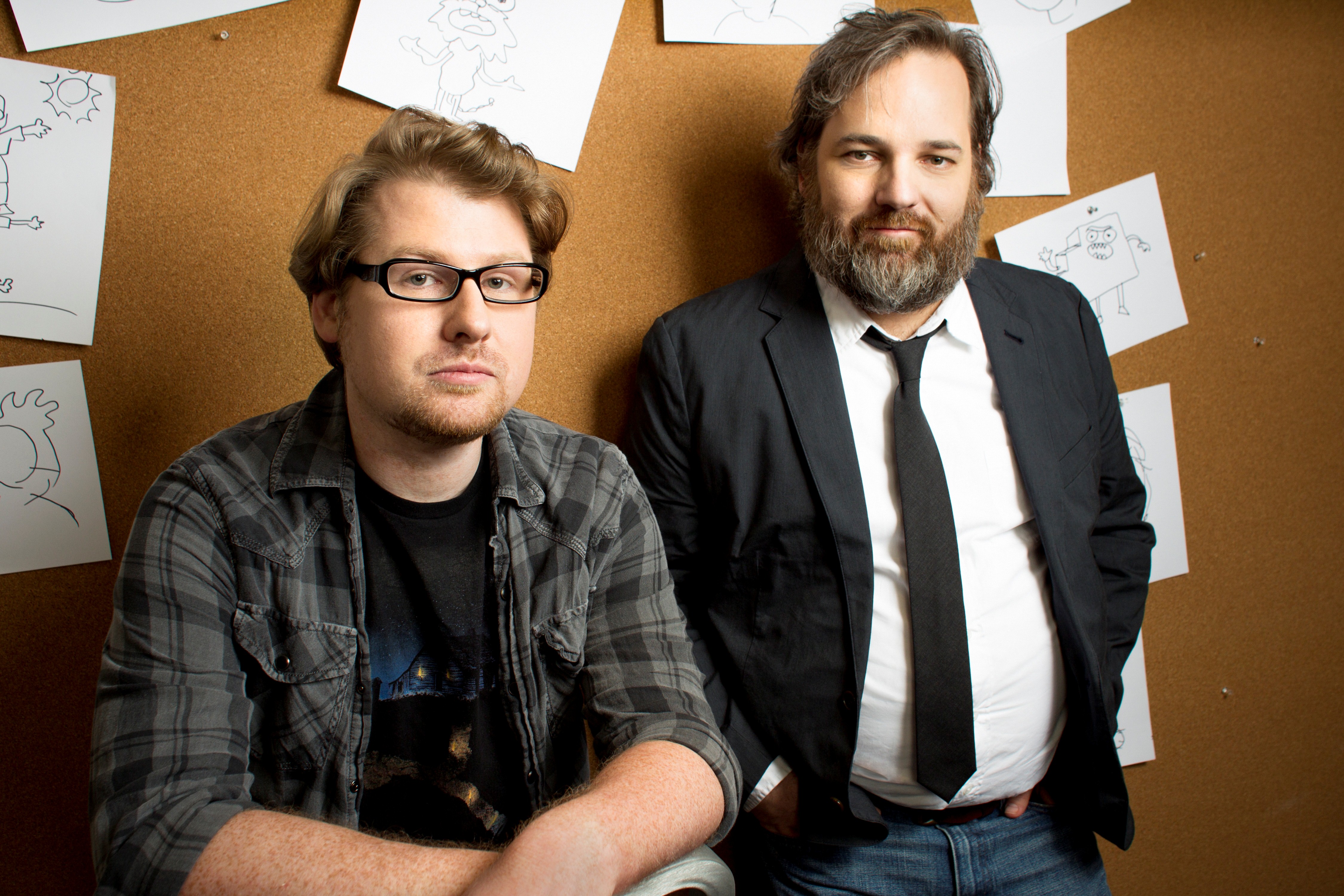 “It went off the deep end conceptually and got really over-complicated,” Harmon agrees. “We’re pretty convinced that the first episode might be the worst for that reason.”

If the first episode of Season Two is the worst, then the pair has nothing to worry about. “A Rickle in Time” begins with Rick freezing time for six months so that he, Morty, and Morty’s sister can clean up the house after a wild party that ended Season One. But due to an unforeseen complication, time keeps splitting into multiple simultaneous realities. This is depicted by dividing the viewer’s television screen into as many as 24 tiny frames, each with a slightly different version of the protagonists working to repair the widening rift.

If this seems hard to follow, then welcome to the Michio Kaku world of Rick and Morty. “I consider it my job to service the insanity,” Harmon says, referring to Roiland. “I love the idea of serving the crazy guy instead of being the crazy guy.”

Harmon has a reputation, be it deservedly or undeservedly, as a difficult genius. He’s one of the few people who can create a great show, then get fired despite the high quality of his work, as he did from The Sarah Silverman Program on Comedy Central and Community on NBC — which later hired him back, then canceled the show. “I forget my pain,” Harmon says. “I just move from one thing to the next.  If I remembered my pain, I’d stop working.”

Like South Park before it, Rick and Morty was never intended to be anything more than a one-off project. Its origins lie in a monthly short-film festival called Channel 101 that Harmon co-founded. “I had a history of occasionally going into Channel 101 with something that I made with the intention of just eliciting shock and screams, and this was certainly one of those times,” Roiland recalls of the original short, The Real Animated Adventures of Doc and Mharti, in 2006. “I’d just gotten off a job [at Spike TV] that was creatively horrible. So I had this pure ‘I don’t give a fuck’ energy, which is sometimes the best energy because you have nothing at stake.”

“Ed Norton says in Fight Club, ‘I felt like destroying something beautiful,'” Harmon interrupts. “For Justin, that was Back to the Future.‘”

Roiland continues: “There’s a part in [the short] where Mharti is disappearing and Doc says, ‘You have to jerk me off to stop it,’ and this huge, beautifully drawn erect penis appears. I couldn’t have been happier sitting in a theater with 300 people and hearing this massive swell of a reaction. It was one of the highlights of my life.”

It may come as a shock, but with this sensibility, Roiland had trouble getting his shows on network television. He’d had moderate success working on two Dan Harmon creations: The Sarah Silverman Program and a very-short-lived VH1 sketch show called Acceptable TV. But other than those, for a good 10 years, Roiland pitched network executives non-stop, selling, by his own count, three shows to Fox and three to Cartoon Network that never got picked up. “Observing Justin having project after project killed was really painful,” Harmon recalls. “He literally said to me, ‘I don’t know how much more of this I can take.'”

So when Adult Swim asked Harmon to put together an animated pilot, he decided to work on making Roiland’s humor palatable to a broader audience. “The challenge was: How do you make my mom understand how funny it is to see somebody vomiting diarrhea,” Harmon explain, then adds, glancing at his partner, “Not to pigeonhole Justin’s sensibility.”

Harmon’s solution was to contain that energy in the character of Rick, and place him in an otherwise stereotypically dysfunctional television family. Rick, Harmon elaborates, is modeled on the idea of The Cat in the Hat, who bursts into the ordinary world and creates havoc.

Although this formula has worked far beyond its creator’s expectations, Roiland still has a way to go before reaching his personal benchmarks for success. One involves seeing a bootleg t-shirt on Venice Beach of Rick smoking a joint. The other, going to a comic convention and seeing a man and woman dressed as Rick and Morty making out. “I did see a dude Rick and a girl Morty in Austin and asked them to make out,” he admits. “But they looked at me funny and told me they were cousins. So that’s still my white whale.”