Now that Netflix’s latest nostalgia-fueled reboot, Gilmore Girls: A Year in the Life, is here – and if you’re reading this, you’ve presumably binged all six hours of the new series over the holiday weekend – we have just one thing to say: Oy, enough with the poodles already.

Just kidding. But the revival of the beloved early-aughts dramedy is destined to be discussed, dissected and debated for the foreseeable future, especially when you consider that it ends on one hell of a cliffhanger. (If you haven’t seen the whole thing, stop reading now; here there be spoilers, and plenty of them.) At the end of it all, daughter Rory (Alexis Bledel) reveals to her mother, Lorelai (Lauren Graham) that, via those highly hyped, endlessly teased final four words, that more Gilmores may be on the way: “Mom?” “Yeah?” “I’m pregnant.” Then the screen cuts to black. While the other characters get satisfying endings – Lorelai and Luke finally tie the knot, matriarch Emily (Kelly Bishop) finds her independence after her husband Richard’s death – Rory’s next act is left tantalizingly open-ended.

10 Things You Need to Know About Netflix's 'Gilmore Girls' Revival

Part of the reason that this new series exists at all is because the Gilmore Girls creator, Amy Sherman-Palladino left the show before its seventh and final season, leaving fans clamoring for the ending that she truly intended. Those final four words have achieved near-mythic status among fans, inspiring breathless thinkpieces (both before and after the revival started streaming) about what they might be, what it said about the series as a whole and What It All Means. Now we’ve got the ending the showrunner had envisioned since the series’ early days.

The question now is: Was it worth it?

The Netflix reboot picks up right where the series left off, even though eight years have passed. Lorelai and her longtime boyfriend Luke (Scott Patterson) are still together; he’s got his diner, she’s got the Dragonfly Inn, they’re still living in Stars Hollow. Rory is working as a journalist, albeit one who seems to have absolutely no idea how to actually be a journalist. Emily is still Emily, attending DAR meetings she and still has no idea how to have a healthy relationship with her offpsring – a two-way street of mother-daughter dysfunctionality that leads to one of the reboot’s best moments, a fight with Lorelai in the first installment, “Winter.”

But one key component is missing: family patriarch Richard, who passed away suddenly four months before the events of A Year in the Life. (In reality, Edward Herrmann, who played Lorelai’s father, died of cancer in 2014.) His death hangs over the series like a dark cloud, and to the creative team’s credit, it’s not merely brushed off as a thing that happened, now everyone has moved on, etc. Richard’s absence, and the three Gilmore ladies’ processing of it, is the catalyst for much of the revival’s drama, which takes place over the course of a year (see subtitle) and devotes one 90-minute mini-movie to each of the four seasons.

In the service of fan service – and, perhaps, to fill out those super-sized episodes – Sherman-Palladino devotes too much time to bits and characters that maybe didn’t need it. For instance: The Stars Hollow musical, a ridiculous diversion concocted and ably performed by Sutton Foster and Christian Borle, is very, very funny … and goes on way, way longer than necessary. Kirk’s Ooo-ber business – a rip-off of the ride-sharing service, in which customers call the town misfit’s mom and he picks them up in a beat-up jalopy with holes in the floor – showcases the character’s oddball charm, but it grows stale quickly. (A Second Film by Kirk, however, is a call-back to the original series that is extremely welcome.)

Even worse is the appearance of the the Life and Death Brigade, a secret society that’s basically a more privileged, often-soused version of Yale’s Skull & Bones. In “Fall,” the group’s chief rabble-rousers appear, along with ringleader and former Rory paramour Logan Huntzberger (Matt Czuchry), to take her on a masked, drunken journey for … some reason. Something about grand gestures? Who knows; it’s an illogical diversion, and perhaps the worst Gilmore bit across either series, and yes, we are counting Season Seven. 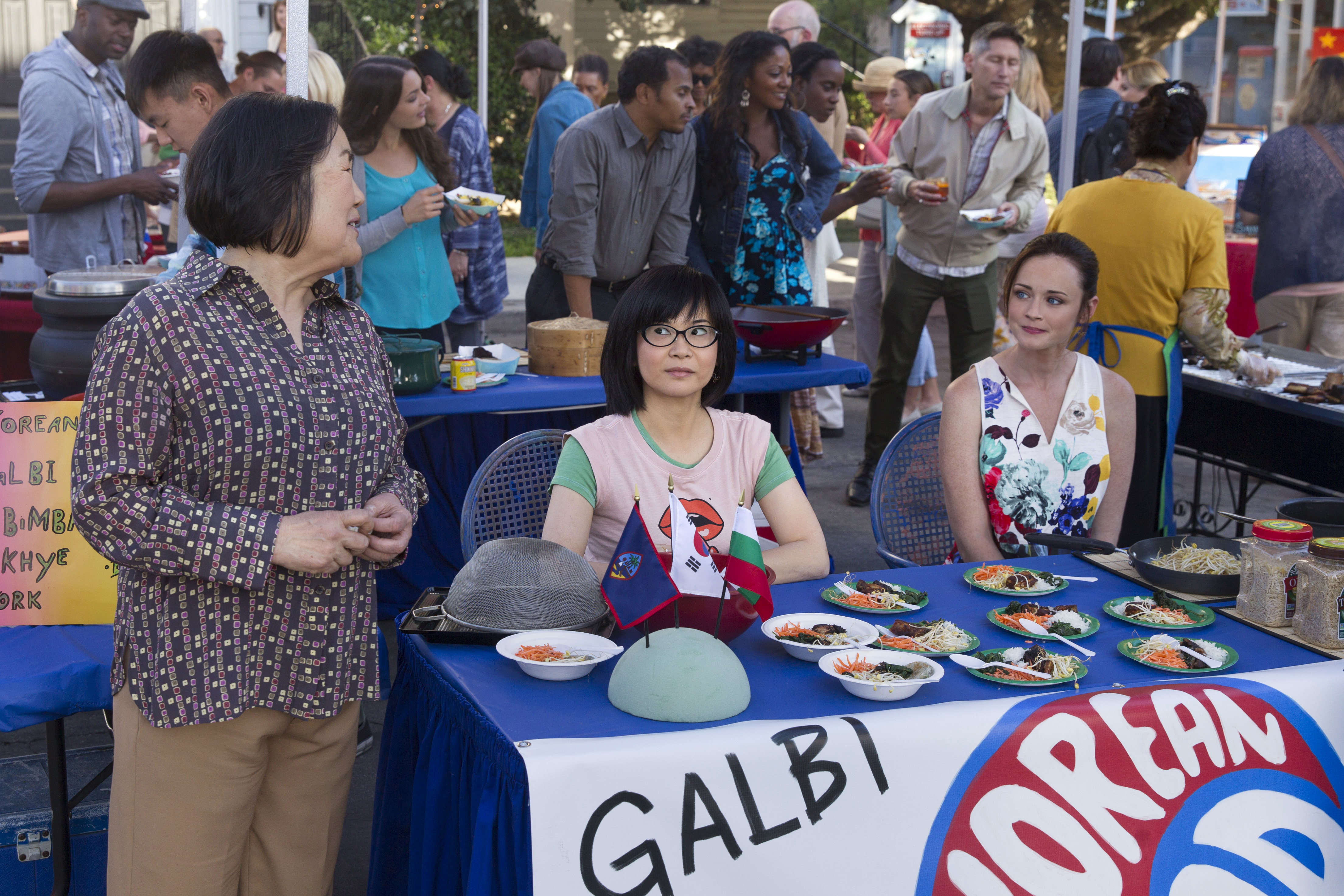 That bit also speaks to a larger frustration: Rory has become a shining example of how privilege and constantly being told how special you are can turn a precocious teen into an insufferable adult. She botches an interview with a gossipy blog because she thinks she’s too good for it; she’s ditched her apartment in favor of crashing on friends and family members’ couches, living a “rootless” existence; she’s sleeping with her ex-boyfriend Logan, who’s soon to be married to a different woman. Yes, plenty of thirtysomethings are going through similar bouts of immaturity and entitlement – those millions of thinkpieces about millennials didn’t come out of nowhere. (The series even acknowledges this with The Thirty-Something Club, a group of Stars Hollow kids who’re all grown up and living with their parents again – causing the older generation to form a support group that wants Lorelai as a member.) But all of this would’ve been seemed like necessary, messy growing pains if we were talking about 22-year-old Rory. With 32-year-old Rory, it just seems, frankly, a little sad.

Still, while Rory’s storyline was at times downright painful to watch (seriously, girl, take a how-to Mediabistro class on journalism), Lorelai and Emily’s journeys are far more satisfying. The former finally sees a therapist and embarks on a Wild-inspired trek to the California woods — it’s one of the revival’s funnier bits, as a bevy of other women are doing the same exact thing — before finally finding peace with her relationship and her career. Her mother, meanwhile, has the most shocking transformation: Without her husband of 50 years in her life, she fully embraces her independence, ditching her well-heeled, stuffy Connecticut digs for freedom and a seaside compound in Nantucket. “I can’t spend any more time on artifice and bullshit,” she exclaims at a DAR meeting. For longtime fans, it’s scenes like these that justify the existence of Netflix’s Gilmore resurrection in the first place.

Plus, given the way the show has always built out Stars Hollow as a densely staffed way station of quirk — a key part of the appeal of the Gilmoreverse — there is a lot of peripheral business that works like gangbusters. Every moment that Paris Geller (Liza Weil) is on screen is a gift, showing us how the over-achieving, hyper-competitive character has grown into adulthood. Melissa McCarthy’s all-too-brief appearance as clumsy but brilliant chef Sookie St. James is a reminder that she was always a gifted actor and comedian, long before her rise to superstardom. And Michel (Yanic Truesdale), the long-suffering concierge of the Dragonfly, is as snide and bitchy as ever – and, finally, out and proud. (The series’ lack of diversity is still, alas, a glaring issue, even as times have gotten increasingly progressive.)

And then there’s that ending. In the final episode, Lorelai and Emily toast “to the circle of life.” Rory’s pregnancy, unexpected and shocking as it may be, is part of that. Throughout the original series, much of the conflict was driven by Lorelai’s rejection of her privileged background, and Rory’s embracing of it (the coming-out party, the Yale education). Now, with this new Gilmore bun in the oven – the father, presumably, is Logan, who comes from the same privileged background as she – things have indeed come full circle.

Sherman-Palladino never really was a fan of wrapping things up with a neat little bow, even when the original Gilmore Girls was on the air. This isn’t even the first time a season has ended on a serious emotional cliffhanger, though it may be the first time that the stakes are so high. It remains to be seen if we’ll ever find out what happens with Rory, Lorelai, and the possible next generation of Gilmore girls. But the show lead, and we followed. For now, at least, fans have gotten the ending they always wanted.

Here’s everything you need to know about the ‘Gilmore Girls’ revival.