Cobie Smulders is not accustomed to being singled out. The How I Met Your Mother star and Marvel universe apparatchik tends to operate in the company of others, which is why she found herself somewhat stricken with panic earlier this year at the Sundance premiere of her latest film, Unexpected, which opens in theaters and on demand this Friday. “Oh shit,” she recalls thinking. “I’m in every scene.”

It’s true, she is — though it’s about time. Fans of her CBS sitcom, which concluded its nine-season run last year, might agree that her Robin Scherbatsky emerged as the most sneakily satisfying character — “sneakily” because when the series debuted back in 2005, Smulders was definitely the cast’s wild card. Alyson Hannigan and Jason Segel arrived in the wake of dearly departed television shows (Buffy the Vampire Slayer and Freaks and Geeks, respectively), Neil Patrick Harris effectively ditched Doogie Howser in the time it took him to deliver one of Barney Stinson’s many memorable catchphrases, and Josh Radnor was the series’ titular “I.”

Watch the Happier 'How I Met Your Mother' Alternate Ending

Smulders, meanwhile, grew up in Vancouver and didn’t venture into acting until she was 19. She bumped around a couple of shows, including the archaeological adventure drama Veritas: The Quest, which you most likely never saw. So her Scotch-swilling, career-driven journalist with the Canadian pop-star past was a total surprise, and her comedic timing hit Rose Byrne levels of out-of-nowhere-ness.

That said, the end of a successful sitcom can often signal a final bow for its stars. In fact, Unexpected writer-director Kris Swanberg admits to never having seen the show. “I met with agencies and they sent me a list of people they thought would be good,” she said during a press junket in Park City, Utah, last January. “Cobie was very personal with me about her own feelings about being a working mom. That’s how we connected.” The film, based loosely on Swanberg’s experience, concerns a Chicago high school teacher (Smulders) and her favorite student (Gail Bean) as they each confront an unplanned pregnancy. It’s a sensitive, self-aware story that manages to avoid every unsavory Dangerous Minds cliché you can think of, depicting motherhood as an equalizer of sorts — at least when it crashes headlong into these women’s dreams.

“I loved the script,” says Smulders. “That one took some convincing. I started stalking Kris via email, jumping in to say, ‘Hey, I’m here! If you want to talk about the movie, I’m around!'” Her tenacity paid off. At the time, Smulders was wrapping Results, an offbeat project from Andrew Bujalski (Mutual Appreciation, Computer Chess) in which she costarred with Guy Pearce as a fanatical physical trainer with boundary issues. The quirky character study, which also debuted at Sundance, was heaped with praise upon its release a few months ago. So, while moonlighting from her Marvelverse gig, Smulders seems to be finding ample refuge in the respectable — and very cozy — indie scene. (Bujalski is frequently credited with jumpstarting the oft-unscripted “mumblecore” movement, to which Swanberg’s husband, Joe [Drinking Buddies, Happy Christmas], is a prolific contributor.)

“I like that you think I’m being swamped with offers,” Smulders says, laughing. “That is definitely not the case.” Keep in mind that, while she’s chatting over the phone, the actress is driving through a Savannah swamp on her way to the set of The Intervention, the tentatively titled directorial debut of actress-writer Clea Duvall, which costars Natasha Lyonne, Arrested Development‘s Alia Shawkat and Togetherness‘ Melanie Lynskey — a squad that could give Taylor Swift’s a run for her money any day of the week. “I actually kind of prefer working with an ensemble,” Smulders says . “It’s just cool to be surrounded by such great people.” (Incidentally, HIMYM fans will appreciate that the film is, according to Smulders, about “friends who have decided that they’re going to hold an intervention for this married couple in the group because they think they should get a divorce.” Season four, episode four, anybody?)

If she hasn’t exactly commanded the spotlight, Smulders has been surfacing in rare roles that always seem to be in such short supply for women over 30 (she’s 33). Even Maria Hill, her no-nonsense agent of S.H.I.E.L.D character most recently seen in Avengers: Age of Ultron, feels like a natural follow-up to her unflappable HIMYM persona. “I do get the tough broads a lot,” she says. “It’s exciting to see more of them popping up. But I’m more interested in, ‘What is it that breaks you and how do you put yourself back together?’ than ‘I’m a strong woman, I can do anything.'”

Her words have personal resonance: Last April, Smulders told Women’s Health that she had been diagnosed with ovarian cancer when she was 25. This would have been during the third season of How I Met Your Mother, and at the time, Smulders shared the news only with her closest family members. “I’m a very private person,” she says. “And I decided to keep it private, because I didn’t know if I was going to be okay.” After several surgeries, she eventually was, and has since had two children with her husband, Saturday Night Live‘s Taran Killam. 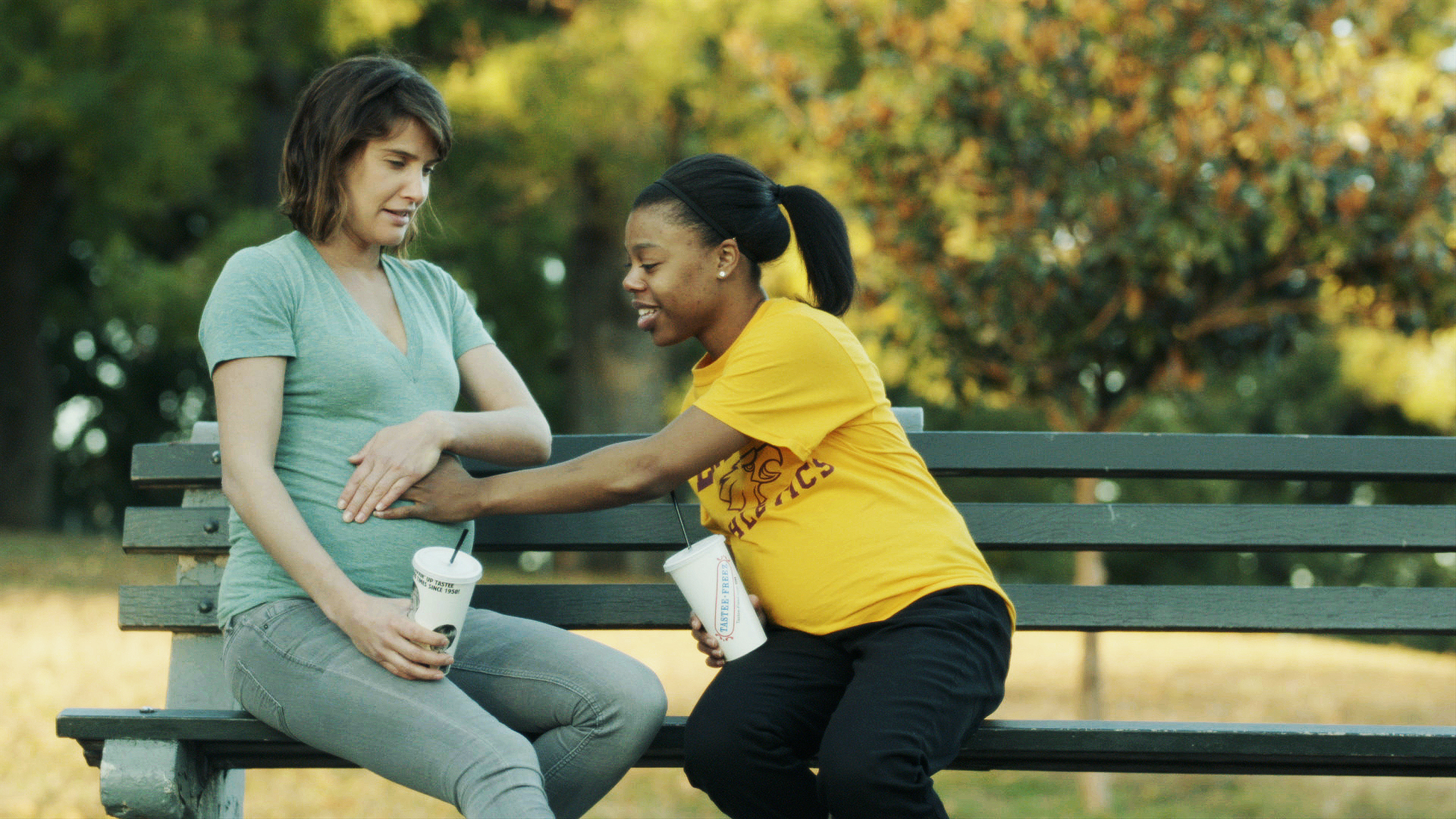 But Unexpected marks the first time Smulders was able to bring more vulnerability to the screen, not counting the episodes of HIMYM that dealt with Robin’s infertility. “I don’t think we’ve ever seen a film about pregnancy from a female perspective that shows what a huge change it is, and not for laughs,” she says. “You go into this movie, and you see there’s this older woman, she’s in a stable relationship, she’s got a job. This is the one who should be more secure and accepting of a new addition to her life. But she’s kind of panicking and the teenager is the one who is seemingly more prepared for this.”

Presumably, the experience of filming this 80-minute movie was worlds apart from the superhero set? “Actually, no, Unexpected cost two-hundred million dollars,” she quips. “There was a lot of food service. We had a really hungry crew.”

Joking aside, the only unlucky break Smulders has had to contend with lately is her leg, which she injured last month in a mysterious fall. “I won’t get into the story with you because it’s super boring, but I thought it was okay. Then I went to the doctor, and it turns out it was broken,” she says. As a result, she was forced to pull out of HBO’s Anita Hill movie, Confirmation, starring Kerry Washington. “It’s a shame, yeah,” she says. “But I’m still an able-bodied human being and I’m still working.”

And she’s still hearing from fans who, more than a year on, are struggling with their feelings about How I Met Your Mother‘s controversial ending. “People have opinions about it,” she says. “But it’s nice to be on something that people have opinions about. I get the most feedback on Robin Sparkles. I’m a fictional teen idol. How do I capitalize on that?”