There’s a moment near the halfway mark of the child-soldier drama Beasts of No Nation where our young hero, an African preteen-turned-rebel-army-killing-machine named Agu, is being prepped for battle. An older boy pulls out a knife and cuts the youngster’s forehead; he then rubs a powdery substance into the gash. As the group’s leader, a charismatic destroyer of souls known simply as Commandant (played by The Wire‘s Idris Elba), leads them toward their destination, the visuals begin to change: plants take on a rusty blood-red hue, the earth they walk on looks sickly and tainted, the sky is a corpse-like metallic gray. Agu’s eyes seem confused at first, then seem to go completely dead as the film speeds up and stutter, and the carnage begins. He has crossed over to some unspeakable place that will allow him to do unspeakable things. And though we’ve already seen people commit acts that no same, empathetic human being would rightfully do, this is the threshold point where we go from witnessing his nightmare to stepping right inside of it.

Mention this scene to Cary Fukunaga, the writer, director and cinematographer behind this harrowing sequence, and he’ll nod solemnly, staring down at a restaurant table he’s sitting at, right outside of the Toronto International Film Festival’s headquarters. “When I was making Sin Nombre [his 2009 debut], I wouldn’t allow myself to do a sequence like that at all,” he says. “Tinting the color, changing the shutter speed, all that trickery…it felt like I’d be relying on using those things to create an emotional effect. I hadn’t earned it, I guess. But having done two projects that relied on classical filmmaking — ones that forced me to learn the tools of the trade, the way a 19th-century painter would hone a skill set —  I knew this needed something different.” He looks up and narrows his eyes. “I mean, this is not a typical movie by any stretch of the imagination.”

That’s an understatement. From its long, hard conception to its take-no-prisoners storytelling — even down to its mode(s) of distribution, as Netflix will be releasing it in select theaters and on its streaming site on October 16th — Beasts of No Nation is anything but run-of-the-mill. Following one child’s journey through a living hell, Fukunaga’s labor-of-love adaptation of Uzodinma Iweala’s 2005 novel guides viewers from the peaceful, everyday life of a 12-year-old from an unidentified African country to his systematic desensitization and transformation into a killer of men. And though you could categorize this movie as one of numerous dramas that tackle contemporary global crises and take place on the continent, it’s as far from the usual Hollywood treatment of such issues as you could imagine. Other than Elba, there are no recognizable names in the cast. It’s visceral, you-are-there way of forcing viewers to experience Agu’s terror and moral free-fall offers no sentimentality or respite. And there’s no character a la Kevin Kline from Cry Freedom to hijack the story from a white-man’s perspective; the one moment you do see a white face appear, it’s passing in a van, shooting snapshots and driving in the opposite direction.

“My parents are from West Africa,” Elba says a few weeks later, pacing around a New York hotel room. “And the fact of the matter is, most of the screen images you see of Africa and the characters in those films feel like they’ve been filtered through a very two-dimensional perspective. The movies essentially aren’t about Africa; they’re [in Californian accent] ‘Hey, this is our African friend.’ I’ll put it this way: When you watch a film like this, on a subject like this, half of you is going, ‘Child soldiers, might be a little bit Hollywood…You know, in order to get a film like this made, they probably had to Hollywood it up a bit and get really sentimental.’ And Cary doesn’t do that. If you’d seen his other movies, you knew that’s not how he was going to go into this.”

For Fukunaga, the project goes back to his early days, when a friend from the Peace Corps had given him the book after they’d traveled to Sierra Leone to research a potential project. The director happened to bring the novel with him to a pitch meeting at Focus Features; when executives mentioned they were interested in developing that very story, Fukunaga jumped at the chance. The project eventually stalled, and he threw himself into two incredibly different works: a straightforward take on the literary classic Jane Eyre (2011) and the first season of HBO’s crime-anthology series True Detective, which would end up winning him an Emmy and making him a household name.

“I was actually ensconced in a house upstate, cut off from everybody, when that whole thing was going on,” Fukunaga says in regards to the attention that the time-is-a-flat-circle pop phenomenon was generating. “I was already working on the screenplay for this, in a place with no Wi-Fi or the ability to Google my name — which was for the better. I’d reached out to one of my producers to let her know how things were going, and she told me, ‘It’s a good thing you’re cut off from the hype right now…things are getting a little crazy.'” As he was already prepping to shoot Beasts that upcoming spring and summer, he claims that True Detective‘s popularity had little effect on the project. “I was worried that people would eventually see the movie and think, ‘Well, he clearly needs Nic Pizzolatto to write his screenplays,’ but that was about the extent of the two projects’ connection.” (For the record, Fukunaga is not being the least bit sarcastic.) 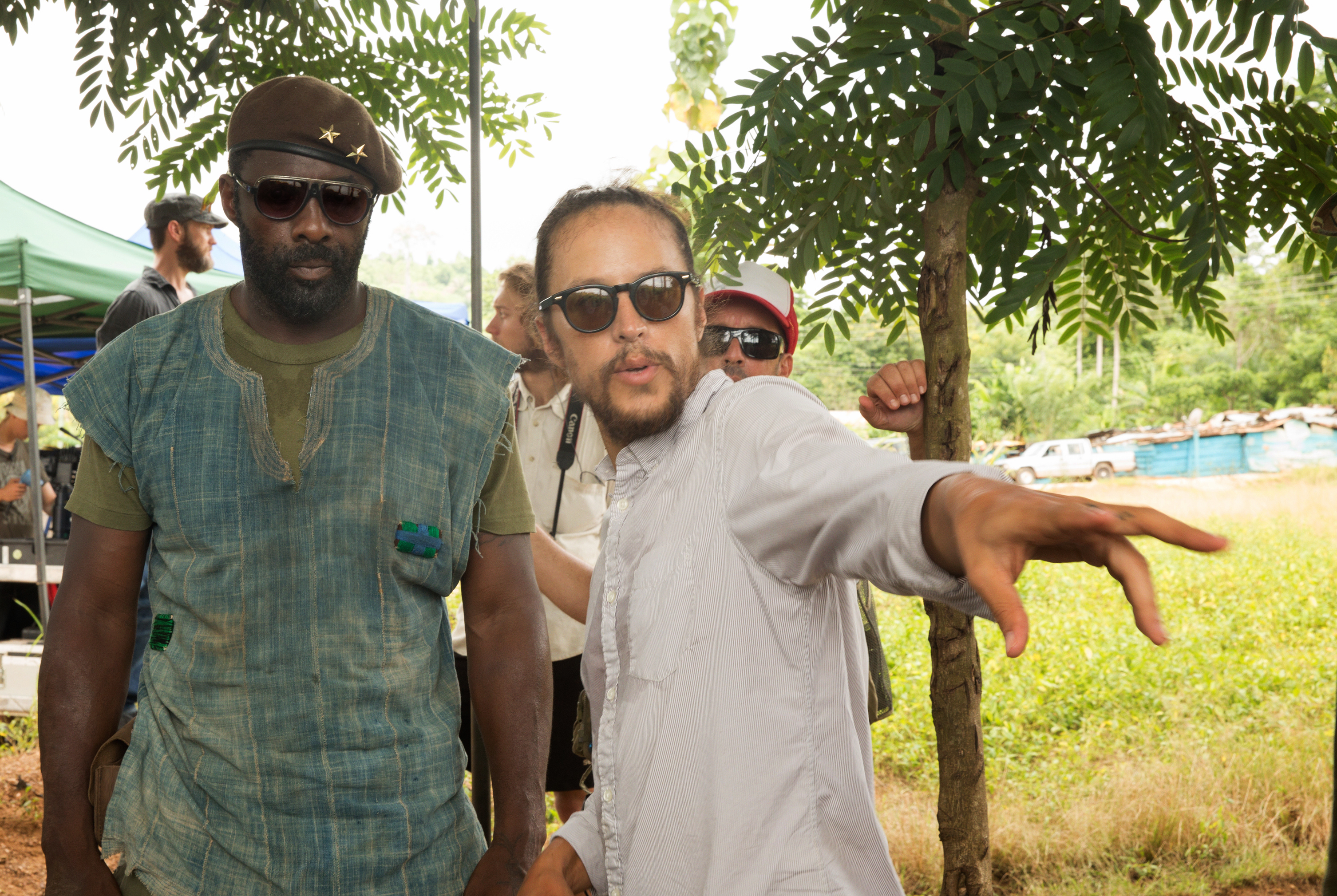 Having secured Elba to play the movie’s father figure/villain and finding the perfect Agu in Abraham Attah, a nonprofessional actor who the casting agent discovered playing soccer on a schoolyard, Fukunaga and his team set up shop in Ghana — at which point Murphy’s Law went into effect. According to the filmmaker, they’d been promised aid by the country’s military and still found themselves making prop rifles out of wood, as no actual guns had shown up. (“When we did get weapons, we still had no ammo for the first half of the shoot.”) Much of the film equipment was stuck at customs. The original cinematographer pulled his hamstring early on the first day of shooting, which was why Fukunaga ended up doing double-duty as director of photography himself. When the U.S. beat Ghana during the 2014 World Cup finals, none of the local drivers or hotel staff showed up the next day. As reported by Variety, Elba almost tumbled off a cliff. And a large number of the crew got massively sick — including the filmmaker.

“To be fair, I got malaria before we started officially shooting,” he says, chuckling. “And it was the best thing that could have happened. Not the malaria part, obviously — that sucked. Aspiring filmmakers, I would not recommend it. But it allowed me to work a bit longer on the screenplay and figure out how to cut down some rising costs by paring down the third act. It ended up being remarkably beneficial. But there were so many things that happened during the making of this, I can’t even recall all of them. I knew it would be complicated, but I had no idea it would be such a hard shoot.”

“One of my producers told me, ‘It’s a good thing you’re cut off from the [True Detective] hype right now…things are a little crazy.’ I was worried that people would see the movie and think, ‘Well, he clearly needs Nic Pizzolatto to write his screenplays.’

“It was rougher for Cary than anybody else,” Elba says, when the subject is brought up. “Keep in mind I showed up after everyone had been there for a while, so they’d seen the worst of it. But it wasn’t like people were saying, ‘There’s no 3G Internet…how can I play my apps?!?’ We knew what we were getting into.” The star says that the first day he showed up, a diminutive boy who went by the name “King Kong” (he plays the film’s hardest-of-the-hard soldier, Striker) stepped right in front of him, refusing to let him pass. “He was sizing me up in front of the other kids,” Elba says, mimicking a child petulantly looking up at an adult, hands on hips. “‘Oh, are you the leader? All right, let me see you lead then.’ Had I shown weakness or seemed tentative, I would have been eaten alive. And I literally was like, ‘What are you looking at? Go on!’ and just sort of waved him on. Everyone went, ‘Ohhhh, the Commandant is here! The leader is here now!'”

It was during some reshoots of the film in the jungles of Brazil — Fukunaga had gone down to participate in a panel, and decided to use his time in South America to “fix a few shots involving a helicopter that I wasn’t happy with” — that he got a call saying that Netflix wanted to buy the film. “I’m gonna be brutally honest,” the director says. “My heart sunk a little bit because I thought, ‘Does no one want to buy this film, and put it in theaters?” And then [Netflix Head of Content Acquisition] Ted Sarandos got on the line and he’s like, “No, no…we want to put this movie in theaters [as well], we want to move into new territory.’ [The company is partnering with Bleeker Street Media for its theatrical run.] So people will have the chance to see it on a big screen, and the company doesn’t have to worry about box-office returns because they have a platform that could potentially get this out to something like 65 million viewers. I’m not saying that many people will watch it, but for a movie like this to have that opportunity…”

Elba, who’d signed on as a producer for the film as well, echoes his director’s thoughts: “There was a part of me that was always like, ‘Who’s going to see this film?’ Now the answer is, potentially millions of people, all of whom are getting a little education about what’s going on in the world. So, you know, the Netflix model…thank fuck for that!”

As for whether Beasts signals a return to the sort of immersive, highly embedded style of guerilla filmmaking that helped single Fukunaga out when Sin Nombre first made a splash at Sundance, he’s unsure whether this represents a circling back or a step forward. “I mean, I honestly thought those types of films, stuff like Nombre and Beasts, would be the only type of movies I’d be making,” he says, as he gets ready to do a Q&A for the Toronto festival’s afternoon screening of the drama. “Then I realized if I wanted to have a career, I needed to make sure I could do lots of stuff. Not even commercial stuff — honestly, I knew True Detective had a great cast, but I had no idea it’d be so fucking popular! But my heart does kind of lie with these sorts of stories. Ultimately, I don’t want to make things that are just distractions. They don’t have to be hard to make. I just want them to be good.”