After eight seasons, a bevy of pitch-perfect hipster-skewering sketches and several unforgettable catchphrases – we’ll never look at birds or hear the word “cacao” the same way – Portlandia is hanging up its (locally made, ethically sourced) hat.

But what started as a way for Carrie Brownstein and Fred Armisen to lovingly poke fun at the most ridiculous aspects of boho (and bobo) culture evolved over time into a finely honed series of character sketches. “By the time we got to Season Four or Five, we realized that we wanted to focus on character over concept,” Brownstein says over the phone from Los Angeles. “Character was what drew us to television in the first place, in terms of what we were watching and what we were compelled to keep watching.”

That also allowed them to keep the show from seeming too tied to a particular moment – there’s no episode, for example, where Portlandia‘s citizens tackle the current chaos in the White House. “We can’t really divorce it from the time in which we’re writing, but it was always a show that was exploring the ways people perform certain categories,” Brownstein notes. “How do people perform whiteness? … How do you perform couplehood? How do you perform heterosexuality?”

And so, the show’s co-creator explains, they chose to focus on a select few of the lovable weirdos who came to define the show’s off-kilter sensibility. There was Toni and Candace, the passive-aggressive feminist bookstore owners; Nina and Lance, whose relationship explored everything from safe words to what happens when your partner befriends faux-intellectuals; and Kath and Dave, who were super duper psyched about literally everything that happened to them.

But as Brownstein preps to put away the wigs and leave Portlandia behind, which of the city’s quirky denizens will she miss the most? Who were the characters she loved – and the one she won’t particularly miss playing. 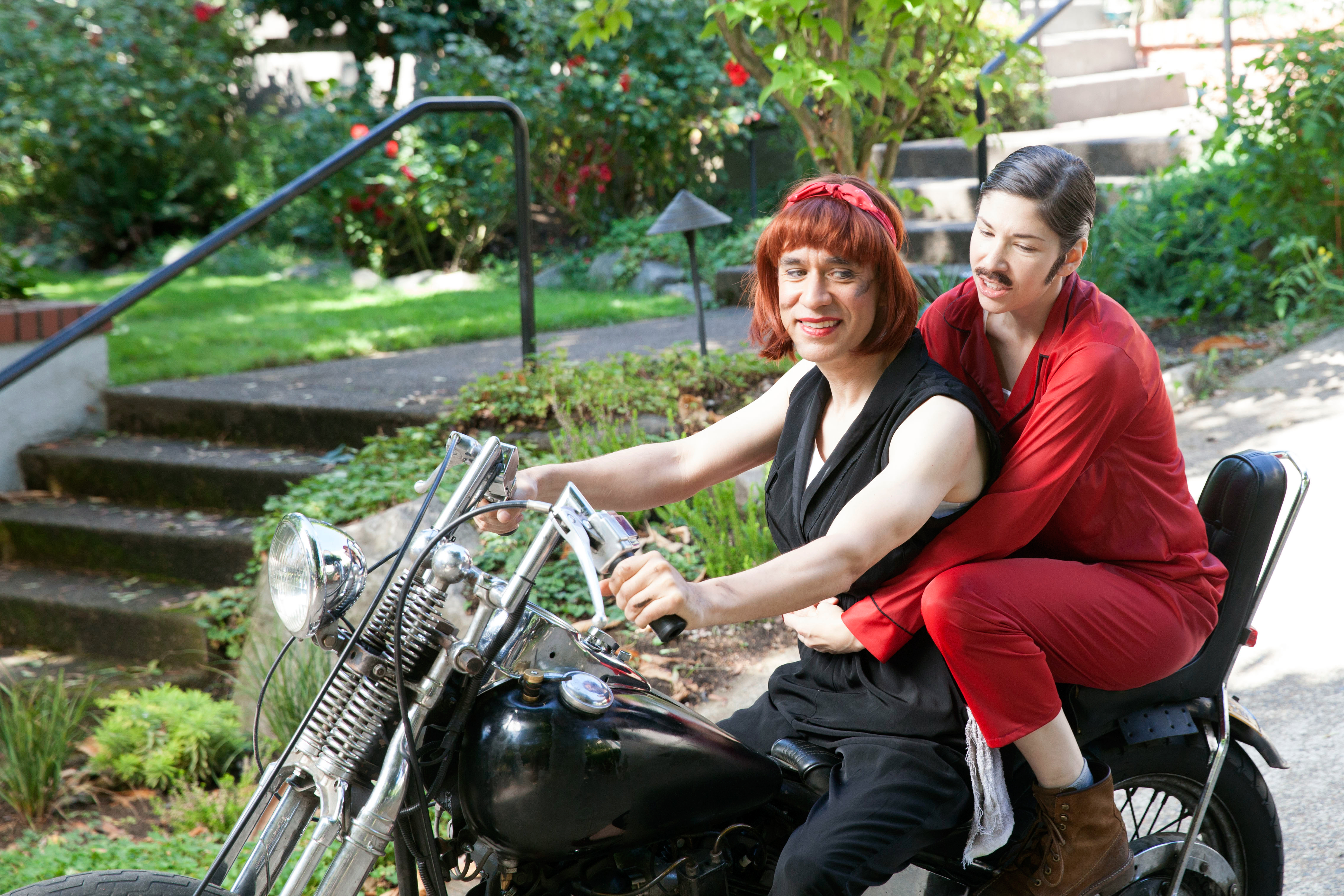 Nina and Lance
In Season Eight, Nina and Lance’s origin story is finally revealed – and it involves a meet-cute in a burlesque club, Jeff Goldblum playing a magician and a face-swapping procedure a la Face Off. “With Lance and Nina, everything we do with them has an element of outlandishness,” Brownstein explains. “Within that silliness, though, we’ve tried to elevate the earnestness and the heartfelt quality because there is a very sweet, loyal, affection between the two of them.… We wanted to find the way within such a bizarre world to have it really be about two people who found each other and were willing to do almost anything, [who’d] go to great lengths to stay in each others’ lives. For those two characters, it’s that combination of taking a very classic sort of romantic trope of, ‘I will go to the end of the earth for you.’ That, and ‘What could that entail that is really silly?'”

Brownstein also says that Lance was one of her favorite characters to play throughout the series’ eight-season run. “There’s just things we do as women to behave as women, like crossing your legs … you just feel like you need to take up less space in the room,” she says. “When I played Lance, I realized that I felt an inherent right to take up space in a room. That freedom, that practicing of confidence and of unapologetic personhood … I will miss that, even though his version of masculinity isn’t what I would say is evolved. But it was interesting to explore.” 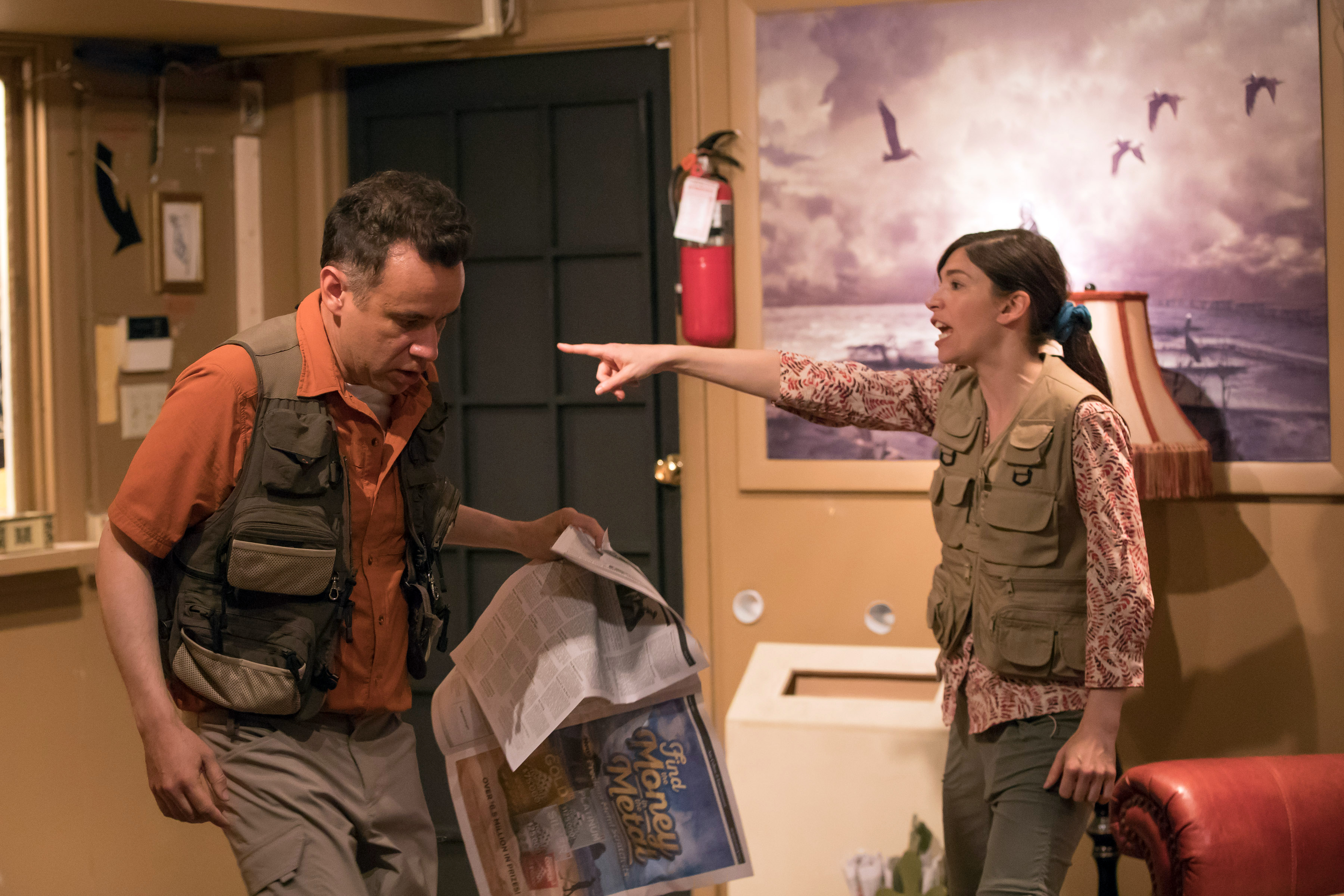 Kath and Dave
For much of the show’s run, Kath – of the uberintense couple Kath and Dave – was Brownstein’s favorite character to play, “until this season where I just felt so tired of her because she’s so outlandish. Kath and Dave just start out at 10 in any situation. They just wake up so amped. I see people … often you see them on planes or in airports or in cars, [or] in line somewhere, and it’s just this outside disproportion of anger over any given situation.”

So what changed her mind? “This year we did this sketch called Escape Room … and both Fred and I were hoarse by the end of that sketch,” she says. “We were just running around screaming our faces off. The physicality required for those characters.… I realized this year, I so can’t wait to take this fake ponytail off and never be Kath again.” 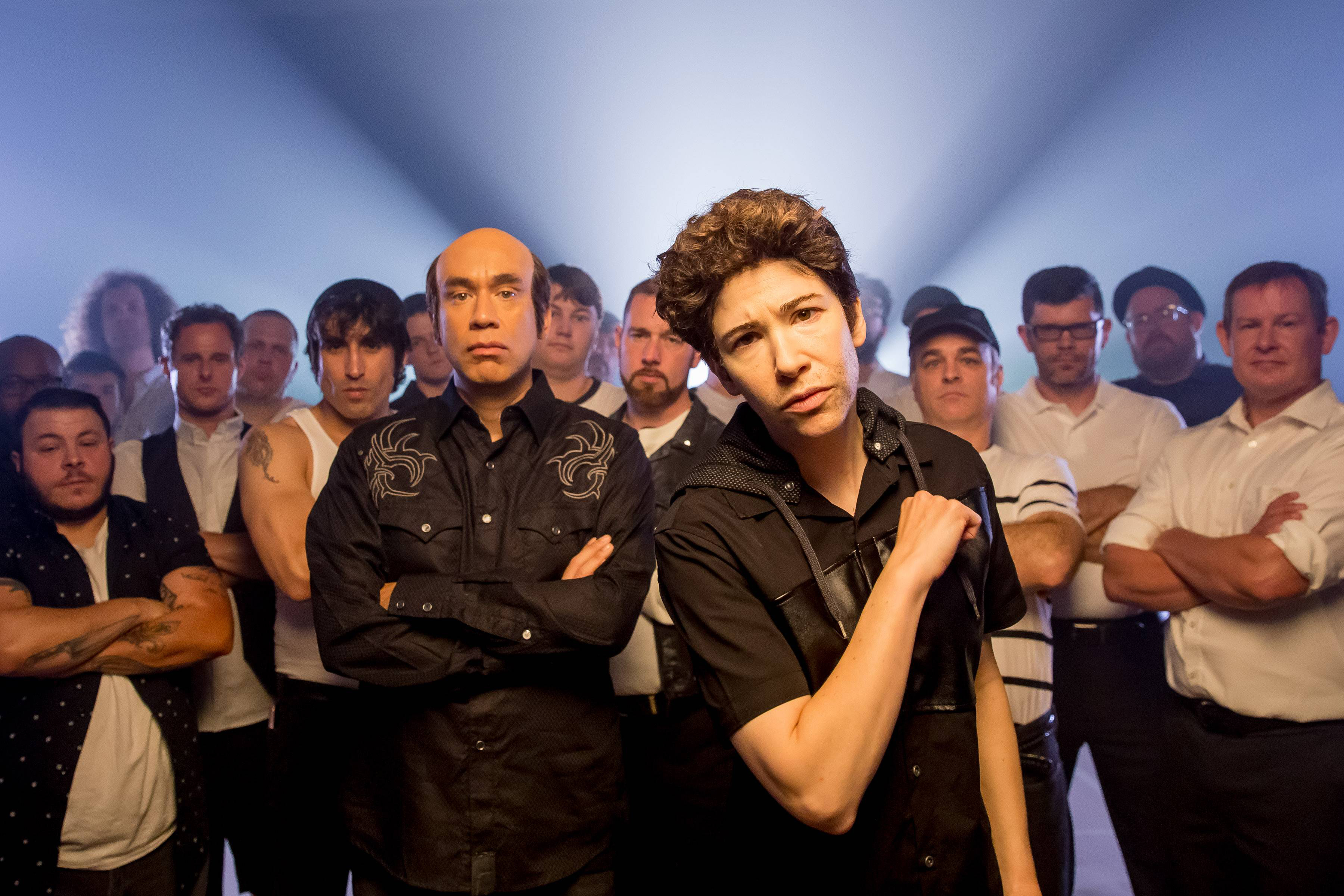 Drew and Andy
Though Portlandia has always worn its liberal heart on its sleeve, it has never been overtly tied to a particular political moment. But they have explored what’s happening in the world at large in other ways – such as Drew and Andy, the men’s rights activists who first appeared in Season Seven with cringeworthy-but-you’d-totally-see-them-on-Reddit soundbites like “men need safe spaces too” and “suddenly, it feels like we’re a minority all of a sudden.”

“We already had two characters that had embodied a mode of outrage, that used anger as vernacular and that was Toni and Candace,” Brownstein explains. “[But] the world sort of caught up with a certain kind of irascibility that they possessed. We wanted to explore a new duo who felt a sense of disinheritance, and we saw all these white cis males embodying this sort of sense of being oppressed for the first time – I would say very misguided senses. But they were kind of adopting this language of marginalization. White, straight men suddenly felt like this legacy that had been such a given … they were being robbed of it.” Still, she says “the idea is not sort of make them targets and make fun of them, [but] trying to find sort of threads of compassion for who these people were.” 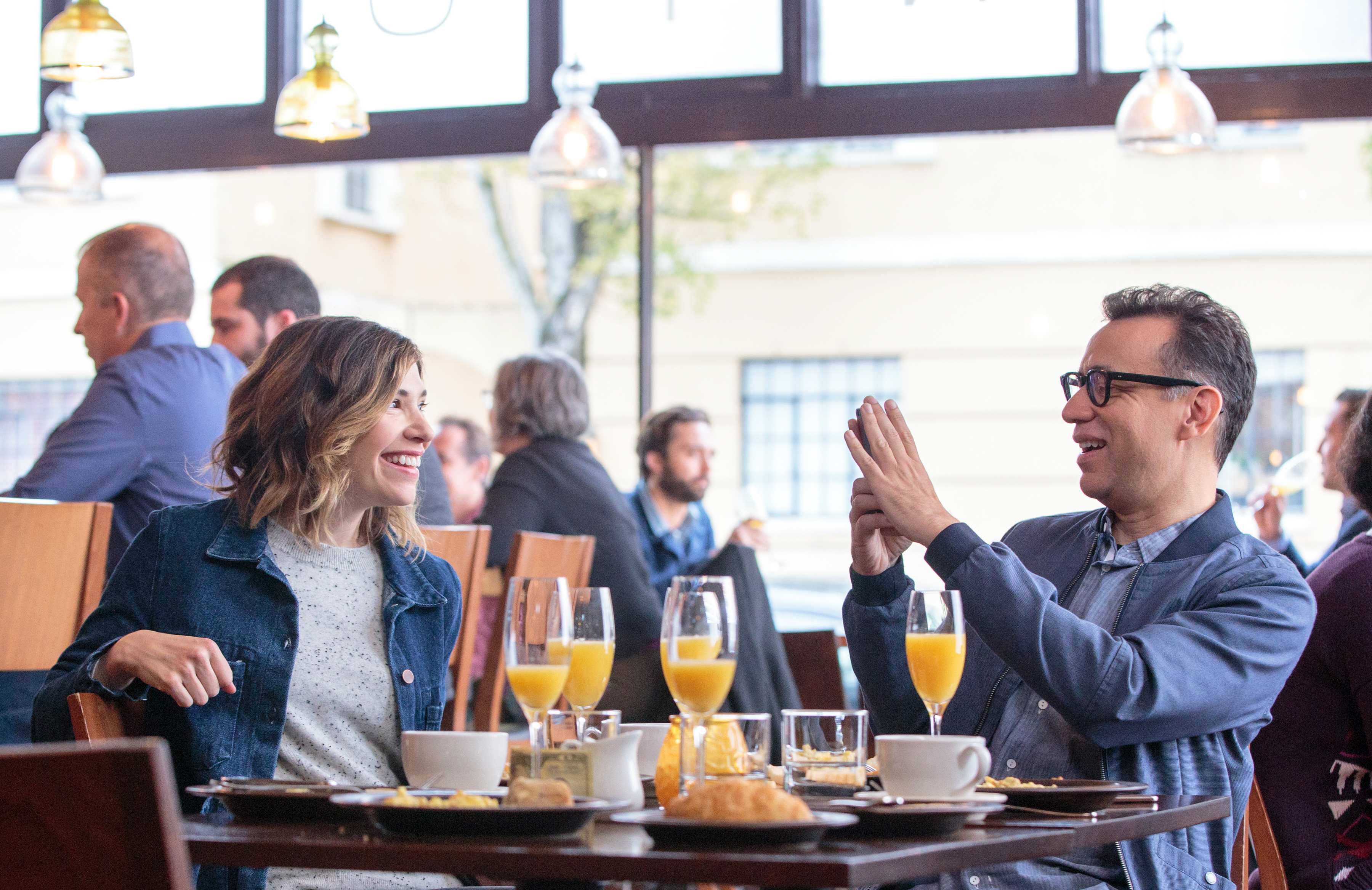 Fred and Carrie
Brownstein and Armisen also spent much of the series playing exaggerated version of themselves, though she says there”“wasn’t a crossover at all” between the pair and their fictional selves. “They’re so different so it’s pretty easy to just think of them as characters. They’re much more gullible than Fred and I are in real life. There’s a kind of naiveté that we wanted them to possess in order for them to move through the world of Portlandia – a curiosity and optimism. For the most part, I think they were just another version of us that existed.”

Still, some of the scenarios Carrie and Fred ended up in were based on IRL experiences. “One thing that I think was based on something we had experienced, that I think everyone experiences, is that long goodbye episode,” she says. “The one where Fred is just taking me to these parties and he has to say goodbye to everyone before we leave. That was part of a whole Fourth of July episode, when the mayor buys weapons from dark web.” (Mr. Mayor, we may miss you most of all.) 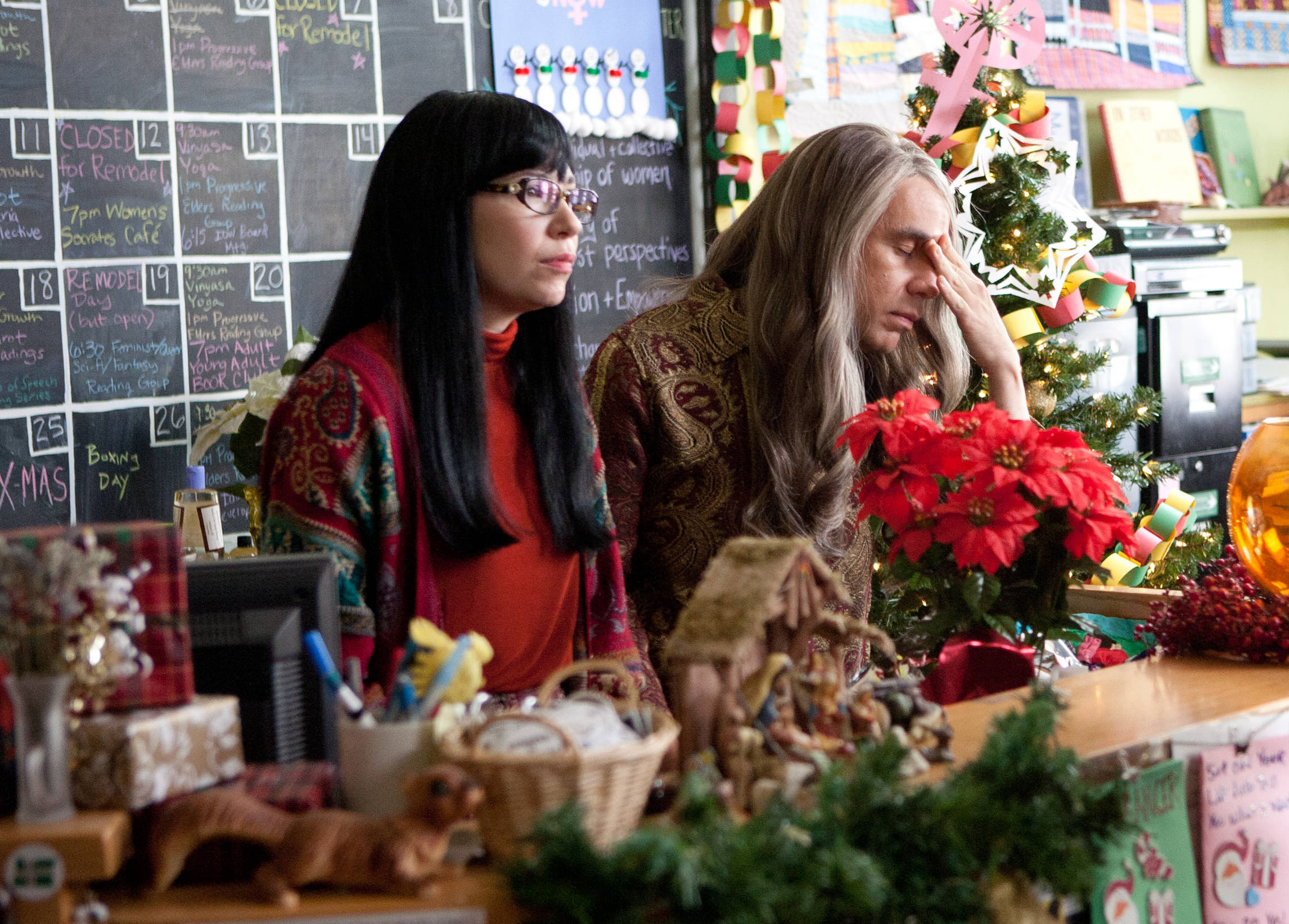 Toni and Candace
Two of Portlandia’s best-known characters, erstwhile feminist bookstore owners Toni and Candace, have had quite the evolution over the sketch show’s run; their origin story was told in stand-alone episode in Season Five, inspired by Working Girl and set in the cutthroat world of … bookstores in the 1990s? “I wrote that episode, and it was definitely one of my most favorite ones to write in the entire series,” Brownstein enthuses. “We wanted to explore who they were and get a deeper sense of their motivations and their history. Our first idea was that they would’ve come up through the second wave [of feminism] or even get in, like, punk bands in the 1990s – we explored that for a while. And then we decided that the more surprising, unexpected version would be that they had started out like that, that they had started out in a corporate world. They loved books – they would’ve been like these corporate women who were pitted against each other under the bigger umbrella of how they’re affected in the patriarchy.”

By the end of the series, Toni and Candace have retired and learning to navigate their relationship outside the boundaries of the bookstore. (In real life, the Portland shop on which WWF was modeled on severed ties with the show, which its owners say has had “a net negative effect on our neighborhood and the city of Portland as a whole.”)

“Their brand of feminism is so misguided,” Brownstein says. “It’s barely second wave. They’re feminists sort of in a way that you’re like, How did they land on this philosophy? It seems so just sort of wrong in terms of their interpretation of it. So we thought well, this kind of makes sense.

“Even though Toni and Candace’s version of feminism was, to me, unsophisticated and flawed,” she adds. “I liked that we had characters on a show that were unabashedly feminist. To me, that is a huge achievement.”