Carl Brutananadilewski is an authority on many things – pornography, driving while intoxicated, groping women at Foreigner concerts – though it’s his extensive knowledge of pro football that has brought him fame and fortune. Or at least fame.

For nearly a decade, he’s used that expertise (limited almost exclusively to the New York Giants) to become one of the most prominent pigskin prognosticators in all of Southern New Jersey, and his Stone Cold Lock of the Century of the Week has become required viewing for fans looking for that last-minute gambling edge. And the occasional conspiracy theory/drug-fueled flashback/xenophobic rant. Just like Colin Cowherd!

So, with NFL training camps officially open this week – and the final episodes of his cult-favorite show, Aqua Teen Hunger Force, airing Sundays at midnight on Adult Swim – Rolling Stone caught up with Carl to get his hot takes on the upcoming season, the league’s myriad of offseason controversies and why 2015 will be a big year for the Big Blue Wrecking Crew.

With NFL training camps opening this week, I guess the obvious question is, ‘Are you ready for some football?’
I’m definitely in training; I’m doing lots of carbo-loading. You burn a lot of carbs watching the NFL Network. Right now I’m watching a show where Rich Eisen takes you on a tour of players’ bathrooms. It’s like Cribs, but it’s called Cans, where they just show all these cool toilets. Ndamukong Suh bought one of Saddam Hussein’s golden toilets and put it in his mansion down in Miami. It’s a cool show, you should check it out.

It’s been an eventful offseason for the G-Men– what was your reaction to Jason Pierre-Paul losing a finger in a fireworks accident?
Let me tell you, the only finger JPP needs is the middle one, to just hang in front of Chip Kelly this year. JPP’s like an eagle; they ain’t got ten fingers, but they got strong talons, you know? In solidarity of JPP, I cut the finger off my foam finger, so I’m just going to be waiving a fist this year, just so JPP knows I’m with him in spirit.

What about Eli Manning? There’s a lot of pressure on him to lead the team back to the playoffs…
Eli’s a legend, he’s one of the top five quarterbacks to have ever touched the pigskin. Mark my words, he’ll have a couple more Super Bowl rings before it’s all said and done. He’s not as good at doing pizza commercials as his brother is, but that’s about the only thing he doesn’t beat his brother at. And, sure, he looks like he’s getting ready for his third-grade yearbook photo, strutting around the Big Apple in his Toughskins and his cowboy shirt, but Eli’s an all-timer. He’ll be fine.

Most experts don’t see the Giants winning the NFC East. Safe to say you disagree with their predictions?
Who else they picking? Philadelphia? Oh yeah, the Eagles. Let me tell you, right now, Timmy Tebow’s got them holding group prayers for third place in the NFC East. Like, God’s really gonna shine down on Sam Bradford! I’ve got news for you: God hates Sam Bradford. Otherwise He wouldn’t make his knees bend like that. I can say that ’cause I’m a Catholic.

And the Cowboys are a circus. They got Tony Romo, who, it sucks when he starts playing well, because I can’t use some of the nicknames I’ve developed for him over the years. When he’s playing good, he makes me look like an asshole. Tony’s a proven winner; just like Peyton Manning. He’ll keep you in the game, he will keep you in the playoff hunt, he will get you to the first round, and that’s when he slips on the ol’ banana peel.

OK, so before we get to the rest of your predictions, I’d like to get your take on a few of the NFL’s hot-button issues. First, Roger Goodell – do you think he needs to step down as commissioner?
Listen, I speak truth to power. People don’t want to hear me talk; my opinions are dangerous to the league. Roger Goodell? He’s got no moral compass. You gotta know what’s right – I think child abuse or hitting your wife are bad things, but maybe you give the guy a game suspension for that. The league’s gotta remain competitive, you gotta keep that parity. The guys are sorry, they said so! And hindsight is 20/20; I know that Ray Rice, had he known there were cameras in that elevator, he woulda never done that to his fiancée.

Same with Adrian Peterson. You know, kids today, they’re outta control. You don’t have to be that way with your kid, you could be like my dad; he approached it the right way – he left when I was 7 and didn’t tell me or my mom where he was going, and that was his way of not abusing me. And for that reason, I respect him. 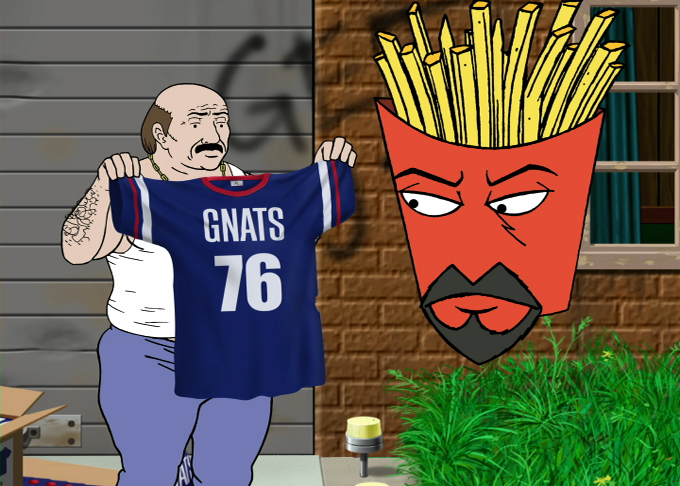 What about Tom Brady’s suspension? He says he’ll fight his four-game ban; do you think the league overreacted in regards to ‘Deflategate?’
I’ve got some controversial views about Brady. I believe he was created in a lab; Tom Brady didn’t exist before 1995, and you know why? Because he was created in a lab, right down to the chin divot. But I’m gonna give Brady some credit, I don’t think he knew about the deflated balls. You know those key fobs they have on cars I can’t afford, where you can start it from a distance? I think Belichick was using one of them to inflate and deflate the balls remotely as the game progressed. I think they got it calibrated where it’s perfect for Brady’s hand, then overinflated it for Andrew Luck. Look into it. That’s a take nobody has the guts to go to the mat with. I’m in danger just saying it. Outspoken people like me disappear all the time – look at Fireman Ed. He’s gone. He heard the whispers. I’m endangering my life talking to Rolling Stone right now.

You just mentioned Andrew Luck…what’s the deal with that guy’s beard? It’s pretty gross.
It’s like he’s busy building barns with the Amish or something. I don’t know what his deal is. Someone needs to tell him Papa John ain’t interested if you got a neck beard. He’ll hire a zitty teen, sure, but if you want the big bucks, run a comb through your hair, get your teeth capped. You’re a professional, you look like a barn animal.

What about all the big-money contracts? Do you think it’s crazy that Ndamukong Suh got $114 million from the Dolphins?
All I’ll say is, if Ndamukong Suh is making the kind of money he’s making for stepping on people’s balls and spitting in their faces, I should be looking at seven figures right now. Someone should sign me because, yeah, I’ll step on someone’s face, I don’t care. I’ve done it before. I’ve done it for free. I’ve paid someone money to do it!

What about Russell Wilson? We could talk about his ongoing contract situation, but I figured you’d have more to say about his chastity vow with his girlfriend, Ciara…
That’s news to me! I’ve never heard of Ciara, because I don’t listen to any music recorded after 1987. Is she like Roberta Flack? She’s gotta be 13, right? That’s the only reason for this chastity thing. I’m a big fan of getting it all out; to me, semen is like venom – you gotta secrete all of it, so you’re light and you’re ready to unload on a Sunday. That’s why I close the strip clubs on a Saturday night. I try to take care of my business in the VIP room so I can focus on the game, and I’m not thinking of the cheerleaders or that woman at the bus stop that I had an issue with; I was complimenting her looks, and she got all cranky about it! Anyway, if you don’t take care of that with a handy in the parking lot, your mind’s gonna be elsewhere. It’s not gonna be on the game.

Ah, it don’t matter. I wouldn’t never bet on the Redskins anyways. They suck. See, that’s just a small part of the secret to gridiron success: Never bet on the Redskins. But there’s a bigger reason I’ve been able to amass an impressive record of winning slightly-more-than 50 percent of my professional football wagers. I’m a creature of habit. I follow weird, superstitious rituals, you know, like Wade Boggs. Or the Pope. Win or lose, I don’t never wash my underwear until after the season is over. Also, the Friday morning of my picks, I eat a microwavable Hot Italian Beef Sub from the Wawa down the street. When they took my keys after my fourth DUI, that’s the only food place close enough so I can walk to it.

Anyways, it ain’t all superstition. I also use science, like Billy Beane did with Moneyball and that Nigerian Warlord did to gyp me outta all that money. I have an advanced software program on my Tandy RS80 called Pigskin Prophet. It’s still a little buggy since the upgrade – it was written before the Carolina Panthers were a team. But I plug in my stats and my player notes and it spits out a winner. I have to account for computer error. It picks the Raiders to win way too much. I wish the whiz kids at Radio Shack would update the program to tell it that Kenny “The Snake” Stabler is retired now, and also dead.

Who are some of your fantasy football sleepers this season? We’re all looking for an advantage, and your expertise would be a big help…
I don’t play fantasy, buddy, I play reality. I don’t live in Game of Thrones world. Winter ain’t comin’ in my world, it’s real time, and I watch everything in real time. I got my mom to pick up the NFL Network for me, she don’t know about it, don’t tell her. I order some chow mein, settle in. I tend to keep a Maxwell House coffee can next to my recliner, so I can piss in it and not have to miss any of the white-knuckle, smash-mouth action. I get two cases of beer, I usually nod off about 9, but I usually come to around 10:30, catch the last half of the late game. If I could do that every day, that would be my fantasy.

OK, so let’s get to it. Who is Carl’s Stone Cold Lock to win Super Bowl 50?
You really gotta ask me this question? The G-Men, the Big Blue Wrecking Crew! It’ll be tight in the first quarter, but they’ll run away with it. I’ll say 70-3 over Denver. Maybe 77-5, where Denver gets a safety on some technicality, ’cause of some gambling thing. The Giants are taking the Broncos to the house. I’m only three beers in, but I feel good about it, so mark it down.