George R.R. Martin Goes Out to the Ballgame - Rolling Stone
×
×

The score was 10-1 in favor of the Staten Island Direwolves by the time he grabbed the mic and took the field, but George R.R. Martin was there to warn the boys of summer that winter could still be coming. “If they can only hold on for another couple innings,” the man behind the Game of Thrones phenomenon said, “I won’t have to kill another Stark.” The crowd roared. And when the live arctic wolf accompanying him took a dump near the third base line a few seconds later, they roared again.

From top to bottom, Saturday’s “Meet George R.R. Martin Night” at the Staten Island Yankees’ scenic Richmond County Bank Ballpark was a weird, wild event. With the Lower Manhattan skyline shining in the distance, a record crowd of 7,529 turned out to watch the minor league team, renamed the Direwolves for one night only, take on the Hudson Valley Renegades while wearing custom House Stark and House Lannister uniforms. Direwolf swag and autographs from the A Song of Ice and Fire author himself were available on a first-come, first-served basis. It was a star turn for the author, who’s been catapulted to celebrity status by the success of the HBO series based on his novels. 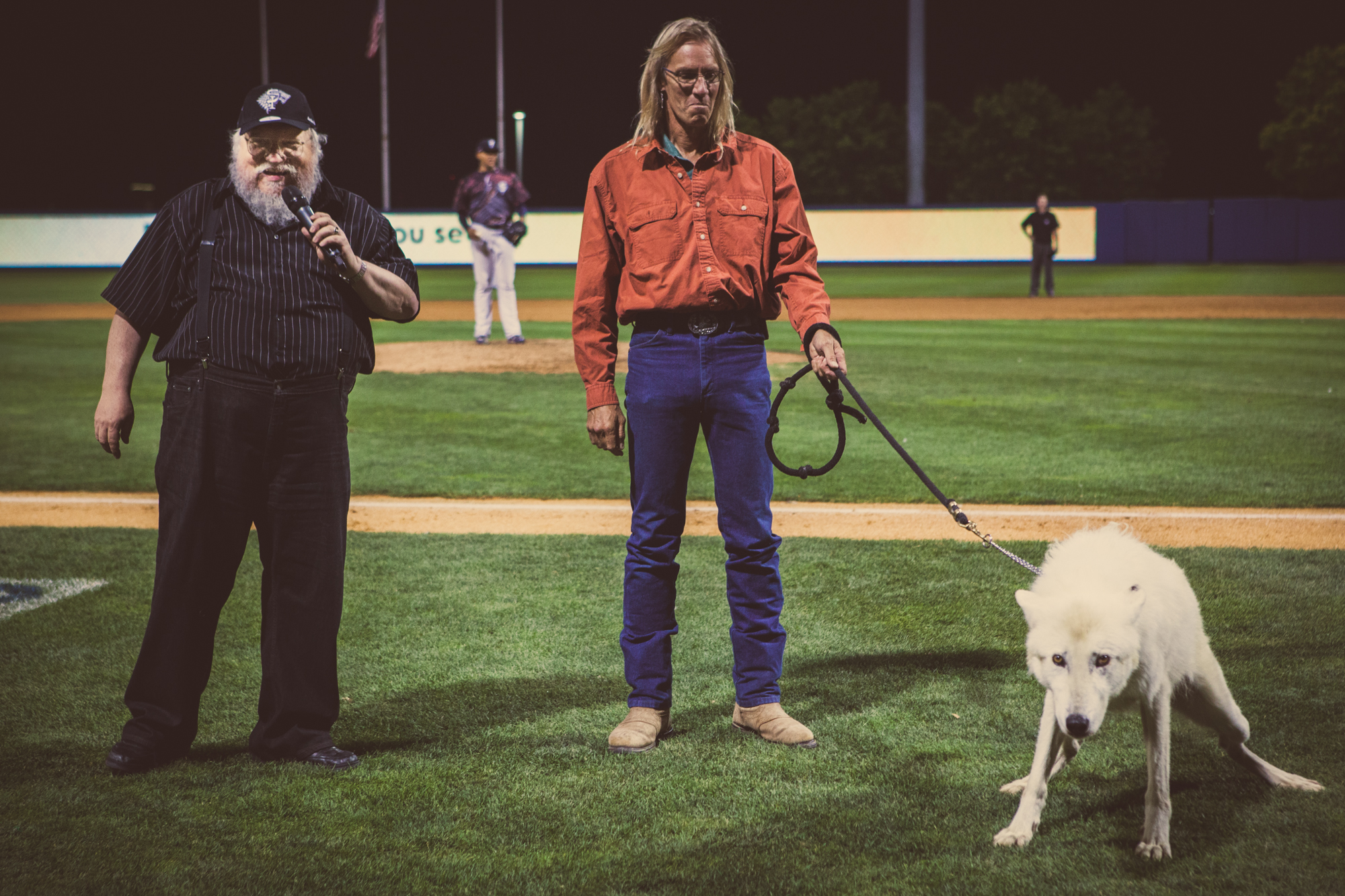 But for Martin himself, it was a time for wolves. His appearance was a fundraiser for New Mexico’s Wild Spirit Wolf Sanctuary, a non-profit rescue facility for the animals at the heart of his epic-fantasy saga – hence the beast who befouled the infield. The team cut the charity a surprise $10,000 check and launched a benefit auction of the custom jerseys. In the process, they enabled fever-dream sentences like “George R.R. Martin attends a Yankees farm team’s Game of Thrones-themed ballgame on Staten Island to raise money for wolves” to actually make sense…more or less.

Strange shit, but Martin’s seen stranger. “It’s pretty weird,” he told Rolling Stone, “but it’s only like a seven on the weirdness scale. That company that came out with leggings with my face on them? That’s up to a ten.”

The author’s used to athletics, despite the stereotypes. Martin’s a major sports fan (though he’s a normally a Mets man as far as baseball goes) and the regular rants he posts about the Jets and Giants on his old-school LiveJournal are infamous among fans who’d prefer he concentrate on fantasy rather than football.

According to Martin, the teams have taken notice, too. “A couple of days ago I was out at the Jets’ training camp. The GM showed me all around, he introduced me to players, I got the real VIP treatment. But a couple years ago, his predecessor, Mr. Idzik, traded away Darrelle Revis, who was the best player on the team. I blogged about it in a fury, like any other fan: ‘What the fuck is this clown doing? They should have gotten rid of him!’ I was just one blowhard fan among many, and then the next day it’s an article in the New York Daily News: ‘Game of Thrones Creator Calls for Idzik to Be Fired.’ I’m like, ‘Ohhhh, OK, I am really not just the loudmouth in the stands anymore.'” 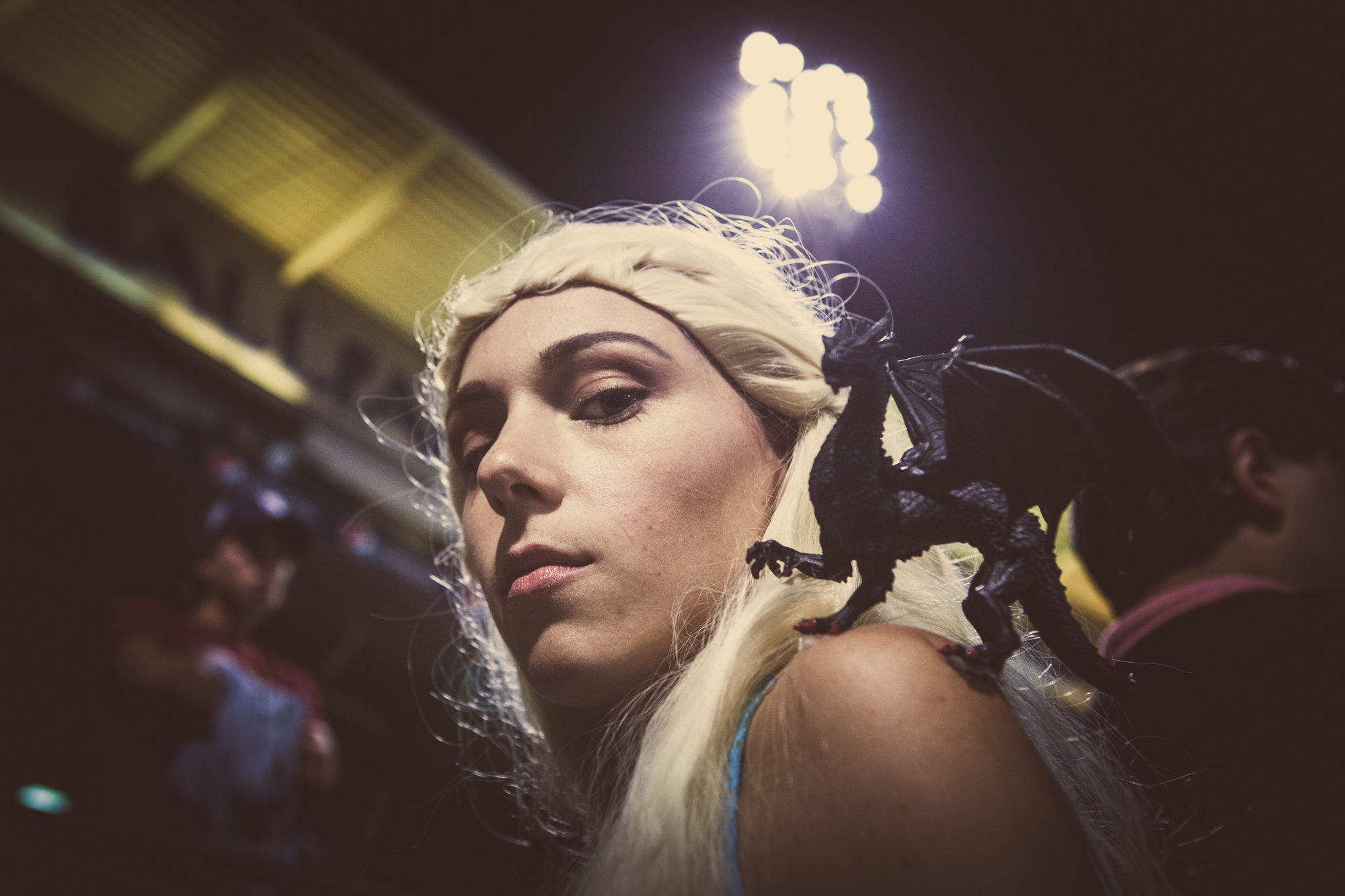 For the loudmouths in the stands on Staten Island, though, Game of Thrones gave them plenty to shout about. In addition to mixing selections from the show’s score into their usual soundtrack (note: When you’re attending a game based on the series that gave the world the Red Wedding, playing Ke$ha’s “Die Young” after every home run is maybe a bad choice), the team incorporated quotes and sound effects as color commentary on the plays. You haven’t lived until you’ve heard a stadium full of people greet every strikeout by the opposing team by taking a page from Cersei Lannister’s walk of shame and chanting “Shame! Shame! Shame!” in unison.

“In the Venn diagram of people that go to Staten Island Yankees games, or minor league baseball games in general, versus Game of Thrones,” fan Ryan Neal said, “I think this is slanted very heavily towards the Game of Thrones side.”

One glance at the crowd’s clothes, which were way more likely to advertise affiliation with House Bolton or Hodor than to sport pinstripes, could tell you that. At one gate, a cop from Staten Island’s 120th Precinct chatted up a woman in the midriff-baring costume of a Dothraki handmaiden. At another, a Yorkshire terrier out for a walk growled at the white wolf from a safe distance. Inside, fans waited on enormous lines for their chance to meet Martin or pose on a replica Iron Throne made from baseball bats. A pair of cosplaying Khaleesis got more attention walking around than visiting Yankee star Hideki Matsui got in the dugout.

But the players themselves took it all in stride. “Walking around outside, you saw two lines wrapped around the stadium,” Ethan Carnes, the Direwolves’ starting pitcher, said. “It’s pretty sweet to go out there and see a packed house. It’s almost like pitching in the big leagues.” If Game of Thrones put asses in seats, it didn’t matter if those asses were wearing chainmail. 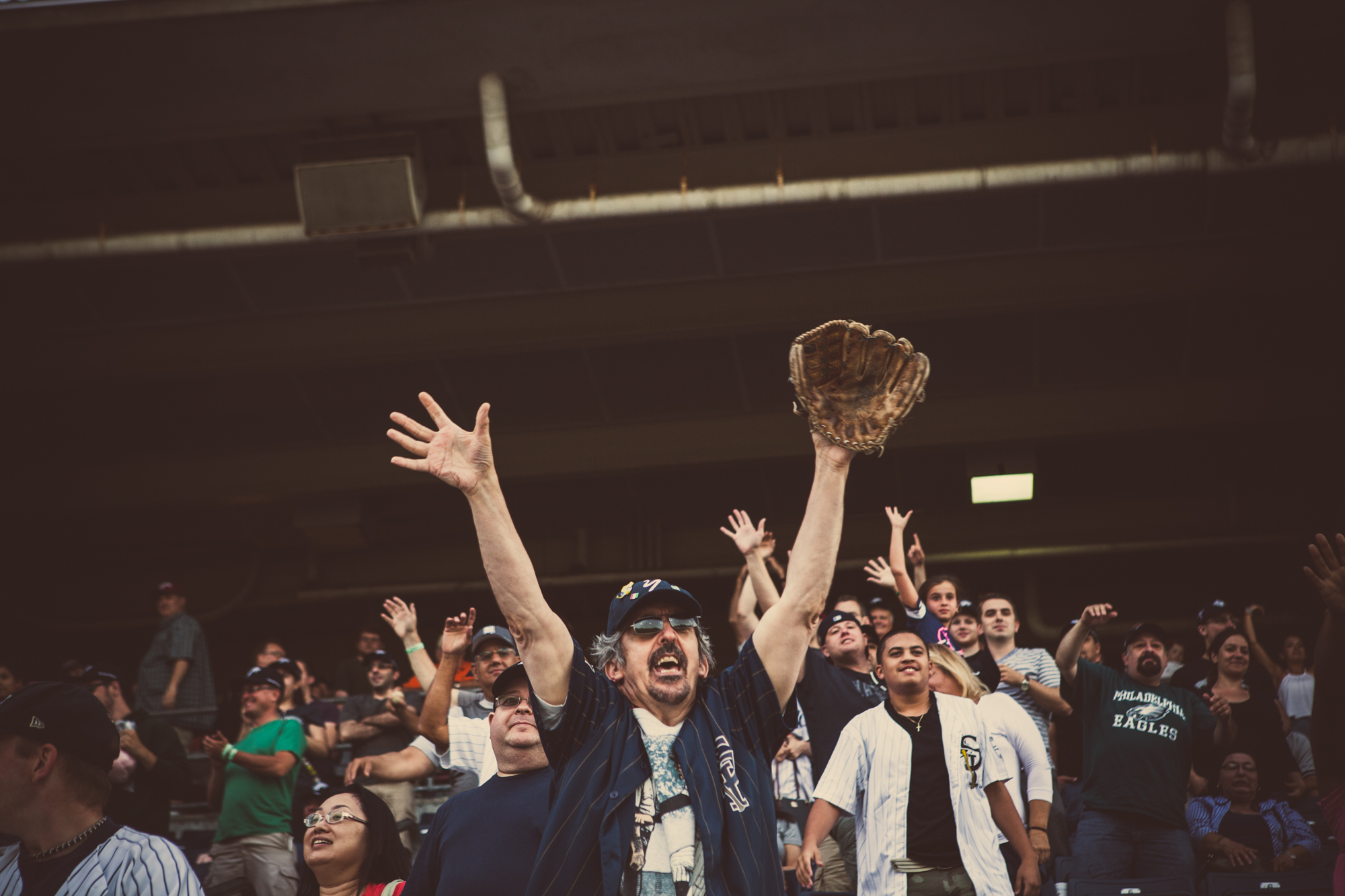 In a world where the zombies of The Walking Dead are so popular they get a second series and the Marvel Cinematic Universe can make a blockbuster out of Ant-Man, the Comic-Conification of America feels almost complete. But House Geek has yet to truly depose House Jock from the Iron Throne of cultural hegemony, if only because no one gets beat up in middle school for not being good at Magic: The Gathering. Perhaps the Staten Island Direwolves’ one and only outing represents not an invasion of the field of dreams, then, but a ceasefire – a utopian vision of baseball bats and Styrofoam swords held aloft not in conflict, but in unity.

But the real conquering hero was Martin himself, who looked thrilled for the distraction from the demands of finishing his eagerly anticipated next book. “And remember,” the author added as he left the field following his big appearance, “winter is coming.” A hint that the release of The Winds of Winter, the long-awaited sixth volume in the series, is imminent? Or just the savvy use of a catchphrase to make the crowd go apeshit? Only a maester could say for sure. But fans did get at least one unquestionably cathartic experience: For once, they watched House Stark kick House Lannister’s ass.