'Game of Thrones' Season 7: Who Died, Who Lived, What We Learned - Rolling Stone
×

If you picked a single image, a moment, a melee to sum up Game of Thrones Season Seven … well, you’d be nuts, to be honest. It may have only lasted seven weeks, but this was the most epic stretch of episodes in the history of the series, by a margin big enough to march an army of the dead through. Where would you even start?

The most obvious place would be with Daenerys Targaryen, in large part because she herself roamed all over the map. After spending years mired in the far-off lands of Essos, breaking the back of the slave trade as her three dragons grew to properly saurian size, she finally returned to her ancestral home. With her came an entire armada, helmed by an unlikely alliance of leaders – one that did not long survive her landing on the fortress island of Dragonstone.

In an attempt to win her war for the Iron Throne by conventional means, she deployed her fleet to the south and her army of Unsullied super-soldiers to the east. Both missions ended in disaster: Her ships were smashed by the pirate king Euron Greyjoy, who abducted her liaisons to two of the Seven Kingdoms; and courtesy of a ruse orchestrated by Lannister commanders Jaime and Bronn, her eunuch infrantrymen were led on a wild goose chase. Meanwhile, her royal enemies took out the ruler of kingdom number three, Olenna “The Queen of Thorns” Tyrell.

Only when the Mother of Dragons finally deployed her children against Jaime’s returning forces, accompanied by her unstoppable Dothraki cavalry, did she make any progress on the field of battle at all. And man, what a battle it was. The carnage left her advisor Tyrion shaken and his brother the Kingslayer ready to surrender.

They weren’t the only ones impressed by the literal firepower at her disposal. Adding to the peculiar mix of characters on Dragonstone, Jon Snow came calling with his advisor Ser Davos Seaworth in tow. There, they pled for her aid in defeating the Night King’s army of the dead, massing north of the Wall. But it was a tough sell, even to a woman who flew around on the back of a flame-throwing lizard all day. (And who grew more affectionate toward the King in the North by the moment.) As with the Lannisters and the dragons, Dany needed to see the menace for herself to truly believe it.

That was the intention of the daring (or demented, depending on your perspective) raid that Jon and his Magnificent Westeros Seven set out on beyond the Wall in the season’s penultimate episode. Lord Snow, the Hound, the now-cured Jorah Mormont, Brotherhood leaders Beric Dondarrion and Thoros of Myr, wildling leader Tormund Giantsbane and the royal bastard Gendry sought out the zombie horde in order to kidnap an undead footsoldier as proof of the existential threat on the horizon. When they got trapped by the ghouls and their demonic White Walker generals, the Khaleesi and her three children flew north to rescue them. This led to one of the series’ most eagerly anticipated showdowns: dragons versus zombies.

In this clash of ice and fire, Dany’s fire-breathers seemed sure to win the day – until the Night King tossed a spear into the beast named Viserion (after the Breaker of Chains’ abusive brother, you might note) and shot it down from the sky. The blow to what seemed like an unstoppable weapon in the fight against the dead was devastating. Worse still, their leader revived the slain creature as one of his zombie thralls.

At Winterfell, the action was less spectacular but no less tense. Left behind to rule in Jon’s absence, Sansa Stark found command came easily to her, despite her restless bannermen. The arrival of her long-lost siblings changed that. Now immersed deep into his new identity as the psychic Three-Eyed Raven, Bran Stark became a distant, disturbing figure. And while Arya got a relatively warmer greeting, her training as a killer by the Faceless Men assassins soon troubled the Lady of Winterfell. For good reason: Her little sister began the season by slaughtering every last man in House Frey as payback for the Red Weddings. The North remembers … and it is pissed.

In time, Sansa became convinced that Arya was plotting to kill her on Jon’s behalf and claim rule of the North for herself until his return – a paranoid thought fueled, as ever, by her scheming advisor Petyr “Littlefinger” Baelish. Or so it seemed. But their sibling rivalry, now the stuff of power plays and murder plots instead of food fights, was all a ruse. (C’mon – their brother is an all-seeing psychic. You think they were really gonna try and kill each other without him sounding the Stark family alarm?) The two sisters staged it in order to throw Lord Baelish off his guard, at which point the three Starks charged him with treason and executed him right there in the great hall. That’s one way to wipe the smile off that guy’s face. Maybe it’s the only way. 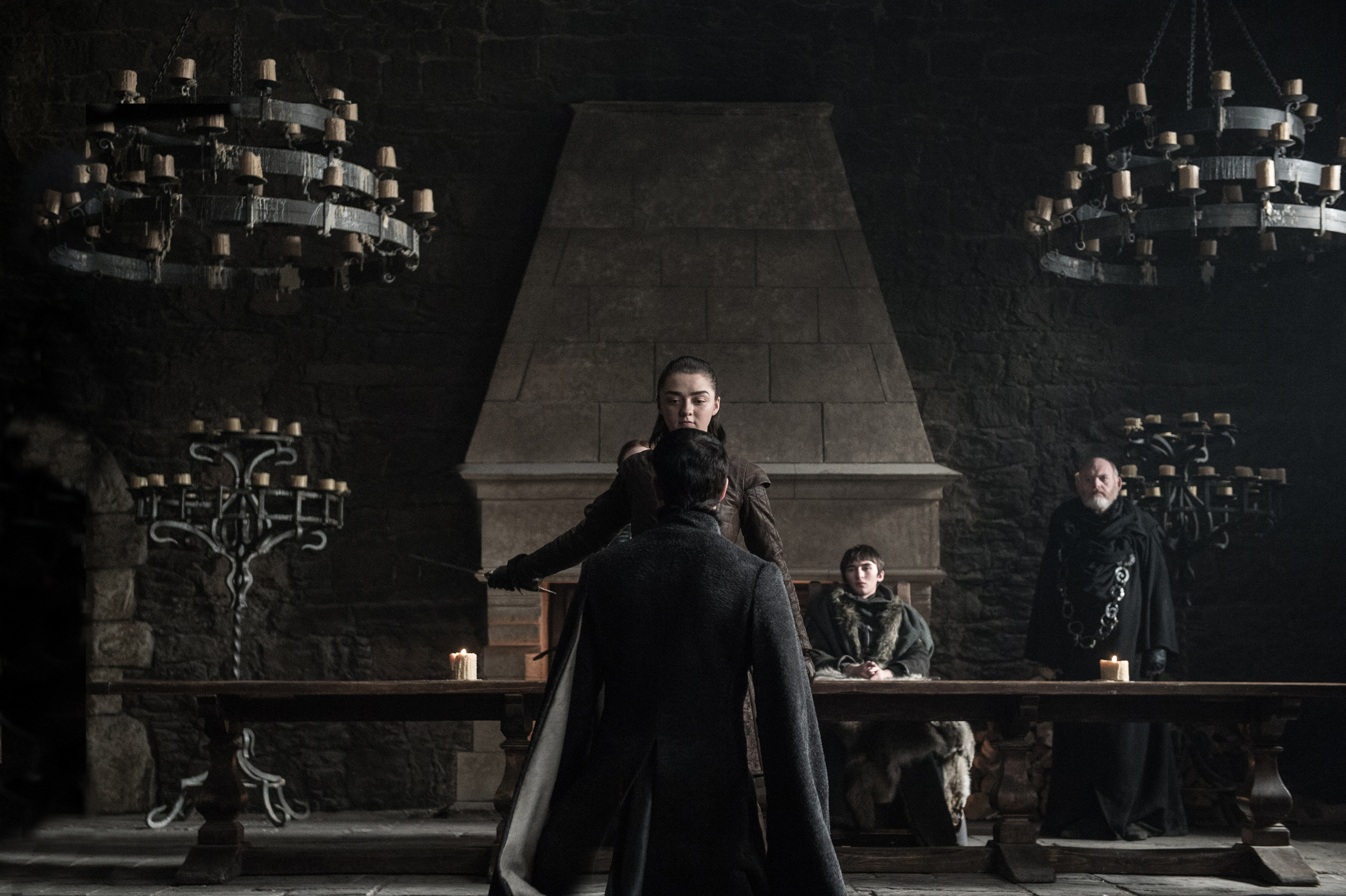 All of this led to the season’s spectacular wrap-up – one that tied together not just the plot but the themes underlying it. Early on, Sansa said she learned a lot from her time with Cersei Lannister. The finale proved it true. Like Lady Stark, the Queen of the Seven Kingdoms staged an elaborate scam on her enemies, staging a whole series of dramatic arguments and summit about-faces just to convince them she’d agreed to their truce. Satisfied, Daenerys and Jon sailed north to rally the forces of humanity at Winterfell – and on the way, their own, uh, forces of humanity took over as they finally hooked up. Snow had already told Dany she was his queen, in the sense that he would follow her instead of fight to keep his crown; now there’s a decent chance they really will reign together.

But the complications are adding up like zombie giants in a northern crowd shot. For one thing, Cersei was lying: She plans to withhold her army from the alliance after all, making what gains she can in the absence of Dany’s forces. Let’s sit out the coming winter as the various human and inhuman factions fight it out up North and puck up the pieces after, shall we? (This proves to be the last straw for her brother/lover, who rides off to join the fight on his own despite the unborn baby they conceived.)

For another, Bran and Sam finally spell out the truth about Jon’s parents in a montage (while the Lord of the North and the Mother of Dragons have sex, no less): He’s not Ned Stark’s son at all, but rather the child of Lord Eddard’s sister Lyanna and the late Prince Rhaegar. He not Lord Snow at all; he’s Aegon Targaryen, heir to the Seven Kingdoms. He’s not only warming his aunt Dany’s bed, in other words – he’s potentially ready to sit in her throne.

Finally, the Night King and his zombie dragon make their move. In a scene out of an epic Frank Frazetta painting, the monarch of the White Walkers and his reptilian revenant destroy the millennia-old Wall at its eastern edge. The army of the dead now begin to flow like a river into the lands beyond. It’s this image – not the triumphs of the Starks, the union between the King and the Queen or the unlikely love scene between Dany’s advisors Missandei and Grey Worm – that the season chooses to leave us with.

But to get back to our original question: Call us crazy, but for a definitive visual for Game of Thrones Season Seven, we’d rewind a few minutes to Jaime’s departure from his life in King’s Landing. As he rides away from the city, snow begins to fall, soon covering the familiar red roofs and imposing towers of the capital. The weather has proven his wisdom. Jon and Dany, Sansa and Arya, Tyrion and his big brother, even the freaking Hound, who spent most of the entire season bumping into people who once tried to kill him – everyone put aside their differences for the greater good.

There’s no riding out the storm that’s on its way. If you care about your family, your friends, your people and your world, you have to ride right into that storm and face whatever you find there. Only one season and six episodes remain before we discover what’s left when the snow melts and the smoke clears.

The 25 best ‘Game of Thrones’ episodes – from Blackwater to the Battle of the Bastards, the Red Wedding to “Hold the door.” Watch here.