After last night’s incendiary hour, Game of Thrones‘ shorter but still stunning Season Seven is now just past the halfway mark, and the stakes couldn’t be higher. The once-sprawling story is down to just three major factions now: King Jon Snow in the North,; Queen Cersei Lannister in the South; and Daenerys Targaryen, a.k.a. the Mother of Dragons,  on her native soil for the first time since her birth. The battles that followed eliminated entire houses and unleashed fire and blood on an unprecedented scale. Meanwhile, the White Walkers are prepping their own assault on Westeros – and if the war between humans continues, that attack will be impossible to resist.

'Game of Thrones' Recap: Fire Walk With Me

'Game of Thrones': Five Questions We Need Answered in Season 7

In this status report that catches you up on all the major players, you’ll find the intel you need to prepare for the four episodes that remain … and the winter that’s about to hit.

WHO’S DEAD
At this stage in the game, it’s not just people who are getting knocked off the board – it’s entire clans. The season began after the fall of House Bolton, which had destroyed the last vestiges of House Baratheon before Jon Snow’s wildlings and Littlefinger’s Knights of the Vale defeated them during the Battle of the Bastards.

This season, you can add House Tyrell and its Queen of Thorns, Lady Olenna, to the ash heap of history. A surprise attack by Jaime Lannister’s forces quickly conquered her ancestral castle Highgarden and claimed her life. (Though not before she was able to brag that Jaime isn’t the only Kingslayer in town, since it was she who oversaw the Purple Wedding-poisoning of his son Joffrey.)

The situation for Dorne is only slightly less desperate. Ellaria Sand, the mistress of the late Prince Oberyn “the Red Viper” Martell, now languishes in the dungeons below the Red Keep. Two of her “Sand Snake” daughters fell in combat against the Lannister’s latest sketchy ally, King Euron Greyjoy of the Iron Islands. The third sister, dagger specialist Tyene, was brought back to King’s Landing in chains along with her mother. Cersei then dosed the young woman with the same poison her mom used to kill the royal daughter Myrcella, chaining the two up in the same cell so Ellaria will be forced to watch her flesh and blood perish before her eyes.

WHO’S ALIVE
Despite these momentous power shifts and the plot’s breakneck speed, the body count among main characters has been surprisingly low so far this season. Cersei still sits on the Iron Throne, and plans to use Highgarden’s gold to help her repay the sizeable debt she owes to the Iron Bank of Braavos. Like her rival Ellaria, she too has lost all three of her children, though her loss doesn’t seem to bug her all that much anymore. (A bad sign, this.) Also seen slithering around the capital city is Euron Greyjoy, who returned to a hero’s welcome after defeating Dany’s navy at sea.

In the North, a series of spectacularly unlikely and uplifting reunions have made House Stark’s position stronger than it’s been in years. In addition to the return of the newly crowned King in the North, Winterfell has welcomed back its wayward children Sansa, Arya and Bran – though between Arya’s frightening skill as a killer and Bran’s insistence that he’s left his old life behind to live as the powerfully psychic “Three-Eyed Raven,” conversation around the dinner table is likely to be tense.

The Northern leaders also include wildling chieftain Tormund Giantsbane, dispatched to help the Night’s Watch man the Wall; Bronze Yohn Royce, a barrel-chested Lord of the Vale who seems a good deal more trustworthy than his nominal liege “Littlefinger”; Lord Baelish himself, busy manipulating the Stark children by giving Sansa advice and Bran the Valyrian steel dagger once used in an assassination attempt him; Brienne of Tarth and her loyal squire Podrick Payne; and supremely cool young Lady Lyanna Mormont, the tweenage ruler of Bear Island and a powerful voice at the King’s Council.

However, the group no longer includes Bran’s one-time protector Meera Reed, who’s leaving to rejoin her family in the swamplands called the Neck. Nor did Arya’s direwolf make the journey home with her one-time master; the beast chose to stick with its adopted pack instead. (Note: Jon Snow’s white direwolf Ghost is still around, though unseen for editing reasons.) Neither did her former running buddy Hot Pie, who though alive and well, didn’t join her to become Winterfell’s cook either.

Meanwhile the King himself, and his hand Ser Davos Seaworth, have departed south for Dragonstone – the seat of an all-new team on Westeros’s field of play. That would be the alliance led by Daenerys Targaryen and her staff of advisors: translator/confidant Missandei; Unsullied general Grey Worm; Tyrion Lannister, the Hand of the Queen; Lord Varys, her director of intelligence; and more Dothraki than you can shake a spear at. While Jon has proven reluctant to bend the knee at the Khaleesi’s request, he has at least convinced her to let him to mine the dragonglass he’ll need for weapons against the army of the dead. 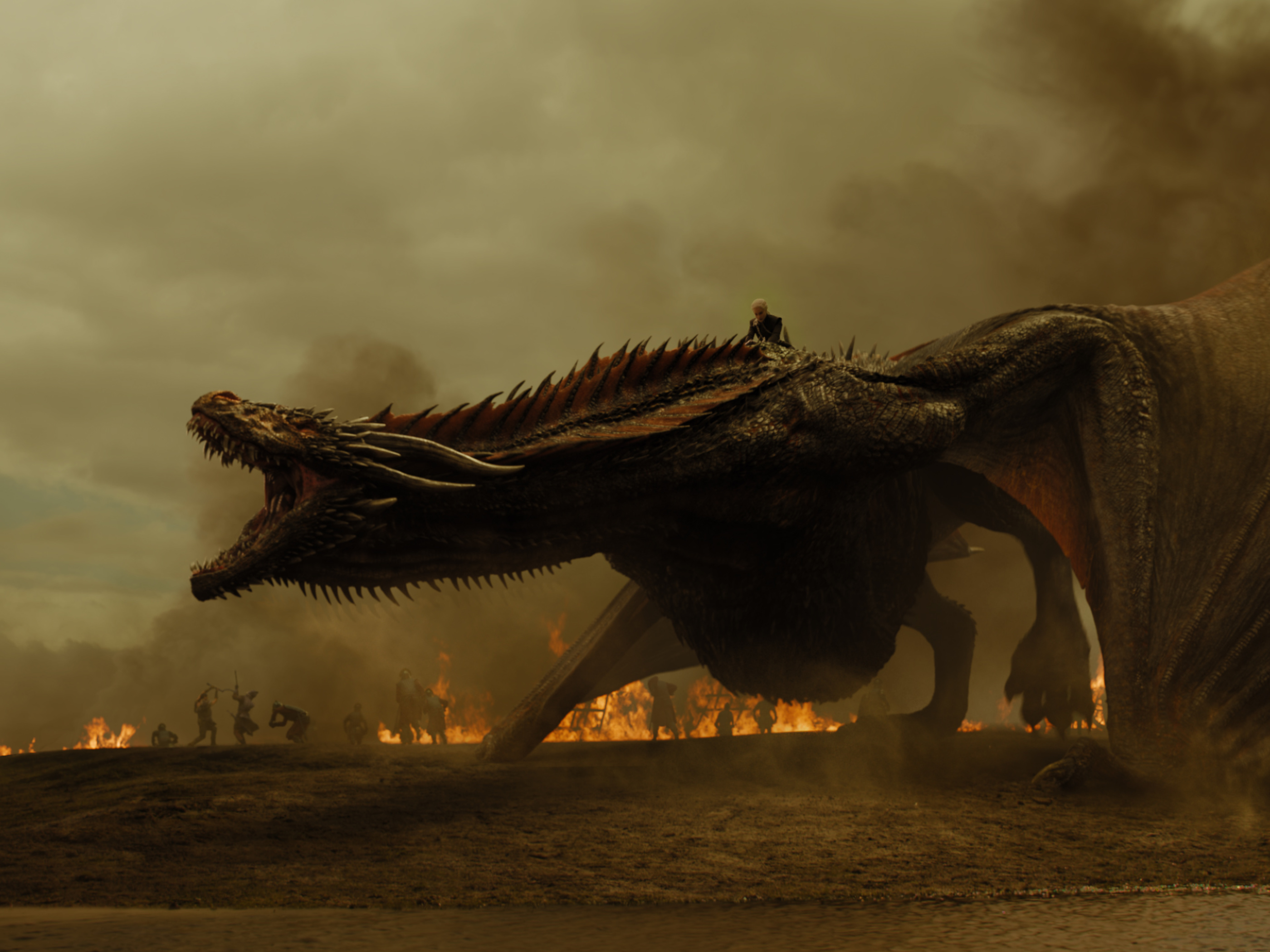 The Queen’s forces, meanwhile, are scattered across the Seven Kingdoms, with varying degrees of success. Her admiral, Yara Greyjoy, was captured by her mad uncle in the same battle that cost her Ellaria and the Sand Snakes. Grey Worm and his Unsullied took the Lannister stronghold of Casterly Rock, only to find it empty of loot, abandoned by most of its soldiers and besieged from the sea by Euron’s fleet. However, the Queen herself and her Dothraki horde just mounted a horrifically effective attack on the army led by Ser Jaime, destroying the bulk of Cersei’s fighting force in one fell swoop. (Well, technically it was several fell swoops, courtesy of her largest dragon, Drogon.)

And while most of the cast is consolidated in three basic groups around Jon, Dany and Cersei, a few other factions are still at play. Sandor “The Hound” Clegane is riding north with Lord Beric Dondarrion, the red priest Thoros of Myr and their do-gooding Brotherhood to join the fight against the White Walkers. Samwell Tarly is toiling away in the Citadel, studying under the stern Archmaester Ebrose and straight-up saving the Khaleesi’s one-time ally Ser Jorah Mormont, stopping the spread of the gruesome greyscale plague before it could claim his sanity or his life.

Finally, it’s a little weird to list these guys in the “alive” section since, after all, they’re technically undead. But the Night King, his fellow White Walkers and their increasingly massive Army of the Dead (both in sheer numbers and in the size of its freakin’ zombie giants) are marching toward the Wall. Jon suspects they’re headed for the fortification’s most remote outpost, Eastwatch-by-the-Sea – a theory confirmed by the Hound’s visions in Thoros’s magical fires. The icy enemy will find Tormund and the wildlings waiting for them there, but will that be enough to stop them? With four episodes to go, we kinda doubt it.

WHO’S MISSING IN ACTION
After last night’s conflagration on the road to King’s Landing, this list lengthened considerably. As of this moment, we don’t know if Jaime, his mercenary pal Bronn, his ally Randyll Tarly or Randyll’s jock-ish but kind son Dickon (LOL, sorry) made it out alive. Expect some resolution next week.

Then there’s the strange case of Melisandre, the psychic priestess who advised Daenerys to seek an alliance with Jon Snow. Her job done, she quickly departed to avoid confrontation with the King and Ser Davos, who hates her for her role in the murder of young Princess Shireen Baratheon. The Red Woman told Varys she was headed for Volantis, where her religion has gained a major following among the city’s many slaves, and that she would return to die in Westeros – just like the Spider himself. Creepy, man.

WHAT’S THE BIG PICTURE
With winter upon them and the White Walkers on the way, the show’s anti-war subtext has become its primary storyline. Characters like Jon, Davos, Bran and even Melisandre have made it clear that every battle between human factions both distracts from the true threat and weakens humanity’s defense against it. Tyrion hasn’t seen the Army of the Dead … but he knows Westeros can’t abide another Mad Monarch; like the King in the North, he’s advised the Khaleesi against attacking civilian population centers. All of this makes the continued presence of goons like Euron in the South and Littlefinger in the North more of a threat than ever: Concerned only with power, they’re playing a game that will change any day now, their eyes forever on the Big Picture.

Watch Rob Sheffield revisit ‘Game of Thrones’ most gamechanging moments – from the Battle of the Bastards to the reddest wedding of them all.