'Feed the Beast': Everything You Need to Know - Rolling Stone
×
×

Ever since AMC debuted Mad Men in July of 2007, TV aficionados have learned to keep an eye on what the channel slips onto the air during the dog days. Past summers have brought the likes of Humans and Halt and Catch Fire; the same time frame also brought us Rubicon, because hey, nobody’s perfect. This year’s contender for possible out-of-left-field MVP is Feed the Beast: a drama about crime and cuisine starring Jim Sturgess as a coked-up ex-con chef and David Schwimmer as his morose sommelier best friend. Developed by former Dexter showrunner Clyde Phillips and adapted from the Danish series Bankerot, the show tracks the troubles that two down-and-out dudes have in opening a new restaurant in a low-rent area of the Bronx, where crooks of all stripes demand a piece of the action.

40 Greatest TV Villains of All Time

The title comes from the name of the heroes’ eatery, Thirio, which is a Greek word meaning “beast”; consider that an amuse-bouche to prepare you for this Sunday, June 5th. Here’s everything else you need to know about Feed the Beast:

The “Schwimmer-aissance” is for real
You better believe that AMC’s executives were getting giddy earlier this year when FX’s The People v. O.J. Simpson: American Crime Story became a smash hit, and reminded people how much they once loved David Schwimmer. With his sympathetic performance as Simpson’s morally conflicted buddy Robert Kardashian, the actor had his biggest moment in the pop culture spotlight since the end of Friends. The former sitcom star now carries that momentum into Tommy Moran, a widowed father grappling with a drinking problem and struggling to raise his traumatized young son.

Here’s Tommy in a nutshell: He’s the kind of guy visits his late wife’s grave every day to tell her about what’s happening in his life — and then lies to make it sound like everything’s going okay. He’s moody but scrupulous, and bears the psychic scars from having been raised by an abusive father with criminal ties. In other words, he’s the soul of this show, and Schwimmer seems to have found the next step in terms of capitalizing on his ACS triumph.

Jim Sturgess is crazy-charismatic… or perhaps just “crazy”
The British actor is hardly a household name here in the U.S., although fans of his movies Across the Universe and Cloud Atlas have been keeping an eye on him for a while. His performance as Dion Patras is likely to be divisive, given that the character is an archetypical destructive genius. In one of the show’s first scenes, Dion takes a bump of cocaine and has sex with his lawyer … in a prison holding cell, while in the process of getting discharged. Later, he strikes a deal with the local mob to get his restaurant off the ground, and agrees to let them kill his friend Tommy if the joint goes bust. 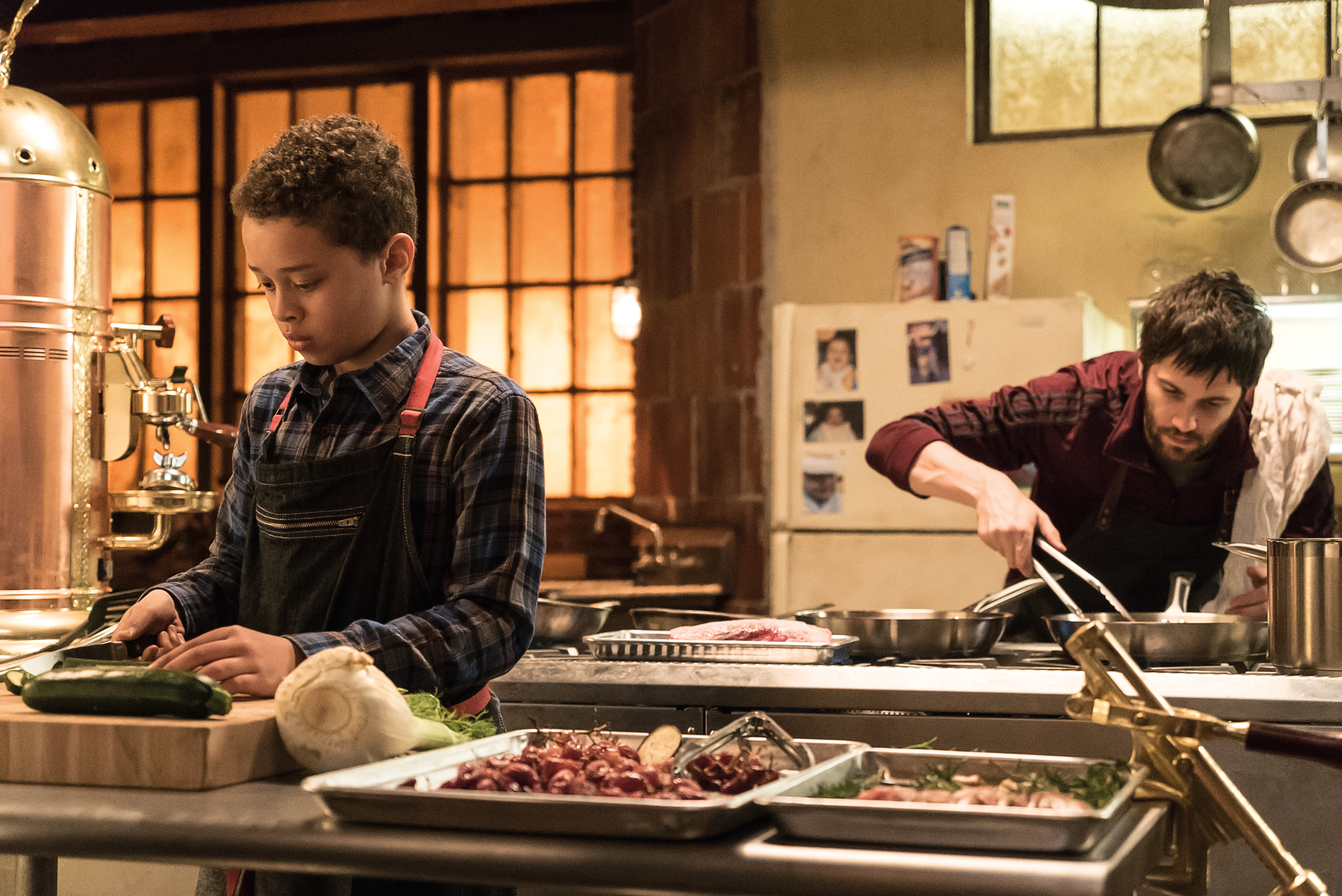 Sturgess plays this driven idiot with a wiry energy, coming across a little like the American character actor Jeremy Davies, only cranked up to 11. Nearly every time he’s on the screen, Dion is spending money he doesn’t have, making promises he can’t keep, and snorting the drugs he’s supposed to be stashing for the mafia. It’s hard to take your eyes off of him — and even harder to like him.

The supporting cast features a few great “oh it’s that guy” ringers
Even devoted Mad Men fans may not immediately realize that the actor playing Beast‘s main antagonist — the sadistic criminal enforcer Patrick “The Tooth Fairy” Woichik — is the same fellow who was Sterling Cooper’s pompous copywriter Paul Kinsey. And Michael Gladis isn’t the only familiar face who pops up on the show: Tommy Moran’s rich, mean-spirited dad is played by John Doman, a.k.a the prickly police boss William Rawls on The Wire and Don Carmine Falcone on Gotham.

Both the Tooth Fairy and the elder Moran have a stake in the future of Thirio, and different ideas about how the place should be run. Meanwhile, everyone’s long-term plans are threatened by a vendetta held by a rogue NYPD detective, played by Michael Rispoli (The Sopranos‘ Jackie Aprile). So that’s three brutish S.O.B.s, all taking turns as this show’s Big Bad.

Is the Bronx another “character” in this story?
Yes, it’s a cliché to call any TV or movie location a “character.” But it’s hard to avoid when a show integrates an area into the plot as frequently and effectively as Feed the Beast does with this particular NYC borough. Part of the central premise is that Tommy and Dion are nuts for trying to open a restaurant in a part of the city better known for drug dens than fine dining. The low expectations that come with the locale allows them to get Thirio operational cheaply and quickly — though not without the involvement of the neighborhood’s highly shady characters. The first episode’s stylishly shot and edited mini-history of the Bronx’s development and ethnic factions sets the tone for a series that takes full advantage of crumbling buildings and colorful personalities.

It’s like Kitchen Confidential meets Halt and Catch Fire meets — believe it or not — Daredevil
In its early episodes, Feed the Beast reveals that it has a lot in common with other prestige dramas about deeply flawed middle-aged men (and the cartoonishly evil criminals who plague them). But the show also sports an unexpected array of influences and associations. The culinary angle obviously recalls various restaurant tales, from movies like Chef, Burnt and Ratatouille to the sitcom version of Anthony Bourdain’s memoir Kitchen Confidential. And the “two pals defy the odds to start a business” theme is a lot like AMC’s own Halt and Catch Fire, with a touch of HBO’s underrated How to Make it In America.

But what might catch viewers by surprise is how simpatico this series is with gritty contemporary crime sagas like Sons of Anarchy (whose Liz Sagal is a writer on Beast) and, yes, Daredevil; Michael Gladis’ take on the Tooth Fairy even recalls Vincent D’Onofrio’s Kingpin. Whether viewers who tune in for a story about foodies will stick around through all the sex, drugs and violence remains to be seen. But never let it be said that the show’s nastier edges aren’t on-brand for the network. More than anything, this show may end up reminding people of Breaking Bad, in that it’s also about folks who make ill-advised decisions and then scramble to cover for their mistakes.

And when did Breaking Bad premiere, you ask? In January of 2008, with very little hype. Undoubtedly, AMC would be thrilled if their latest off-season offering followed a similar path.