A desk sits in front of a golden curtain. An announcer calls out, with customary TV announcer enthusiasm, “It’s the Eric Andre Show!” Then the show’s namesake, comedian Eric André, leaps through the back wall of his set. After charging across the studio and yelling out a barbarian war cry, he tackles the drummer of his jazz combo. From there, it’s a blur of carnage that’s different every episode: André eating fistfuls of dirt from his potted plants, teabagging a bound crew member or fighting off attack dogs. Occasionally, he’ll get maced by a passing cop as he tries to self-immolate, Buddhist-monk style. It’s as though a feral mental patient is awakened from a bad pharmaceutical binge and shoved onto the set of a talk show. And these are just the opening credits.

Adult Swim’s The Eric Andre Show (no accent on the e in the title) is a lot things: A tumult of stunts and bits that plays like an 11-minute punk aria; a sharp rebuke to the forced politeness and feigned enthusiasm of mainstream TV talk shows; a test of endurance for former reality-TV and child stars; and a nightmarish funhouse that swallows everyone involved, cast and crew included. Once André has finished his introductory tantrum, the set calmly reassembles itself. He must give a monologue despite having not read the news, withstand the jabs of his aloof co-host Hannibal Buress, and indulge an endless list of middling celebrities, all to please some invisible but audibly unimpressed crowd. No wonder Andre goes absolutely apeshit at the beginning of every episode. This is not a talk show, it’s a torture chamber dressed up to look like an Eighties public-access oddity.

“I think when the series ends, I should die,” André says, enthusiastically. “I always tell people I want to be like R. Budd Dwyer, and blow my brains out on the show.” In bringing up the Pennsylvania State Senator who shot and killed himself during a press conference, André is not talking about the demise of his character — Andre-the-host has been obliterated in more ways than Wile E. Coyote and always bounces back. But according to its creators, the show should always feel like it’s about to implode in some frightening way. “Things that want to fall apart…for us that’s where the joke is,” says co-creator Andrew Barchilon. “You don’t just run with it; you push it over the cliff.” 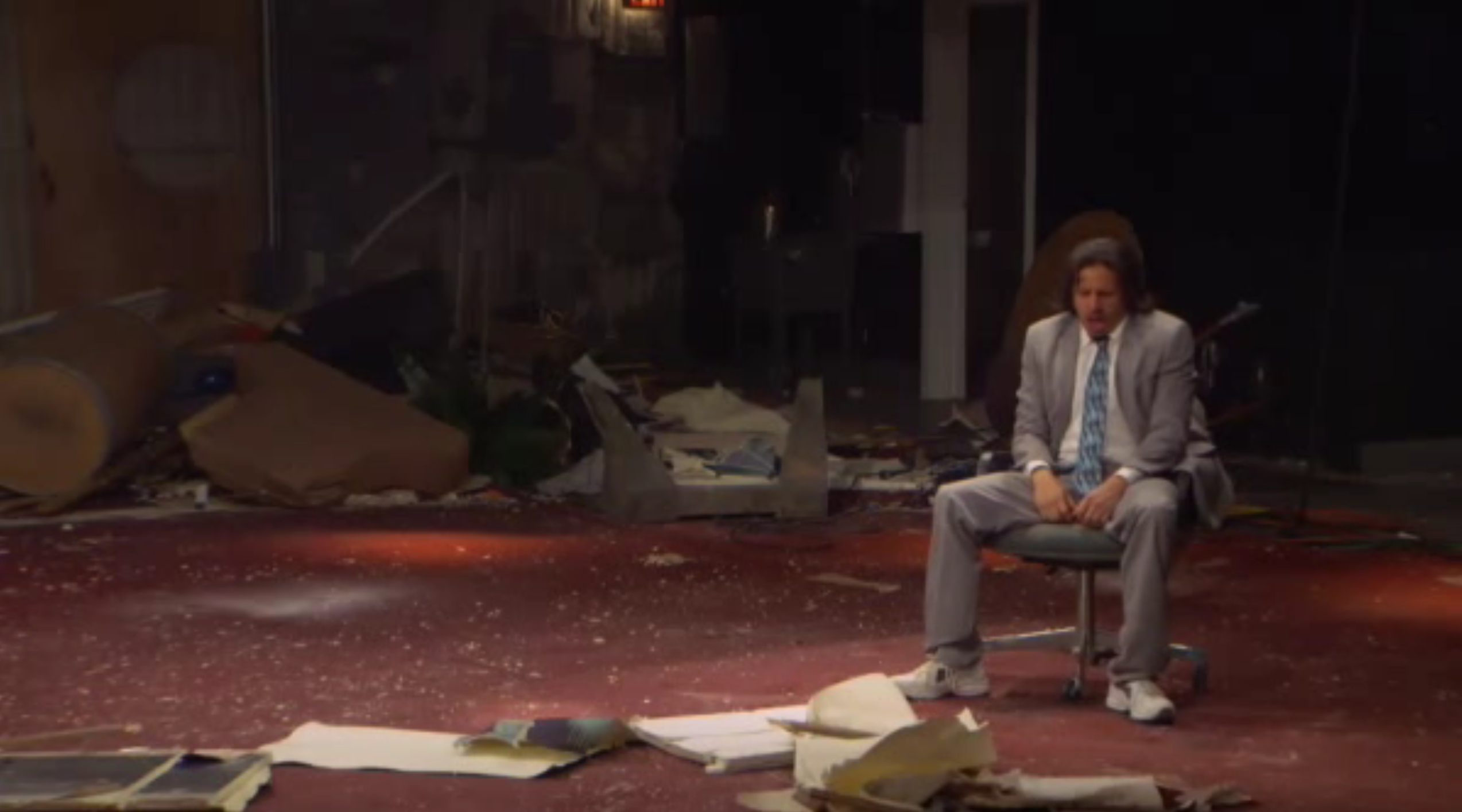 While The Eric Andre Show‘s first two seasons gleefully dove head first into a comic no-man’s-land, the closer the start date for production on the show’s third season approached (it will premiere on November 6th), the more everyone felt the pressure to, as André puts it, “up the stakes and get in more trouble.” While field-report bits like crashing a Mensa convention or pretending to be a slave during a Civil War re-enactment pushed buttons, the team’s new exploits more than succeeded in finding the elusive “trouble” Andre was seeking. After dragging a huge, human-shaped garbage bag leaking blood through New York’s Chinatown, the host and the crew were met with two police cars, an ambulance and a fire truck. On top of the disturbance, they hadn’t wanted to waste $300 of a meager budget on a filming permit. In another instance, André splashed Fruit Loops and milk all over commuters on a subway car and was convinced he was going to be assaulted by two different people. “It was the hottest day of the year and the milk reeked,” André says, “They just thought I was a lunatic.”

I think when the series ends, I should die. I always tell people I want to blow my brains out on the show.

Potential guests now know more about the show than they did at its inception, but like Sacha Baron Cohen’s “journalist”/clueless B-boy Ali G, Eric André’s host character fares better when his visitors don’t do their research. As the gonzo comedian slops down spaghetti, masturbates or unexpectedly body slams a stagehand, the baffled, bemused or horrified showbiz types — most often those from the middle echelon of celebrity, though an occasional A-lister like Seth Rogen will find himself in the hot seat — give the best reactions. “It’s half social experiment, half psychological torture,” André confirms, and how each person responds makes the show a sort of Rorschach test. A highlight of the upcoming season features former The Hills star Lauren Conrad somewhat gamely enduring Andre chainsawing through his desk and talking about buttplay; once he slurps up his own vomit, however, Conrad cries, “Nope,” and walks. “She’ll probably forever hate me, but I think she’s fantastic,” André says. 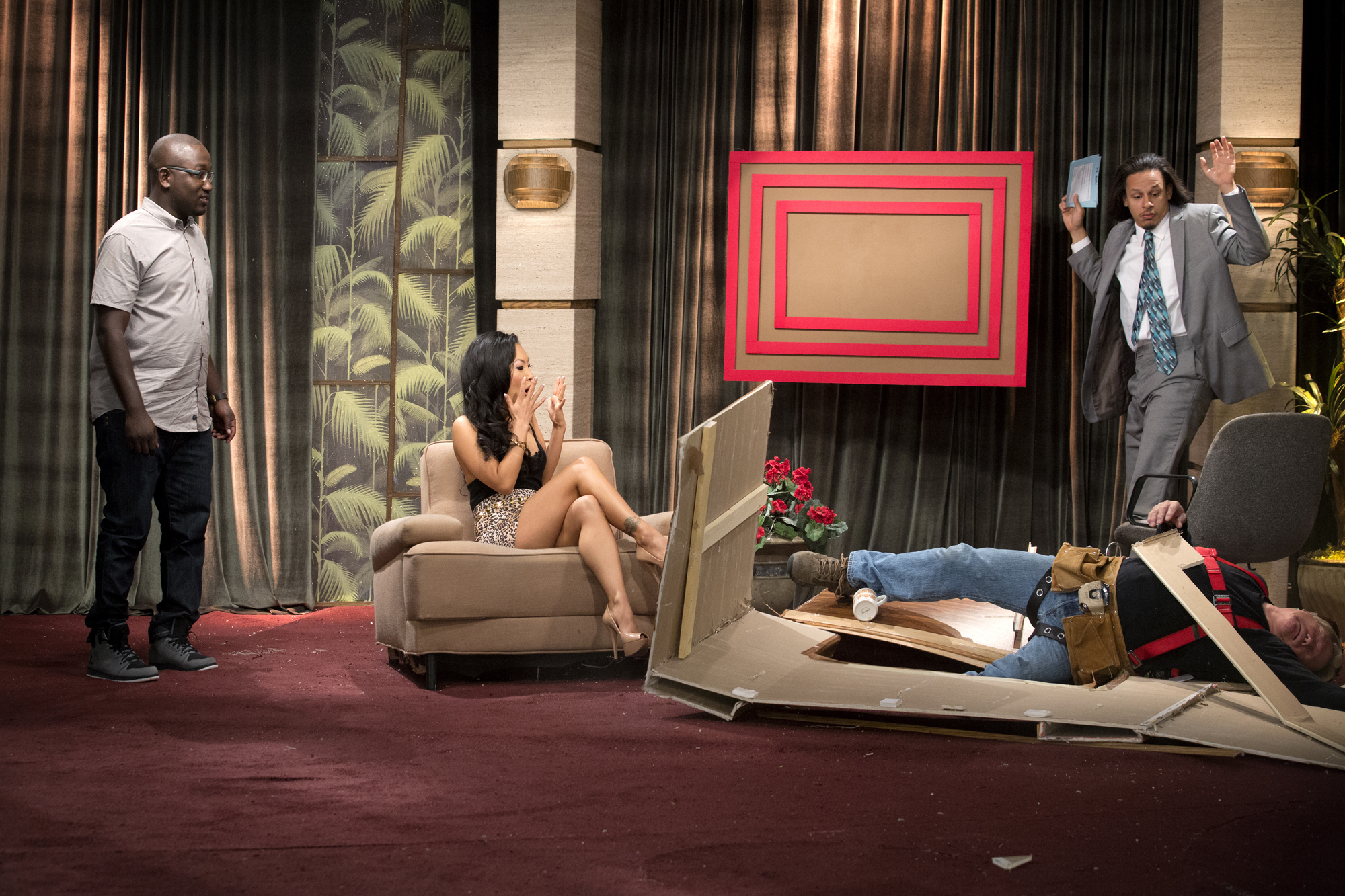 Guests are left onstage under hot lights without direction; from there, what co-creator Kitao Sakurai identifies as “Vietcong interrogation tactics” might include: dripping water torture from above; dogs’ shock collars buried in the guest chair; and simulated sex acts happening between staff members just off-screen. “We almost always use the first moment of an interview,” says Barchilon, “And then we skip to the end, when they’re exhausted and confused. That’s where the gold is.”

André maintains that his “razzing” isn’t rudeness, but more of a reflection of the sheer ineptitude of his character. Fans may have a hard time separating Andre from the berserker host he plays, though offstage, he’s a “very kind and thoughtful person,” as Sukurai puts it. He meditates to keep himself grounded off-set, and describes himself as often nervous despite the intense risks of his comedy. “I’m fucking terrified,” he says, in regards to pulling off the show’s WTF stunts, “I don’t conquer my nerves, I’m just running toward a grizzly bear and it’s fight or flight.” He pauses. “It’s very painful while doing it…but I know it’s going to be funny.”