Forty years ago this week, Dallas premiered on CBS – and changed TV history forever. At a time when network television was staid and dull, this Lone Star Peyton Place came on as a totally shameless melodrama full of sex, money, bad blood, family feuds, cowboy hats and shoulder pads – the first, best and most splendidly ridiculous of the prime-time soaps. It spun the saga of the corrupt Ewing family and their Texas oil empire, as they wheeled and dealed through bedrooms and boardrooms, running from 1978 to 1991. And what a cast – a dream team of veteran character actors plucked from Westerns and noirs and every style of pulp flick, chewing all this scarlet dialogue like so much Skoal. No learning, no moralizing, not a moment of subtlety. Dallas was not only the most Seventies show of the Seventies. It was, more importantly, the most Eighties show of the Eighties.

In our sophisticated post-Peak TV times, it can be easy to overlook how revolutionary Dallas was – going for long-term, week-to-week serial storytelling at a time when it just wasn’t done, leaving no absurd plot twist untweaked. The Ewings invented the template for modern classics like The Sopranos, Mad Men and Breaking Bad. And at the center of the storm stood Larry Hagman as the grinning villain J.R. Ewing, who became an American icon. “Isn’t that bizarre?” Hagman asked me in 2012, shortly before his death. “I could never understand the appeal of that character. I don’t get it. My favorite J.R. line was, ‘Once you get rid of integrity, the rest is a piece of cake.’ And lemme tell ya, it’s true.”

Hagman was the son of Broadway star Mary Martin and a Texas rancher, and he brought both legacies to Dallas. “J.R. could swagger, but he wasn’t a real cowboy … When I read a script and see the words ‘our hero slogs through the mud and muck in the wilds of Minnesota,’ I close it. When I see the words ‘our hero steps out of the limo with a bottle of champagne and a beautiful woman on his arm,’ I say, ‘Okay, I’m kind of interested.'”

When the show debuted in April 1978, it was a five-episode miniseries devoted to two young lovers caught up in blood feuds. Rich boy Bobby Ewing (Patrick Duffy) marries Pam Barnes (Victoria Principal), a bad girl from the wrong side of the tracks, and brings her home to Southfork Ranch, where his fucked-up family suffers together. Since the Ewings and Barneses are sworn enemies, Bobby and Pam play Romeo and Juliet – over the years, they remained almost nauseatingly faithful. Which was not really an issue for anyone else on the show.

More than anything, it was the actors that made Dallas great from the start. None were stars – mostly they were Hollywood vets who’d kicked around for years, taking their failed shots at fame and fortune, still hungry for a chance to strut their stuff. Jim Davis, the crusty oil baron Jock Ewing, had saddled up in some 150 Westerns; he was Bette Davis’s leading man in the 1946 flop Winter Meeting, legendary as perhaps the very worst film Bette ever made. Barbara Bel Geddes, the fierce matriarch Miss Ellie, played Jimmy Stewart’s best friend in Vertigo. Linda Gray starred in the Norman Lear sitcom All That Glitters, as one of TV’s first trans characters. Victoria Principal was a Seventies ingenue (and former Sinatra flame) with a danger-girl aura, playing the biker chick in the disaster movie Earthquake. As for J.R. himself, Hagman had shown up everywhere from the kitsch comedy I Dream of Jeannie to the quintessential Seventies cult flick Mother, Jugs and Speed, where he’s a rhinestone cowboy who tries to seduce Raquel Welch with Cat Stevens tickets. (Bill Cosby is Mother and Harvey Keitel plays Speed. You can probably guess which one is Welch.)

The premise was remaking The Godfather, with the Ewings modeled on the Corleones – a family empire ruled by a hard-ass patriarch who realizes he’s raised his sons as monsters. But Dallas had something crucial the Oscar-winning mob movie largely lacked: females. No other TV drama had such charismatic, impossible, tyrannical, unsilenceable, demanding and utterly unmanageable women. Linda Gray’s Sue Ellen was one of the most eloquent weepers in the history of mascara. Victoria Principal’s Pam had a voice that made her a tenor of trembling rage. Morgan Brittany’s Katherine spent a large amount of time making doomed bedroom eyes at Bobby Ewing. (Her brother-in-law, yet also her forbidden lust object. Until she guns him down. Then tries to kill him in the hospital with a lethal injection. Then runs over him with a car. Love hurts.) 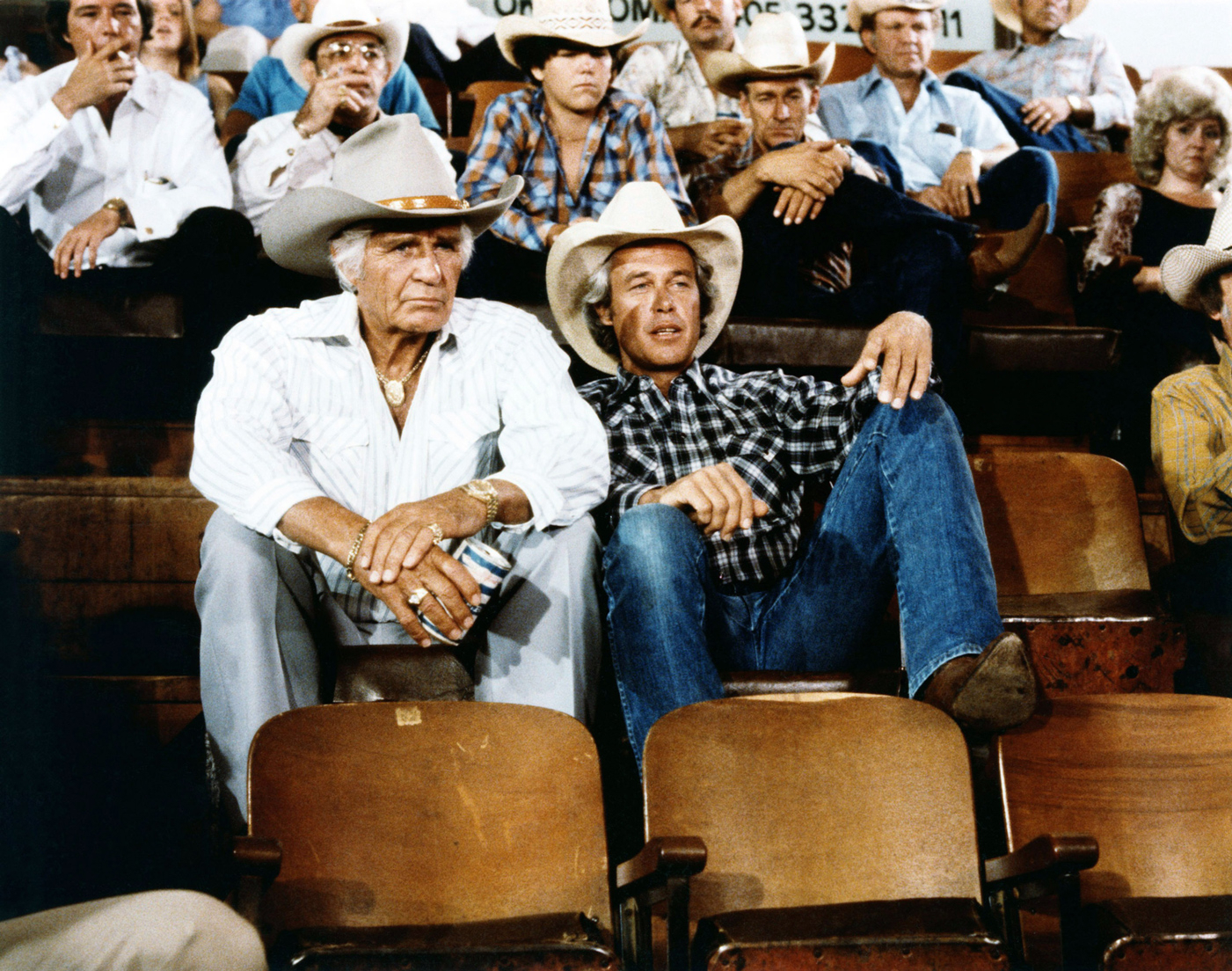 I was an obsessive Dallas fan, a condition that never wore off. I still talk like Sue Ellen when I get mad. I have ruined perfectly nice conversations because I couldn’t help gushing, “I’ve been a fan of your wife ever since she was on Dallas – you know, on Season Two, when she’s the pregnant teenager who sells Sue Ellen her baby?” (My apologies, John Slattery. But Talia Balsam is truly a boss.) J.R. and Sue Ellen became one of the most royally dysfunctional couples in TV history. (“You gave me quite a surprise this evening – you managed to maintain a certain decorum.” “Sorry to disappoint you, darling.” ) As Hagman explained, “When it started, J.R. was really a secondary character. J.R. and Sue Ellen would be standing in the back of the scene, without anything to say, so we would make up our own dialogue – just bullshit like, ‘Damn it, Sue Ellen, my button fell off my shirt, what the hell is wrong with that butler.’ And then they’d watch the dailies and see the two of us and say, ‘What the fuck are they doing back there? We have to do something with those characters.'”

The third season was supposed to end with a deathbed murder confession from Pam’s daddy, Digger Barnes. But with the show booming in the ratings, CBS begged for two more episodes, so the producers came up with a last-minute twist: In the final seconds, J.R. was gunned down in his office by an unseen assassin. “Who Shot J.R.?” became a global obsession in the summer of 1980, even if it was never much of a mystery: Everybody knew it had to be that bloodthirsty vixen Kristen, Sue Ellen’s baby sister, who connived her way into J.R.’s bed (not the most difficult destination to connive her way into).

It was peak of Dallas‘ golden era – and then came the infamous Dream Year, the most shameless narrative cheat in TV history. When Patrick Duffy quit at the end of the eighth season, his character Bobby got killed off. The next season reached a fever pitch of bizarre twists, until the finale when Pam woke up in her bed, walked into the bathroom … and saw Bobby in the shower, wearing nothing but a smile as he said, “Good morning!” Say it with us: The whole season was all a dream! On one level, this was a stupendous fraud – but in practice, it worked brilliantly. Watching this episode, without knowing what was coming, audiences spent the last 20 minutes saying “What in Sam Hill is going on here? J.R.’s Nicaraguan gangster mistress is firebombing the Ewing Oil offices? Half the cast just died?” until Pam woke up. If you were the kind of viewer who disapproved, you probably weren’t a Dallas fan anyway. During the next season, it was Pam’s turn to get blown up, in yet another freaking car crash. To this day I’m still not entirely sure she isn’t coming back.

From the very beginning, Dallas gave off a vivid sense of hedonistic excess, which might have something to do with the set’s legendary non-stop carousing. “God, it was a good time,” Hagman said. ” The first season, it was winter 1978, and the weather was terrible. We didn’t have real trailers, because Lorimar was pretty chintzy – they wouldn’t even give you a trailer with a john in it. So I had a breadtruck that I turned into an RV. I had a hammock in there, and some champagne, and we would go in there to ‘rehearse’ between scenes. We all spent a lot of time in that breadtruck rehearsing.”

How hard did the cast party? New Order’s Bernard Sumner gave a hint in his memoir Chapter and Verse, explaining how the band discovered the drug that inspired their 1982 song “Ecstasy.” “We’d played a gig in Dallas, gone out to a club afterwards and got talking to the promoters. These were the days when Dallas was massive on the television and they told us that some members of the cast and crew would go to this club ‘where they liked to drop an E.'” To wit: New Order had to ask what an “E” was. In other words, the Ewings helped introduce English rock stars to Ecstasy – talk about a major contribution to music history (if a not-entirely-positive one). Before Ibiza, there was Southfork.

And long before IMDB existed, Dallas reruns worked as a map of the Old Weird Hollywood; with such a huge cast, even the tiniest one-scene roles could feature old-school character actors. That’s why you can connect any Hollywood movie to the series in just a few moves – Six Degrees of Southfork is too easy. Citizen Kane? Orson Welles was in The Lady from Shanghai with Rita Hayworth, who was The Fire Down Below with Robert Mitchum, who was in Blood on the Moon with Miss Ellie. Black Panther? Forest Whitaker starred in the 1991 erotic thriller Diary of a Hitman with Lois Chiles – who spent way too much of Season Five banging J.R. and chasing Bobby. Blade Runner is a twofer: the snake-dancing replicant Zhora is Joanna Cassidy, who played slinky oil baron Sally Bullock, while the genetic engineer who builds their eyes is James Hong, who stole the Season Four finale as the ambassador from a country called “Southeast Asia.”

Dallas kept rolling until 1991, signing off with a riff on It’s a Wonderful Life – J.R. looks back over his past with a devil (Joel Grey!) who shows him how much happier everyone would be if he’d never existed. The 2012 TNT revival was an uneasy mix of old and new, clogged up with a bunch of lackluster young Ewings. But it was a delight to see J.R., Sue Ellen, Cliff and Bobby up to their old tricks, chewing twice as much scenery as the rookies.

Right to the end, Larry Hagman remained one of TV’s grand characters. He died in 2012, six months to the day after I talked to him. He was one of the funniest people I’ve ever interviewed, punctuating every sentence with his Texas cackle. “At home I mostly listen to Forties music, on the Forties station,” he told me at the end. “A lot of times my mother, Mary Martin, will come up, singing something. Just last night I was just getting ready to go to that Dallas party at Warner Brothers, I had the Forties station on. And there she was, singing ‘Deep Purple’ or something like that. No, it was ‘I’m Gonna Wash That Man Right Out Of My Hair,’ from South Pacific. And I thought, this is a good omen.” R.I.P. Larry Hagman – and here’s to Dallas for helping to invent the TV world as we know it today.