Conan O'Brien Breaks Out of the Bubble - Rolling Stone
×
×

The Wichita State University mascot is an anthropomorphized stalk of wheat called the Wu-Shock. It has a choppy thatch of fried yellow hair, a sinister sideways smirk and weirdly bulbous cheekbones — and Conan O’Brien, looking at its picture, needs no more than five seconds to nail the thing’s unique grotesqueness: “It looks like John Tesh after he’s been dead for four days.” O’Brien is on the campus of a different college, University of California, Irvine, to tape a comedy segment that will run during the NCAA men’s basketball tournament. UCI’s mascot, which has Dwayne Johnson biceps and a bullhorn-shaped nose, is Peter the Anteater. The basic premise of O’Brien’s visit here is twofold: 1) Learn from Peter how to rally a team to victory, and 2) Make fun of Peter, and other bizarre college mascots, mercilessly.

“It’s a standard remote,” says O’Brien, referring to those pre-taped bits in which he gets off the soundstage and into the world. “I like to go into these pretty much blind — with a sort-of-idea that changes as we go.” He’s sitting in one of the school’s athletics buildings, getting his signature bang-swoop blow-dried to its full glory while hashing out a provisional plan of attack with two of his longtime writers, Dan Cronin and Todd Levin. “We like to keep it organic, but we do prep work to have some beats in mind, to steer it,” says Levin. O’Brien, consulting pictures of various mascots, comes across Xavier University’s furry, shapeless Blue Blob. He frowns. “This could be anything,” he says. “This could be Ebola!”

At 52, Conan O’Brien has been a late-night host for 22 years, with a storied comedy career that remained essentially unstained by showbiz drama until 2010, when NBC, spooked by wobbly ratings, yanked The Tonight Show away from him after mere months. Four and a half years into his current run hosting TBS’s Conan, however, what seemed then like an epochal setback has proved itself, slowly but unmistakably, as a rebirth. O’Brien regularly snatches the coveted 18-49 demographic from competitors. His average viewership (including video-on-demand and the TBS and Team Coco websites) has surged to 1.3 million, and his YouTube channel had nearly doubled its audience from just six months ago, with 92 million video views a month.

A big part of O’Brien’s resurgence is his outsize viral success, enjoyed with a regularity that has come to seem routine: One recent remote, in which he suffered through a punishing Korean spa treatment, naked, with The Walking Dead’s Steven Yeun, has tallied 9 million plays since its February broadcast. All the while, O’Brien’s taste for stoned-wiseasses-in-the-dorm absurdity remains undiminished. Just the other night, he built an entire bit around a wonderfully low-fi sight gag: A series of enormous cutout Robert Durst heads kept popping up around the set, the appearance of the millionaire alleged killer sending O’Brien and Andy Richter, his longtime sidekick, into frightened hysterics each time. “That felt good,” O’Brien says. “More of that. Let’s get crazy with it.” 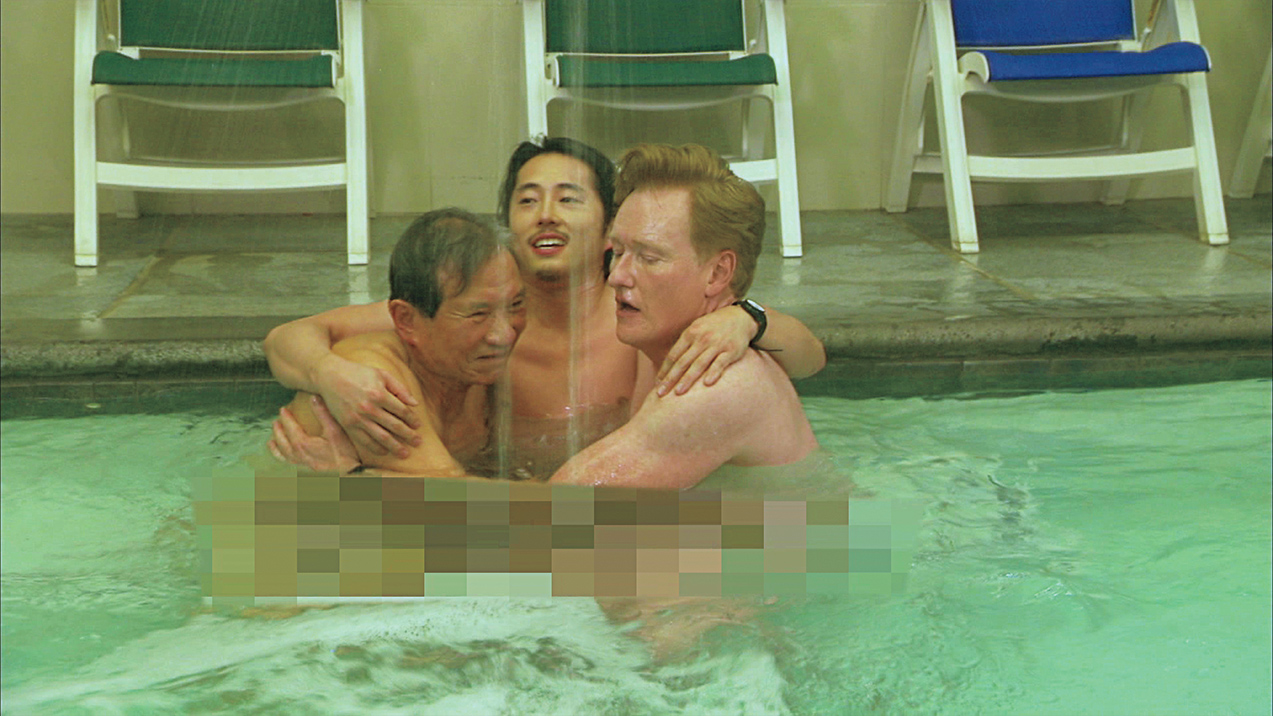 A field producer leads O’Brien to his first UCI interview, at a basketball court. O’Brien is wearing a tight T-shirt and jeans; on his wrist is a customized black Rolex Milgauss that his wife, Liza, got him for his 50th birthday, which reads Team Coco, in orange, on the dial. On the court, O’Brien introduces himself to Helen and Maria, two young representatives of the Anteaters’ marketing team. There is no director: O’Brien picks the shot, with input from his writers and cameramen. The cameras start rolling, and O’Brien’s demeanor turns drily antagonistic. He calls the anteater a “lowly beast,” and produces a Photoshopped mock-up of the mascot, this one intended to make Peter appear more fearsome: His arms have been replaced with a chain saw and a lobster claw. “Would you consider this?” O’Brien asks. Soon, Peter shows up. O’Brien challenges him to a pushup contest, then cackles with glee as the mascot’s snout keeps bumping into the floorboards.

When the cameras aren’t rolling, O’Brien points out that the combative pose he’s assumed for this segment is fairly uncommon. “As much as possible, I want the joke to be on me,” he says. “I like it when someone else is the alpha.” This was the guiding principle when O’Brien recently flew to Cuba, after President Obama announced intentions to normalize relations with that country, and produced a show from Havana — touring rum distilleries, learning to hand-roll cigars, taking rumba lessons. The broadcast drew criticism for pushing darker facts of the nation’s history to the side. On this point, O’Brien mixes contrition and defiance: “If you do a Cuba show, people will ask, rightfully, ‘What else could you have done?’ I get that, and my answer is, we started with that one show. Maybe there’s a way to go back and dig deeper. Go outside of Havana. But I didn’t feel it was the job of the introductory show to hold people’s feet to the fire.”

What unites the Havana trip, this Anteater bit and all the other remotes is O’Brien’s desire to inject unpredictability into a job that is by design repetitious, familiar and unchanging. “You go in waves,” he says. “In my twenties, I was really intense. But then you can start to settle into a groove. And that’s good, because it means ease, but if you stay in the groove too long, you’re in a rut. I think the Tonight Show fiasco had a lot of hidden blessings in it — it was like having a heart attack, having your heart restarted, having a near-death experience. It woke me up.” Remotes, he says, “keep me honest. They’re a pain in the ass. You’re getting in the van. They take me out of the bubble.”

O’Brien wraps the UC Irvine shoot, feeling good about what he’s got. He poses for pictures with students, then his assistant, Sona Movsesian, drives him in his Tesla to a tony Mediterranean restaurant in nearby Newport Beach. Heads follow O’Brien as he walks to a corner table. I order a dirty martini; he gets a little carafe of chardonnay. “His drink looks cooler than mine,” O’Brien tells the waitress when our beverages arrive. “He got a Don Draper drink. I got My Super Sweet 16.” She heads off, laughing. O’Brien says he always liked it, as a kid, when he met a comedian “and they were the person in real life that they were onscreen,” so he tries to live up to his own youthful expectations even when there aren’t cameras around. Or, for that matter, any members of the general public. “I was on a plane sitting next to Larry David recently — we both got invited to this Charlie Rose thing — and Larry started singing. I just go, ‘Larry, can you keep it down?’ And he’s like, ‘Oh, sorry.’ Then he starts singing again. And he goes, ‘Little loud?’ And I go, ‘Little loud.’ Suddenly, it’s an episode of his show, and I fall right in.”

Stories like this illustrate O’Brien’s robust playfulness. I wonder nonetheless, with the retirement announcements of his late-night colleagues David Letterman and Jon Stewart fresh in the news, if he ever hears his own clock ticking. O’Brien concedes that he does. “It’s been 22 years now, and I really just don’t know how much longer I’m going to do it for,” he says. “But as long as I do, I want it to be fun.” He emphasizes that the rigid trappings of the talk-show format remain more stimulating than stifling. “Constraint is good,” he says. “I’m a Buddy Holly fanatic; I play that stuff all the time, and I can’t believe how much you can move the world with just three chords. To break the form, you have to have the form: the desk, the microphone, Andy — the necktie!” He grins. “There’s nothing funnier than a man my age, in a suit, acting like a complete ass.” He polishes off his Super Sweet 16 wine, and orders another round.