2. Mad Men is my favorite show ever. I’ll miss it. The finale sucked, yet that’s nothing to get exercised about — that’s what finales do. Series finales always suck, and everyone knows it, but TV shows still feel obliged to keep attempting them. The idea that a show needs a finale is just one of those daffy ideas America took to heart in the 2000s, like MySpace, the Zune, the Audrina/Justin Bobby romance or the concept of Paula Abdul judging a singing contest. It was a confused time.

3. If you enjoyed the Mad Men finale, please keep enjoying it — I have no desire to change your mind. It was clever (what finale isn’t clever?) and it was heart-tugging (what finale isn’t heart-tugging?) even as it left hugging-and-learning stains all over the screen, forcing phony resolutions (oh, so Joan has really respected Peggy all these years? “How fascinating,” as the 1960 Joan would have said) and contrived fan-service bonding. It looked far more like a 2020 Mad Men Reunion Special than an actual episode.

4. The last scene was definitely clever: Don Draper gets his mystic crystal revelation, in the shape of a sales opportunity. He does his sun salutation by the sea and you see the lightbulb go off over his head; he gets an idea for the Coke ad. A smile flickers on his lips, and he knows it’s time to chant what will always be his mantra: Back to work. 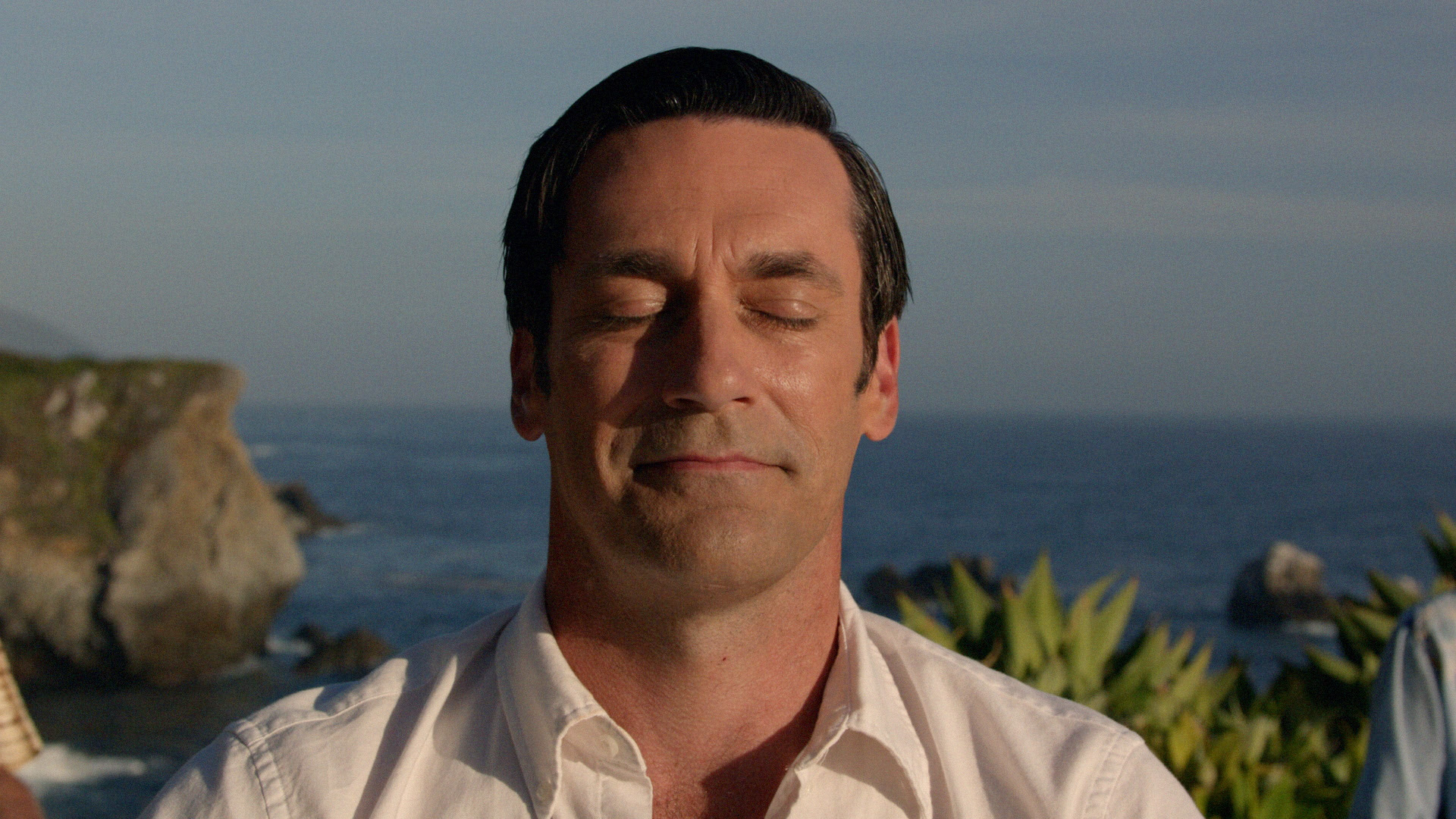 When the guy from the Metaphor Mountain encounter group gives his sad (and boring) (and ineptly staged) speech, Don gives him a weepy hug and instantly smells a pitch. But that doesn’t mean his Amanda Huggenkiss tears aren’t sincere. For Don, that’s what sincerity is. His desire to turn this hippie-dippie scene into a Coke ad isn’t a cynical betrayal; it’s him translating this scene into his own language, a language that will someday give the world the eighth-best song on the first Oasis album.

What did you think — Don was going to change? Learn something? Start over? Henry Francis called it right and exact, a few years ago: “There’s no fresh start, Betty. Lives go on.” While Don does yoga, a spiritual practice I learned about from a Tic Tac ad, his Third Eye is scheming his next move. So what if he never gives his cosmic thanks to Mother Sun? That’s what the ommm is for.

5. Why did this episode end in November 1970, when pushing it back just one month would have allowed it to end with one of the most Don songs ever to hit Number One: Smokey Robinson’s “Tears of a Clown,” which topped the charts on December 12? “Smiling in the public eye, but in my lonely room I cry, the tears of a clown. When there’s no one around.”

6. Golden Age prestige dramas tend to have high-profile, publicity-blitz finales. But they usually wrap up the story in the third-to-last episode, then stick around for a two-episode encore that’s basically just schtick. The Sopranos really ended with “Kennedy and Heidi,” just as Breaking Bad ended with “Ozymandias,” but they both tacked on a couple bonus hours of shoot-’em-up hijinks. Clever finales, sure, but cheating in terms of the stories’ moral/emotional stakes: Breaking Bad wasn’t about a man fighting neo-Nazis any more than The Sopranos was about a cozy family munching onion rings. And truth be told, the criminally underrated 1983 Richard Gere masterpiece Breathless did the Sopranos ending better, except with Jerry Lee Lewis instead of Journey and way more hair.

Mad Men could have ended at the third-to-last chapter — “Space Oddity” plays on the car radio, Don picks up the hitchiker and rolls into the desert. The second-to-last episode would have made an even stronger ending — it was one of the show’s most passionate and perfect hours. Really, the story ended last week with Don at the desert bus stop, a Buddy Holly lullaby in his head.

But no, Mad Men apparently needed an official finale episode full of sodden shtick. Poor Stan and Peggy — they deserved a moment that didn’t feel like a cynical series-finale gimmick. I did love Roger and Marie Calvet cuddling in the café, two cads who could only be happy together. I liked Joan’s new home office, set up just like the hotel-room office at the end of “Shut The Door, Have A Seat.” (Hope the Holloway Harris production company tracks down a long-lost commercial director named Sal Romano, last spotted on the Baltimore club circuit with his smash Ann-Margret tribute act, Mark Your Man!) I also enjoyed Peggy’s question to Don: “Don’t you want to work on Coke?” I suspect that over the next decade, Don and Peggy will do most of their work on coke.

Finales by definition are all about cheap dramatic payoffs and tidy resolutions. Mad Men never really fucked with those. So it’s no surprise the finale was one of the show’s least Mad Men-like episodes ever.

7. Logically, the finale should have centered on Sally and Don — the bond at the heart of the drama — but she was a bit player last night, and it’s not hard to suspect why: Matthew Weiner respects David Chase too much to rub failure in his face. After a Sopranos finale sandbagged by risible A.J. and Meadow scenes, Weiner didn’t want to embarrass his mentor by playing the “Ha ha, we found a real child actress” card. Good for him but bad for the show, since making Sally spend her last speaking scene with non-characters Bobby and Baby Gene (who at least spoke his first line) was like making the Beatles spend their final recording session playing a piece of crap like “I Me Mine.” 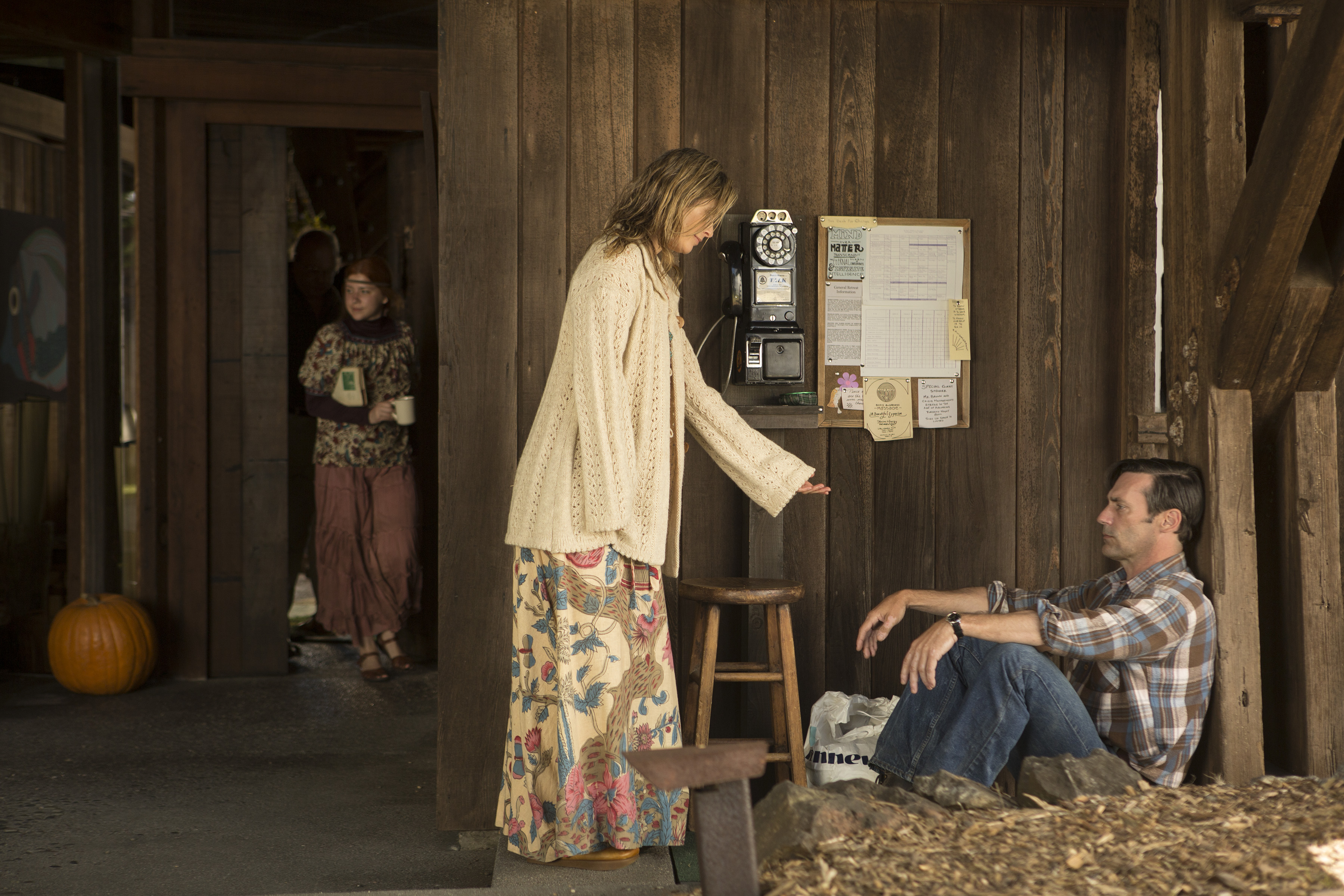 9. So it wasn’t a good Mad Men episode. So what? Resist the tyranny of Finale Culture. Any kind of big climax would have been phony for Don Draper and co., because this show distrusted big climaxes (or maybe just wasn’t good at them). It always took the long road story-wise, doing everything the hard way. I mean, it was an adult drama that wasn’t about lawyers, wasn’t about doctors, wasn’t about cops and robbers. That was enough to make it shocking in 2007. Or now.

So it couldn’t coast on the cliches those kinds of dramas always coast on. Even the loftiest Golden Age cops-and-robbers shows — The Sopranos, Breaking Bad, The Wire — could throw in a shoot-out or chase scene or train heist to pad an episode. Mad Men never kept that crutch around. The only prominent gun was that rifle Pete never got around to firing. (Suck it, Chekhov!) If you hear shots, you’re in a Korean War flashback or a Kenny hunting trip. (Although Joan’s son owes his life to a gun, and Megan once gave Don a copy of Revolver.) Instead, the series was obsessed with selling things, which made it strangely akin to old-school Eighties soaps like Dallas or Dynasty. (And in recent years, Christina Hendricks’ acting has gotten uncannily similar to Victoria Principal’s, especially when she gets mad and yells — it’s like she studied at the Pam Ewing Drama Academy, which needless is fine with me.)

Mad Men hit its historic peak with Seasons 3 and 4, along with the first half of Season 5. At that point, it took some bold gambles that didn’t pay off at all (the “Megan wants to be an actress” subplot, the silly merger, the bumbled Lane exit, etc.), so the last seasons aren’t nearly as strong. The 2015 mini-season was a mess, with some truly disastrous gaffes (the returns of Loboto-Megan and Mutton Chop Glen) — I suspected we were still in the middle of Roger Sterling’s acid trip and the recent episodes were just a hallucination. Until those last two powerhouse episodes, which can hold their own with any the show has done.

In a way, a lousy finale is proof of Mad Men’s narrative integrity — or maybe that’s just a lovesick fan talking. But as I said, this is my favorite show ever. I’ll miss it. I’ll be sitting in front of my TV on Sunday nights like Don Draper sitting at that desert bus stop, watching the horizon to see if his Cadillac is coming back — you know that motel con-man kid didn’t get far in that car before some fast-talking girl took off with it. Maybe she’ll drive it back this way. Maybe Don will hop a ride with her. Everyday, it’s-a getting closer, going faster than a roller coaster.

That bus stop scene: just one of the literally hundreds of astounding moments I will always remember from Mad Men. There will be no more of them.