'Cloak and Dagger': What You Need to Know About Marvel/Freeform Superheroes - Rolling Stone
×
×

Two teenagers – one poor and one rich, one black and one white, one boy and one girl, one powered by darkness and the other by light – become one unstoppable crimefighting duo. That’s the basic brief on Cloak and Dagger, the young heroes set to be the next stars of the Marvel Cinematic Universe’s TV empire.

Cloak and Dagger hits Freeform on June 7th, marking the network’s first foray into the MCU. Helmed by showrunner Joe Pokaski (a superhero veteran with credits on Heroes and Daredevil), Cloak and Dagger stars The Night Of’s Aubrey Joseph and Disney star Olivia Holt as Tyrone Johnson and Tandy Bowen. Drawn together by forces beyond their control and some real romantic heat, the pair begin a fight for the soul of New Orleans. And if they help establish a foothold for Marvel outside of Netflix – a realm in which their track record has been decidedly mixed (Marvel’s Inhumans, anyone?) – so much the better.

'Runaways': Why Marvel's YA-Superhero Show Could Be a Gamechanger

Unfamiliar with these star-crossed superheroes? Don’t get left in the dark. A glance at our guide to the heroes’ history will prepare you for the battle to come:

They’ve got a unique origin story
It began with Spider-Man. Cloak and Dagger debuted in 1982, in issue #64 of the Spidey spin-off series Peter Parker, the Spectacular Spider-Man. Co-created by writer Bill Mantlo (one of the minds behind Guardians of the Galaxy‘s Rocket Raccoon) and artist Ed Hannigan, these crazy kids got a very of-the-moment origin story.

Cloak is 17-year-old Tyrone Johnson, who fled Boston after police killed his friend; Dagger is 15-year-old Tandy Bowen, daughter of a neglectful jet-setting supermodel. Both runaways, the two become friends over a foiled mugging, but get turned into test subjects for an experimental drug overseen by the organized crime boss Silvermane, head of the “Maggia” (Marvel’s wary workaround for the Mafia).

Not only do Ty and Tandy survive while all the other teenage guinea pigs perish, they gain incredible powers, which they quickly use to track down and terminate the people responsible. Tandy can form and and wield deadly daggers made of light, while Ty becomes a portal to the Darkforce Dimension, a shadowy nether realm he can use to teleport, hide, or imprison opponents to drive them insane. The darkness inside him also produces an insatiable hunger that only proximity to Dagger’s light can satisfy – though that superpowered connection is as close to intimacy as this platonic pair has ever gotten.

They were made for the mean streets
It might have been “Morning in America” for Ronald Reagan, but the streets of the Marvel Universe circa Cloak and Dagger’s creation were darker than ever. C&D were firmly in the lineage of 1970s antiheroes like the Punisher and Ghost Rider, street-level (and cross-racial) heroes like Luke Cage and Iron Fist and the noir experiments of Frank Miller, the future Dark Knight Returns/Sin City/300 legend who was then making his reputation with Daredevil, Elektra et al.

True to form, this new duo weren’t afraid to kill their enemies, separating them from superhero traditionalists like Spider-Man. Moreover, the drug angle to their origin spurred them to target dealers and organized crime rather than costumed baddies, putting them more in line with Frank Castle than Tony Stark. 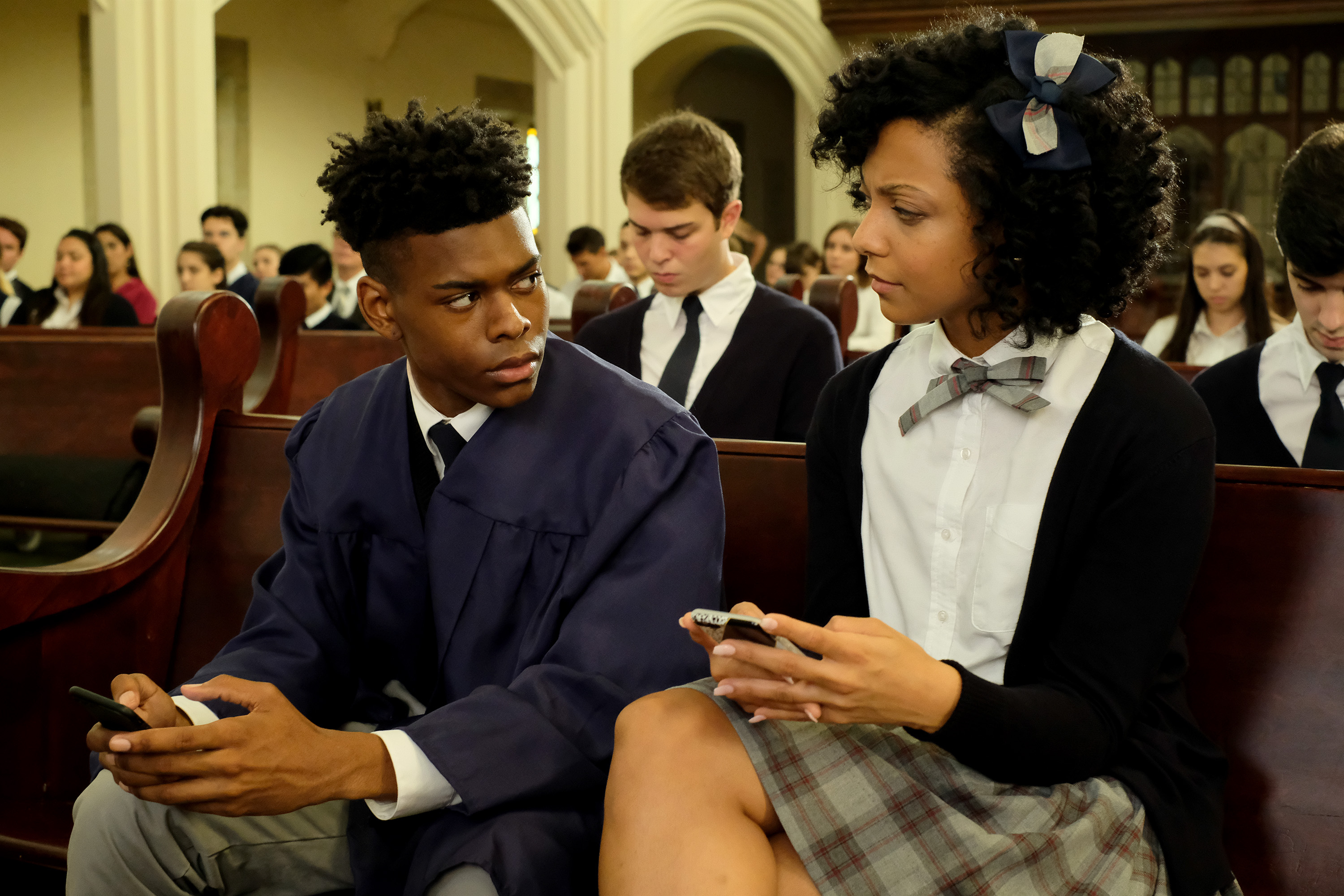 Their look made them last
Mantlo’s versatile writing and Hannigan’s expressive art helped these au courant characters make a strong first impression. The two collaborated on the pair’s design in particular, and the results speak for themselves: The swirling void of Ty’s dark cloak, the daring dagger-shaped décolletage of Tandy’s bodysuit. Not to mention that the color contrast between the characters’ costumes are a bit like if the black-and-white outfits that artist John Romita Sr. designed for fearsome figures like the Punisher or Bullseye had been split into two people. The look also anticipated artist Mike Zeck’s design for Spider-Man’s black costume and its eventual incarnation as Venom a few years later.

C&D earned their own mini-series in 1983 and an ongoing comic two years later, both illustrated by Rick Leonardi. But despite, or perhaps because of, their combination of two of the era’s biggest trends – teen teams and “good guys” who aren’t afraid to get their hands dirty – they never wound up hitting the heights of other anti-heroes. Still, the strength of the design, and the mixed-up-kids-bound-by-fate concept, kept them from fading from the spotlight completely.

Sadly, both Mantlo and Hannigan have suffered debilitating health crises: Mantlo was permanently incapacitated after being struck by a hit-and-run driver in 1992, while Hannigan suffers from multiple sclerosis. Despite the strength of their creation, the financial struggles endemic in the dog-eat-dog comics industry have made them causes célèbres for fans and charities alike.

They’ve got crossover appeal
While never superstars in their own right, Cloak and Dagger have played roles in storylines that became blockbuster Marvel movies. In Infinity Gauntlet, the basis of this year’s Avengers: Infinity War, Thanos’ annihilation of half the living beings in the universe kills Dagger. Cloak joins the last-ditch effort of the surviving superheroes to stop the Mad Titan and succeeds in swallowing him up into the Darkforce Dimension, but not for long: The Gauntlet’s power enables Thanos to escape, tearing Cloak into tatters in the process. (Spoiler alert: He recovers.)

Cloak’s powers of concealment and teleportation, meanwhile, have made him a frequent favorite of writers who need an quick-and-dirty way to transport their characters from place to place. The comics version of the Civil War conflict between Captain America and Iron Man, for example, employed Tyrone as nothing much more than the Cap squad’s glorified Uber driver.

And both in their own series and as special guests in others, C&D – a rare unaffiliated crimefighting duo in the Marvel Universe – have often gotten tangled up with other teams. Early stories suggested Tyrone and Tandy were mutants whose powers were merely activated by Silvermane’s drugs, not bestowed by them, leading to frequent alliances with the X-Men and related groups. That angle has since been dropped, but the pair joined the team officially for a brief period a few years back. And as befits their status as Marvel’s O.G. street kids, they’ve crossed paths with the troubled teen team the Runaways, whose live-action adventures recently aired to critical acclaim on Hulu.

They’ve moved from New York to New Orleans
The comic-book versions of Cloak and Dagger have traditionally been based in New York City, the home of many of the Marvel Universe’s superheroes – not to mention its executives, editors, writers and artists. The TV show, however, transports the pair from the Big Apple to the Big Easy. It’s a chance to add New Orleans’ distinctive local color, as well play on the theme of disaster capitalism in the post-Katrina city. (This last bit brings it in line with NYC-based Marvel shows like Daredevil and Luke Cage, which have displayed a surprising willingness to align supervillains with economic exploitation.) On a more practical level, it will give Tyrone and Tandy a chance to shine far from the shadows of the Avengers’ Stark Tower, Daredevil’s Hell’s Kitchen and Luke Cage’s Harlem, making it easier for the show to dance between the continuity raindrops.

Change you can believe in?
The setting isn’t the only thing shifting as Cloak and Dagger make the jump from page to screen. Jettisoning the drug-experimentation origin story, the show links Tandy and Tyrone through a shared, shadowy childhood tragedy before they meet up as teenagers years later. The show’s trailer alludes to a more mystical explanation for their dark and light powers – a “divine pairing” that has saved New Orleans from disaster time and time again.

Most importantly, the show is set to play up a major romance angle between Joseph’s Tyrone and Holt’s Tandy. This change could unlock the energy the characters have needed to become big-time icons all along.