You gals will just come and grab onto her, right? OK, Malin, now give me your best man pose!” Malin Akerman – blonde, Swedish, not a dude – starts grabbing her crotch and throwing up devil horns, tongue out. The choreographer standing just offstage is ecstatic: “Yes! Yes! Exactly that! And then high-five the dancers’ booties!” Akerman asks their permission, but it’s a moot point: The women are already bent over their chairs, awaiting her smacks. At the moment, she’s rehearsing to sing “Talk Dirty” – which is to say, she’s pretending to sing Jason Derulo’s ode to lipstick marks on his passport and ménage à three-o’s. Everyone’s spread way too far across the stage, and the lights are getting hot, and the dancers are lining up for spankings but the song is moving too fast for her to reach them all. Plus, her running-man dance isn’t landing. Someone twerks a few feet away; impressed, the actress asks, “How do you do that?” Rehearsal ends. She’s told to “make sure to have fun out there,” as if suiting up for Little League.

Spike TV’s Lip Sync Battle, premiering April 2nd, pits two celebrities – say, John Legend and Common, or Jimmy Fallon and Dwayne “The Rock” Johnson, or Anna Kendrick and John Krasinski – against one another in a competition that’s part rock concert, part summer camp and all overenthusiastic pretend-crooning. Skill and talent have no place here; this isn’t MasterChef Junior. Rather, through the course of two rounds, celebrities have to sell old and new pop hits with whatever they’ve got aside from a voice, be it dance moves, costumes or – in Kendrick’s case – a surprise appearance from a sparkly Jennifer Lopez, who walks out onto a smoke-filled to help perform “Booty.” Audience applause determines the winner of a championship belt, gold and heavy like the WWE’s. Host LL Cool J sums it up in the show’s trailer: “Two stars perform two songs, each trying to out-sync and out-psyche their opponent. You go hard or you go home.”

Though the series is new, the concept is a proven commodity: Originally thought up on a whim by Krasinski, his wife Emily Blunt and British Office co-creator Stephen Merchant while road-tripping, the lip-sync game quickly found a home on their friend Jimmy Fallon’s talk shows, starting in 2013. Its most popular clip – Emma Stone mouth-engineering Blues Traveler’s “Runaround” and both T-Pain’s and Ludacris’ parts from DJ Khaled’s “All I Do is Win” – has racked up 47 million views on YouTube. (The others aren’t far behind; each entry has been streamed more than 25 million times.) Late last year, Spike TV bought the idea for an expanded primetime show after NBC passed. Casey Patterson, a Viacom development executive involved, tells the New York Times, “It was not a complicated conversation.”

There’s a real sense of competition on-set, though the stakes couldn’t possibly be lower. “Malin doesn’t know what she’s dealing with,” says Merchant, trash-talking backstage. “I’ve done it before: I’m one of the originators of the concept! You’re dealing with a master.” And, on top of that, he’s a producer: “The fight isn’t fixed – but I can spend more money on my numbers than on anyone else’s. So when Malin says, ‘Oh, I want this, I want this’, I just say, it’s not in the budget. And then I spend her money putting dancers in a cage.” (He’s having a laugh but, when performing Christina Aguilera’s “Dirrty,” that’s exactly what’s on stage with him.)

In reality, the playing field is far more even than he lets on: Neither contestant knows what the other has prepared, in any form or fashion. He hasn’t seen what she’s readied for “Pour Some Sugar on Me”; she hasn’t seen him grinding in ass-less chaps and a baby tee, Aguilera-style. “We see it when you do,” Merchant says about the performances. “I think it just adds something, where you’re as genuinely surprised as the audience.” Same goes for the show’s host: “I…did not know Stephen was going to wear that,” a dazed LL admits. 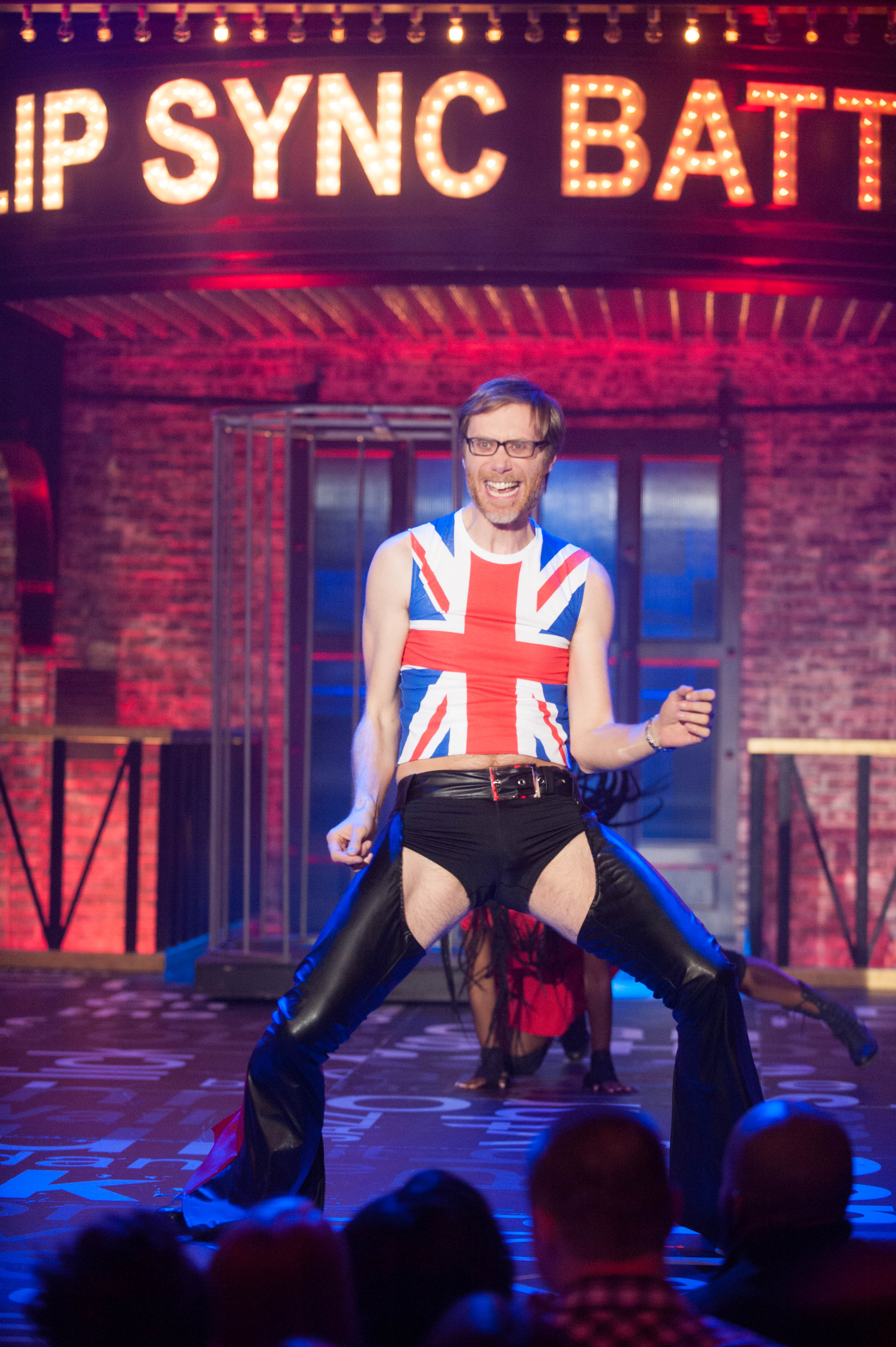 “It’s funny, because the lip sync I did with Joe Gordon-Levitt on Jimmy’s show,” Merchant adds, referring to his passionate interpretations of DJ Jazzy Jeff & the Fresh Prince’s “Boom! Shake the Room” and Beyoncé‘s “Single Ladies” that kicked off the phenomenon on The Tonight Show. “I mean, they tell you this idea, and…you don’t think about it on the plane. And then it comes time to do it and suddenly – within a week – there’s like five million views on YouTube!” Meanwhile, model Chrissy Teigen – co-host and on-set “bartender” – comes over and asks if he’s “proud of his winning performance.” (He had been wearing a codpiece under the chaps, which she grabbed up and put in her bra.) She kisses him on the cheek goodbye, and Merchant continues right where he had left off: “And it’s funny, it’s like: All the effort you could put into a scripted comedy show, and something silly and light like this…it’s just really weird, you never know.”

Akerman doesn’t end up touching nearly as many butts as the choreographer planned, though she does grab on to Merchant’s. He returns the favor when he literally pours (or rather, jerks) sugar onto her chest. The on-set chemistry genuinely feels like a bunch of buddies just hanging out, which isn’t a surprise: Merchant and Akerman have mutual producer friends in common, and he had LL on his radio show years ago, where the actor recited “Mama Said Knock You Out” at the rapper. “We play up the rivalries, but everyone loves everyone,” Merchant says. “I hope it’s a silly, fun, entertaining bit of TV.” It’s a phrase he repeats several times backstage when describing the show, as if to make absolutely clear: We’re not talking prestige TV here, people. We. Are. Having. Fun. Earlier, having seen the spindly Merchant writhe across the floor to Enrique Iglesias’ “Hero,” LL asks Malin, “Was that not fantastic?” She responds, “You’re right, that was not fantastic.” The cameras cut off for a commercial. Malin leans over to her opponent: “My eyes were watering, I was laughing so hard.”