For Carly Rae Jepsen, career moves are all about trusting one’s instincts. In 2012, when her brain freeze-inducing single “Call Me Maybe” slingshotted her to the top of the charts, the Canadian pop star rush-released her breakthrough sophomore album Kiss, heading on her international “Summer Kiss” tour the following year and wrapping in the fall. As the hectic promotional cycle for Kiss finished, Jepsen took a hard left. While others might head back to the studio, Jepsen satisfied her musical theater sweet tooth by assuming the title role in Broadway’s Cinderella, in which she starred alongside Fran Drescher for three months in 2014.

“I found the freedom lately with my career to make choices based on what I’m attracted to and what excites me,” says the 30-year-old singer. It’s evident on Emotion, her critically adored third full-length, which released in August 2015. Jepsen diverged from the sugary shellac of Kiss for the set, a collection of fluorescent Eighties-indebted earworms with liner notes that include Dev Hynes and Rostam Batmanglij as collaborators. Her experimental proclivity may have been met with a fraction of Kiss‘ success, but that didn’t deter her from chasing her artistic aspirations, both in and out of the music industry.

Following a short year-end tour for Emotion, Jepsen took yet another detour, this time by gearing up to play Frenchy in Grease: Live (airing this Sunday on Fox). While in rehearsals with a star-studded cast — including Julianne Hough as Sandy, Vanessa Hudgens as Rizzo and Aaron Tveit as Danny — she’s multitasking with preparation for her North American “Gimmie Love” tour, which resumes February 12th in Raleigh, North Carolina, and slotted in time to record the theme song for the Netflix series Fuller House, premiering February 26th. Jepsen explains that music will always be her end-all, of course, but don’t expect her to play by anyone’s rules.

Emotion was one of the most critically lauded pop albums of last year. Were you expecting that?
No. In my wildest dreams, I did not expect that. But it means so much to me. I think that when you work that hard on something that you’re that passionate about, it’s incredible to have people receive it well and appreciate it.

There’s a lot of emphasis that people place on sales. Did the numbers live up to your expectations?
I don’t pay too much attention to that. It’s never been my focus. It’s something I’d be doing if I hadn’t been paid to do it. Getting paid is sort of a bonus. I think getting to make a living in music is such a gift in itself that I’m not too worried about anything other than appreciating that.

You’re in L.A. rehearsing for Grease: Live! Are you nervous for the big day?
I am, yeah. It’s pretty scary to take on something new like this, and I think new not in just the way it’s new for me, but this combination of live theater with moving sets and so many cameras and different elements is kind of new for all of us involved. So it’s thrilling to be a part of something like that, it’s always exciting to be the first to try something, but definitely nerve-wracking too, the stakes are pretty high. 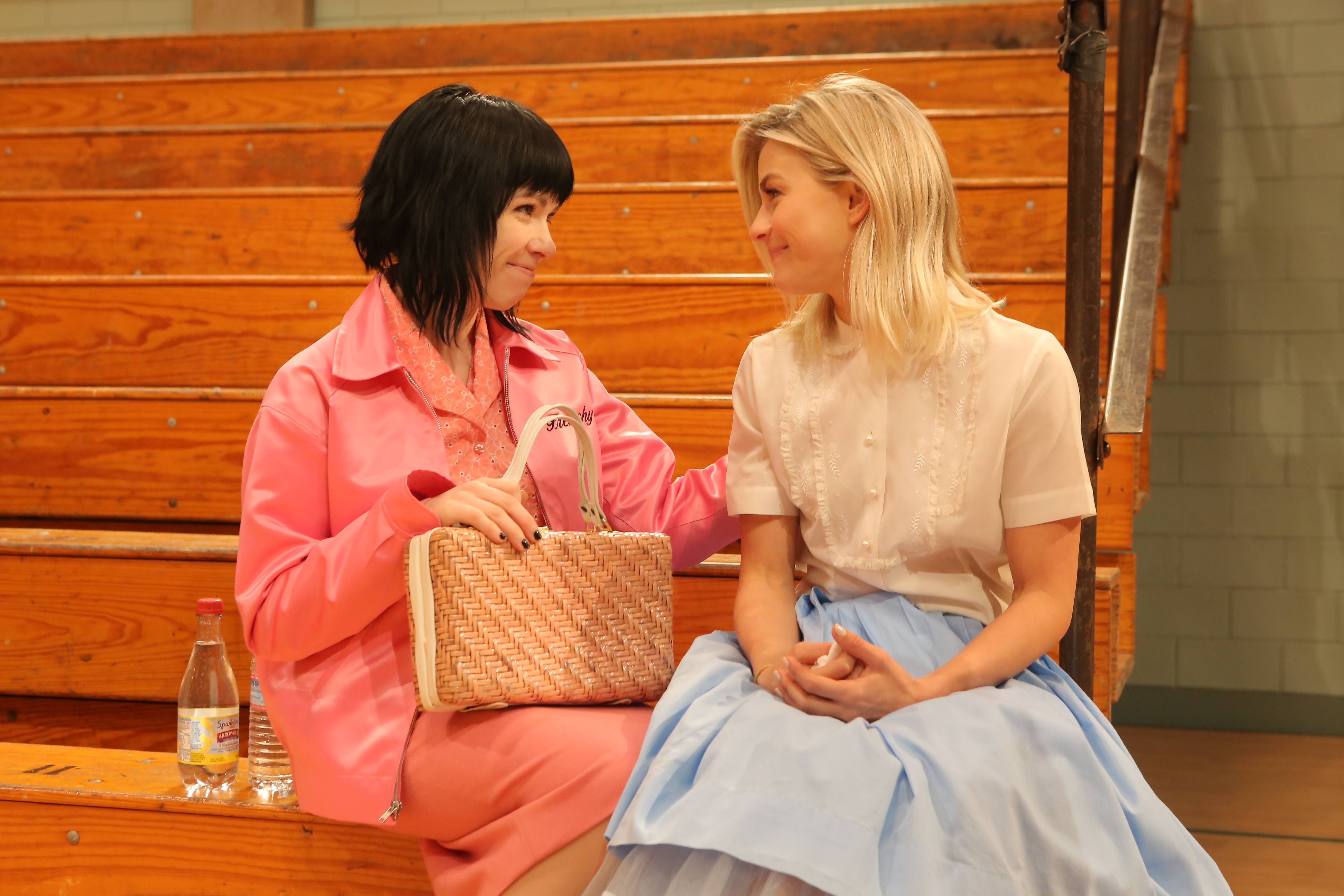 Fans were surprised after Kiss came out and you ended its tour that you put your music career on hold to do Cinderella on Broadway. Now, it’s almost as if you’re doing the same sort of thing with Grease: Live.
A lot of people who don’t know me would find it shocking that I would take on something like Cinderella, because they know me as a pop artist and pop writer. But for my friends and those who were around me as a kid and saw me study it in college and all of that, it was no shock that I wanted to explore that passion as well. I think a lot of the decisions you weigh in life, you say, “Does this make sense? Does it work for the schedule?” And I think there are some decisions you make with your gut, it’s a yes-or-no answer right away, and for me, being offered the role of Frenchy, or at least being offered to audition for the role of Frenchy, I knew that if I got it, it was going to be an immediate yes, because I wanted to do it so badly.

Were you a fan of Grease growing up?
I was. I have a family who’s very passionate about music, and musical theater is included in that. I was raised on all the classics, Grease included. Then in high school, we put on a few different productions. I got to play Sandy in Grease. I have a lot of childhood memories about that musical and what it means to put on that production. But this is a whole different level, I can’t really compare this to my community theater experience.

If you played Sandy then, how come you went for Frenchy this time?
It’s kind of exciting for me to play something a little bit less vanilla. I think with Cinderella, she was such a good girl and Sandy is that classic good girl gone bad, but I’m excited to have Frenchy. She’s very optimistic, she’s looking for all of her friends to be friends but she’s got that bad pink lady side too, and she’s also kind of just that happy-go-lucky thing that I find very relatable and adorable and I’m having a lot of fun with her. 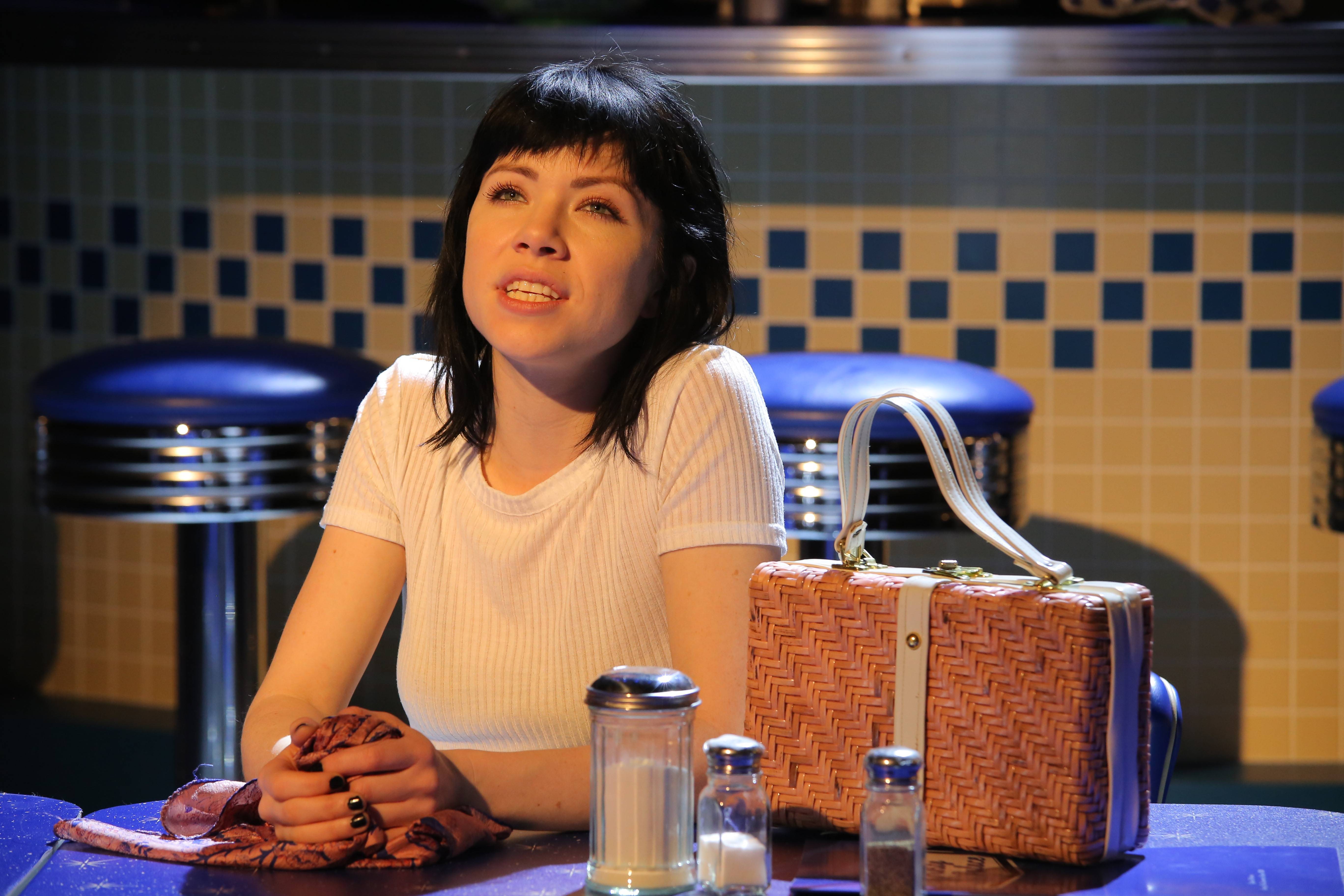 Would you consider yourself a theater junkie?
I have many passions. Number one for me will always be songwriting. I also really love theater, too. I went to a performing arts college where that’s all we studied. Stage acting and accents and all of the above, at the Canadian College of Performing Arts. For the longest time that I was there, I thought, that’s what I want to do, to do a life in theater and in the arts. But it was the same year I was introduced to the guitar. I took a left turn because I fell very much in love with songwriting at the same time.

How have rehearsals been?
It’s been nice. It’s been the first month and a half in the longest time I can remember that I slept in the same bed every night. It’s a new world. I feel like I’m annoying my boyfriend [David Kalani Larkins] and my friends with spontaneous outbursts. I’m like, “I feel so not tired!” They’re like, “Great, good for you.” I feel like I have a life! We went to the movies three times in one week, and I kept turning to my friends like, “This is so fun!” I’m so in love with the touring life, but getting a month-and-a-half to finally sink into a routine, even though, no joke, it’s still crazy rehearsals, just the familiarity of the same bed and getting groceries, it’s so lovely.

What else do you like to do around L.A.?
My boyfriend’s the one who’s really into movies, so that’s why we did that. We saw Room, Brooklyn and The Revenant, all incredible, and other things I love to do? I’d be lying to tell you I have a lot of time other than those three movies I went to see [laughs]. I wish I had a better story for you. The truth of this career choice is you have to love it, regardless of sales, regardless of spare time, because it might be the thing you do all day, every day, for a while. I’ve been able to look at it as a passion as well as a career, so I don’t feel the imbalance of me time. There’ll be every once in a while where I’m like, “Oh god, I want to go home and have a bath and chill.” And I’ll do something to check me out of this, whether it’s a book or listening to music that’s completely different. The other night, I was really craving to hear some jazz, and I went to a little jazz club. I’ll do things like that when I really need it, but in general, I feel happy being busy and having a project to work on. I think I’d be quite lost without a project.

You’re gearing up for your “Gimmie Love” tour as you’re in rehearsals. How are you balancing that?
I really like to switch it up because it rejuvenates me in my own career, too. It makes me feel like I’ve had enough of a break from it that I’m just dying to get back, and I can’t wait to be spontaneous again with the show and all the things I love about it. I enjoy both worlds but I enjoy getting to change between them. The one gift about the timing of this was also that we did get to do a little baby tour before starting Grease. I feel like we’d gotten a lot of problems worked out and pure exhilaration from feeling big new crowds getting to come and see who I was, and it sort of changed our thinking for the kind of show we want to put on.

At the end of the year, there was a Pitchfork readers’ poll in which Emotion was voted the Number One most underrated album. Do you think it’s underrated?
[Laughs] I remember being told that and not sure how to take it. I ended up laughing, but I’m taking it as a huge compliment. I think it’s just one of those things where it’s people wanting to give attention to something versus feeling like something got too much attention. I think I’m much more comfortable with that.

Once the tour comes to an end, are you already thinking about what’s next?
I don’t totally know. I’ll probably start writing. I already kind of have, actually, but I’ll want to do it more seriously, where I take time off and meet up with my favorite people and share some of the ideas I’ve been collecting and get to work. I don’t know if I’m giving myself any timeline and no one’s putting pressure on me, for once, but I do know I have enough ideas from the 200 that didn’t make this album that I want to rework and play with. I’m going to want to share more music sooner rather than later.

So there won’t be three years between records.
I shouldn’t put that in print, because watch, I’ll wait eight years just to be rebellious.