Seth Rogen will tell you that, occasionally, there are downsides to being one of the world’s best-known comedians. For example, no one will take you seriously when you ask to throw someone out of a plane at 10,000 feet. “So we’re filming this crazy fight scene,” the 34-year-old actor says about a key sequence in his upcoming TV show Preacher. (Actually, crazy doesn’t quite cover it: The set piece involves, per Rogen, a dust-up between an Irish vampire and “five, maybe six other guys,” flying axes, broken bottles, and fire, all within an enclosed space inside a chartered jet.) “I mean, it’s hard enough just trying to keep these things from turning into a clusterfuck of punches and kicks. But I thought we needed something to match the crazy, careless vibe of this character in the middle of it — so my producing partner Evan [Goldberg] and I said, we want to actually throw a guy out of the plane.

“Everyone thought we were joking,” he continues until, three days later, we asked, ‘So how’s it going with the whole throwing-a-dude-out-of-a-plane thing, folks?’ The crew went, wait, you were serious?!” In the end, they got what they wanted, and the highlight of their AMC show’s pilot climaxes with a skydiver recklessly chucking himself into the void. “At that point, people realized that yes, we’re dead fucking serious here,” Rogen declares, letting loose of one of his signature ah-huh-huh-huh laughs.

Take one look at the duo’s small-screen adaptation of Garth Ennis and Steve Dillon’s mid-Nineties cult comic (premiering on May 22nd), and you realize that the guys best known for raunchcoms like Superbad and This Is the End aren’t playing around. The story of a Texas man of the cloth named Jesse (Dominic Cooper) blessed with supernatural powers and battling redneck bullies and personal demons, Preacher blends gory horror, Lone-Star noir and go-for-broke action, with a mysterious cosmic entity thrown in for good measure. Along for the ride are two enigmatic government agents, the aforementioned Gallic bloodsucker (Joseph Gilgun) and Jesse’s good-with-a-gun ex-girlfriend (Agents of S.H.I.E.L.D.‘s Ruth Negga), who’s introduced trading blows and bullets in the back of a runaway car. It’s the last thing you’d expect from guys who made their name joking about the joys of pot-smoking and jerking off. 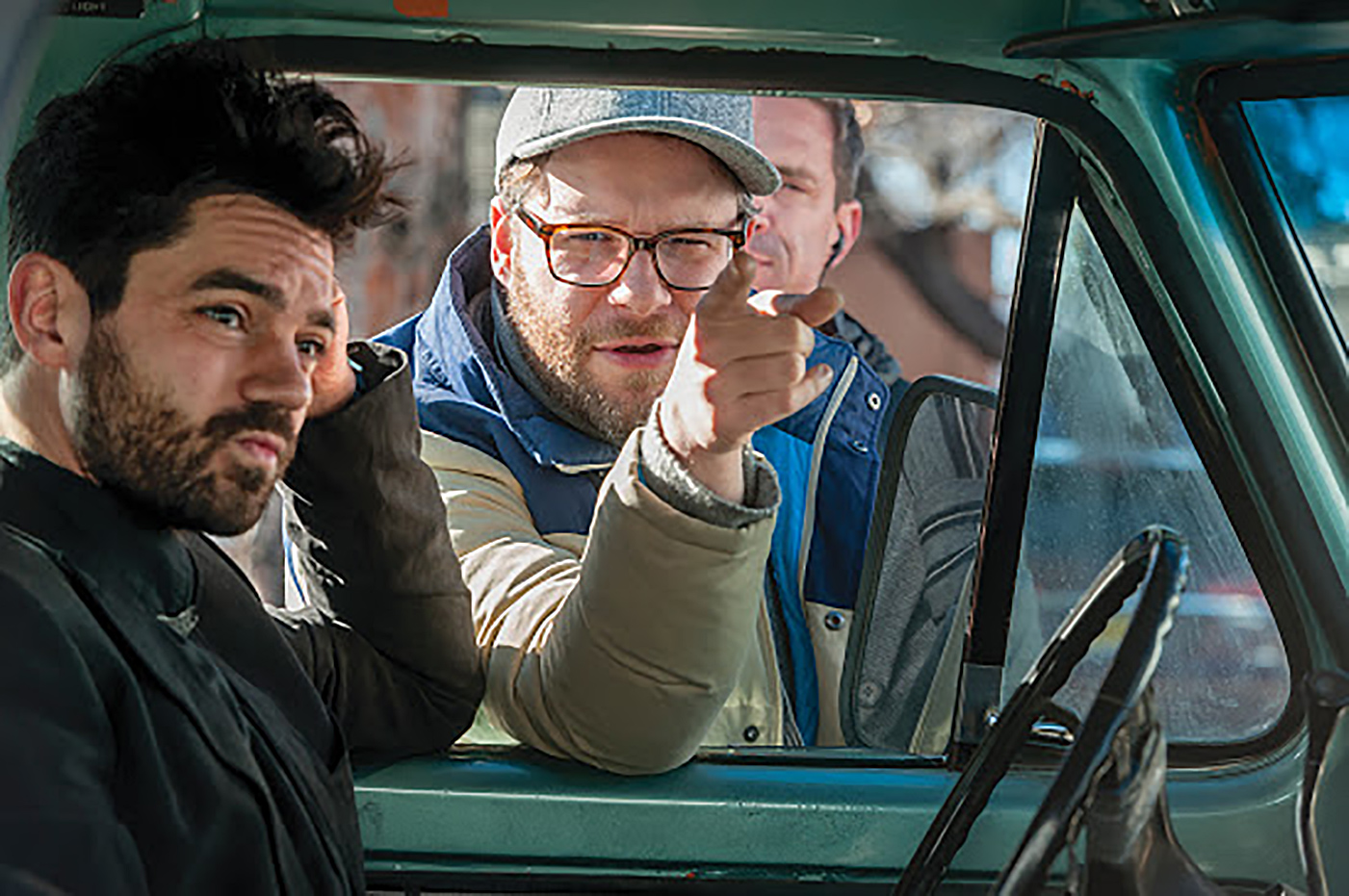 It’s also a decade-long labor of love for the childhood friends, both of whom first discovered the comics while still in high school. “We’d always wanted to make a movie or TV show out of the material,” Rogen says, “so after Superbad, we’d always sell ourselves as the ones who’d do it justice.” The duo’s pitches went nowhere until, after a few years of false starts, Rogen and Goldberg got Breaking Bad producer Sam Caitlin to help them develop it into a series — and suddenly, they found themselves directing a scene in which a chainsaw with a disembodied arm attached to it skitters toward Cooper across a church floor. “That was pretty much my greatest moment on a set ever,” Rogen says.

Cooper, who’d dived into the comics after the duo gave him a detailed 40-minute pitch (“We took a page from Game of Thrones‘ playbook: Always cast U.K. actors,” Goldberg jokes), found himself surprised by how these guys took to directing Preacher‘s more contemplative moments. “You’d listen to the way they’d discuss the world of the comics with such intensity and imagination,” the 38-year-old British actor says, “and you’d think, there’s no one else who could possibly bring these books to the screen. I think even they were shocked by how dark they could go. It’s not all penis-in-hand jokes here.” Indeed, Rogen mentions that his favorite scene in the show simply involves Cooper and Gilgun sitting in a jail cell and arguing over the nature of faith, along with the concepts good and evil. “One of my favorite things about the books were the bickering theological discussions the characters would have,” he claims. “We knew we could do the crazy stuff. But when I watched them film that scene, I thought, okay, this is special. This is how I felt when I first read the comics.”

Which isn’t to say that the show is all philosophical chin-stroking, blood-splattered  and broken bones — it definitely has a sense of humor, especially when it comes to movie stars. “Yeah, we still find time to blow up Tom Cruise,” Rogen says somewhat nervously, referring to the show’s running joke about the Scientologist spontaneously combusting. “I mean, I’ve met him before, and he seems like he has a pretty good sense of humor. We’re hoping he’s flattered, because you know, we could have blown up any A-list star, and we chose him.” He lets loose another ah-huh-huh-huh laugh. “At this point, so long as I’m not offending North Korea, I’m pretty much not worried about anything.”