It’s a familiar image: a strapping, confident young white guy seated in the captain’s chair of a spaceship, blaster at his hip, hair coifed just so, one elbow on the armrest, legs spread wide as if to say, “Mine is no tiny penis you are dealing with.” He’s a hero we all know, love and trust do the right thing in the end, whether it’s James T. Kirk or variants like Han Solo, Peter Quill or Mal Reynolds. This is his story. He takes the lead. He gets the glory, and ever it shall be.

Charlie Brooker and Annabel Jones’ anthology sci-fi series kicks off its fourth season with an episode – “USS Callister” – that begins with what seems to be a loving homage to the original 1960s Star Trek. Then, slowly, methodically, the story starts unfurling its true form: a damning exploration of toxic masculinity and the dark side of fanboy nostalgia culture. Here, the heroic captain is anything but, and the misunderstood “nice guy” is the true monster lurking on the dark fringes of the galaxy.

We open on the bridge of the Starship Enterprise-like USS Callister, where the swaggering Captain Daly (Jesse Plemons) and his trusty crew are fighting a space battle complete with harrowing music, old-school special effects and lots of high-grade phlebotinum (“plasmorthian crystals,” anyone?). True to every trope, the good guys win the day.

Naturally, this being Black Mirror – a show that revels in gut-wrenching turnabouts – nothing is as it seems, least of all the hero. Daly is a bit too swaggering; his crew is a bit too trusty. After he defeats the bad guy with suspicious ease, the men launch into a round of “For He’s a Jolly Good Fellow” while the women line up to be kissed by the good captain. Something is deeply wrong with this squeaky-clean scene: The crewmembers’ smiles are plastered on, and there’s a glint of malice in their fearless leader’s eyes.

Cut to gray reality, where we meet the real Robert Daly: a whey-faced office drone with a receding hairline and the stooped posture of the pathologically insecure. He’s the CTO of Callister Inc., a company that designs an immersive MMORPG called Infinity, in which players can explore a virtual cosmos in their very own virtual starships. The members of his “crew” are there too, belittling or ignoring him: The USS Callister‘s bowing and scraping second-in-command, James Walton (Jimmi Simpson), is the ultra-alpha head of the company; the communications officer (Michaela Coel) won’t give Daly the time of day.

Our beta male is the brains behind the game, but everyone at his company treats him like gum stuck to the underside of their shoes. His office is decked out with posters and memorabilia from Space Fleet, a Star Trek-esque TV show from a bygone era whose aesthetic we instantly recognize from the opening scene. So is he a put-upon sweetheart, bullied by his peers, who escapes the drudgery of his day-to-day via a rich but ultimately harmless fantasy life? 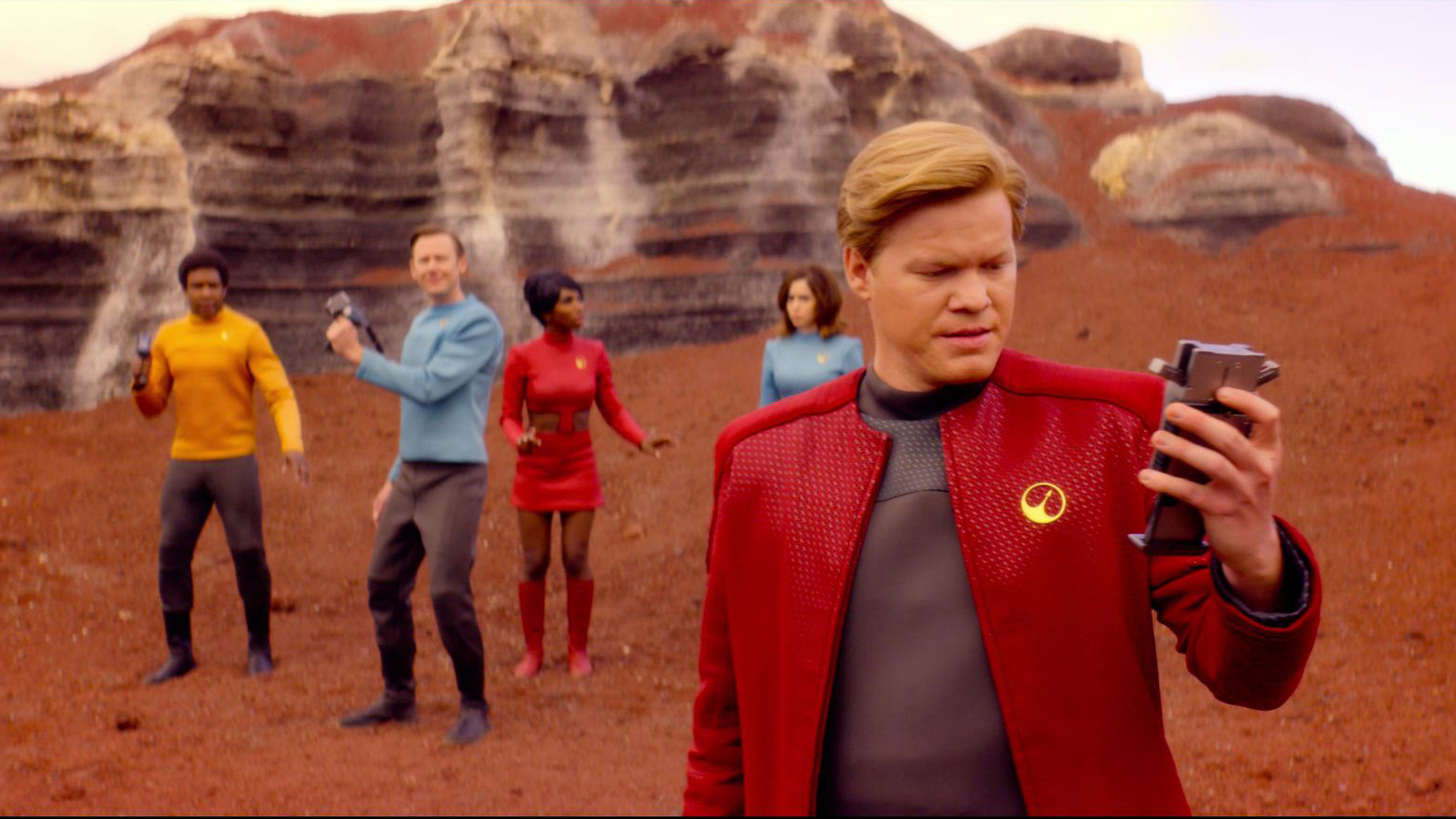 Not so much. Turns out he’s been secretly harvesting his coworkers’ DNA in order to create digital clones to populate his own walled-off version of Infinity. We see him enact the process on Nanette Cole (Cristin Milioti), a new employee who idolizes Daly for his coding genius but commits the grievous sin of not wanting to hook up with him. And so he finds a way to possess her the same way he meticulously collects his complete set of Space Fleet DVDs (and Blu-rays and VHS tapes, natch).

We discover along with Nanette, who wakes up aboard the Callister in a pastel polyester miniskirt, just how bad things are for Daly’s digital prisoners. He’s the god of this tiny universe, forcing his crew to LARP along with him using torture and intimidation. He’s every disaffected nerd-bro with an X-Box and an ax to grind who delights in torturing NPCs (non-player characters) for the sheer sadistic thrill. Except these are real people, and Daly has knowingly trapped them in his own private Hell.

And to make matters worse, he’s pedantic about it, lecturing them about the vintage show’s moral code (“It is a belief system, founded on the very best of human nature”) even as he brutalizes anyone who defies his will. Daly’s rigid adherence to Space Fleet fandom extends to more than just words: Women don’t get guns, no one ever really dies and unwholesome genitalia are morphed into the flat, undifferentiated physique of action figures. This is the last straw for Nanette, who declares in a moment instantly GIFed ’round the Twitterverse: “Stealing my pussy is a red fucking line.”

And that’s when “USS Callister,” thrillingly, becomes a rip-roaring space caper in its own meta-narrative. Except the scrappy, charismatic hero isn’t Daly, with his posturing and his forced Shatnerian speech patterns; it’s Nanette, who’s smart as hell and sick to death of putting up with his expectations.

We’re talking about legions of spec-fiction fans who feel that, in expanding the worlds of beloved sci-fi properties to include more diverse representation, something is being taken from them.

The best Black Mirror episodes – of which “USS Callister” is definitely one – identify issues lurking beneath the surface of the real world and extrapolate them into a future where technology has given them form and heft. In this case, it’s the fanboy backlash that’s become an all-too-familiar presence in our pop-culture conversation. We’re talking about legions of speculative fiction fans on the Internet who feel that, in expanding the worlds of beloved sci-fi properties to include more diverse representation and worldviews, something is being taken from them.

Their complaint, broadly, is founded on the deeply limiting idea that all narratives should center on straight, white men, who have been the unquestioned default protagonists up until very recently. This is an idea that’s particularly ironic in the world of sci-fi, which is all about imagining potential futures in which anything is possible. Daly, on the other hand, builds himself a world that is incredibly constricted, based on his devotion to a retrograde narrative. Does any of this sound familiar?

It’s only a step from there to the current, very loud backlash against The Last Jedi, Rian Johnson’s addition to the Star Wars universe that takes on some of the franchise’s sacred cows: It puts a largely non-white, non-male cast at the center of the narrative, takes aged golden boy chosen one Luke Skywalker in an unexpected direction and asks whether the Jedi Order is really all it’s cracked up to be. Certain loud, angry corners of fandom hated Jedi so much that a petition was created to have it struck from the canon and a group of alt-righters (surprise!) launched a campaign to lower the movie’s Rotten Tomatoes score.

Equal ire has been leveled at Doctor Who, another sci-fi institution that shook off the dust recently when the good Doctor, who’s been played by a series of men since 1963, regenerated into a woman (viva Jodie Whittaker!) And then there’s Star Trek: Discovery, CBS All Access’s long-awaited return to Gene Roddenberry’s universe that has faced unabashedly racist reactions for casting a black female lead (Sonequa Martin-Green).

And just like Daly, they’re deeply missing the point. What Star Wars, Doctor Who and Star Trek have in common – aside from decades of canon and rabidly devoted fandoms – is a vision of vast, multifaceted galaxies and universes teeming with diverse societies and life forms. All three franchises have taken a great leap forward in recent months to make their central characters reflect that ethos, and it’s far past due. There will always be Dalys, but there will also always be Nanettes, too, boldly going where no man has gone before. (Black Mirror itself did, too, in its way — all of Season Four’s six episodes feature female leads.)

The denouement of “USS Callister” offers one of Black Mirror‘s rare hopeful endings — and a low-key revenge fantasy to boot. The Callister has escaped and left Daly trapped in the starless black of his own switched-off bubble universe. (Turns out he was never a god … just an oversized kid burning ants with a magnifying glass.) Released into the vast, Net-connected cosmos of Infinity, the liberated crew is thrilled to make contact with someone from the real world. But “Gamer691” (voiced by Aaron Paul) turns out to be an all-too-familiar kind of asshole who threatens to “bomb them to shit” if they don’t get out of his quadrant.

And rather than bothering to engage in this
unwinnable, childish fight, Nanette claims the captain’s chair and instructs
her crew: “Stick us in hyperwarp and let’s … fuck off somewhere.” They’re
off to explore the universe, and Gamer691 is left shouting into the empty
vacuum of his lonely corner of the galaxy: “You better run! King of space
right here. King of space.” But no one is listening to him anymore.