For the past 15 years, ABC’s The Bachelor franchise has beguiled America with its blend of sponsored fantasy and structured reality, while also being glaringly white. At best, its relationship with race has been noncommital and, at worst, toxic. If people of color do make it past casting – some seasons had zero minorities – they usually don’t last. Latinxs, East and South Asians remain a rarity on the reality series (though half-Asian women fare well once they’re there) and, according to a 2016 analysis, most black contestants are gone within two weeks.

Then, in May 2017, after 33 seasons of The Bachelor and Bachelorette, Rachel Lindsay became the first black woman granted the titular role. An audience-favorite from her stint on The Bachelor, Lindsay’s a charming, funny and beautiful attorney from Texas – great on both paper and camera.

Casting choices for the 32-year-old’s season seemed equally encouraging. Of her 31 suitors, nearly half were non-white. The cast varied in other ways too – career, age, personality and upbringing – so worries of tokenism were somewhat assuaged. Lindsay’s journey began promisingly.

Kenny King Is Ready for His Post-'Bachelorette' Push

There were still cringeworthy moments. One white contestant told her: “I’m ready to go black, and I’m never going back.” Another rapped – wait, it gets worse – that Lindsay was “a girl from the hood” when she actually grew up in a Dallas suburb. But Lindsay took it all in stride and was given room to shine. The franchise seemed to want to do her justice, albeit clumsily.

Unfortunately, any semblance of the series’ newfound integrity disappeared when news about contestant Lee Garrett, a Nashville-based singer-songwriter, emerged.

Garrett, who’s white, came under fire both for (now-private) racist, misogynistic, anti-LGBTQ and Islamophobic tweets he’d once made, as well as his conduct on the show. The season’s most prominent villain, he reveled in goading and gaslighting black housemates Eric Bigger and Kenny King. “I don’t like Kenny at all. I’m going to find joy in smiling and crumbling his miserable world,” Garrett declared.

According to certain contestants of color from previous seasons, antagonization like this isn’t new. Just last year on Ben Higgins’ Bachelor season, black military veteran Jubilee Sharpe was plagued by microaggressions the more she became a serious contender. Lauren Himle, a blonde schoolteacher from the same season, claimed Sharpe wasn’t wife material because she wouldn’t “be friends with all the other soccer moms.”

Still, this was the first time the show milked racial tension as a multi-episode storyline, all while insinuating violence. Promotional teasers hinged on the feud between Garrett and King, repeatedly showing the latter with a bloody eye.

But no physical fight ever occurred; clips of King’s injury were from an unrelated accident. Deceptive editing is standard for the series, yet this took ABC from harmless distortion to moral reprehensibility. America doesn’t need to see another black man bloodied, especially as a cheeky misdirection to racially motivated violence.

Blows weren’t exchanged, but damage was done. When talking to Lindsay, Garrett feigned innocence while frequently and inaccurately labeling King as “aggressive.”

“When you call him ‘aggressive’ – there is a long-standing history in this country regarding black men as aggressive to justify a lot of other things,” explained contestant Will Gaskins, schooling Garrett on his problematic wording.

Garrett continued to use the dog-whistle and eventually was let go. Viewers wouldn’t see him again until the Men Tell All episode, a reunion for the rejected suitors. Garrett’s behavior and tweets – one which compared the NAACP to the KKK – were discussed extensively. 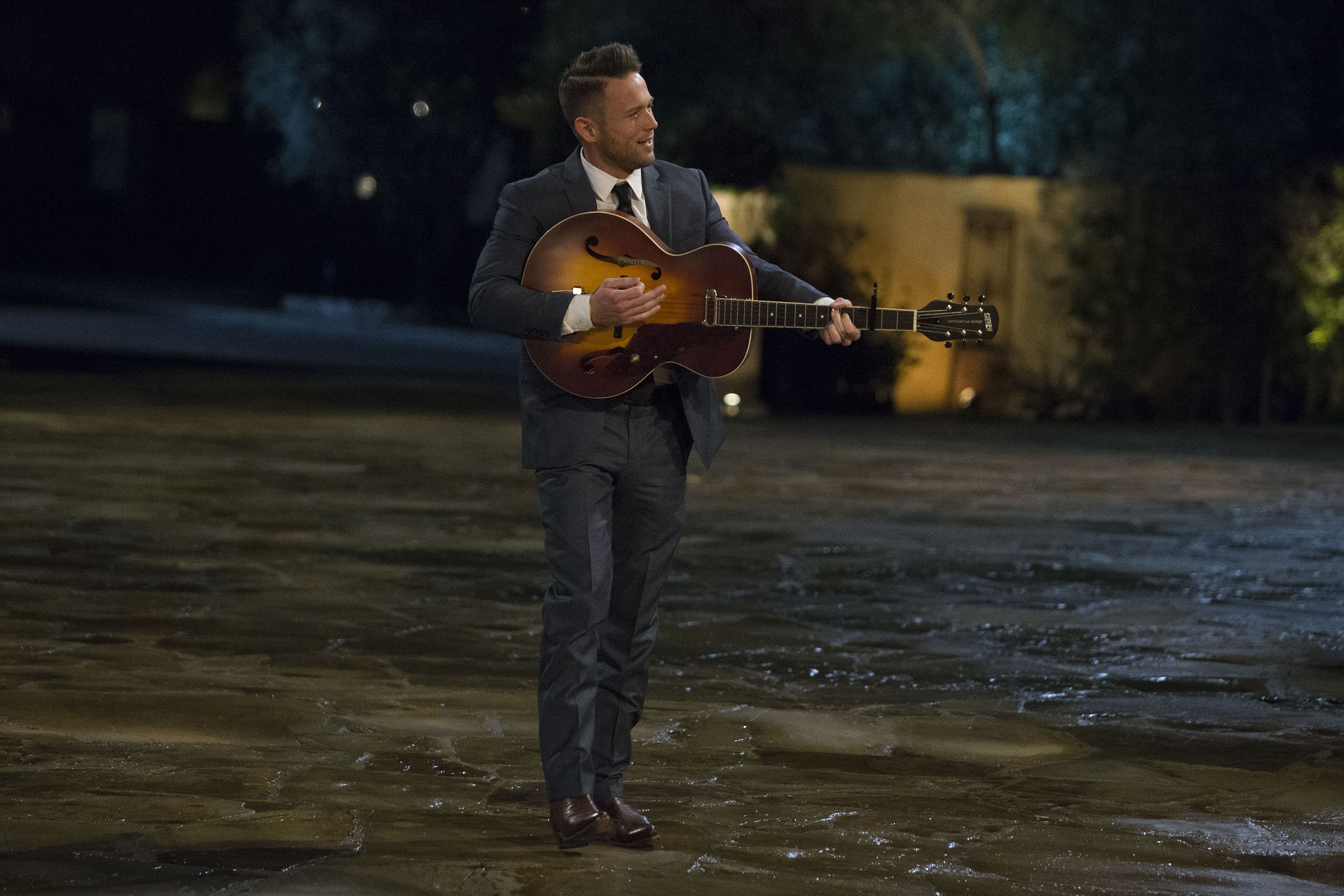 After talking circles, Garrett finally apologized and expressed his need to be “educated” while host Chris Harrison later called the situation “a teaching moment.” And though Harrison seemed earnest in his optimism, the idea that the show has socially progressive undertones seems ridiculous when it’s perennially accused of being exploitative and racist itself.

Even more damning, it appears ABC tried to ensure that bigoted behaviour would emerge; producers had actively scouted Garrett through Facebook—a detail that suggests his casting was calculated, particularly given his Twitter presence and the extreme vetting process all contestants undergo. However, Harrison tweeted that the show had been unaware of the material.

If his abrasive behavior was unknown to them, they still exploited it for ratings and at the expense of their black contestants’ well-being. It was heartrending watching King struggle to prove his decency amidst his demonization. Meanwhile, Lindsay privately broke into tears over pressures she felt as a black woman navigating the situation.

It appears ABC had no real desire to widen their audience; the show was still made with white viewers in mind. Because, for them, however they felt about Garrett, each episode could still be fodder for water-cooler talk. It wouldn’t trigger a fear or traumatic memory, nor would it exacerbate a current reality. It remained a means for entertainment, not dehumanization.

Still, even as the franchise stooped to a new low this season, what’s been wonderful is witnessing people of color defy their assigned roles of prizes and props. Granted, it’s rare to see a black woman onscreen who’s revered as a prize, and Lindsay’s worth fighting for. Yet painting her as a trophy falsely implies her passivity. Ironically, this Bachelorette installment became meaningful only in instances it was like all other seasons: presenting a woman – here, a woman of color – directing her destiny, free to make her own choices.

And though, as Ira Madison III insightfully wrote, the show used black men as props in their race experiment, those men still defied stereotypes, proving their multidimensionality. Anthony Battle, a former athlete and Fulbright scholar, displayed saint-like patience when explaining “invisible racism” to Garrett. Gaskins, a good-natured and well-read sales manager raised in a mostly-white area, was equally charitable with Garrett. (However, neither got much screentime beyond this.)

Even those pulled into race-based drama transcended the tension. King, a professional wrestler and devoted father to a 10-year-old daughter, was described as the “most well-liked guy in the house.” Meanwhile Bigger – who’s in Lindsay’s final three (and the first black man to make it that far) – shows equal parts charisma, swagger and vulnerability. When Lindsay visited his hometown of Baltimore, Bigger was frank about being raised in a “hostile” environment, but viewers also saw the warmth and support radiating from his family.

These are men with stories and layers. When reality TV relies lazily on typecasting and caricatures, it’s regrettable how these weren’t the storylines focused upon – now that would’ve been ground-breaking for the genre. Likewise, having a black Bachelorette is revolutionary only if she’s afforded the same luxury of her predecessors – to have her race be a feature, not a fixation.

Last Monday, when asked to address Garrett, Lindsay held nothing back: “I have the opportunity to be a spokesperson for African-Americans, for women, and I just feel like you had such an amazing opportunity to be surrounded by different people and different cultures and you didn’t take advantage of that.” The same could be said to ABC.

Prior to Lindsay’s announcement as Bachelorette, some speculated America wasn’t ready for a black person to be the face of the franchise (apparently the White House is more progressive than the Bachelor mansion). Now, as Lindsay’s season draws to a close (the final episode airs August 7th) and she remains beloved, it appears that America actually could handle it, but ABC could not. At least not gracefully.