Rock & roll and Anthony Bourdain were a natural fit. So it made sense that artists from Alison Mosshart to Josh Homme would pop up on his various shows, acting as culinary tour guides, drinking buddies, performers or all of the above. But in keeping with Bourdain’s adventurous spirit, he made a point of meeting up with musicians representing many different regions and cultures. Over the years, his guests included System of a Down’s Serj Tankian, African pop legend Youssou N’Dour, Morocco’s Master Musicians of Jajouka and many more. Here, in the wake of Bourdain’s tragic passing, we look back at some of his most memorable encounters with musicians.

Alice Cooper (No Reservations, 2008)
Bourdain’s trip across the U.S. Southwest takes him through Arizona, where he stops in at Alice Cooper’stown in Phoenix to visit with the shock-rock legend himself. The segment at Cooper’s now-closed theme restaurant is notable for just how far it veers off track, with the camera sitting still on the two for practically a full five minutes as they go deep on baseball, touching on, among other things, hometown loyalties, changing stadiums (“The old Tigers stadium smelled like the Tigers,” Cooper says, which is apparently a good thing) and bringing kids to their first game. The whole thing has absolutely nothing to do with food, music or travel, but it’s an extreme cool, revealing exchange nonetheless. Oh – and Bourdain chows down on Randy Johnson’s Big Unit (a 22-inch long hot dog, in Alice Coopers’town speak).

Anthony Bourdain Was an Iconoclast Whose Curiosity Inspired Countless Fans

Das Racist (No Reservations holiday special, 2010)
Bourdain decided to one-up every other chef’s holiday specials by forgoing the typical cookie recipes and cozy fireplace scenes. Instead, he booked Brooklyn rap crew Das Racist for a surreal music video. It begins with Bourdain cheerfully preparing to look for an ingredient in the refrigerator only to find Himanshu Suri and Victor Vazquez’s heads in his egg carton. They then descend into a silly, Bourdain-referencing song “Ek Shaneesh.” Suri raps: “I’m from Queens, where ain’t shit to do but cook/Watching Tony Bourdain, plus I copped his book/Plus I copped his look/That means T-shirt and jeans.” The bit ends with Bourdain musing that he “needs to clean out [his] fridge more often.”

Josh Homme (No Reservations, 2011)
Bourdain’s trip to the California desert took him to a place where, in his own words, “people start to vibrate at a different pitch than they do elsewhere.” And who better to be his guide and companion than one of these very people – Queens of the Stone Age frontman Josh Homme. Together, the two visit a bizarre swap meet (what Bourdain calls a “the Thunderdome community of off-the-grid vendors selling everything imaginable”), drive around in old cars and even record a song together – “Lonely T-Bird” – at Rancho De La Luna studios in Joshua Tree. Mostly though, they drink lots and lots of tequila, at one point working off a previous evening’s hangover with a ham-and-cheese omelette that looks to be stuffed with an entire pig (Homme) and a massive plate of chili, onions and eggs for Bourdain. “Mmm, grease,” the host mumbles appreciatively. 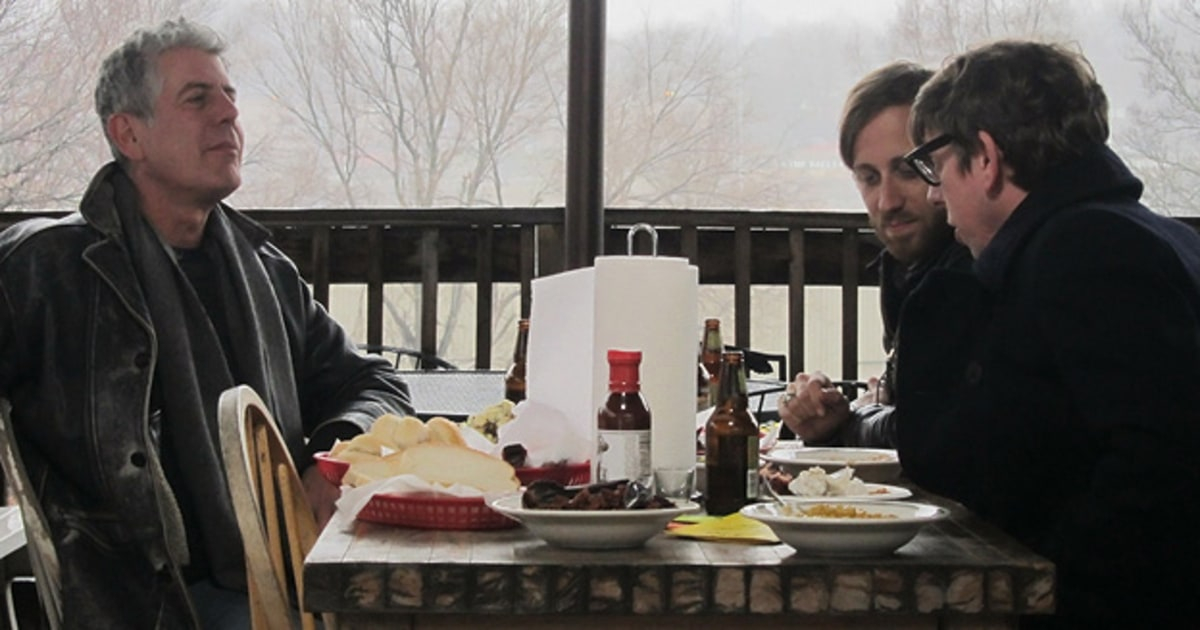 The Black Keys (No Reservations, 2012)
Bourdain welcomed the Black Keys onto No Reservations a couple years after the band had their commercial breakthrough with their sixth album Brothers. The trio meet up in Kansas City where they eat ribs and brisket at Woodyard Bar-B-Que in an episode that hilariously frames the Keys as a pair of random men who pick up Bourdain off the side of the railroad tracks in their nondescript van. At Woodyard, they discuss touring life and what they ate when they had little money to waste on the road. “When we first started touring, we had $5 a day that we could spend on food,” drummer Patrick Carney said during the meal, noting Dan Auerbach’s penchant for wonton soup.

The Master Musicians of Jajouka (Parts Unknown, 2013)
While in Morocco, Bourdain met with a group of musicians who inspired everyone from the Rolling Stones’ Brian Jones to free-jazz pioneer Ornette Coleman: the Master Musicians of Joujouka. In the 2013 Parts Unknown episode, Bourdain sat in a circle around a fire and watched the ensemble sing and play drums, violin and other stringed instruments and pipes for what he called a “powerful style of Sufi trance music.” “For years, if you were a rock god, you had to come here,” he said. “Take in the crazy percussion and strings and pipes that took you to another place.”

Iggy Pop (Parts Unknown, 2015)
Bourdain and the Stooges frontman became unlikely friends in recent years. Pop appeared on a Parts Unknown episode that focused on Miami, where he lives, in 2015, but then Bourdain popped up in Queens of the Stone Age frontman Joshua Homme’s Pop doc American Valhalla to interview the singer in his home. Bourdain also interviewed the singer for British GQ and the two posed next to each other with their shirts off. “I wouldn’t have thought back then in my dorm room that all those years later I’d be eating healthy with Iggy Pop,” Bourdain says in the Parts Unknown episode. “Barbecue shrimp for the godfather of punk, I get wild and crazy with some roast pork.”

Questlove (Parts Unknown, 2015)
While Bourdain was in Miami hanging with Iggy Pop, he also met up with the Roots’ Questlove. “Every time I check Instagram, you’re eating with one of my culinary heroes,” Bourdain told the drummer and producer in the 2015 episode of Parts Unknown. “You’ve eaten at Jiro. Also, [sushi legend Jiro Ono] seems to like you better than me.” Over deviled eggs, Bourdain and Questlove discussed the differences between the sound of dance music in Miami and other locales. Bourdain was so taken by his time with Questlove, he even published an article on CNN.com about his best finds with the drummer.

Margo Price (Parts Unknown, 2016)
Nashville’s legacies of music, food and the marriage of the two are well-documented territory, but leave it to Bourdain to unearth something new and exhilarating about the town. A couple years back, he traveled to Music City, where he met up with rising country star Margo Price, visiting her East Nashville home for a dinner party and taking in a live show. In a post written for CNN, Bourdain dubbed Price “a country music artist who reminds us what country music really is.”

Alison Mosshart (Parts Unknown, 2016)
One of Bourdain’s most memorable musical coups was getting Kills and Dead Weather singer Alison Mosshart to throw a rock & roll house party in his honor. As the bands crank it up in the living room of her Nashville compound – affectionately known as Disgraceland – Bourdain dutifully labors over the night’s menu of pork dumplings, brisket, pulled pork, deviled eggs and more in the kitchen. It’s a testament to the cool quotient of the guests on hand that Dead Weather drummer Jack White plays only a humble background role in the segment.

Youssou N’Dour (Parts Unknown, 2016)
Bourdain ate a spread of seafood while on a trip to Senegal for a 2016 Parts Unknown episode with the country’s famous singer and percussionist Youssou N’Dour. Together, they discussed the similarities between African cuisine and that of the American South and how Senegal, a predominantly Muslim country, should be recognized as a positive example in a time when people are afraid of radicalized Islam. They also had a group meal, eaten from a communal platter, that Bourdain deemed awesome. Around the time the episode aired, Bourdain also posted a photo of him enjoying N’Dour’s music live.

Steve Albini (Parts Unknown, 2016)
Shellac and Big Black co-founder and indie superproducer Steve Albini is clearly a man after Bourdain’s heart. During a Chicago-centric episode of Parts Unknown, he takes the host to Chicago steak-sandwich institution Ricobene’s, where the two discuss the Windy City’s unpretentious outlook on food, music and making a living. “I flatter myself by thinking that people in Chicago care more about what they’re doing than what they’re getting paid to do it,” Albini opines, with a mouthful of food. 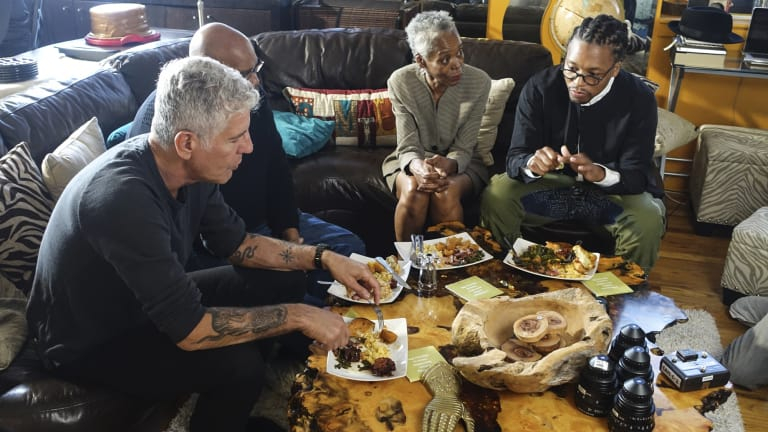 Lupe Fiasco (Parts Unknown, 2016)
Bourdain always made a point of exploring all sides of life in a given city, and one of the most powerful examples of his shows’ range came during a visit to Chicago, when he sat down with Lupe Fiasco for a home-cooked meal and a sobering look at the skyrocketing murder rates on city’s South Side. “The sad part is that it’s been like this,” Lupe says, sitting alongside his mother, who attests to the violent turn the city took in the Seventies and Eighties. “And the only reason it’s a story now is because white people are looking at it.” He also speaks to the difficulties he faces as a rapper with a social conscience. “A lot of people in the hood won’t take me seriously,” he admits. In the true Bourdain spirit, the segment brings together real food with real talk.

Harley Flanagan (2016)
In 2016, Bourdain interviewed NYC hardcore legend Harley Flanagan – who also happened to be Bourdain’s daughter’s jiu-jitsu instructor at the time – for the New York Natives website, following the release of the Cro-Mags co-founder’s memoir, Hardcore: A Life of My Own. The two men traded memories of the New York music scene in the Seventies and Eighties; though Bourdain admitted to never having seen the Cro-Mags in concert, he did recall going to Max’s Kansas City in 1980 and seeing Flanagan – then a 13 year-old member of the Stimulators – running around like he owned the place. The respect between Bourdain and Flanagan was clearly mutual: “My mom would be so fuckin’ thrilled to see me and you talkin’ about this,” Flanagan said, visibly misting up. “She was a big fan of yours.”

Mark Lanegan (Parts Unknown, 2017)
“I wanted to work with Mark Lanegan,” Bourdain wrote on the Parts Unknown website last year. “I wanted to do an hour of television absolutely saturated with, scored by, and featuring Mark Lanegan and his music. I wanted to hear some of my favorites played over wide shots of the Puget Sound. I wanted to smoke weed legally, listening to his songs. And I wanted every single person who watches my show and isn’t already a fan of his to experience his music. It’s that simple.” The former Screaming Trees/Queens of the Stone Age singer, whose dulcet growl can be heard on Parts Unknown‘s theme song, took a characteristically more acerbic view of his appearance on the show’s “Seattle” episode. “The fact that you had us on the show,” he told Bourdain, “made me realize that you’ve run out of things to [talk about].” The episode’s final four minutes – in which Bourdain demonstrated how to properly roll a joint to the tune of Lanegan’s solo track “Strange Religion” – remains one of the greatest closing sequences in the show’s history.

Serj Tankian (Parts Unknown, 2018)
When Bourdain needed a tour guide for Armenia – the land-locked Middle Eastern nation that was once the target of a genocide – he turned to an Armenian-American musician who has sung and advocated for the country: System of a Down singer Serj Tankian. Together, they drove around the country in a convertible, ate in one of Yerevan’s best restaurants (where Bourdain teased Tankian about being pescatarian) and crashed a family dinner where they discussed Armenian customs and how most Armenians around the world are diaspora. “I needed an Armenian to push me over the edge, help me find a window, a lens with which to look at a country which for some reason I’d managed to not visit on my travels,” Bourdain says in the 2018 Part Unknown episode. “Then this guy reached out: Serj Tankian … and the whole thing started to fall into place.”