This season, a champion may finally emerge. Six years in, and still no U.S. competitor has conquered American Ninja Warrior, or its formidable final obstacle, Mt. Midoriyama. That’s understandable, considering everything that comes before the ascent – regional qualifiers and finals, three preliminary stages at the national final in Las Vegas and a 77-foot rope that leads to the summit (and the $1 million prize that, presumably, goes to the winner). Challengers push, pull, lift, leap, duck, dodge…and, ultimately, always fail.

In short, American Ninja Warrior is unlike any other competition on television, a show designed to defeat all comers. And perhaps because of that, it’s steadily grown in popularity, rising from a niche cable oddity to a network series that attracts five million viewers every week. The seventh season begins tonight (8 p.m. ET on NBC), and to bring you up to speed, here’s a look back at ANW‘s transformation from Japanese-inspired cult show to genuine summertime juggernaut.

Guts, Glory and Goddamn Snacks: A History of 'Hard Knocks'

Sort of Like ‘Sasuke’: Seasons 1 – 3
Though American Ninja Warrior premiered more than a decade after its predecessor, Japan’s Sasuke, the U.S. version heavily reflected its parental influence during its first three years. Almost all of the obstacles were direct imports from Japan, and, after the regional qualifier, final and a Survivor-style “boot camp,” the ten highest-performing American ninjas flew to Japan to compete on the Sasuke course.

The major difference between the two shows was that, in Japan, ninjas had to complete the course in a certain amount of time, and any or all – or none – of the 100 competitors could advance from stage one to two. In the American version, the top 30 advanced regardless of their speed. The courses were also slightly different. In Sasuke, stage two was entirely new, while on the American course, obstacles were simply added to stage one.

In comparison with later eras, the first three seasons attracted a relatively small pool of competitors. The first year, hopefuls could only compete in Los Angeles (the last time a qualifier would be held there), and for the next two years, only in Venice Beach (which has held a qualifier ever since). In addition, its initial home, G4, only broadcast 12 hours of ANW the first season and 18 the next; by comparison, last season ran for 26 hours. Limited both by geography and visibility, the show featured mostly amateurs in comparison to the ninjas we’d see in later seasons.

From the very beginning, though, the general structure of the qualifying course was more-or-less apparent. The Quintuple Steps open, followed by a jolt and a balance test. Then, it’s two upper-body obstacles (usually one that’s grip strength-intensive) and the Warped Wall.

The Transition: Season 4
In the fourth season, ANW begins to transform from zany pastime to serious sport. In addition to Venice Beach, Dallas and Miami each hosted two regional qualifiers. As a result, the ninja universe greatly expanded. Competitors became more intense. It seemed like everyone and his brother (and his doctor and stepfather) was building a course replica in their backyard. Ninjas like Sean Morris started combining personality with genuine talent, and after three years, veterans were emerging with their own intriguing storylines. Drew Drechsel had an impressive comeback narrative after he tore his ACL and MCL on the Half-Pipe Attack in Japan the previous year – not only did he return (and make it to Vegas), but he recruited Joyce Shahboz, his physical therapist, to compete as well. 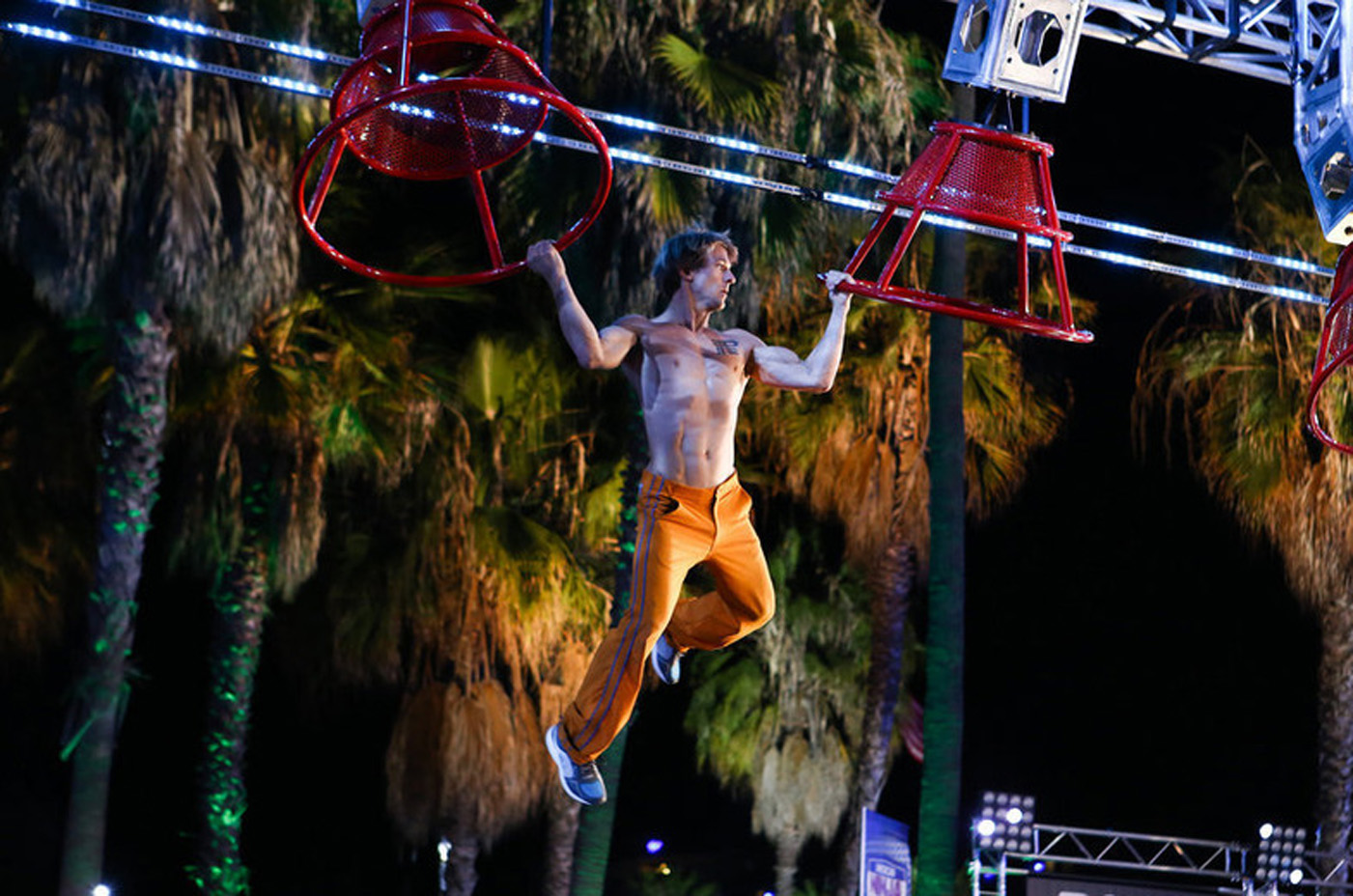 But the transformation was not complete. Even though Mt. Midoriyama moved to Vegas in 2012, and competitors no longer traveled to Japan, I believe that the fourth season cannot be considered part of Viva Las Vegas for one reason: most of the regional qualifiers were still held during the day, a seemingly trivial but critically important point.

It’s obvious that the show not only looks better when run at night, it’s fairer, too (compare Miami’s qualifier that year to the one in Dallas). The stadium lights produce more saturated colors and eliminate potential issues caused by shadows and the sun. Filming after sunset, though, is a logistical nightmare. Temperatures drop. Fans fall asleep. The crew becomes nocturnal. But more importantly, athletes must adapt. After season four came, competing on American Ninja Warrior was no longer a silly thing to do on a whim one weekend. It was a grueling, circadian-rhythm-busting commitment. When the producers decided to film exclusively at night, they took ANW to the next level – the Vegas level.

Viva Las Vegas: Season 5 – 7
By 2013, ANW was truly a national competition. Four cities hosted regional qualifiers that year, then five the following year, and six for this upcoming season (including one stop open only to active-duty and retired military personnel). Thousands submit audition tapes for the 100 or so spots in each city, and hundreds camp out before the competition with no guarantee that they’ll run, sometimes for more than a week.

As more locations are added, competitors’ training has to keep up. Each additional regional city means eight more obstacles (four for the qualifier and four for the final), which means ever more training possibilities. As a result, those handmade backyard courses have transformed into professional gyms like Chicago Ninja Academy, which have full-scale replicas of all but the most elaborate obstacles.

The obstacles themselves have also become more difficult. The Cargo Net, for instance, has become progressively more challenging and continues to be hung closer and closer to the water, making for memorable moments like masked man Flip Rodriguez’s foot slip in 2014, which sent the presumptive favorite packing. Greater difficulty, though, has led to greater feats, like Kevin Bull inverting the cannon balls at the 2014 Venice city finals. Kacy Catanzaro, the first woman to complete a city finals course, won praise for her mesmerizing run, and deservedly so, but she is by no means the only amazing woman to compete (check out Meagan Martin, Michelle Warnky and Nika Muckelroy.)

And tonight, the competition begins once again. Will this be the year one brave man or woman finally makes it to the top of Mt. Midoriyama? Probably not, but that’s half the fun. I’ve watched Ben Wicks at the 2012 regional finals at least a dozen times, and I’m still wondering what went wrong on Cycle Road (as I’m sure he is, too). Brent Steffensen, the most accomplished American ninja in 2012 (and the only person to clear stage two of Mt. Midoriyama at the time), didn’t even make it to the 2014 Dallas finals. Therefore, who will win – if anyone – is impossible to predict, but whether you watch for the wipeouts or the wild athleticism, American Ninja Warrior never disappoints. Unless you’re a contestant, that is.