People come to Los Angeles so they can have an experience like Pendleton Ward’s: Two years after arriving, he was about to move into his car. Three years after that, he had one of the biggest cult hits on television: a rapturously surreal post-apocalyptic animated saga that has since spawned a merchandising empire, 14 million weekly viewers, a 17 million-strong Facebook following and virtually unanimous acclaim.

And it probably would to nearly anyone except Pendleton Ward, the cult­-hero creator of Adventure Time, which in three years has generated 176 11-minute episodes with a dizzying array of not just characters but dimensions, plotlines, parallel realities and origin stories.

Best. Show. Never.: The Greatest TV Series That Never Were

“Dealing with people every day wears on you,” Ward says, squeezed into a desk chair in the Burbank, California, Cartoon Network building. A four-day-old bowl of Fruity Pebbles lies neglected at his elbow, the milk evaporated to leave just a rainbow of crud stuck to the sides of the bowl.

“To spend that extra energy and time you don’t have, to make something that’s worth making, to make it awesome, wears you out,” he says. A backward red cap hides the top of his head; a checkered shirt buttoned to the top conceals his plump body; and on his face, there is not so much a beard but a hair force field, keeping anything from penetrating the world he’s created for himself. “It’s a beast of a show. And the more popular it gets, the more the ancillary things – like the merchandise and games and everything – keep getting bigger.”

And so, Ward confesses, one day during Season Five, unbeknownst to his fans, “I quit because it was driving me nuts.”

He says this not with sadness or frustration, but with relief. “For me, having quality of life outweighed the need to control this project and make it great all the time.” So he stepped down from running Adventure Time to become simply one of the show’s writers and storyboard artists.

Asked if he’d ever want to create another TV show, Ward responds with horror: “No, never. That sounds like a nightmare!” 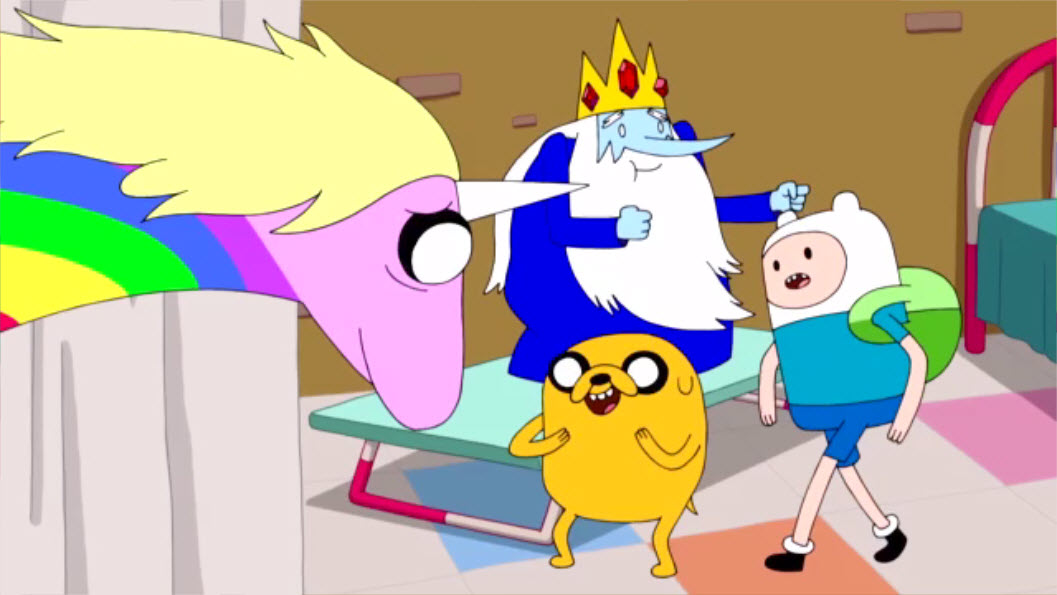 It’s not that Ward is ungrateful. It’s that helming a hit series generating top-10 games in app stores, comics that have collectively sold hundreds of thousands of copies, and nearly a thousand individual items of merchandise is just not part of his DNA. He would far prefer to be at home with the lights off and the curtains closed, playing a video game and eating pizza.

Yet somehow one of the most introverted people in Hollywood has created a show that, arguably more than anything on television, connects in the deepest way with children, teens and adults alike. Adventure Time is ostensibly an animated children’s show focusing on the adventures of two interspecies best friends and freelance heroes, Finn the Human and Jake the Dog. But it belongs in the pantheon of kids’ programming – including Pee-wee’s Playhouse, Ren & Stimpy and Ralph Bakshi’s Mighty Mouse: The New Adventures – that has an immense cult following among adults. This may be because the Adventure Time world is so imaginative, many think that to invent this kind of stuff, you’d have to be on drugs (which Ward says he doesn’t do).

Tom Kenny, the actor who plays the show’s sympathetic villain, the Ice King, sees a lot of Ward written into this character. The Ice King was once a much-loved archaeology professor named Simon, whose Trotsky glasses happen to look exactly like Ward’s. But one day on his travels, Simon came across a crown. And whenever he put it on, he gained incredible powers – which include flying, generating ice and, probably not coincidentally, the sprouting of a huge beard. But he also became misguided, narcissistic, dangerous and partially insane.

“I would guess that the way the Ice King feels like he’s going mad and things are spinning out of his control, that must be what it’s like to run a show like this,” says Kenny, who is also the voice of SpongeBob. “I’m sure Pen has felt like he’s losing his grip on reality because he’s the arbiter of everything. Sometimes it’s burdensome and you yearn for simpler times.”

Recently, Ward signed up for improv classes because he thought they would be a fun distraction. But, it turns out, all they did was make him even more uncomfortable. “I didn’t think that I had a bunch of walls until I started taking that class and then I was like, ‘Whoa, this is forcing me to get out of my comfort zone,'” he says. “I realized I love my comfort zone. I spent a long time building my comfort zone. It’s precious to me, and I love it and I want it.

So what is Ward protecting himself from?

He is at a loss to figure out what it is: All he knows is that he prefers being isolated, though, like the Ice King, he has a “craving to be social and hang out with nice people and have them think that I’m nice, which doesn’t make any sense to me.”

But in the end, isolation usually wins out. “It’s just general depression, probably,” he concedes, looking uncomfortably around the office, every nook and cranny of which is filled with images and products from a fantasy world that has turned into a multimillion-dollar business. “That’s what that is. I don’t know, everyone battles that same thing.”

The 32-year-old ward has never quite felt like he fit in. Growing up in San Antonio, the youngest of three brothers, he was an outcast even among the outcasts in his peer group. “As a kid I was very conscious of trying to be functional and not be too odd,” he recalls. “I liked figuring out how people worked. I had a notebook, and I’d take notes about people. It was mostly about figuring out how to make girls . . .” He trails off, then corrects himself. “What’s this girl like and why do I like girls?”

As a child, Ward never met his father. He was raised by his mother, Bettie, the daughter of a Texas rancher and oilman. She had been a groupie for the Steve Miller Band, sung with Joe Ely and performed in off-Broadway rock musicals before making a living as a visual artist. She encouraged Ward’s creativity, and by the time he was in first grade, he was making flip books from his mom’s Post-it notes. 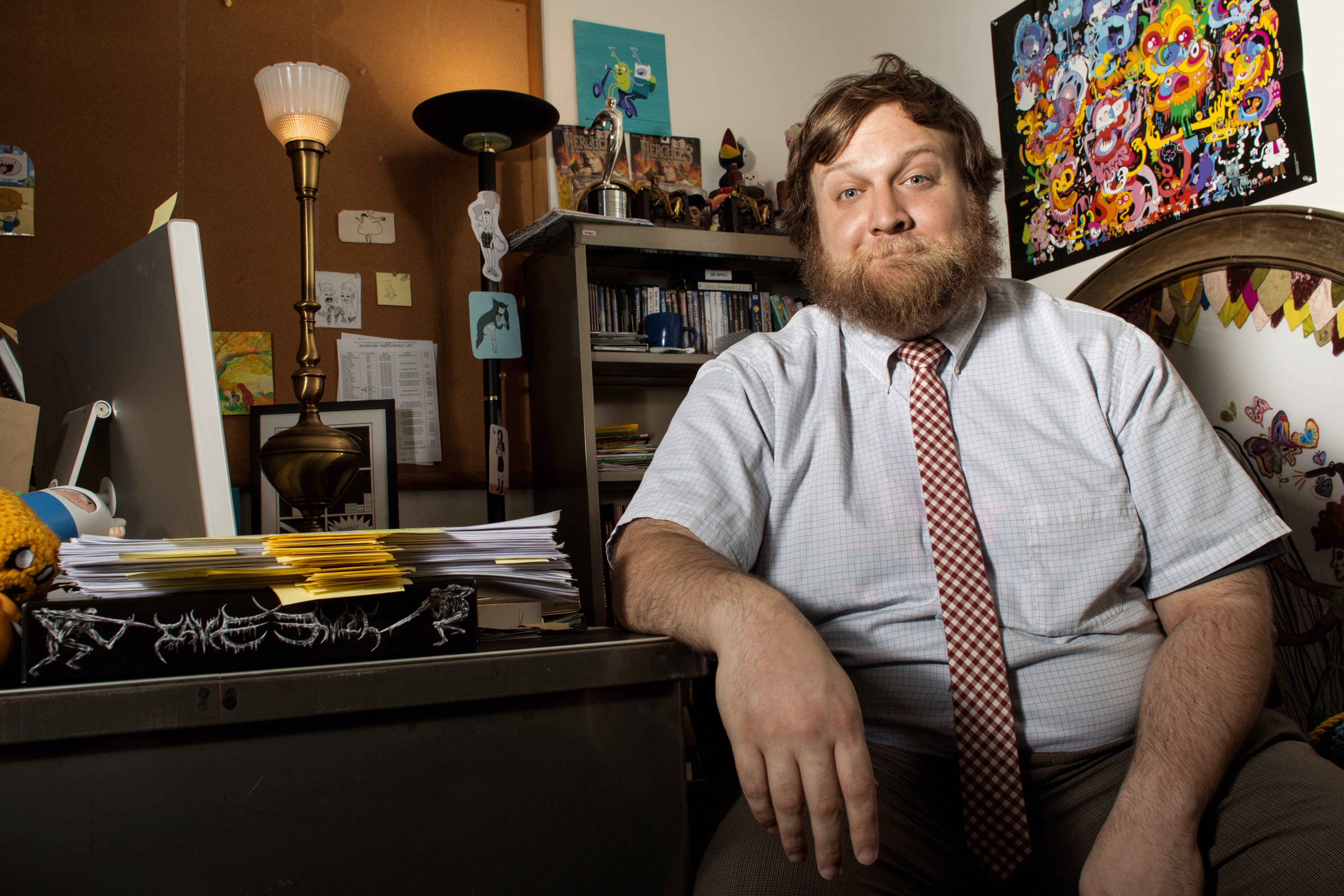 If the Ice King is Ward’s dark side, then Finn, the show’s 16-year-old protagonist, is his light side. What makes Finn such a compelling character is that he is innocent and good-hearted, always willing to help out a friend or rescue a princess. Even his mistakes come from an ultimately pure and well-intentioned place.

“I was a sensitive kid,” Ward recalls, describing a child who sounds not coincidentally like Finn. “I remember being really loving – and putting my head on people’s shoulders when I was little until people started telling me I was weird.”

In addition to being into Dungeons & Dragons games and The Simpsons – two of the biggest influences on Adventure Time – Ward was also obsessed with being a good person. When his friends or brothers cursed, he’d tattle on them. As he grew older, he tried to raise money to save the rainforests, dreaming of being, as he puts it, “a Greenpeace hero.”

“I was fat and I had a bowl cut and I had rollerblades,” he continues. “I would put my Magic cards in a backpack and skate down to the comic shop. Just superawkward.”

Eventually, Ward found a place where a superawkward kid could fit in if he was talented: the California Institute of the Arts, better known as CalArts. There, Ward met a coterie of artists and animators who shared his obsession with cartoons and comics. “Even back then, his films were the funniest ones being made,” recalls Adam Muto, the classmate of Ward’s who turned him on to alternative comics. Later, Ward would bring Muto on as a storyboard artist and, after quitting Adventure Time, train him to take his place as showrunner.

When one of Ward’s films was accepted into a year-end show at CalArts, a producer at Frederator, an independent animation studio, saw it and was impressed. Soon Ward was working on shorts for Frederator’s Random! Cartoons show on Nickelodeon, bringing along his CalArts friends. One of those shows was a seven-minute short called Adventure Time, which racked up over 3 million views on YouTube within a year of its release in 2007. Nickelodeon rejected Ward’s pitch to turn the short into a series. So through another friend from CalArts, Ward was hired to work on Cartoon Network’s Marvelous Misadventures of Flapjack, where he eventually got the green light for Adventure Time in 2008, though he had to make a few changes to please executives there, such as giving Finn and Jake a home instead of making them wanderers living in tents as he’d originally intended.

“If the show hadn’t been picked up, I would have moved to the Midwest and gotten a cheap apartment,” Ward says. “I would have been that guy with a telescope watching my neighbors, getting pizza and putting a sign on the door that says ‘Leave the pizza outside.’ But I was forced into a situation where I had to maintain my social dignity.”

The success of the show, however, has barely changed Ward’s student lifestyle. Until last year, he continued to live in Burbank with four roommates. To meet his deadlines, he goes to coffee shops because, since he doesn’t like making eye contact with people, he’s forced to look down at his work. At meals and social events, he prefers to sketch rather than make conversation, describing drawing as “my baby blanket that I take with me everywhere.” And where many in L.A. meditate or do yoga, he says, “I go to comic shops because I like to just listen to nerds arguing about nerd stuff to relax.”

With his obligations to Adventure Time now reduced, Ward is looking for his next creative challenge. He wants to write an Adventure Time movie and create an original video game. But he’s in no rush.

“Whatever the next thing is, I just want my brain to be happy doing it,” he says. “My state of mind is superimportant. I’m so fried, so I have to sort of work within the confines of what my brain can handle.”

As an example of what he can handle, Ward shows me several sketchy black-and-white shorts he made with a friend called Animation Pals. “I love this stuff,” Ward says after playing an enjoyably quirky episode. “This is the most rewarding thing I’ve done in a long time because I made my half of it with my own hands.”

He sighs and looks down at his stomach. “It’s nice to just be sleepy and make stuff,” he says. “That’s the root of what I like doing. Make stuff on my own and fall asleep.”