Last night The Walking Dead ended its sixth season with a barbed-wire-covered baseball bat smashing into the head of … well, someone. We’ll have to wait until next October to know which beloved character just got bludgeoned by the series’ new supervillain: a grinning, whistling sociopath named Negan. In the meantime, we’re left to reflect on what’s happened over the past year, and to tally up what we now know about AMC’s smash hit zombie drama that we didn’t know 16 episodes ago.

1. The Deadverse is getting “larger”
For five seasons, the show stuck to a predictable modus operandi: Rick and his cohorts would migrate to a new semi-fortified location; they’d purge of zombies just in time to find out that their real enemy was some other group of humans who wanted to kill them. But now that our heroes have settled into the walled Virginia subdivision known as the Alexandria Safe Zone, the “walkers” are the least of their problems. The days are long gone when survivors of the apocalypse could expect to stumble across an abandoned grocery store or a house full of canned goods. Now that supplies are less plentiful, agriculture and trade are essential. This means the Alexandrians have to start thinking about negotiating with the remaining pockets of civilization, instead of fighting them.

'The Walking Dead': What to Know for Season 6 Midseason Premiere

AMC’s slogan for the most recent stretch of eight episodes has been “A Larger World” — which is increasingly looking like an understatement. Already, the ASZ has struck a deal with the agrarian community called the Hilltop. Can they make peace with Negan’s “Savior” army and/or the anarchic “Wolves?” Or with the as-yet-unnamed armor-clad horse-riders who whisked Carol and Morgan away during the finale? Readers of Robert Kirkman’s original comic book series know that all of these factions — and more — are going to play a major role in a story that’s increasingly becoming more like Game of Thrones than Night of the Living Dead.

2. Negan ain’t nice (and that’s pretty sweet)
One could argue that the only thing that really happened on The Walking Dead this season was that the show finally introduced Negan, one of the comics’ major characters. One could also argue that the intro was way too long in coming, after Rick and the others had multiple run-ins with the Saviors that made them look either overconfident, inept, and small in number; or like some kind of magically regenerating, overwhelmingly enormous tribe of ice-cold badasses.

There are ample reasons to complain about the way the show’s writers have handled the Saviors thus far … or at the least in the way they’ve had Rick handle them (by murdering a dozen or so and then thinking, “Yeah, that should just about do it”). But judging by Jeffrey Dean Morgan’s performance as Negan in the last 10 minutes of the finale, the series’ new Big Bad will be worth all the extended build-up. Morgan was suitably mean, wielding a spiked bat with a certain malicious panache. More importantly, his Negan seems cruelly logical — and maybe even likable, in his own weird way. It should be fun to watch the contest of wills with him next season.

Or maybe not, given that…

3. Our heroes seem to be getting dumber by the episode
Rick looked like a reasonably okay leader back when he was giving the Alexandrians little pep-talks about toughening up. But beginning with his disastrous half-plan to herd zombies away from the town in the first half of this season, his authority has been increasingly hard to respect. Even worse, previously level-headed folks like Daryl, Michonne, and Abraham seem to have been infected by his incompetence. The last few episodes have seen our main characters making impulsively moronic decisions that have put their own lives in danger and the ASZ at risk. They’re not really working as a team, nor do they seem to know or care what everybody else in the group is thinking or feeling. That’s going to be a problem if they’re going to beat the Saviors, who are so organized that they almost operate as one body, controlled by Negan’s keen mind.

4. Carol and Maggie may be changing places
Ever since Carol torched her disease-ridden friends at the prison for the good of the group, she’s been The Walking Dead‘s most hardcore character: a woman so bent on survival that she’s argued the kind-hearted Morgan should be exiled or killed, just because his gentility could be life-threatening. But toward the end of this season, Carol developed romantic feelings for longtime Alexandrian Tobin, and subsequently lost a lot of her bloodlust. She eventually fled the because, according to her own perverse logic, she thinks her hesitancy proves that she doesn’t love her friends enough. In the season finale, she seemed ready to die, rather than living like a sap. 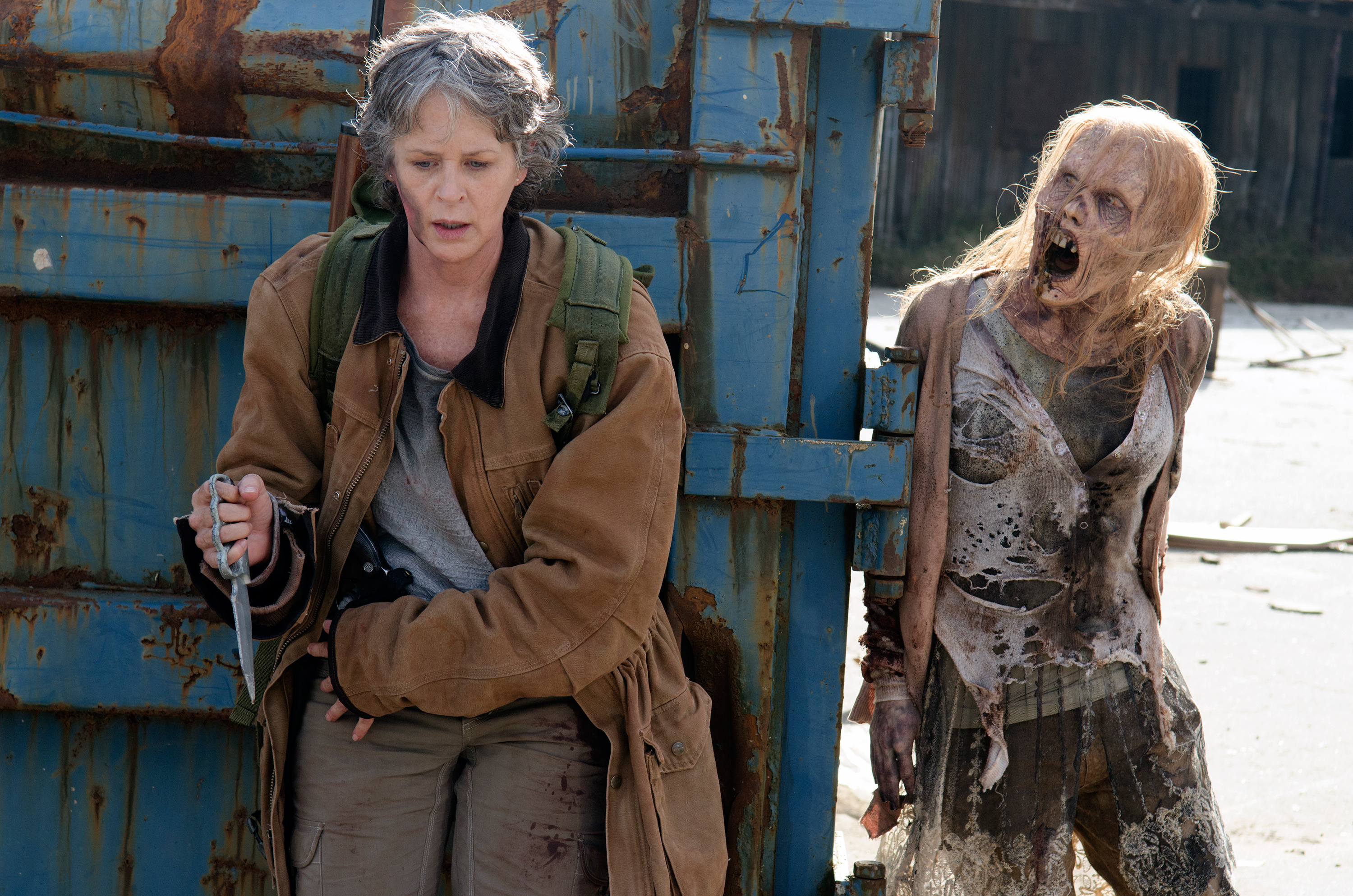 Meanwhile, in this most recent stretch of episodes, the valiant Glenn has violated his own nature and has killed human beings who weren’t actively threatening his life. He did this at the command of his wife, who struck a deal with the Hilltop to acquire food and medicine in exchange for her friends’ deadly skills. When Maggie was captured by the Saviors a few weeks back, she seemed to realize that she can’t be as merciless as she’s pretended to be. Still, the repercussions of both her and Carol’s personality crises should continue to resonate into next year.

5. Pacing isn’t this show’s strong suit
The first half of Season Six covered just a few days, aside from a flashback or three. Then the back half took huge leaps ahead in time from episode to episode. Meanwhile, big changes, like Carol’s softening, fell into the gaps, going unseen by the audience. In a way, that clumsy command of narrative pace is nothing new for TWD, which once spent what seemed like an interminable amount of time camped out on a dark, dull farm during season two. Still, the alternating slowness and choppiness has played a large part in some rising fan frustration over the past year.

Which brings us to our last point ….

6. There’s a lot riding on Season Seven
The Walking Dead aired one of the greatest premiere episodes in TV history back in 2010, followed by two wildly uneven seasons where the writers seemed more interested in wallowing in existential misery than in white-knuckle zombie-killing adventure. But it kept growing in popularity, and by the start of year three in 2012, it had become one of the most-watched shows on television — broadcast or cable — and one of the most reliably entertaining to boot. The fifth season ended on such a creative and Nielsen high that show-runner Scott M. Gimple may have felt emboldened to take some chances with the sixth, in terms of how he parceled-out Kirkman’s story. But the results of those experiments have been mixed. The ratings, while still impressive, trended downward after the mid-season hiatus; and prominent TV critics have grumbled noisily about Gimple’s choices.

There’s enough material in the comics to support at least another two or three seasons (and maybe more, given that Kirkman’s still churning out a new issue every month). But unless Gimple and his staff can re-engage the segment of the audience who feel like these past 16 episodes have jerked them around too much, then the show might keep shedding viewers — especially given that the next stretch of its story moves even further away from the undead monsters who first captured America’s imagination. At its best, this is still an exciting, enjoyably nerve-wracking show. But if the writers can’t stop toying with their fans, then ultimately, who got killed in last night’s episode may not matter as much as how many people will still care enough to tune in for the answer next fall.