There wasn’t a telephone in sight. For the inaugural celebration of the goofy and good-hearted Red Nose Day in America, NBC invited seemingly everyone in Hollywood to hang out at New York City’s own Hammerstein Ballroom for three hours in an attempt to “be funny for money” — and it didn’t require a single participant to awkwardly answer a phone on stage in order to collect donations.

The British import (it was partially conceived of by director Richard Curtis, which means it’s about as British as Love, Actually) brings together big talents for a good cause – helping kids through donations to 12 different charities scattered across the globe – and aims to make everyone laugh to boot. Billed as an “entertainment special,” the television event was essentially a gussied-up telethon, complete with marquee-name talents, live sketches, musical performances, and enough pre-taped material to conceivably launch a very viable Saturday Night Live competitor. And while Red Nose Day offered up a lot of fun for viewers (a Game of Thrones musical courtesy of Coldplay! Martin Short and Billy Eichner harassing people on the street!), those in the live audience witnessed some behind-the-scenes nuttiness as well.

1. A warm-up set from comedian Jessica Kirson
Kirson, a regular on The View and a two-time competitor on Last Comic Standing, was given the relatively thankless task of both warming up and calming down the show’s live audience. She not only had to teach everyone how to applaud appropriately – save the laughs for the funny bits, people, but keep it serious for the dramatic (and, in some cases, traumatic) video packages – but also had to do while also attempting to crack some jokes to keep folks in a festive mood. Not even a brief sneak appearance by co-host Seth Meyers could derail her, and Kirson broke out some classic stand-up tricks (a lot of “Where are you from?” and “What do you do?”) and some choice zingers (“You don’t have to clap…it will never fill the hole”).

2. A series of in-between sets from comedian Ryan Reiss
Sadly, Kirson couldn’t stick around, but the commercial-break downtime was livened up immensely by the charms of Seth Meyers’ own regular warm-up comedian, Ryan Reiss. “That’s the nicest he’s ever looked,” Meyers commented on his employee, who doled out generous dashes of Rob Ford jokes and commentary on his own failed dating exploits. Reiss even made a friend in the audience – an Italian tourist named Tomaso – who probably walked away from the entire experience more than a little bewildered. 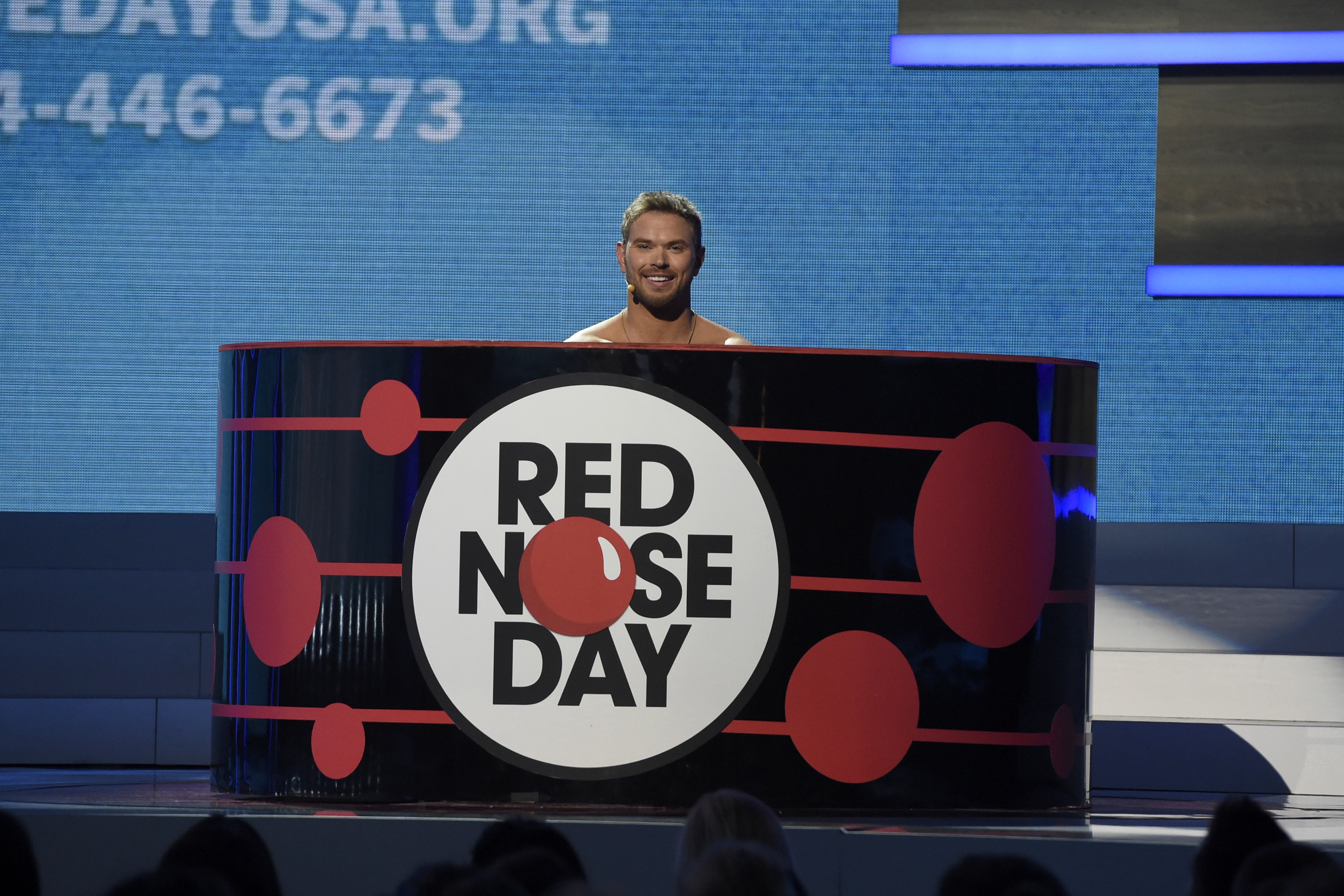 3. Kellan Lutz’s naked gag was even better in person
Lutz took the stage – no, not actually naked, sorry – long before he made it to the air. The actor hid out in his modesty bin for 10 minutes before emerging to a screaming audience (that entire Julia Roberts segment? He was already in there) and promising to reveal all, as long as everyone ponied up enough cash. When he popped out of his teensy confines during the next commercial break, the live audience booed the presence of his shorts and hooted in a way that was, frankly, quite salacious. “He’s just wearing shorts!” a woman behind me exclaimed in disgust, a sentiment many people seemed to share.

4. No one knew what to make of that Gwyneth Paltrow gag
Despite seeing the Goop founder getting strapped into her flying rig with their own eyes, the live audience still let out a collective gasp when she got “stuck” in mid-air. Was it a gag? Had something gone wrong? Was Gwyneth going to be okay? Of course Gwyneth was going to be okay! Still, when it was time to come back to Earth, Paltrow did audibly ask host Meyers, “Did we pull it off?” Oh, too well, Ms. Paltrow, too well. 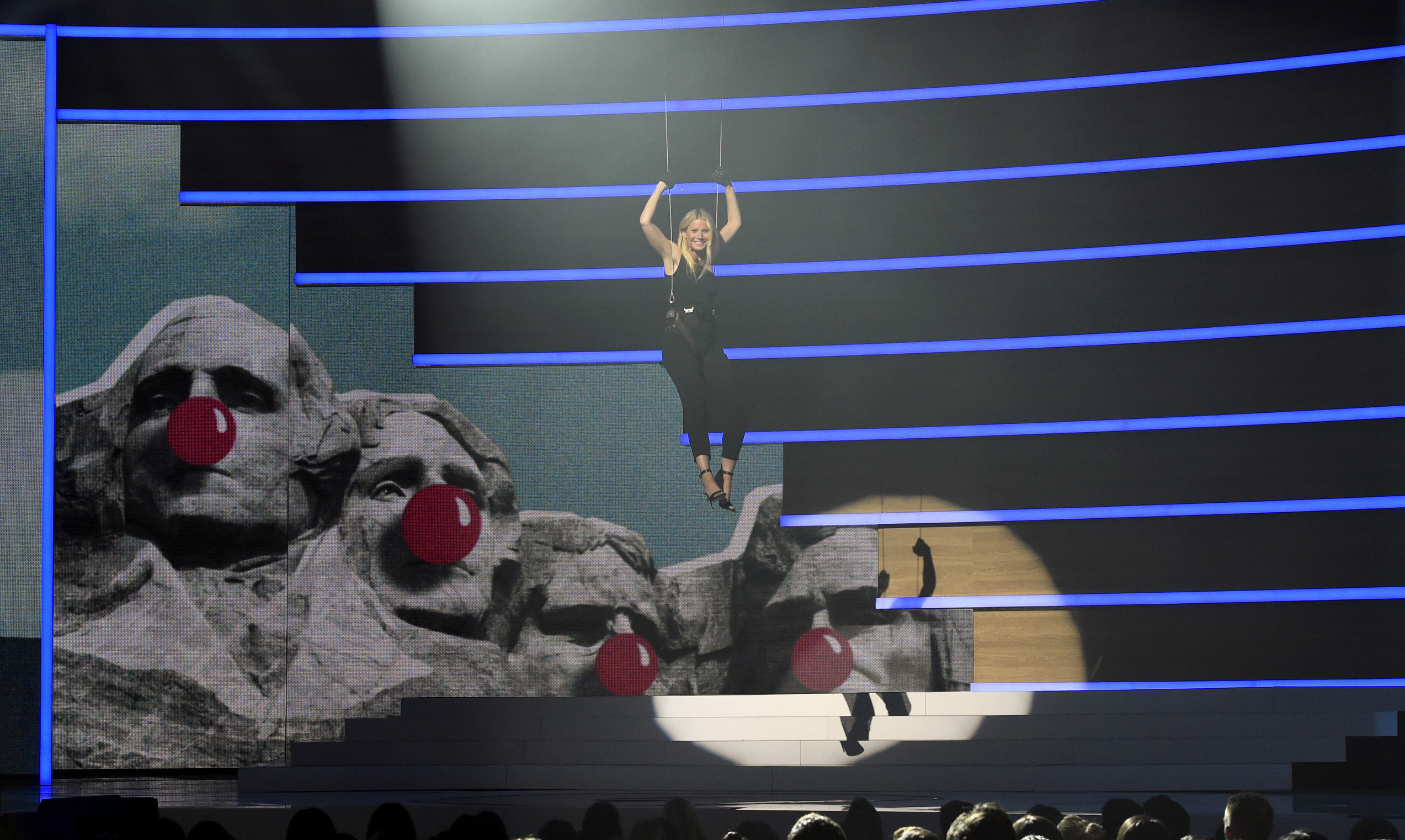 5. Nick Cannon’s entrance was a showstopper
Cannon’s appearance had been teased all show – the man did dance for 24 hours in a row, after all. But nothing could have prepared the crowd for his actual entrance, which was nearly overshadowed by his shockingly still-grooving Red Nose Day Dancers, a booming marching band, and the appearance of the Red and Yellow M&Ms (who, ever-gracious, stayed off to the side while Cannon accepted his very deserved accolades).

6. That John Mellencamp appearance was a total surprise
No one even so much as hinted that there was going to be any kind of surprise during the entirety of the show, let alone the appearance of John Mellencamp in the middle of Keith Urban singing his “Pink Houses” with a giant band on a quickly assembled set-up. That gasp from the audience? That was very real.