Now that its first season has wrapped, FX’s Legion has to go down as the most audacious superhero show that any big-time TV network has ever attempted – which makes sense, given that it featured a character who’s one of the oddest in the history of the X-Men comics. A scarily strong telekinetic mutant, David “Legion” Haller (played by Dan Stevens) has trouble distinguishing between his ability to read minds and the “hearing voices in your head” strain of mental illness. So even in the series’ season finale, when David was doing more straight-ahead do-gooder stuff like floating through the air and projecting psychic force-bolts at his enemies, there was none of the usual adolescent wish-fulfillment. After all: How could an action-adventure ask its audience to cheer for someone that powerful, and that unstable?

Creator Noah Hawley – best-known for brilliantly adapting the Coen brothers’ movie masterpiece Fargo into what’s arguably the best anthology series currently on TV – set himself a tough challenge with this experimental inaugural season, trying to get viewers to see the world through the eyes of someone who couldn’t always trust his own senses. And because of the nature of the hero, it wasn’t always easy to follow exactly what was happening in any given episode. You were never sure what was real, what was a hallucination and what was simply a really great homage to early Seventies British cult films. (If you were lucky, you got a scene that was all three at once.)

'Legion': Everything You Need to Know About Bold New 'X-Men' TV Show

Nevertheless, week after week, Hawley and his writers and directors kept plunging into their man’s subconscious, digging up memories and dreams that gradually pieced together his history as the secret son of Professor Charles Xavier, who’d spent most of his life in and out of institutions because of his inability to control his powers. Meanwhile, outside of David’s skull, a woman named Melanie Bird (Jean Smart) worked with a motley team of mutants at a facility dubbed Summerland, warding off the hostile covert government agency “Division Three.” But this was a series that spent way less time on that external action than on what was popping around in its hero’s head.

What made Legion work? Two things in particular. First off, the performances were consistently stellar. No matter the convolutions of the plot and the backstory, it was always fun to watch Stevens fidget his way through another uncomfortably personal conversation, or to watch Aubrey Plaza roar through another scene as the show’s secret villain, Lenny. For all the finale’s nervous chatter about David’s mental state and whether Homo sapiens and “Homo superior” can ever live in harmony, the actress had the most pointed line in the whole episode which she described her insidious influence in the world as like making soup – then asked, “Ever try to un-make soup?”

Most of the rest of the credit goes to Hawley’s obviously geeky enthusiasm for what he could do with this material. With a style influenced by Stanley Kubrick’s A Clockwork Orange and Brian De Palma’s The Fury, and a story more in line with something by cult comic book writers Grant Morrison and Peter Milligan than anything mainstream, it was like the showrunner was living out his brainy fanboy fantasies. And that’s not even taking account his Pink Floyd obsession, evident in the name of David’s romantic interest, Syd Barrett (an homage to the prog-rock band’s original frontman), and the frequent nods to the images and sounds from The Dark Side of the Moon (including the songs “Breathe” and “On the Run” in the finale).

Even at only eight episodes, Legion occasionally at times seemed a little pokey, perhaps because it mostly ran around in circles inside David’s psyche instead of setting him and his friends off on some big heroic mission. Still, the finale arrived so quickly after the first chapter, there was little time to get bored – not to mention that the constant stream of stimuli and the building of oddball extensions to an already established superhero world left viewers feeling that the surface had barely been scratched. Let that be a lesson to other writers and producers making “prestige TV.” Not every season needs to run 13 hours, or has to dot every “i” and cross every “t.”

Here are five more takeaways from the show’s first season:

Marvel TV shows don’t have to be stodgy
It certainly helped this show’s cause that, right around the point it hit the halfway mark, Netflix debuted Iron Fist, a joyless slog of a series that turned whatever was exciting about the Daredevil/Jessica Jones/Luke Cage “Defenders-verse” into a chore. Legion, on the other hand, practically burst out of the box from the start, looking like a delirious mash-up of midnight movies, a mint edition 1977 copy of Heavy Metal magazine and a mescaline trip. Whatever qualms superhero fans may have had about the show’s emphasis on psychedelic sojourns over good guys beating up bad guys, at least it was unpredictable. Any random minute could bring a Bollywood dance number, a character getting lost inside of an old movie, a journey to astral plane accompanied by a batty dude in a diving helmet … anything, really. 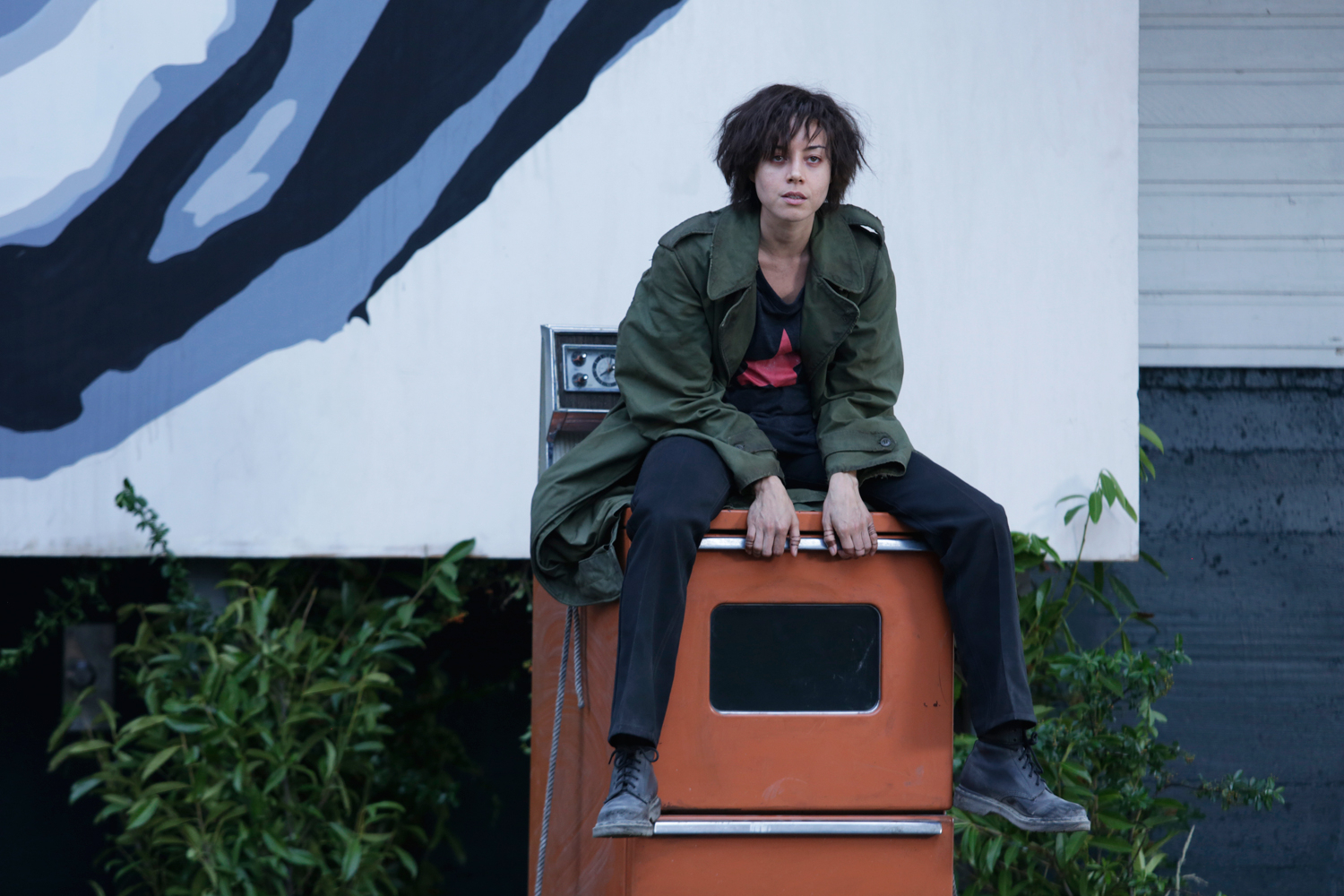 Aubrey Plaza is a rock star
After Plaza’s character Lenny appeared to die in Legion‘s first chapter, the actress popped up in interviews insisting that we hadn’t seen the last of her on the show, warning us that we had no idea what was coming. She wasn’t exaggerating. By the end of the season we’d learned that “Lenny” was in fact a psychic parasite named Amahl Farouk, who’d attached itself to David’s brain when he was a baby and then manifested throughout his life as various hallucinations. Before this “Shadow King” jumped into the head of Melanie’s husband, Oliver, he (or she? or it?) acted as an unfettered chaos agent. This allowed Plaza to try on different guises: from Tim Burton-inspired goth-demon to sleek, sexy, Audrey Hepburn-like cat-dancer. Even at their most confounding, any given Legion episode could be counted on to deliver at least a few scenes of pure entertainment, courtesy of its kookiest character.

But then we shouldn’t have been surprised to see such a high degree of Plaza wonderfulness, because …

Noah Hawley assembles incredible, offbeat casts – and gets the best out of them
Anybody who’d seen Dan Stevens in The Guest already knew the former Downton Abbey star had the charisma and cool to play the perpetually distracted super-mutant title character. (And if you haven’t seen the former movie, a brutal revenge thriller from Adam Wingard … good gracious, remedy that immediately.) But like Hawley’s Fargo, his superhero show surrounded Stevens with a stellar support team: including Fargo‘s Rachel Keller as Syd, deadpan Flight of the Conchords comic Jemaine Clement as Oliver and rubber-limbed performance artist Bill Irwin as Cary, a brilliant scientist with his own freaky mutation. As the season went along, the show spread its action among its ensemble more – and was all the better for it.

Television special effects have come a long way – provided creators know how to use them
FX Productions and Marvel Television undoubtedly poured a lot of money into this show, although all eight episodes combined wouldn’t equal the budget of one Avengers movie. Yet can anyone say the visual effects look any less amazing here than in, say, Ant Man or Doctor Strange? A lot of Legion‘s eye-popping quality can be attributed to the set-design, which made everything on the screen appear just a little bit alien. That funky exoticism allowed the producers to alter reality just with a shift of lighting, or by layering in old-fashioned cinema tricks like superimpositions, jump-cuts, and animation. And when it was time to go big, the digital wizards came through, with the occasional explosive action sequence, and with spectacular images of David moving entire rooms full of debris with his mind. Used sparingly, and handled with care, the most memorable effects in this first season weren’t just sensational. They were beautiful.

It’s set up a second season that should be even wilder
Did you stick around to the actual last minute of the finale? If not, you missed something pretty important. The episode finishes with everyone at Summerland safe for the moment, and the Shadow King headed south, embedded in Oliver’s consciousness. Then, after the credits, there’s one more scene, with David and Syd standing on the upstairs patio, enjoying a moment of tranquility on a moonlit night. Suddenly, out of the blackness, a metal sphere appears, miniaturizes our hero and whooshes off with him trapped inside.

The ratings for this first season may have been lower than FX expected for a Marvel superhero show shepherded by the man behind one of the network’s most popular programs. But now that these first eight episodes are complete – with a beginning, middle and end, and some reasonable explanations for its bizarre excesses – Legion should pick up more of an audience, especially among fans of visionary science-fiction/fantasy. That should build up some excitement for a second season that will kick off with a question: Where the hell did David go?

There are any number of possibilities, from something to do with the mysterious “Equinox” that Division Three mentions at one point to something completely unexpected – perhaps drawn from deep within X-Men lore. And if Hawley keeps following through on his Pink Floyd fandom, the theme of Season Two should already be clear. We’ve just left The Dark Side of the Moon. Wherever David’s zipped off to, he’s probably already thinking, “Wish you were here.”