31 Hours With Charli XCX: An Intimate Look at Her VMAs Debut - Rolling Stone
×
×

No matter where you’ve been this summer – from L.A. to Tokyo – you’ve certainly heard Charli XCX belt out the chorus to Iggy Azalea’s “Fancy.” Now, as the seasons change, her solo “Boom Clap” has become one of the most popular songs in the country and its follow-up, “Break the Rules,” will soon hit radio. This weekend, the 22-year-old promoted all three by appearing at the MTV Video Music Awards and performing during the pre-show — and RS rode along for every moment. From the makeup trailer to the stage and back to the pool at the Standard Hotel, this is how Charli XCX spent her big weekend.

Saturday, 4:20 p.m.: Charli’s trailer outside the Forum
“I’m not nervous right now, but I might be tomorrow,” Charli says, relaxing in her trailer, her pre-show jitters overtaken by jetlag. This time last week, she was performing in Japan, she then quickly jetted to Sacramento and on Wednesday she arrived in Los Angeles to begin VMAs prep. “What kind of snake bit Nicki Minaj’s backup dancer yesterday?” she asks, alluding to the Friday night incident when the rapper’s rehearsal went awry. “A boa constrictor? That’s what I’m afraid of. I’m going to be sitting right next to the stage for that at the show!”

31 Most Outrageous MTV VMAs Moments of All Time

5:10 p.m.: The Red Carpet Stage
This year’s pre-show takes place in the Forum’s parking lot, and a giant sign with Charli’s name looms over the outdoor stage. The timing of Charli’s performance must be perfect because mid-way through she moves off the stage, down to the red carpet and onto another platform where drummers await. During rehearsals, teams of workers are on their hands and knees cleaning the carpet with small brushes, and a small audience is brought in for camera and sound testing purposes. At the same time, planes are constantly roaring overhead. The Forum lies directly under the LAX flight path, but MTV has assured everyone that sound of the audience and music will drown out any distractions that may cause on the day of the show. “Am I even doing anything interesting yet?,” Charli worries. “Right now I’m just sitting on a box.”

7:39 p.m.: In-N-Out
It’s time for dinner, so the rising young pop star heads to one of the hippest, fanciest restaurants in Hollywood: In-N-Out Burger. Asked if this was her first time enjoying California’s most beloved fast food chain, Charli responds, “Are you kidding? No! I love In-N-Out!”

9:26 p.m.: The Avalon Hollywood
After helping her tour manager pick out a new suit for tomorrow’s show, Charli arrives through the back entrance of the Avalon Hollywood for a pre-VMAs performance. VMAs artists are requested by MTV to appear at these shows in order to spread buzz, and once inside, Charli is whisked to a backroom where she gives MTV News a quick interview about tomorrow’s show and her new LP, Sucker. She then does a quick meet and greet with a line of excited fans, a group that includes both well dressed adults and nervous teens.

10:40 p.m.
Minutes before her set, Charli grabs a colorful silk scarf and mixes a cranberry vodka. Once her all-girl band is in place, she runs onstage and greets the barrage of screaming fans. Her 40-minute set includes “Break the Rules” and an energetic and remixed rendition of “Fancy” (sans Iggy) and ends with “Boom Clap.” Once offstage, Charli’s manager congratulates her like a proud dad, and the singer mingles with friends before returning to the swank Standard Hotel. 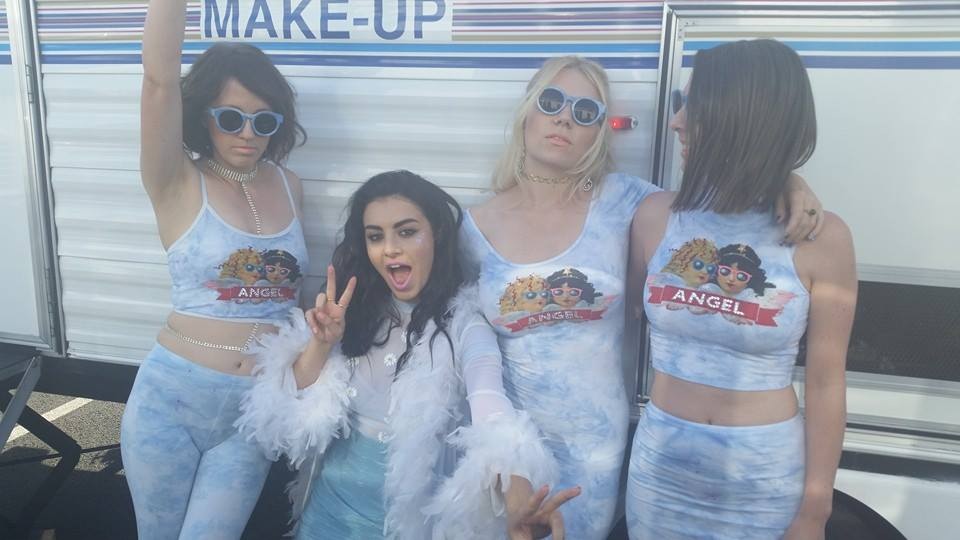 Sunday, 1:13 p.m.: The Forum
After an avocado breakfast and a morning rehearsal, Charli begins getting glammed up before for her big VMAs premiere. With bunches of brushes and various other tools at his disposal, makeup artist Colby Smith begins to work his magic. “The inspiration for today was baby blue clouds,” he explains. “We wanted to do something girly, light and bright, so Charli is going to have some iridescent sparkles on her face.” Glitter, however, was out of the question. Why? “They’re known as the herpes of the fashion world because you can never get rid of them.” On her body, meanwhile, Charli will be wearing tiger-print leotard paired with woolen pants. “I just wanted to clash with the carpet,” she says.

3:50 p.m.
With Charli’s live performance looming, she takes a quick stroll down the red carpet. As fans are screaming all around her, she explains how it feels to be in such an environment: “It’s weird but good. The fans are like ‘Ahh!’ They all sound like they’re being chased by serial killers.” Is it hard to concentrate for interviews during the madness? “Totally, because I always want to know what they’re screaming about. I’m like, did someone just flash the crowd?”

4:30 p.m.
Sam Smith, Charli’s competition in the Artist to Watch category, arrives on the red carpet. “I love Charli,” Smith says. “Me and her grew up in the same town. We went to schools that were next to each other and never knew. It’s a very small world.”

5:30 p.m.
Minutes before her official red carpet performance, Charli is still playing it cool: “I think it’s going to be fine. All the girls I’m performing with look so dope. It’s going to be cool. I’m just worried about if I’m going to fall.” Iggy Azalea, apparently, has done exactly that at one of Saturday night’s pre-shows.

6:00 p.m.
Charli’s performance goes off without a hitch, but she barely has anytime to celebrate: The main show is about to start, so she heads directly to her seats in the auditorium. (The show is live on the East Coast, but doesn’t air for another three hours here in the West.) Once inside, she sits between Azalea and Cher Lloyd. A few seats down is Ariana Grande.

8:00 p.m.
Now that her work is done, Charli thoroughly enjoys the performances, especially Beyoncé’s night-closing run through her self-titled LP. Watching her friend Iggy perform was also a highlight, and even though they didn’t win Video of the Year, she remains all smiles.

8:37 p.m.
After the show, Charli and her team head to her trailer to watch highlights on an MTV feed. This is also the first time they can see how Charli’s earlier performance looked on camera. All are pleased with the results.

9:24 p.m.
Charli and team finally depart the Forum and make the 30-minute drive from Inglewood to the Hollywood Standard. Fortunately, there’s little traffic this time of night.

11:30 p.m.: The Standard
After Charli decompresses in her room, she goes down to the pool to celebrate with friends and colleagues under the Standard’s heat lamps and the starry Los Angeles sky. Team Charli can’t relax for long, though. On Monday, she’s releasing the music video for “Break the Rules” and soon after she’ll begin preparing for her fall headlining tour.