It’s been six months since we last saw our heroic walker-fighting friends, and in that time, we’ve been besieged with the sort of news stories that will likely make the first five minutes of the season premiere even more cringe-worthy than the creators originally thought. Before you dive into Season Five when it premieres on AMC on October 12th, here is a crash course to make sure you’re up to speed.

Warning: If you haven’t watching Season Four yet (and why haven’t you?), do not read this. Spoilers are abound and abundant here. That’s the point of this primer – to catch you up for Season Five. Seriously. If there are still episodes from last season taking up space on your DVR, do not read this.

Also, watch your step with this new season — because that first episode is a real doozy.

10. “Farmer Rick ” is long, long gone; it’s fairly safe to say that he officially died along with Hershel. Now that the Terminus folks have herded everybody into a railroad car, our money is on “Warrior Rick” coming back, dare we say, with a vengeance.

9. There is, potentially, a cure for the zombie apocalypse. It’s in Washington DC, and only the former scientist (or is he?!?) Eugene knows the secret. Ex-Army sergeant/current bad-ass Abraham and his ladyfriend Rosita are determined to bring Eugene to our nation’s capitol so he can save the world.

8. Bad guys kidnapped Beth. We haven’t seen her since right before Daryl caught up with the Claimers Gang and finally reunited with Rick, Michonne, and Carl. 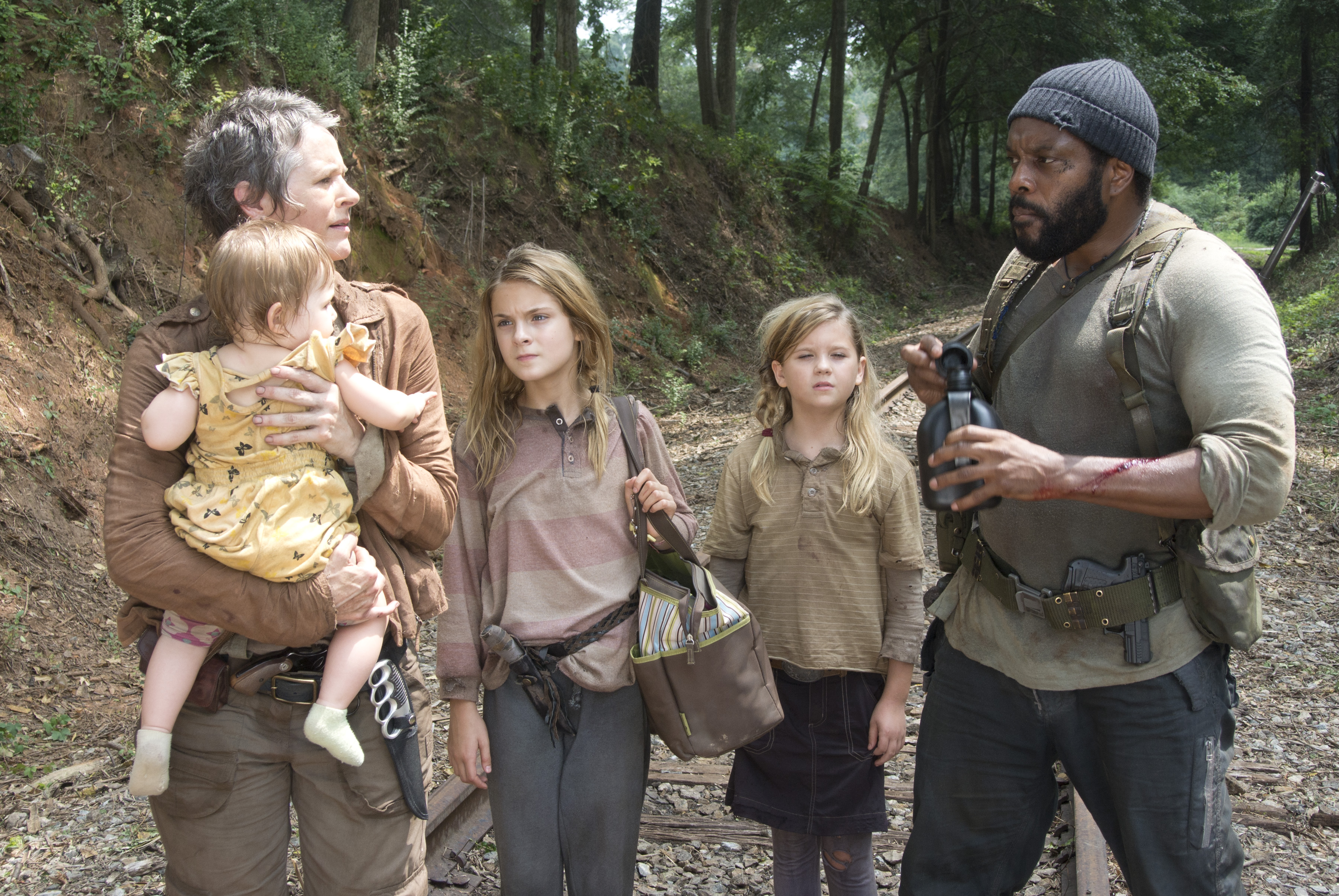 7. Carol and Tyrese are protecting Baby Judith, even if that means they have to murder psychopathic little girls. Carol confessed to Tyrese that she was the one who killed his girlfriend Karen because she was trying to save the rest of the then-prison-population from a deadly disease.

6. Rick does not know that Carol’s gang is alive — he had banished her from the then-prison-population because she murdered two people and set them on fire. You may remember that Rick abandoned Carol with a vehicle and some supplies. He is likely not Carol’s biggest fan.

5. Rick thinks Baby Judith died during the Governor‘s attack on the prison.

4. The prison population divided after the Governor’s attack – Rick, Michonne and Carl formed one group who eventually collided with Daryl. Glenn and Tara merged with Team Cure. Sasha, Maggie, and Bob grouped together in hopes of reuniting with the rest of their friends. Everyone spent the season following signs leading to Terminus, promising sanctuary and community for all.

3. Terminus did not follow through on that promise of sanctuary and community. Instead, it appeared that quite possibly, the Terminusians just wanted to barbecue their fellow humans. They herded our friends into a train car, presumably to fatten them up before it was butchering time. As a reminder, here is who is imprisoned in the boxcar:
From the Prison Gang: Rick, Michonne, Carl, and Daryl. Sasha, Bob, Maggie, and Glenn.
From Team Cure: Abraham, Eugene, Rosita.
From The Governor’s Gang But She’s Not Evil Like He Was: Tara. 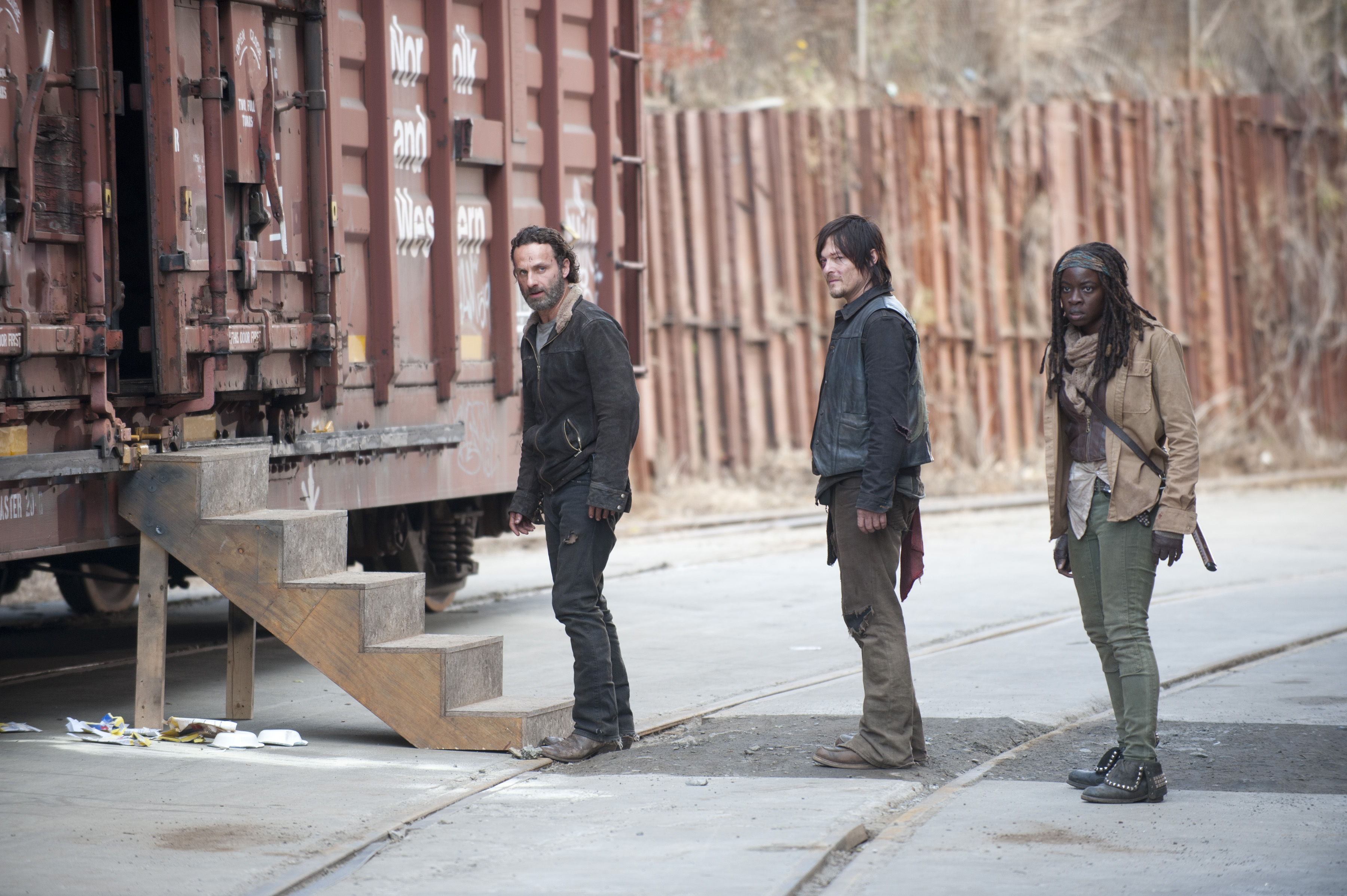 2. Within Terminus, there is a group of leaders, including Mary (whom you may also recognize as Tasha Yar) and Gareth. They’re the ones making the signs leading people to Terminus and they’re also the ones broadcasting a radio message promising hope and salvation. They take things from their prisoners like watches and ponchos and weapons. Terminus is littered with human skeletons and what appears to be a whole slew of boxcars filled with other humans whom we briefly heard crying for help.

1. “Never again. Never Trust. We First, Always” is the motto painted on the walls of the creepy and vaguely religious center of Terminus. What happened to the people of Terminus? Was it always a trap or was it once a true sanctuary? Who are these people and what the hell are they doing? We want answers, people. And we’re about to get them.