Michael Jackson made bigger records than Off the Wall, but he arguably never made a better one — the album’s masterful fusion of funk, disco, pop and Quiet Storm R&B captures the singer at his most effervescent. A deluxe edition of the record arrives February 26th, accompanied by a new documentary, Michael Jackson’s Journey From Motown to Off the Wall, helmed by Spike Lee, who also directed a movie about the 25th anniversary of Bad. From Motown to Off the Wall premiered at Sundance in January, and it airs on Showtime February 5th. In the film, the Weeknd, Pharrell, Questlove, Mark Ronson, John Legend, David Byrne and many other famous artists turn up to discuss Jackson’s importance.

Here are 10 key facts, gleaned from the film, about Jackson’s climb from child star to pop royalty.

The first four Jackson 5 singles all became Number One hits.
The Jackson 5 came out with guns blazing, scoring four consecutive crossover Number One hits: “I Want You Back,” “ABC,” “The Love You Save” and “I’ll Be There.” A parade of stars remember the seminal importance of those early singles in the documentary, and the director Lee Daniels goes so far as to credit them with sparking his entire career: “That’s what motivated me.”

When Epic Records signed the Jackson 5, it was seen as a foolish move.
In the early Seventies, Motown clashed with a number of its biggest artists, notably Marvin Gaye and Stevie Wonder, who were looking to have more personal control over their artistic output. The Jackson 5 went through a similar struggle with Berry Gordy, who ran his label with an iron fist, and the group ended up leaving Motown for Epic Records. (Except for Jermaine, who stayed behind — he was married to Gordy’s daughter.) Gordy refused to surrender the rights to the name “The Jackson 5,” so Michael and Co. morphed into the Jacksons. Despite their previous success, a record executive from Epic suggests that it was “not a popular signing.” “They had a cartoon series,” he notes in the doc. “The credibility was questionable.”

The group’s embrace of Philadelphia soul was crucial to the Jacksons’ evolution.
Most listeners know 11-year-old wunderkind Michael Jackson and world-conquering Thriller-era Michael Jackson, but in a lesser-known transitional phase, the Jacksons headed to Philadelphia to record with Gamble & Huff. This songwriter/producer duo excelled at creating lush, dynamic records that anticipated disco; they worked with the O’Jays, Harold Melvin and the Blues Notes, and Billy Paul. In the movie, Questlove explains, “[The Jacksons] came in as a bubblegum. No one ever graduates from being a cute kids group to being taken seriously.” But with the aid of Gamble & Huff, the Jacksons started on that path.

The keyboardist Greg Phillinganes became Michael and Co.’s secret weapon.
Phillinganes was brought in when the Jacksons were working on their 1978 album, Destiny. At the time, the group was toying with the demo for “Shake Your Body (Down to the Ground).” Phillinganes explains that “there wasn’t much going on rhythmically” in the original recording, so he started tinkering with a new beat to the track. Jackie Jackson remembers thinking, “‘What is this guy doing?’ … I waited until he played it, and when we heard it on the record, I said, ‘Oh, my god, this is the bomb!’ I’d never heard a beat like that before.” Phillinganes was rewarded for his rhythmic acuity: He played on Michael’s big three — Off the Wall, Thriller, Bad — as well as other Jacksons projects.

The Jacksons reveal their ambitions on the initial version of “Shake Your Body (Down to the Ground).”
“There’s a moment in the demo that clearly let me know they had their eyes on a bigger prize,” Questlove notes. “In the background you can hear Jackie say, ‘I can’t wait ’til the Bee Gees hear this shit.'” At the time, it was the height of Saturday Night Fever madness, and the Bee Gees were the biggest group in the world. That would all change in short order.

There is no Off the Wall without The Wiz.
Michael played the Scarecrow in Sidney Lumet’s big-screen adaptation of The Wiz — which also featured Diana Ross, Lena Horne and Richard Pryor — and that’s where the singer first worked with Quincy Jones, who would eventually produce Off the Wall, Thriller and Bad. Rob Cohen, a producer for the film, recalls, “The real night Off the Wall was born, we were doing the pre-recording for the movie. Quincy had tunnel vision on Diana Ross. Finally about 2 a.m., Q had what he wanted from Diana. And he says, ‘OK, Michael, you come in on bar six.’ And Michael comes and just starts at 1,000 watts. He’s doing everything that became the signature Michael.” 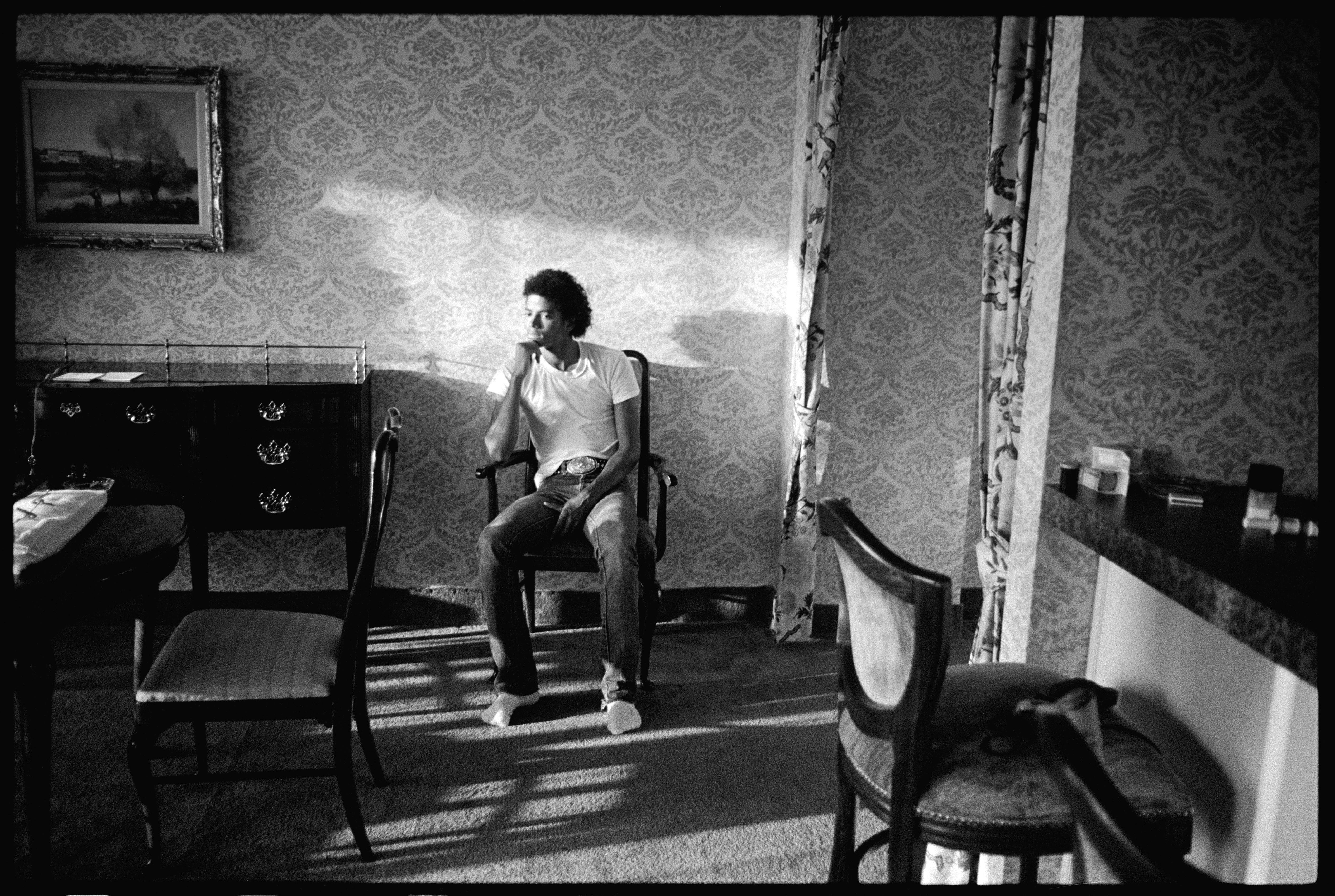 The music of New York City had a big influence on Michael Jackson.
Jackson moved to New York City for a little while to work on The Wiz, and he explored the iconic New York disco club Studio 54. “I’m certain that his experience going to Studio 54 played a big part in where he wanted this album played,” Questlove asserts in the film. Jason King, a professor at NYU’s Clive Davis Institute of Recorded Music, also suggests that Jackson caught wind of early hip-hop in the city, which contributed to his beatboxing on Off the Wall track “Working Day and Night.”

Epic was skeptical about Quincy Jones producing Off the Wall.
When Jackson was ready to make his solo debut, Epic wanted him to work with Maurice White — of Earth, Wind & Fire — or reconnect with Gamble & Huff, proven R&B hitmakers. They were not excited by Quincy Jones. “They didn’t think he could make a contemporary hit record that everybody in the world would like,” a former executive suggests. He was “too jazzy.” But Jackson fought for Jones and ended up getting his way.

An English writer contributed three Off the Wall highlights.
The last third of the film is a deep dive into Off the Wall, breaking down each of the record’s 10 tracks. Three of those were written by Rod Temperton, an Englishman who was living in Germany at the time and developed a keen appreciation for American music through U.S. soldiers stationed in the country. His contributions include two of the finest tracks in Jackson’s entire catalogue, “Rock With You” and “Off the Wall.” Mark Ronson enthuses about the latter at great length, especially the song’s intro, which he likens to “slightly proggy fusion.” “It’s an unconventional start for a disco record,” he continues. “It starts on the off beats. It has that weird vocal thing.”

“She’s Out of My Life” was originally intended for Frank Sinatra.
Tom Bahler wrote “She’s Out of My Life,” the lone tragic ballad on Off the Wall. When he first played it over the phone for Quincy Jones, Jones made him replay the song eight times. But at the time, the track was committed to Sinatra. “Sinatra will do it anyway,” Jones told Bahler. “If you trust me, I promise you an unforgettable recording of this song.” It took a few years, but Jones kept his vow. Every time Jackson sang the track in the studio, he burst into tears, so you can hear that break down on the recording. “There’s nothing on Thriller that tops it,” L.A. Reid says. Many singers have covered the tune, though Sinatra did not end up recording it.