Ah, Christmas: It’s a time of year for peace, love, and pop-culture artifacts that cash in on people’s willingness to watch, buy, or listen to anything remotely Christmas-related — which explains Lifetime’s latest made-for-TV movie/pop trend cash-in, Grumpy Cat’s Worst Christmas Ever. One of the Internet’s most famous and profitable memes, the sour-faced kitty (given name: Tardar Sauce) stars as a curmudgeonly talking feline voiced by Parks and Recreation star Aubrey Plaza. It’s ostensibly a caper-cum-heartwarming holiday story; alas, it doesn’t hit either of those marks, and is instead an occasionally entertaining, mostly befuddling mess of a movie.

Here are 10 of the takeaways we got from watching Grumpy Cat in action.

1. If you’re an Internet sensation, people will try and cash in.
Much of the credit for Grumpy Cat’s swift rise to Internet stardom goes to her “meme manager,” Ben Lashes (credited here as a co-executive producer). After a photo of Grumpy’s adorable scowl blew up on Reddit, Lashes started working with the family that owns her, and the rest — Grumpy Cat-branded tees, books, coffee drinks, and this movie — is history. In 2013, New York reported that Grumpy Cat Ltd. was worth about $1 million, and the cat-as-brand has remained extremely valuable, particularly in the currency of the Internet (#WorstChristmasEver was trending nationally on Twitter within the film’s first half hour). Grumpy Cat’s Worst Christmas Ever may be an easy grab for cash, but it’s also likely to be a successful one.

2. There is such a thing as being too meta.
The movie begins with Plaza-as-Grumpy deadpanning, “You don’t have to watch [the movie]…but I know you’re going to.” And the self-deprecation continues from there: There are winking references to making Grumpy the “most famous Internet meme” of all time and appearances from fellow Internet-famous felines Keyboard Cat and Nyan Cat — both of whom, conveniently, are also repped by Lashes.

And then there’s this: 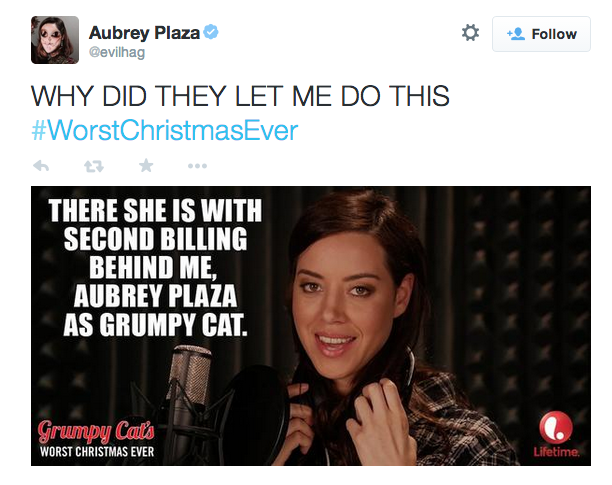 It’s like the producers wanted to show how in on the joke they are, but the constant breaking of the fourth wall comes off as cynical rather than knowing and funny. (The constant exhortations to buy Grumpy Cat products or to tweet about the movie — using, yes, #WhyAmIWatchingThis — don’t really help.)

3. Grumpy Cat is either an extremely patient, or an extremely tired, kitty.
Although Grumpy spends most of her time on screen sitting and scowling, the lady has her moments: She drives a car à la Toonces the Driving Cat, gets dressed up in elaborate costumes, and is made to dance around to Christmas carols. (Leading Plaza to mutter, “Please…stop…making me dance.”) Cat owners know that most felines won’t submit to even one of those things without putting up a claws-out fight, so Grumpy’s “willingness” speaks to either her remarkable patience — or, more likely, that she’s just tired and truly does want people to just leave her alone.

4. Aubrey Plaza has no problem getting into a misanthropic mindset regardless of a character’s species.
It’s an obvious pairing: Plaza is best known for playing sardonic, misanthropic April Ludgate on Parks and Recreation; Grumpy Cat is best known for, well, being a grumpy-faced cat. It’s not much of a stretch for the actor to give voice to the meme, and Plaza has fun with the role. She apparently improvised many of Grumpy’s lines after the movie was already filmed, and the result is like the bizarre hybrid of a schlocky holiday flick and a lesser Mystery Science Theater 3000 episode. Thanks to her, the movie has its moments, though we’ll be glad to see Plaza break free from the grouchy roles at some point.

5. Don’t try to stuff too many different storylines into one Internt-meme feline-centric movie.
The movie revolves around a lonely 12-year-old girl named Chyrstal (Meghan Charpentier) who, over the course of one night in a shopping mall, melts Grumpy Cat’s cold heart and befriends the cantankerous cat. But there are about five different plots crammed into the hour-and-a-half-long flick: There’s the teenager who isn’t accepted and finds a friend in an unlikely place; there’s a love story between Chyrstal’s newly-divorced mom (Shauna Johannesen) and a random dude who plays one of the mall Santa’s elves (Casey Manderson); oh, and did we mention the million-dollar dognapping, or the buttoned-up shop owner who needs a plucky teen’s help to keep his store open? There’s even a hapless mall cop who — dun-dun-DUN! — isn’t what he seems. There’s a lot going on here, and the result is a movie that feels completely incoherent.

6. If your plot doesn’t make a ton of sense, make up for it by going weird.
Though you should be forewarned that including such incoherence will lead to some totally odd scenes. At one point, Grumpy imagines what would happen if the pet store she lives at closes: She becomes a street cat who is eventually…euthanized? Wait, what? Yeah, the movie goes there, and it’s as bizarre as it sounds. There are other one-liners that are absolutely jarring in the context of the movie, too: Toward the end, when Chyrstal’s mom asks if the bad guys hurt her, Plaza jokes, “That’s a different kind of Lifetime movie…if you know what I mean.” There’s poking fun at yourself, and there’s being self-referentially WTF to a fault. Guess which one describes this movie?

7. Despite the title, this isn’t much of a Christmas movie.
Lifetime’s devotion to all things Christmas is so great that the channel has created no fewer than two dozen themed films for the holiday season — there’s 12 Men of Christmas, Single Santa Seeks Mrs. Claus, The Santa Con, and the list goes on, and on, and on. They present an opportunity to see B-list actors (is that you, Dave Coulier?) deliver gloriously cheesy lines against a holiday-themed backdrop, which is fun in its own way. Like those movies, Worst Christmas Ever takes place during the Yuletide season, but aside from Plaza, the cast is made up of little-known Canadian actors, and little of the plot has anything to do with the holiday itself. It’s less a Lifetime Christmas movie than a movie that happens to take place during the the 25th of December that happened to air on Lifetime.

8. It helps if your bad guys are remotely scary.
One of the subplots involves the heist of a dog valued at $1 million dollars from the pet store where Grumpy Cat lives. The criminals behind the caper have rock-star aspirations, which we know because one has long hair and a Steven Tyler-esque affinity for scarves, while the other wears a leather jacket and eyeliner. (So edgy!) They’re not just amateurish; they’re completely non-threatening, like Home Alone‘s Wet Bandits but without the undercurrent of menace (all apologies to Daniel Stern and Joe Pesci). The requisite third-act plot twist reveals a third accomplice, but he’s as harmless as the rocker bros.

9. Joking about product placement doesn’t make said product placement any better.
Even though the mall in which the story takes place is referred to as a “soul-sucking bastion of consumerism,” the producers didn’t miss an opportunity to shove references to Grumpy Cat merch into the movie. The first comes not even 10 minutes in (buy Grumpy Cat T-shirts!), and a couple more follow. Ha ha, isn’t this funny, us poking fun at how much we want you to buy stuff? Not really — it’s more of a reminder of how crass this whole enterprise is to begin with.

10. If you talk to cats, people will think you’re crazy.
In the movie, Chyrstal is the only person who can hear Grumpy speak; even though this ultimately helps her outsmart the bad guys, she still gets teased about having an imaginary friend. The lesson: If you can hear a cat talking to you — particularly a very famous, slightly misanthropic Internet cat — it’s probably best to keep it to yourself.