Who, exactly, was clamoring for a biopic about the origins and backstory of Full House, the ABC sitcom that garnered huge ratings, spawned catchphrases, and introduced the world to the Olsen twins? It’s entirely possible that the movie was greenlit in reaction to the news that Fuller House, a continuation of the series focusing on eldest daughter D.J. Tanner (Candace Camerone Bur), will premiere on Netflix in 2016. Or it’s possible that, after the success of The Unauthorized Saved By the Bell Story, Lifetime sensed an opportunity to keep the nostalgia-fueled train going. But whatever the reason, here we are: Bring on the Uncle Jesse dirt.

Unlike Saved By the Bell, however, no cast members have written juicy tell-alls, and 20 years after the show went off the air, the actors seem to genuinely like each other. Any particularly sensational stories — such as Jodie “Stephanie” Sweetin’s drug and alcohol addiction — happened after the series aired, and mercifully aren’t addressed in Lifetime’s version of the story. (Ditto the whole Dave Coulier-Alanis Morissette thing, in case you’re curious.)

10 Most Brilliantly Lifetime-Gasmic Moments in 'A Deadly Adoption'

So what did make it in? Surprisingly, plenty of actually true moments — along with some seriously cornball lines and plenty of fart jokes. Here are 10 of best worst — and the most “WTF did I just watch?!?” — moments.

1. Lifetime apparently wasn’t allowed to use anything that remotely resembled the real Full House in the film.
That’s the only explanation for why the the “house” looks nothing like the sitcom’s actual set, or why none of the show’s best-known catchphrases — “You got it, dude!” or “Have mercy!” — are uttered. You won’t hear the theme song, written by veteran TV tune scribe Jesse Frederick, either, but that’s less surprising.

2. Dave Coulier almost appeared on Saturday Night Live.
This is actually true: Coulier was cast on SNL, but was let go before he could even start because his comedy stylings were too close to those of Dana Carvey. (Think about it: That could’ve been Ranger Joe yelling “Live From New York!” instead of the Church Lady.)

3. Continuity was not a big concern to the movie’s producers.
Everything from John Stamos’ hair to the clothes cast members wore in certain episodes is off, to a degree that’s genuinely distracting. Worse, the actors playing the Olsen twins, who were babies when the show premiered, first appear as toddlers. They stay that age for the first half of the movie, even as their production company, Dualstar, is founded; in real life, that happened when they were six. Oh, and One World Trade Center appears on the New York City skyline in a shot that’s meant to be from 1997. Good job, producers.

4. Bob Saget wasn’t the first choice for Danny Tanner.
Originally, series creator Jeff Franklin had cast John Posey, an actor whose sole pre-Full House credit was in the movie Manhunter, in the role of Danny Tanner; they even shot the pilot with him as the doting dad. In the movie, Saget is one of the producers’ top choices for the role, but he’s dismissive of the show’s family-friendly content. Eventually he decides to take the role and Posey gets cut from the series. (Fun fact: A version of the opening credits with Posey as Tanner does exist. Thanks, Internet!) 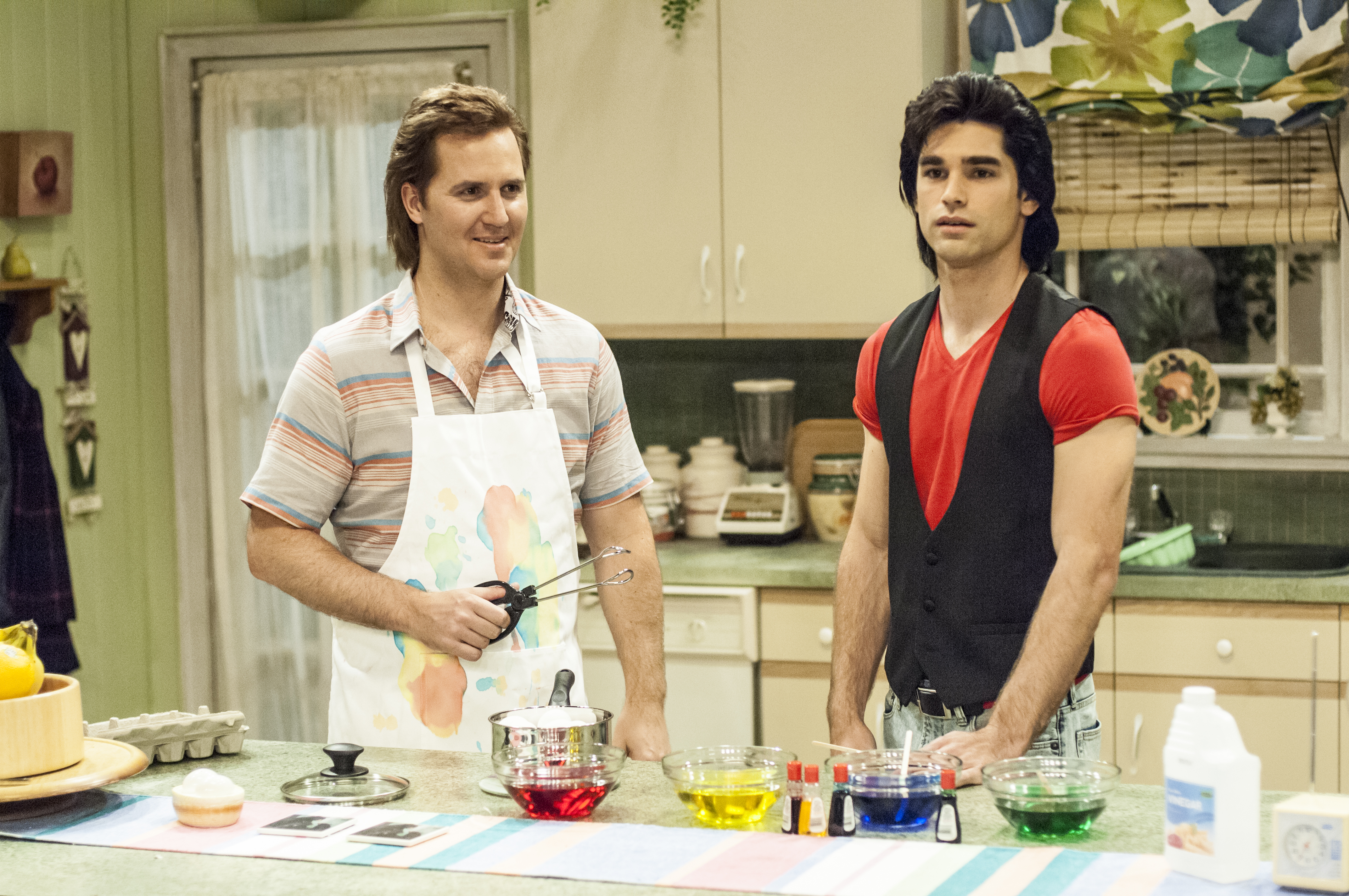 5. Saget was also apparently kind of a jerk.
Much of the film’s conflict — if you can even call it that — comes from Saget chafing at what he calls the show’s “idiotic” humor, meant to appeal to middle America rather than the comedy-club crowds he was used to. He makes stripper jokes in front of the kids, manhandles a mannequin, and namechecks the work of Richard Pryor and George Carlin as the opposite to the sitcom’s family-friendly jokes. It’s no secret that Saget isn’t the same as Danny Tanner — his recent memoir, Dirty Daddy, goes into those differences in filthy detail — but it seems unlikely that he’s the whiny ass we see on screen here.

6. Dave Coulier farted on set. A lot.
What do you expect from the guy who’s best known for impersonating cartoon characters? (This is also very much true, even garnering a mention in a 1993 Entertainment Weekly profile about the series.) The movie takes this one step further, with the final scene at Cameron’s wedding ending on a poignant note…that’s immediately ruined when Coulier farts. How rude!

7. Jam sessions with Jesse and the Rippers were apparently quite common on set.
Two of the movie’s more WTF moments revolve around full-cast sing-alongs, led by Stamos and the members of his TV band, the Rippers. And of course, they always managed to happen exactly when Saget needed a moment of clarity: The first, to Kool and the Gang’s “Celebration,” happens as the show is picking up steam in the ratings; the second, to Bob Dylan’s “Knockin’ On Heaven’s Door,” takes place right after Saget’s sister, Gay, dies at the age of 42. Yes, it’s as utterly ridiculous as it sounds. (And no Beach Boys songs? Apparently they didn’t want to be involved, either.)

8. The men did whippits on set once.
Again, surprisingly true: A bout of boredom on-set once led to Stamos, Coulier, and Saget to indulge in a juvenile form of getting high, according to the latter’s memoir.

9. Dave Coulier introduced Candace Cameron to her husband at a hockey game.
Another hard fact: Coulier, a Canadian (which explains the hockey), was playing in a charity match with Valeri Bure, a Russian NHL player; Cameron attended with the rest of the Full House cast, met Bure at the game, and the rest was history.

10. The dialogue. Oh, the dialogue!
It vacillates between overly cheesy and really gross, with the older actors, particularly the poor guy playing Saget, getting most of the awful lines. He’s forced to make jokes about his wife’s breasts after said wife has an emergency C-section, and at one point refers to himself as a “sexual athlete.” Just…no. And the other actors aren’t spared: At one point, Coulier, who is feeling down after his divorce, says, “Wouldn’t it be great if life were more like Full House?” Not if it were like this.