It’s pointless to level any of the normal criticisms of award shows — the celebrity gawking, the bizarre writing for the bits, the artificial nature of the prizes themselves — at the MTV Movie Awards. They’re devoted to celebrating big-budget blockbusters, broad performances, and CGI spectacle — the kind of movies that, say, the Oscars might sneer at. (Unless you’re Fury Road. But we digress.) That populist leaning was on full display at the 25th edition of the channel’s golden-popcorn affair, stringing together a series of movie-star guest appearances and plugs for upcoming franchise installments, including the Harry Potter spinoff Fantastic Beasts and Where to Find Them, Marvel’s Captain America: Civil War, and, especially, the all-star villain extravaganza Suicide Squad. (Bonus points for Jared Leto’s throwback, glam-rock leather jacket and mention of anal beads. The Joker, indeed.)

Still, that emphasis just means you have to watch the ceremony specifically as entertainment, rather than something that pretends to award objective artistic “excellence.” With that in mind, here are the 10 best, worst and WTF moments of the 2016 MTV Movie Awards.

BEST: The hosts’ Mad Max entrance
Hilariously mismatched hosts Kevin Hart and Dwayne Johnson had a fantastic introduction to the ceremony, entering the Warner Brothers’ lot in full Mad Max: Fury Road mode. Hart was strapped to a car and wearing Max’s metal-muzzle face mask, while Johnson played the role of the Doof Warrior, complete with flaming guitar. Also, there was an entourage of war boys, providing backup for the entirety of the ceremony. It was a perfect choice for the show’s opening homage — a massive, spectacular, entertaining, and smart blockbuster. Best of all, the pre-taped awards took the opportunity to cut to Charlize Theron, gleefully grinning from the audience. It was on fire. 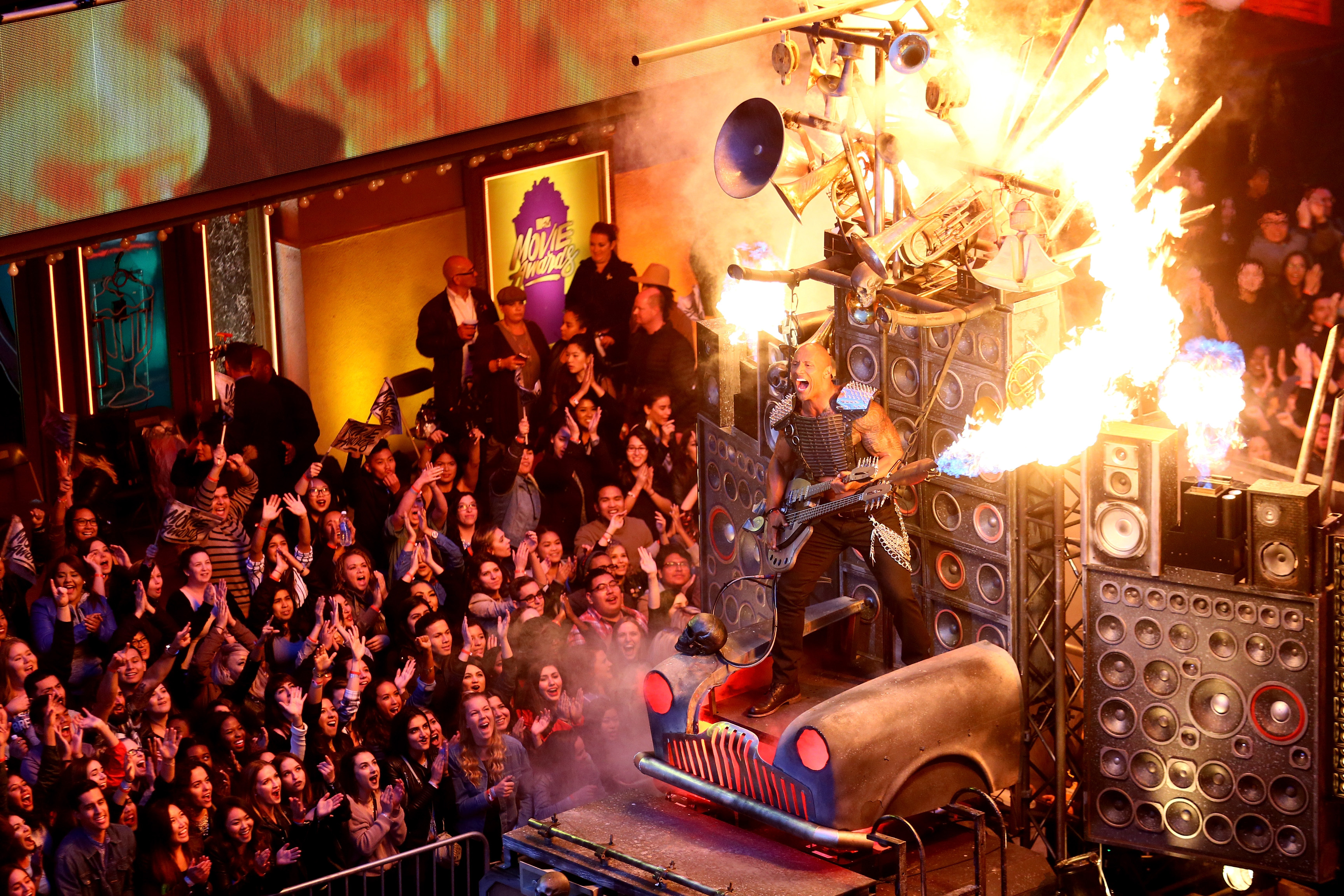 WORST: #DickinCake
There was bound to be a bit of a letdown after that epic entrance. Hart and Johnson kicked off the awards by teasing each other about what they were doing in 1992, when the MTV Movie Awards started. After showing off that photo of Johnson with a fade, turtleneck, chain, and fanny pack, Hart tried to take it in turn with a photo of himself as a hyper, pantsless kid holding a cake. This, naturally, became the focus of a series of lame sex jokes. Did you see American Pie, Kevin Hart asks? Yeah, it was like that, but with cake. Not only is simply saying a food item in conjunction with a dick not enough for a good joke, Hart also tossed off #DickinCake, and claimed it would be immediately trending. If you’re going to try to force a hashtag, at least put some work into it. 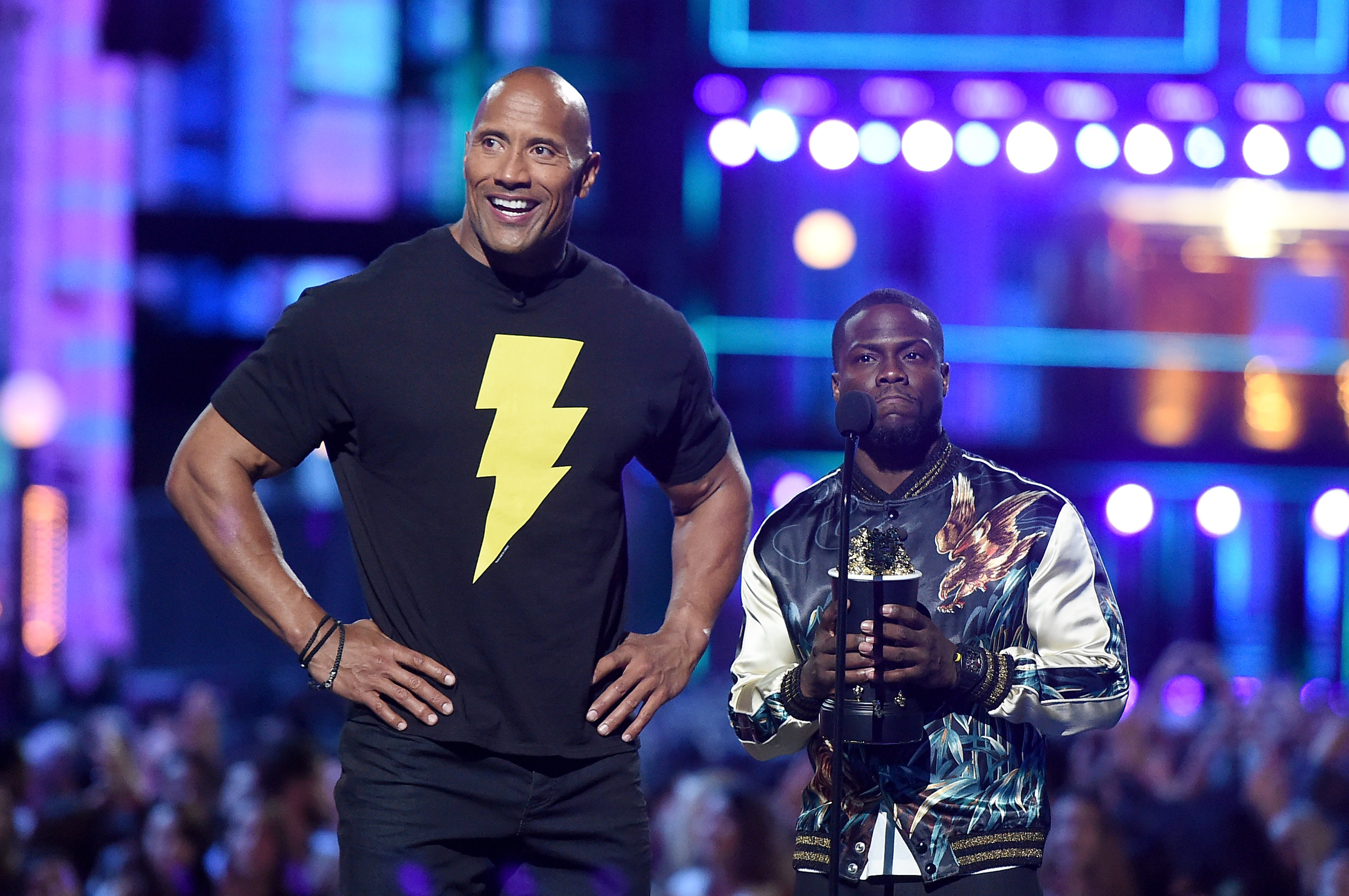 BEST: Key and Peele’s invisible cat
It’s nice to see Key and Peele together in any context now that their Comedy Central show has formally come to an end, especially as a way of shaking off Miles Teller’s creepy vibes (see below). Peele spent their time on-stage pretending to hold the title kitten from their upcoming movie Keanu, an action-packed comedy complete a streetwise Will Forte, gangsters, shoot-outs and with cats (or, at least, one cat). “They’re gonna add it in post,” Jordan Peele asserted, in a funny, effective tie-in with the award they were actually presenting, for Best Virtual Performance, before handing off the “pet” to Keegan-Michael Key. Bring on the invisible felines. 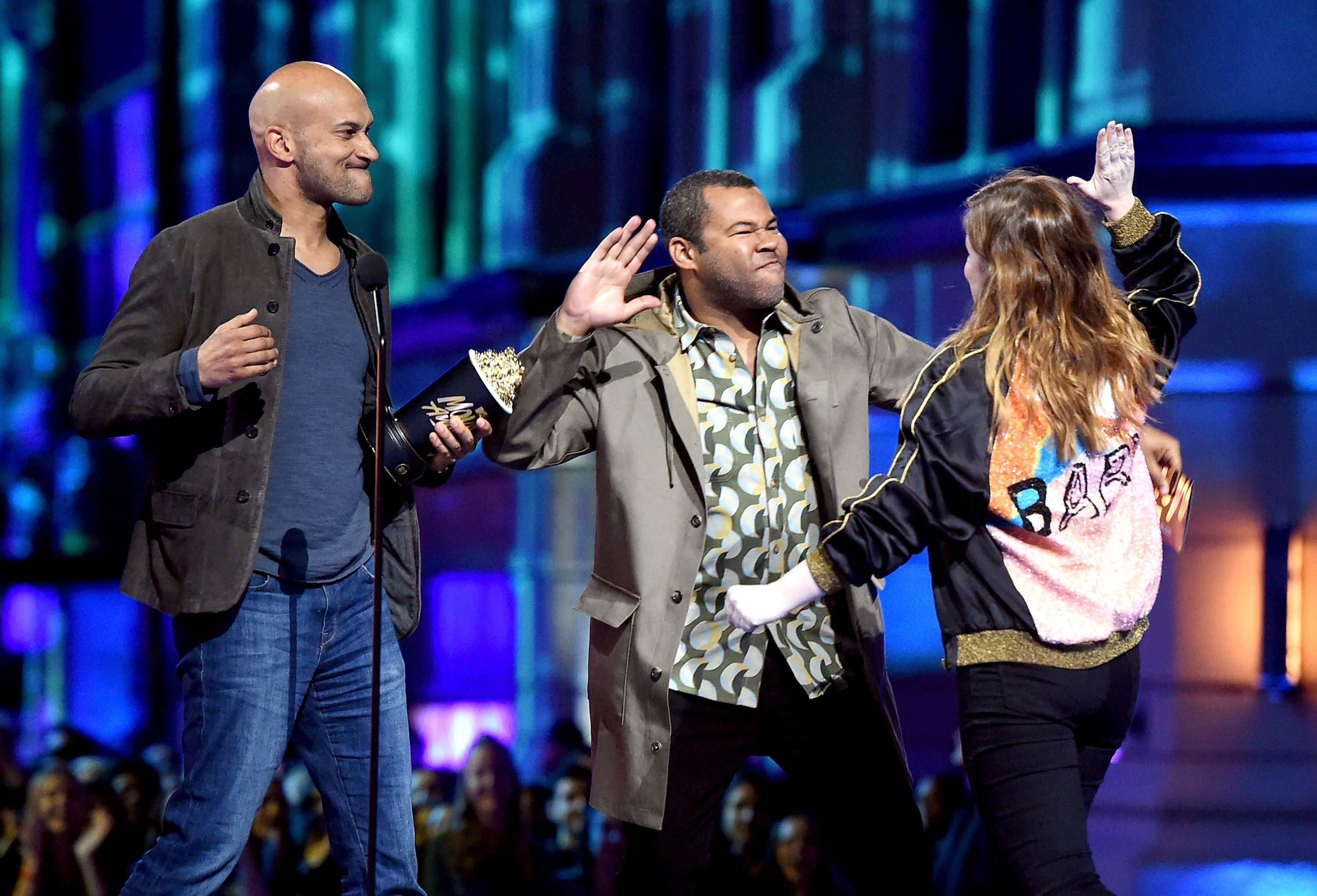 WORST: Miles Teller insists he’s a gentleman
Well, everything about this is just awful. Asking Teller to present “Best Female Performance” seems like the setup of a bad jokes … which it was. The actor not only looked vaguely bemused and pained to even be there, he also attempted to explain his presence by claiming that, as a “gentleman,” he would give awards out to the ladies’ first. Blech. The faux-chivalric underpinnings of this might have sounded self-aware and charming coming out of someone else’s mouth (like, say, Johnson), but here it’s just icky. It didn’t help that Teller was totally outclassed by actual award winner Charlize Theron, who dedicated her speech to her daughter and “All the Furiosas.” 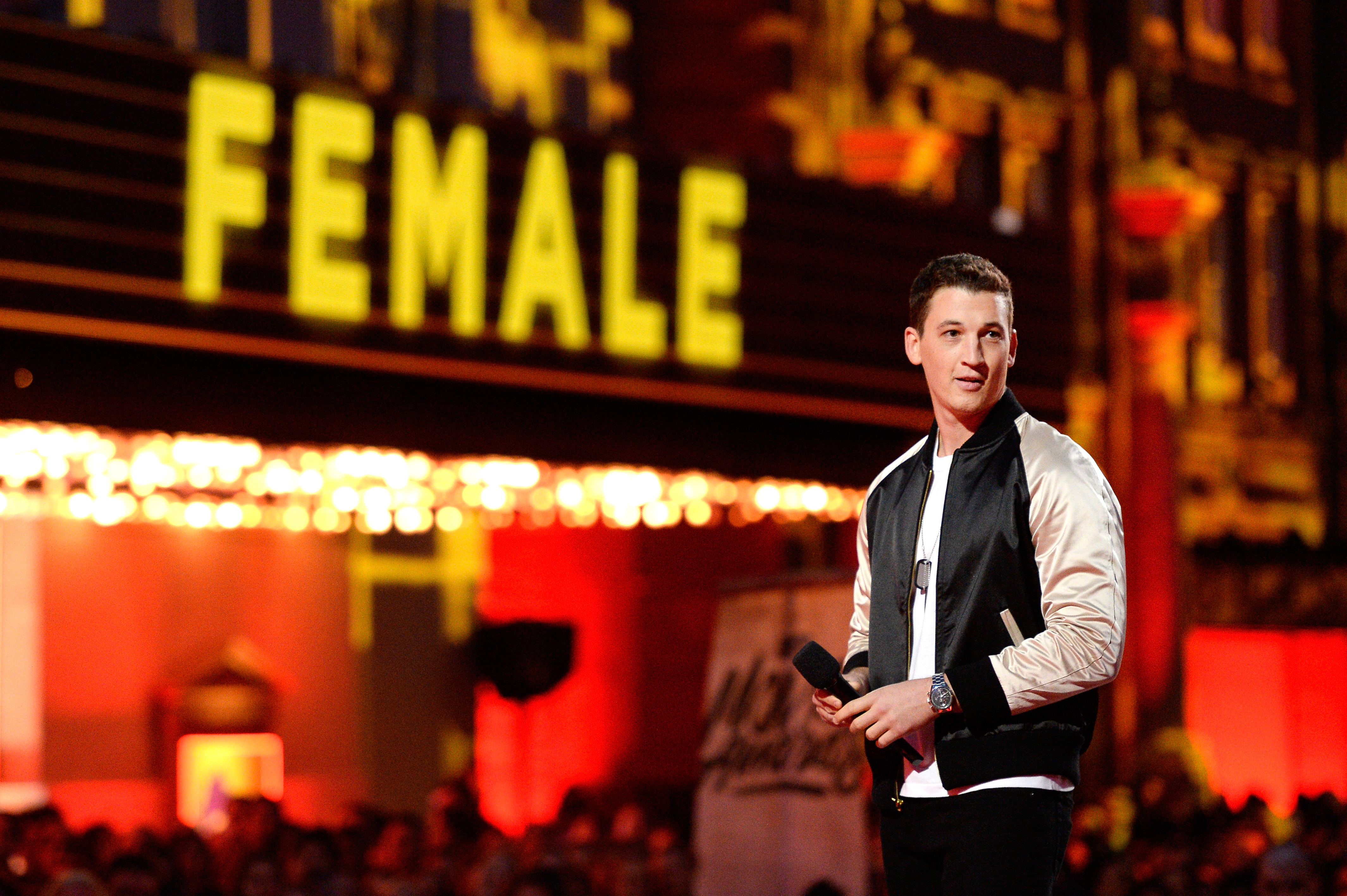 BEST: Amy Poehler’s acceptance speech
Accepting Best Virtual Performance for her turn as Joy in Inside Out, Poehler was the only person on stage wearing a Mickey Mouse shirt, and had perhaps the most memorable normal outfit of the evening (except for Alexander Skarsgard, who wasn’t wearing pants). It was also the ninth anniversary of the first day Parks and Recreation aired, so she shouted out to her P&R co-star Chris Pratt (who won Best Male Performance for Jurassic World) in one of the sweeter moments of the night. Best of all, Poehler wasn’t even sure how the awards were given out, asking whether anyone even voted for her to win — a question that might have been obnoxious coming from someone else, but here was just another part of her disarming charm. 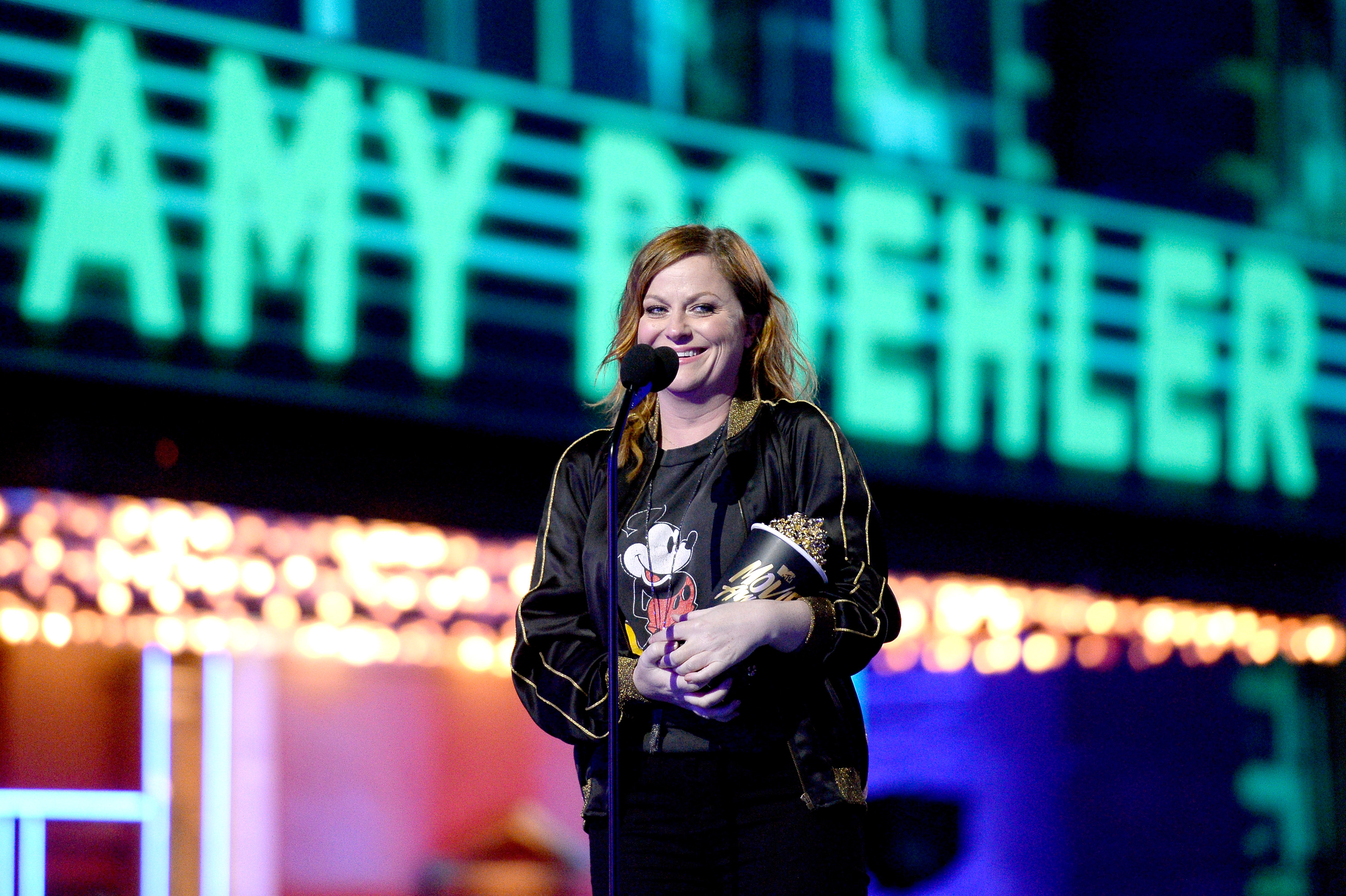 WORST: An entire song about Leo and the bear
The Revenant is an easy target for mockery, but pushing the joke about Leonardo DiCaprio having sex with a bear feels a little played out by now. (If it was ever funny to begin with.) But, perhaps because Leo himself wasn’t in attendance at the ceremony, Hart and Johnson decided to just push ahead with the parody, doing an entire musical number asking viewers where they were when Leo was, uh, sexually assaulted by a bear. Not even the hosts’ considerable comic gifts or a group of backup dancers dressed in bear costumes could do anything to elevate this premise. When a brief interjection from Adam DeVine is the only good part of your rap song, you know you’ve done something horribly wrong. 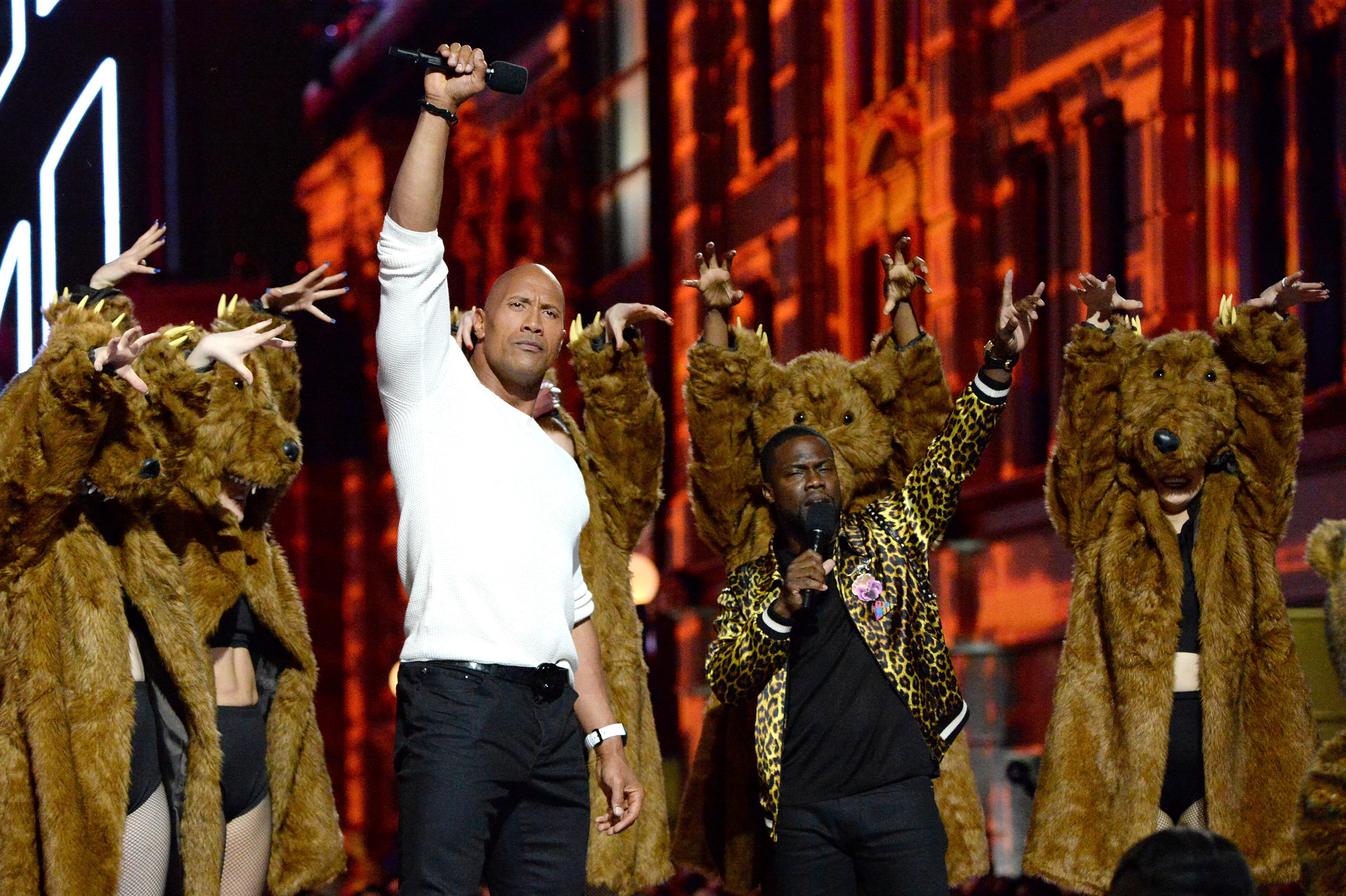 BEST: The Lonely Island’s jiggy Will Smith Tribute
There were three different introductions for Generations Award winner Will Smith, though the best was easily the Lonely Island’s performance of a full Will Smith medley — “Parents Just Don’t Understand,” the theme from The Fresh Prince of Bel Air, “Summertime,” the Men in Black theme (with Men in Black dancers), and, of course, “Gettin’ Jiggy Wit It.” The comedy rap group, clad in heavily-patterned Nineties clothing and overalls, moved effortlessly through each song, putting the Revenant parody to shame. It was goofy, sure, but they were also genuinely having fun.

WORST: That wooden Will Smith supercut
The Lonely Island’s adorable walk through Smith’s career was almost totally undercut by a hey-remember-all-these-roles? supercut — the first 30 seconds of exclusively highlighted scenes in which Smith is making the exact same acting face. Few performers can avoid replicating certain expressions to convey the same emotions (see also: Claire Danes’ crying face) but putting all of those together just feels mean and unflattering. More like Will, Robot, amirite? 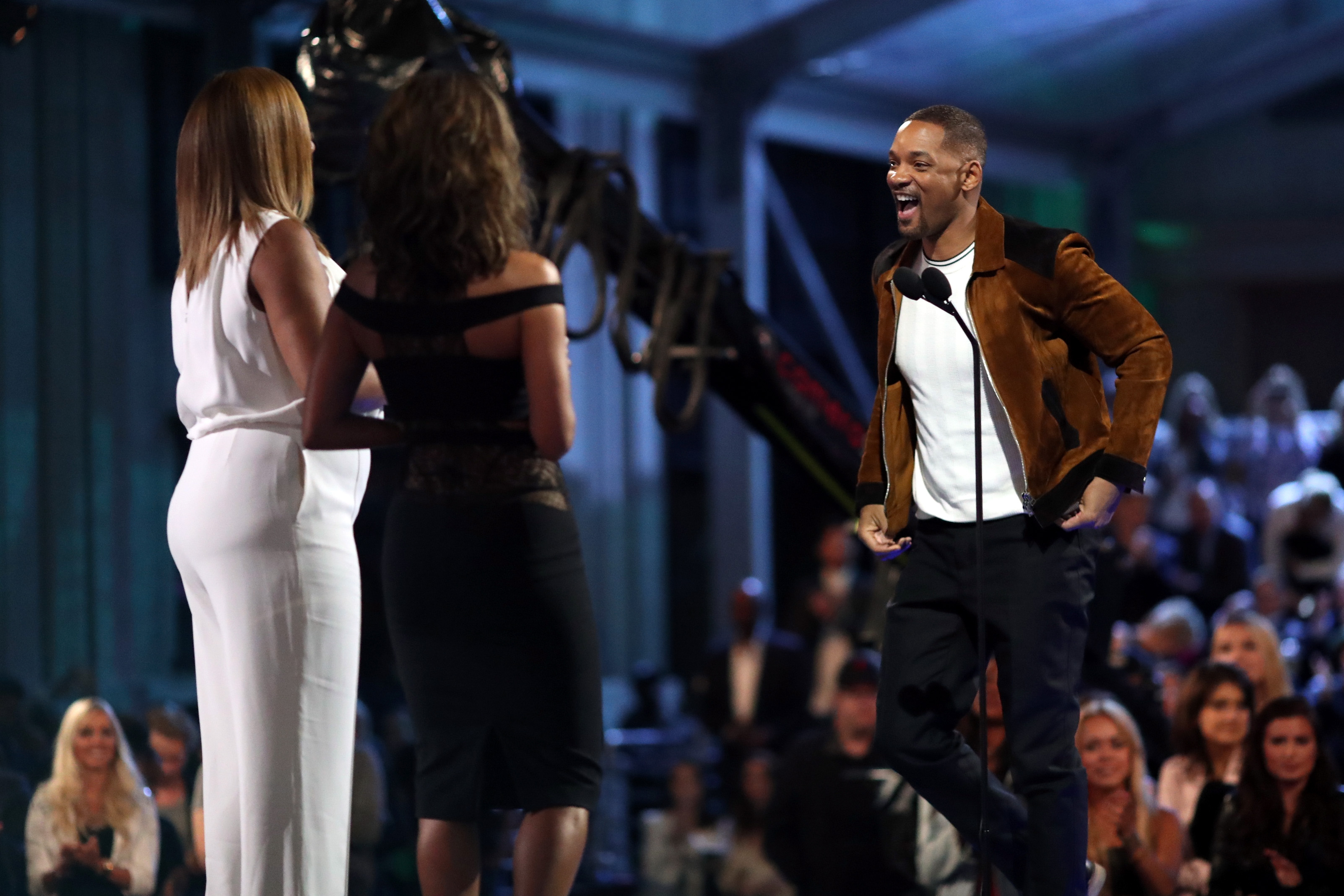 BEST: Zac Efron apologizing to Seth Rogen’s balls
The stars of Neighbors have great chemistry, and in one of the best introductions of the night. Rogen showed up in a bodysuit, bulging with fake muscles. Why? Because Hollywood is full of successful, good-looking actors who can pull off comedy, a sorry state of affairs that ostensibly drove the slightly schlubbier, less attractive Rogen to steroid abuse. Efron’s forced apology to his co-star’s shriveled testicles was tender (sorry), funny, and all around an excellent awards moment. And for some reason, Rogen perpetually referring to Efron as “Zachary” was just hilarious. 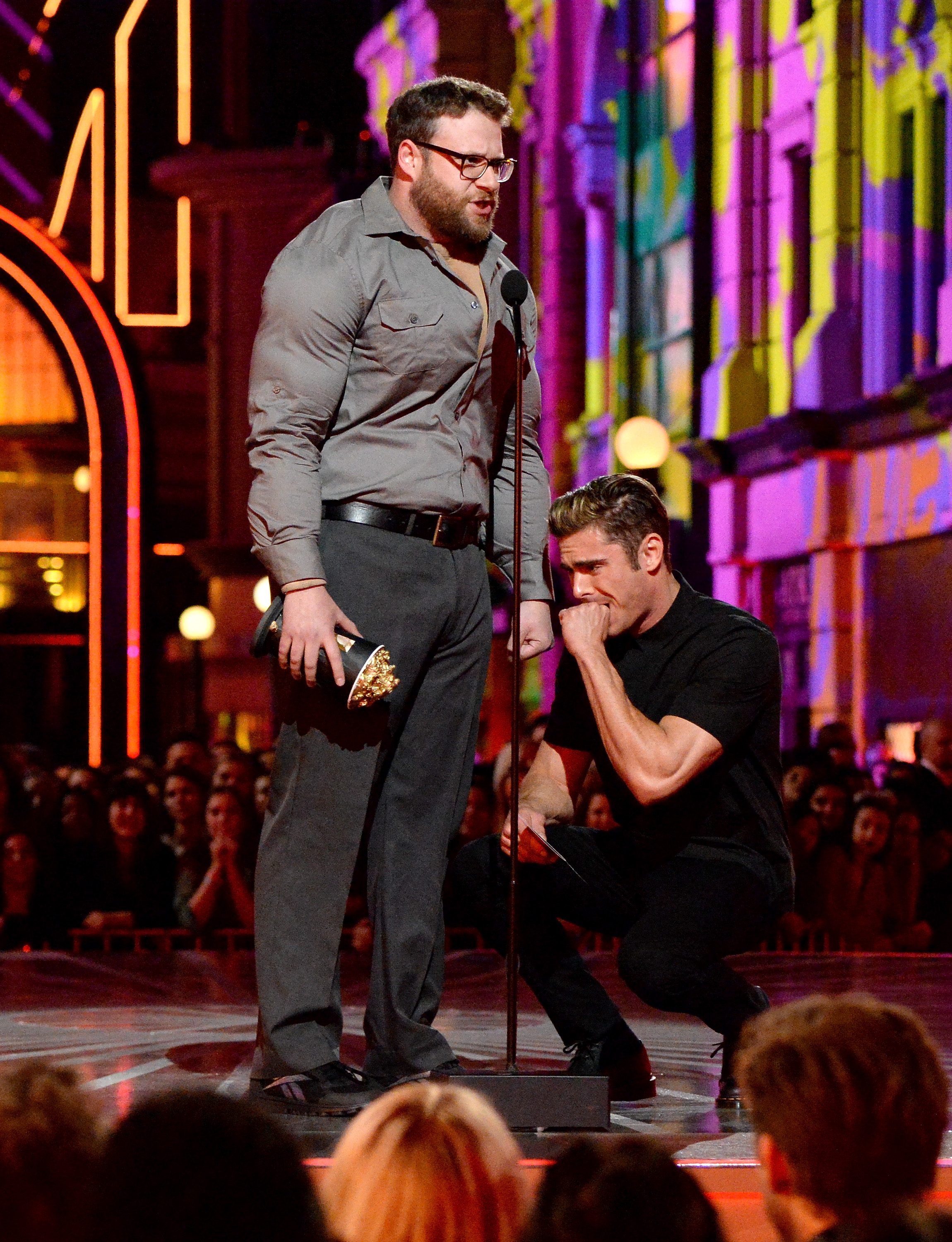 WORST: That god-awful 16 and Pregnant joke with Efron, Adam DeVine, and Anna Kendrick
Somehow, these three young actors found themselves roped into one of the most conceptually terrible bits of the evening, a series of “date” auditions for the ceremony loosely tied into the premise of their upcoming movie Mike and Dave Need Wedding Dates. But instead of Kendrick’s supposed “dates” for the boys, several “pregnant” girls (and one dude who looked kind of like a Mirror Universe version of Kevin Federline) showed up on stage. It was apparently a nod to MTV’s 16 and Pregnant, a show the network probably did not need to remind viewers of, and it fell unbelievably flat. Maybe what Mike and Dave really needed was a better joke. 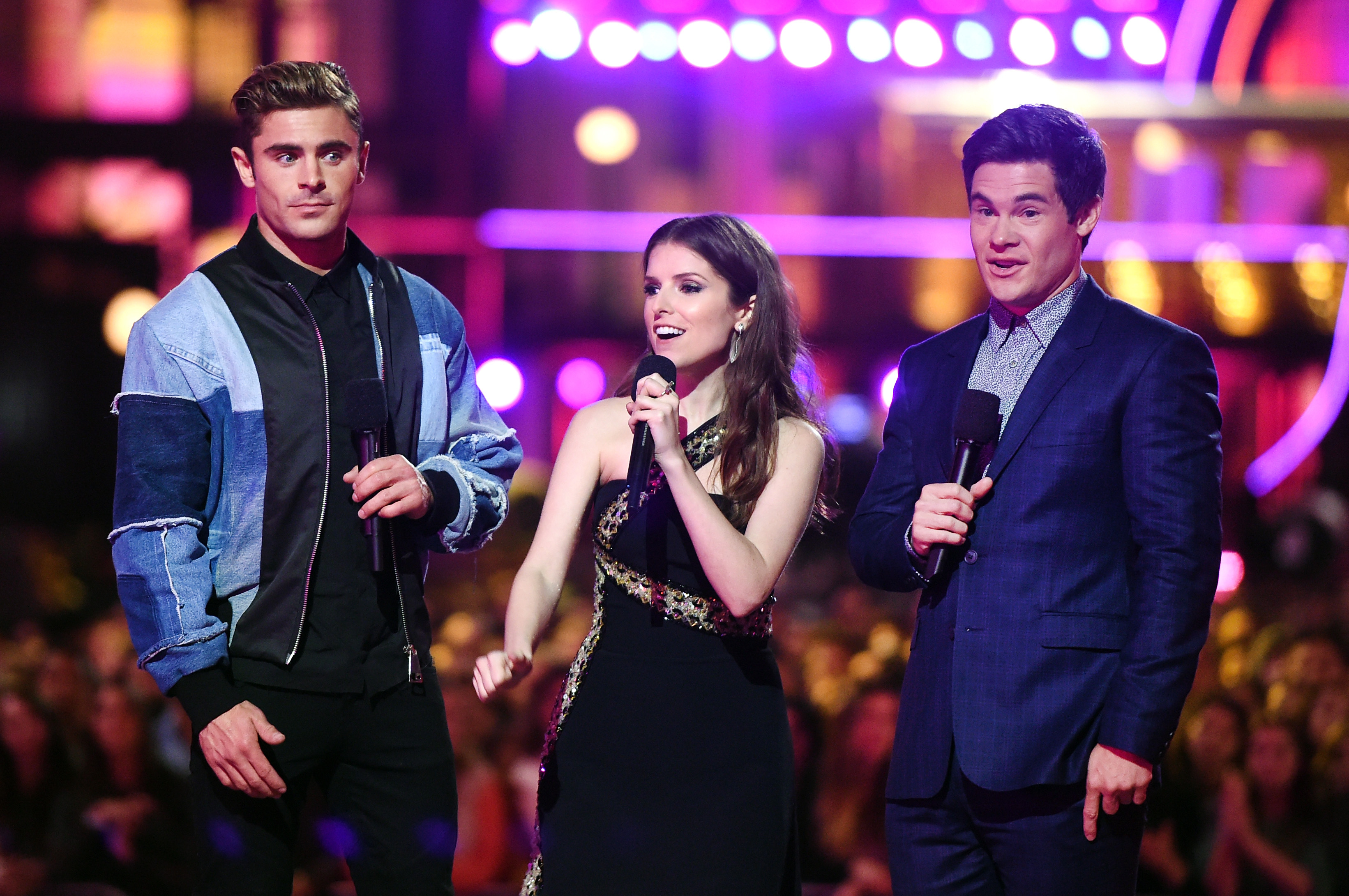