Inside 'What Would Diplo Do?': How the TV Comedy Nails EDM's Bro Culture - Rolling Stone
×
×

In the macho world of superstar DJs (and irate presidents), Twitter is the battleground, the premier forum for airing grievances about the competition. Case in point: In March of 2016, Diplo – who made $23 million that year, according to Forbes – decided that another producer, Zedd ($24 million) had plagiarized the work of the young Australian beat-maker Flume. So Diplo took aim on social media and let fly: “[You’re] young and rich and a great musician … Use that to your advantage … Don’t be such a pompous cornball loser also I fucked your girl.”

This now-deleted tweet represents an apt distillation of Diplo’s truculent online sparring – he has also tangled with David Guetta, Flo Rida, Portishead’s Geoff Barrow and Lorde on the platform. So it’s not surprising that the incident resurfaces in the debut episode of the new Viceland series What Would Diplo Do?, in which James Van Der Beek of Dawson’s Creek fame plays the superstar DJ as an arena-filling bozo – albeit as an EDM dude who you can’t help but love despite his evident shortcomings and impulsive bro-behavior. (It premieres on August 3rd.)

Diplo on Madonna, Bieber and Why He Doesn't Hate on EDM

“This show isn’t a reflection of myself,” says Diplo, responding to questions over email. “It’s more of a reflection of my Twitter persona, which was always a joke. In the past few years, I left it alone because I didn’t think people understood the joke and took all my sarcasm seriously, so it wasn’t worth defending myself. But for a while it was pretty golden and this is a sort of social commentary on the social media and the EDM age.

“I view it as sacrificing myself to poke fun at DJ/EDM culture as a whole,” he adds. 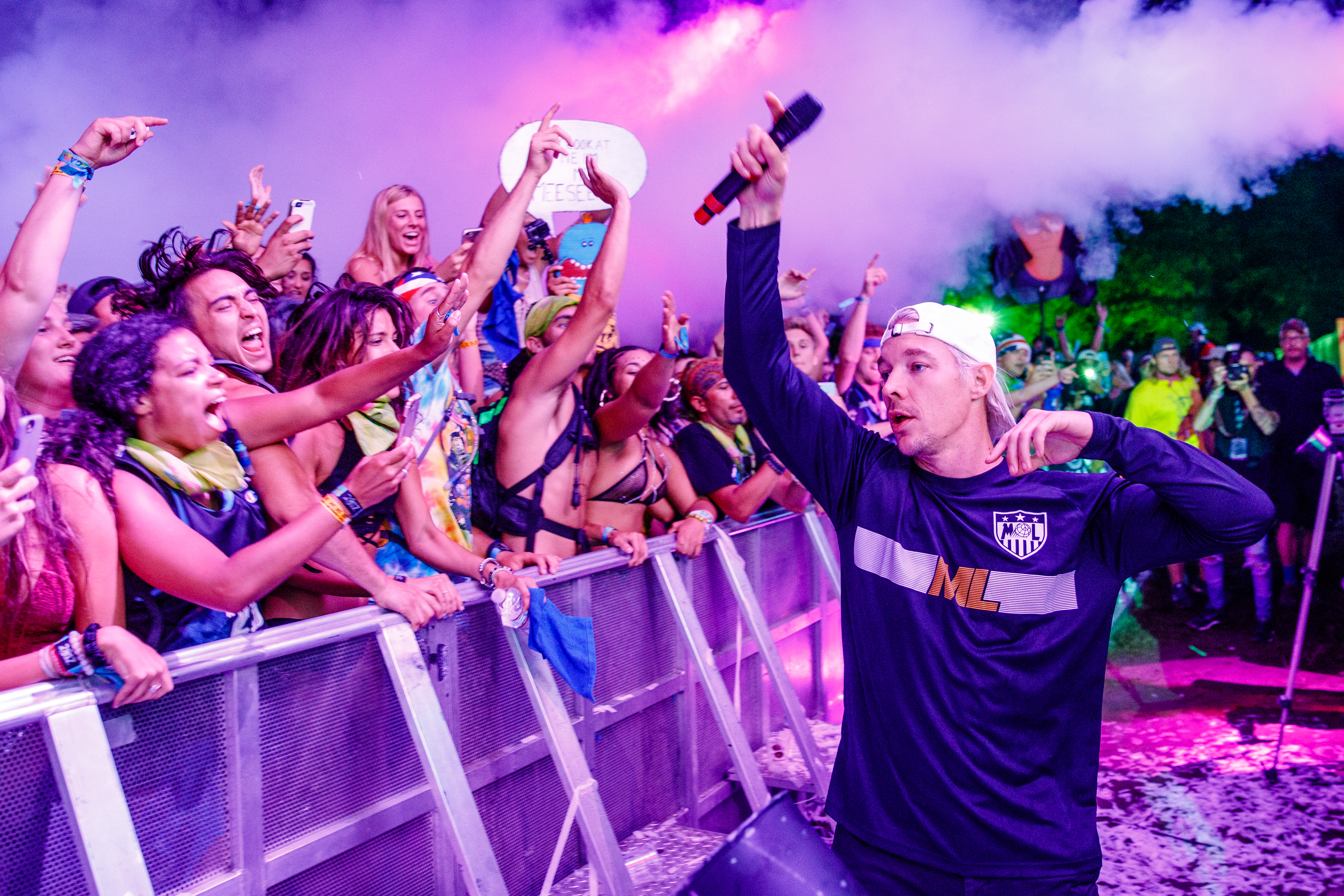 It’s a smooth bit of reputation-jiu-jitsu for Diplo, where knowing self-deprecation subtly leads to self-aggrandizement: His life is so ridiculous and cool, but he’s aware of it, so he makes fun of it – and therefore becomes that much cooler. There’s a similar wink behind the name of his label, Mad Decent, and the compilation title Random White Dude Be Everywhere.

What Would Diplo Do?, however, was not originally conceived as a series for satirizing electronic music excesses or a burnishing bad-boy shenanigans: The origin of the project was an advertisement urging people to buy tickets for Diplo’s annual Mad Decent Block Party last year. “[Director Brandon Dermer’s] idea was to have me play [Diplo] in a Dollar Shave Club commercial-type vibe,” explains Van Der Beek. “He thinks his life is completely normal, it’s obviously not … and everyone around him is just rolling their eyes at him.”

Dermer believed Van Der Beek would be uniquely qualified for the role after his “masterful” work on the show Don’t Trust the B—- in Apartment 23, where the actor played an amusingly self-important version of himself. (The actor has also used his Dawson’s Creek past for ammunition in Funny or Die skits like “Asshole for Hire.”) In the Mad Decent ad, Diplo walks to work through a hallway filled with gyrating dancers, gives perfunctory instructions to a cadre of studio rats who make his music for him, defeats a passel of ninjas and then rides away on a white horse. “I added ninjas at the end, of course,” Van Der Beek adds. “What’s life without a few ninjas to represent the haters in your mind?”

The spot was originally a one-off – “We all thought that would be it,” the actor says – but Viceland was looking to make its first foray into scripted programming, and the network believed the ad might make a good candidate for a short series. “We all went back and thought about it and came to the conclusion, ‘Holy fuck, this could be a show,'” Van Der Beek remembers. “What I saw was: EDM genius sucks at life. Parables about life through the eyes of a clown.

“He has this superpower, which is being able to channel the right beat, the right hook,” Van Der Beek continues. “Then you give him blindspots other people don’t have: one-on-one relationships or just a vocabulary. [Diplo] is super sharp, so we thought it would be really fun to make him selectively dumb.” Add to that regular encounters with ninjas – every time the DJ comes across a critic on social media, reality fades away and breathless hand-to-hand combat ensues – a horrendously dressed knucklehead friend named Jasper (played by the Mad Decent producer Dillon Francis) and a series of nutty plot lines, and you get what Van Der Beek calls a “fun, whacked-out little show.”

Diplo contributed ideas, stopped by the writer’s room occasionally and signed off on some unflattering scenes: In the first episode, no one disputes spoof-Calvin Harris’ pronouncement that the musician is “a righteous dick.” “Once you get all that out of the way, you can move forward, right?” Diplo says, though he acknowledges that for him, those moments are “hard to watch.” As a possible consolation prize, more combative tweets, at least for now, can appear through a verified spoof account with Van Der Beek’s photo on it. Take, for example:

According to Van Der Beek, Diplo’s willingness to be called things like “righteous dick” was “the only way this show could have happened…. If there was any preciousness about him, it would’ve been impossible. He really had no boundaries in terms of making himself look bad. I actually had to bring him around to the idea that we don’t make him completely ridiculous. We imbue him with some attributes that make him likable enough to want to hang out with him for more than just one episode.”

Dermer, who originally met Diplo when he directed the music video for Major Lazer’s “Scare Me,” describes the show as a mix of mockumentaries like This Is Spinal Tap and Popstar: Never Stop Never Stopping, music videos and “surreal heightened reality.” (Francis, for his part, triangulates the series as existing in a space between “The Office, Curb Your Enthusiasm and Workaholics.”) “I wanted it to feel committed; I didn’t want it to feel like a sketch,” Dermer adds. “I absolutely love SNL, but I didn’t want it to be an Saturday Night Live caricature of Diplo. I wanted him to be an interesting, complex person.”

And not only is What Would Diplo Do? Van Der Beek’s first time running a show, it’s also Viceland’s first scripted series – an experiment, the director says, which suits both the comedy and the network’s ideal what-the-hell-did-I-just-stumble-upon viewer. “The Viceland audience is a wide net,” he explains. “There’s people who go for the political, thought-provoking, challenging stuff. But then there’s people who just want to watch Action Bronson [host of Fuck, That’s Delicious, in which the rapper globe-trots in search of good eats] and have a good time.”

Diplo suggests that the show was crafted with both groups in mind: “We wrote it for people that might not know anything about the music.”

“I think it’s such a crazy idea that people are going to watch it,” Francis declares. “Because they’ll be like, ‘Wait, there’s a show about Diplo? Why?!?'”