From Representative to Remarkable: 'Vida' and 'This Close' Level Up - Rolling Stone
×
×

Greater diversity in television is a storytelling good as much as a political one. The medium has made some long-overdue strides in the last few years with inclusive casting and shows that offer fresh perspectives to an ever-wider audience. But while some of these series have been great from the start, like FX’s Pose, others have needed more fine-tuning.

Last year saw the debut of two new cable shows about groups rarely put at the center of a TV narrative. Sundance’s This Close was about a pair of deaf best friends, one a straight woman who speaks and can hear a little with electronic assistance, one a gay man who doesn’t vocalize at all. Starz’s Vida focused on a group of Latinx women, many of them queer. In their six-episode debut seasons, both shows had strong commands of the subcultures they were depicting, but a less firm grasp of how to tell compelling stories set inside those worlds.

This Close was able to easily and smartly convey, for instance, some of the unexpected benefits and unique challenges of being deaf in a mostly hearing world, like an episode where the leads were oblivious to a crying child on an airplane, only for one of them to be hassled by TSA agents who misinterpreted demonstrative use of sign language as threatening gestures. And Vida‘s East L.A. neighborhood felt instantly like a place the audience had been visiting for years, even as it had its own unwritten rules. But This Close seemed to run out of material for its various romantic and emotional entanglements well before that first season ended, while Vida played like a low-simmering three-hour premise pilot about two estranged sisters inheriting their mother’s bar in the part of town they’d fled years before. Both were very much works in progress.

Vida returned earlier this year with an expanded 10-episode season, vastly sharper. Having used the immersive but thin first season to properly orient the audience into the lives of type-A businesswoman Emma (Mishel Prada) and the free-spirited Lyn (Melissa Barrera), creator Tanya Saracho immediately seemed more confident about the kinds of stories she wanted to tell and how she and her collaborators wanted to tell them. Season Two moved more briskly as the sisters and Eddy (Ser Anzoategui), the stepmother they never knew about, struggled with what to do with the bar, with their lives, and, for the sisters, with the various opportunities for romance — or just sex — available to them in this part of town. The bisexual Emma spent much of the season fighting an attraction to bar consultant Nico (Roberta Colindrez), often using ex-con contractor Baco (Raúl Castillo) as a bewildered flesh-and-blood sex toy to distract herself from her emotional desires. Lyn dated a handsome local politician who was into pegging, even as she kept being drawn to former flame Johnny (Carlos Miranda). And young activist Marisol (Chelsea Rendon) moved in with the family to take care of the injured Eddy, while her anti-gentrification allies were plotting a major protest against what Lyn and Emma were doing to the bar.

There was suddenly a lot going on, all of it smart, much of it sexy (and very much focused on and understanding female desire, rather than looking in on it from the outside the way so much of television does), with a solid mix of pathos and humor. The episodes were also much more clearly differentiated from one another than they had been a year ago, with an installment where the sisters have very different experiences at a local art show a particular standout. Vida had ceased to be an interesting world in search of a TV show, and come into its own. 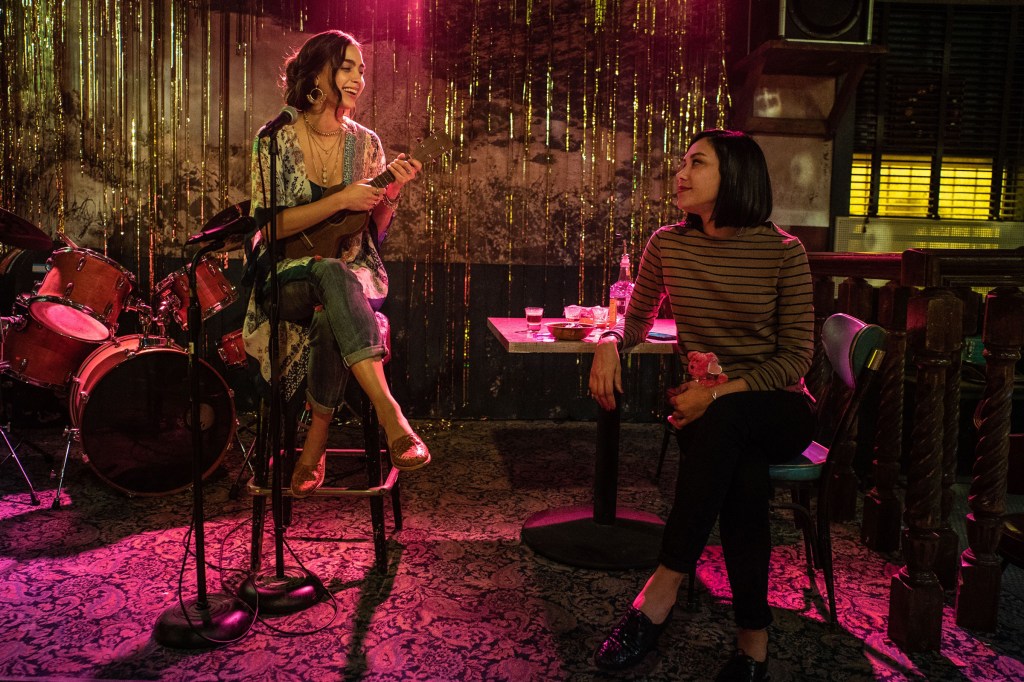 Melissa Barrera as Lyn and Mishel Prada as Emma in ‘Vida.’

This Close, which returns on September 12th with an eight-episode season, has similarly leveled up. Created by its stars, Shoshannah Stern and Josh Feldman — who wrote it as a way to give themselves the kinds of parts they were struggling to find in a business that hasn’t had much use for deaf performers — the show in its first year had mainly been about the co-dependent friendship between Stern’s publicist Kate and Feldman’s graphic novelist Michael, and the way it interfered with their love lives. Season Two picks up right where Season One left off, with Michael having just been hit by a car(*). And it is still very much about the ways that Kate and Michael’s bond is unhealthy for both of them, particularly as Michael gets more serious with on-again, off-again boyfriend Ryan (Colt Prattes). But the new episodes feel more adventurous and less repetitive than the first batch. The show is still profoundly informed by the specifics of being deaf — and also (as happens with the characters on Vida who are queer as well as brown) about the added social burden that Michael can experience as a deaf gay man — but it’s much better at a lot of narrative basics like tone and pacing.

(*) One of the best arguments for greater diversity in storytelling is that it breathes new life into what is now a very old medium. So many series have had characters run over by cars, trucks, and buses that it’s stopped being a surprising narrative device. But the particular circumstances of this accident — Michael can’t hear the oncoming traffic, nor does Kate (who is walking away after an argument) know that anything has happened until she’s several blocks away and sees first responders driving back the way she came — make it seem new and fresh.

With the increase in episodes and ambition comes growth in the world itself. Kate is presented with a wealth of romantic options beyond longtime boyfriend Danny (Zach Gilford), including her high school ex (Austin Nichols) and even Michael’s hearing brother Jacob (Moshe Kasher). Steven Weber, Marcia Cross, and Lisa Rinna all turn up as parents of various characters (joining Marlee Matlin, who had already appeared in Season One as Michael and Jacob’s mom). It can occasionally feel like a contrivance when Kate or Michael run into a stranger who can sign (whether they’re also deaf or just know someone who is), but for the most part, the show makes clear how difficult it can often be to find someone who knows ASL when you need it. (Camryn Manheim has an amusing cameo as a therapist Michael and Ryan visit not because she’s a good match for them, but because she works at a local deaf school.) And the mere fact that long stretches go by without spoken dialogue as characters communicate through ASL demands extra attention as you watch, even as it’s creating a similar feeling to what Kate goes through when she’s in a room with hearing people who are speaking quickly with one another. The show almost never goes fully silent (and uses a lot of well-curated indie rock on its soundtrack), but it finds other ways to convey the particulars of its leads’ lives to a hearing audience as well as a deaf one.

As with Vida, the new episodes are livelier and more delineated from one another, like the group going on a camping trip where darkness (and a dying battery for Kate’s hearing aid) creates complications, or Michael’s drinking problem intersecting with his and Ryan’s tradition of “Wigminton,” a day of pointless drunken sports challenges conducted while wearing flowing wigs. (It’s a nice — and suitably dark — approximation of the annual “Sunday Funday” episodes of You’re the Worst. And this season as a whole is funnier than the first.)

Because even the Peak TV landscape can get sadly homogenous about the kinds of characters spotlighted, the ongoing existence of these shows makes them notable. But with these new, very good second seasons, Vida and This Close are less worthy of attention for what they’re about than for how excellent they’ve become at bringing those worlds to life. It’s a given that greater diversity on TV is a good thing; what’s even better is when marginalized groups get the artfully-told, compelling stories they deserve.