It’s just another day at the office for David Blaine – which, today, means repeatedly watching footage of a bullet being blasted into his mouth.

In an editing room in Manhattan’s Flatiron district, Blaine, dressed in characteristic all-black pants, V-neck sweater and shoes, is making last-minute tweaks to his latest special, David Blaine: Beyond Magic, which airs tonight on ABC. As in his past shows, the street magician is seen blowing the minds of regular folks and celebrities alike with card tricks and how’d-he-do-that? maneuvers; this time, we get to watch Johnny Depp, John Travolta, Drake, David Beckham, Dave Chappelle and others gasp (and nearly upchuck) as they watch Blaine extract living creatures and jewelry from his stomach. Carefully watching a rough cut, Blaine begins to make adjustments, like editing the voice-over where he explains to a doctor that he wants to turn himself into a “human aquarium.”

Yet he’s most focused on the show’s climatic moment. At a Las Vegas arena in August 2015, Blaine attempted one of his most potentially lethal tricks in a career full of them: the bullet catch. The stunt has been around for over 100 years and has supposedly claimed the lives of several previous magicians. Blaine himself attempted, and nailed, the trick in a special in 2009. But unable to secure a marksman for this new attempt, he decided to pull the trigger himself. As he watches, Blaine sees himself being fit for a special mouth guard, then sticking a custom-made steel cup into his mouth and yanking on a string that sets off a rifle, all in front of 20,000 people. With the help of a laser pointer that ensured the bullet was aimed at his mouth, and not his head, Blaine survived.

Sitting nearby and taking notes is Selinie Mavropoulos, the head of Blaine’s production company. Like the performer, she is reliving the moment the bullet plows into the mouth cup – and breaks the supposedly safe mouth guard in two. “It’s fucking crazy,” she says, not entirely approvingly. The prep for this stunt was so intense – Blaine gave signed indemnification letters to each of his team so they wouldn’t be legally responsible if he died – that Mavropoulos quit working for her boss for two months after.

“I hope nobody ever continues this and I hope this ends the tradition of the bullet catch,” Blaine says. “I do not recommend this.” 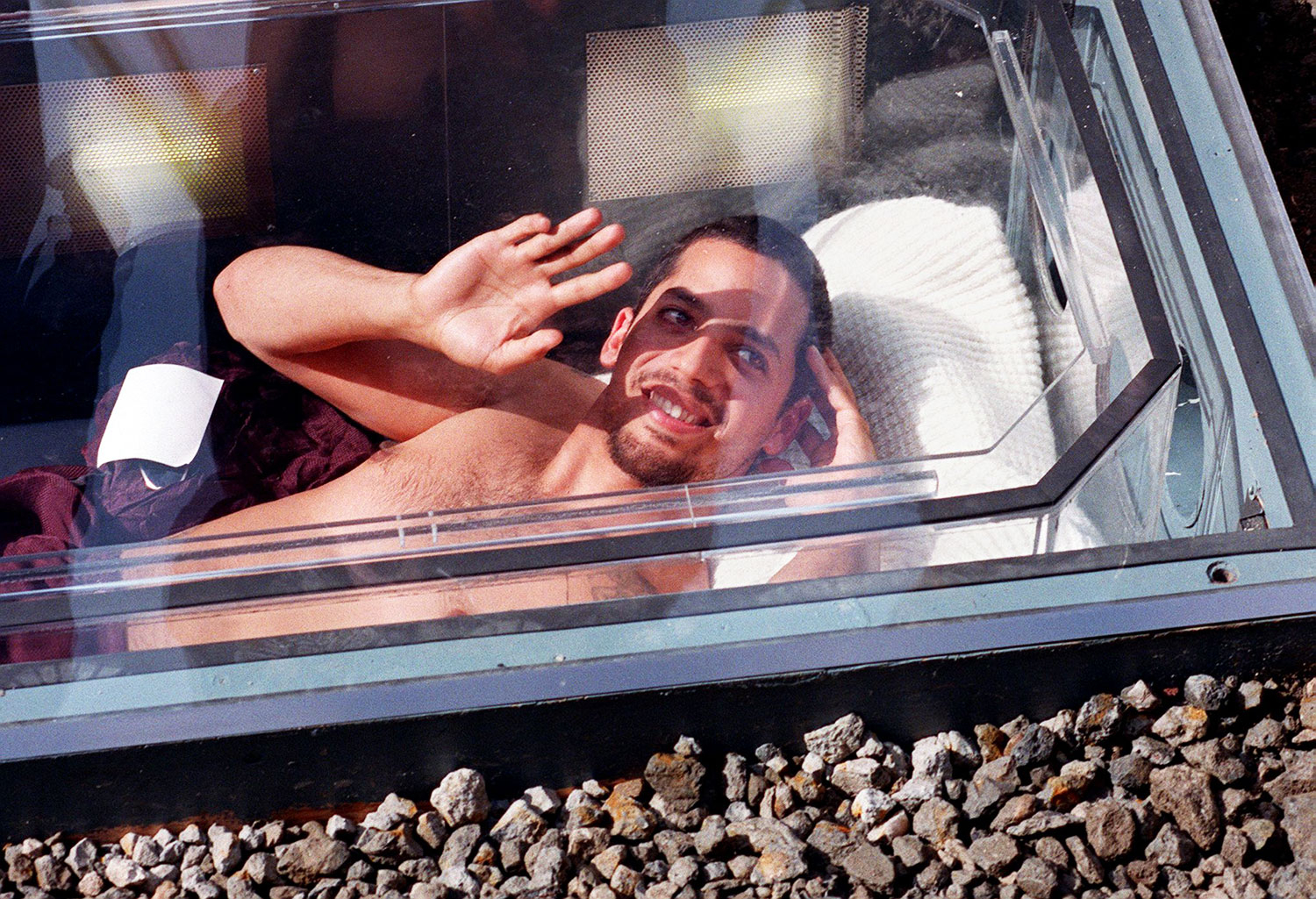 Next year marks the 20th anniversary of Blaine’s first TV special, Street Magic, which established him as the Houdini of the grunge generation. In his specials and public stunts since, he’s been encased in a massive ice cube, “buried alive” in a see-through tomb, and dangled above the Thames River in London in a clear box. He’s stood atop a pillar for a day and a half; he’s been submersed in water for eight days straight.

Blaine has survived them all, sometimes just barely. Now 43, he is, in some ways, fairly settled. He still lives in the same Greenwich Village apartment where he’s been for 20 years, and has a nearly six-year-old daughter who lives in Paris with his ex-fiancée, Alizee Guinochet. He can look back over a career in which he’s performed tricks for world leaders, including the Clintons, and been linked with Madonna, Fiona Apple, and others.

That career has its roots in his youth in Brooklyn, where he learned card tricks to show his mother (with the help of a sympathetic librarian, who gave him a how-to book on the subject). “When I did it the first time for my mom, she went crazy,” Blaine says, taking a break from editing his show. “I got addicted to the reaction. It’s simple – you’re making your mom thrilled. She loved it. Then I did it for her friends and they’re loving it … my mom was so proud.” Given that Blaine’s father left their home when he was young, was Blaine trying to make his mom’s life a little better? “Yeah,” he says, “that was probably part of the reason. There was no father.”

With his mother and new stepfather, Blaine moved to New Jersey, but the allure of magic – and stunts, thanks to a photo of a chained-up Houdini that stayed in his mind – went with him. He attended magic camp at 10 and moved back into New York City at 18, where he began honing his card trick skills for tips at posh Park Avenue restaurants. Those jobs lead to hired gigs for upscale sorts like designer Diane von Furstenberg and a buzz that soon brought Blaine to TV screens around the country. 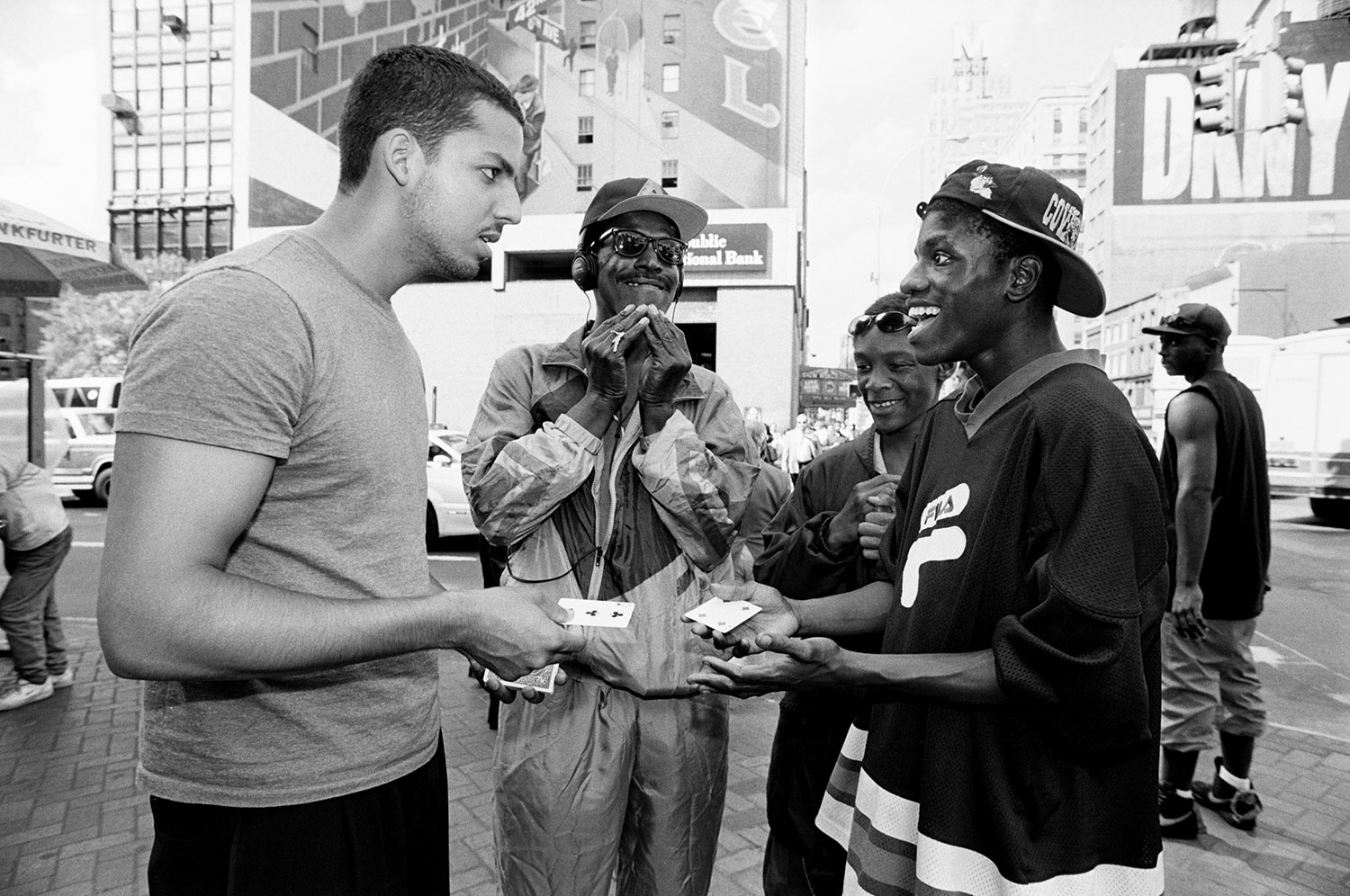 Just before his editing session today, Blaine voted for Hillary Clinton for president, even taking a photo of his filled-in ballot. (“Is that legal?” he asks.) Ironically, his 1999 see-through-tomb stunt was performed with the help of soon-to-be-president-elect Donald Trump, who allowed Blaine to use a plot of his land on New York’s Upper West Side. “He was great with me,” Blaine says. “When I met him, I was like 20 or something and did magic for him at a party. And I said to him, ‘One day , I’m going to do a stunt – can I use your land?’ He didn’t know me; this was before I was on TV. I called him back a few years later and he gave me the land, no questions asked. As far as someone who was good to a kid he had no reason to be nice to, he was.”

Asked if he ever winces when watching old footage of himself with Trump on those shows, Blaine shakes his head unflinchingly. “I don’t judge anybody,” he says. “People are pointing a finger at him [Trump]. But you can’t do that. The way I think about, you need to reflect what America is, what we like to absorb. We like Dancing with the Stars or The Apprentice. He got as far as he did because of what America likes. So, no, I don’t cringe at all.”

“It will be a death-defying tour – all the most difficult things I’ve done combined in one evening. For 100 shows around the world, I have a less than five percent chance for something not to go wrong.”

What makes Blaine cringe, however,  are some of his past stunts – in particular, the time he encased himself in ice. He practically shudders when the topic comes up. “I’m surprised I didn’t go into shock,” he says. “I don’t think I could do that again under any circumstance. It was a warm November and water was being pumped through was making the ice just drip all over me and we were worried it would collapse. I was staying awake and dealing with sleep deprivation and I had nothing to lean against. After that, I do believe that anyone who goes through any sort of mental suffering – that’s the worst a person can be, period.”

What won’t Blaine even attempt? Again, he doesn’t hesitate – sleep deprivation. “It’s very difficult,” he says solemnly. “I’ve done five and a half days and started hallucinating. The world record is just over 11 days. But your brain tries to trick you into falling asleep.”

Twenty-plus years into a career that could have easily killed him, Blaine is still in search of new stunts to punish himself and shock and thrill anyone willing to watch. There is no shortage of forgotten tricks – “so many things out there from a 100 years ago,” he claims. To prove his point, he pulls out his phone and punches up an archival photo of Mirin Dajo, a Dutch magician from the first half of the 20th century who stuck swords and other sharp objects straight through his body without harm (nor, apparently, much bleeding). Blaine has swallowed swords, but this attempt – “the craziest one,” he says with a smile – would take previous sword tricks to another, more demented level. “Nobody believed it was real, but it seems pretty real,” he says, looking closer at the photo. “He could still go jogging while he was pierced.” If Blaine attempts it (it’s still under consideration), he’d have to lose weight to approximate Dajo’s skinny physique, which helped pull off the trick. 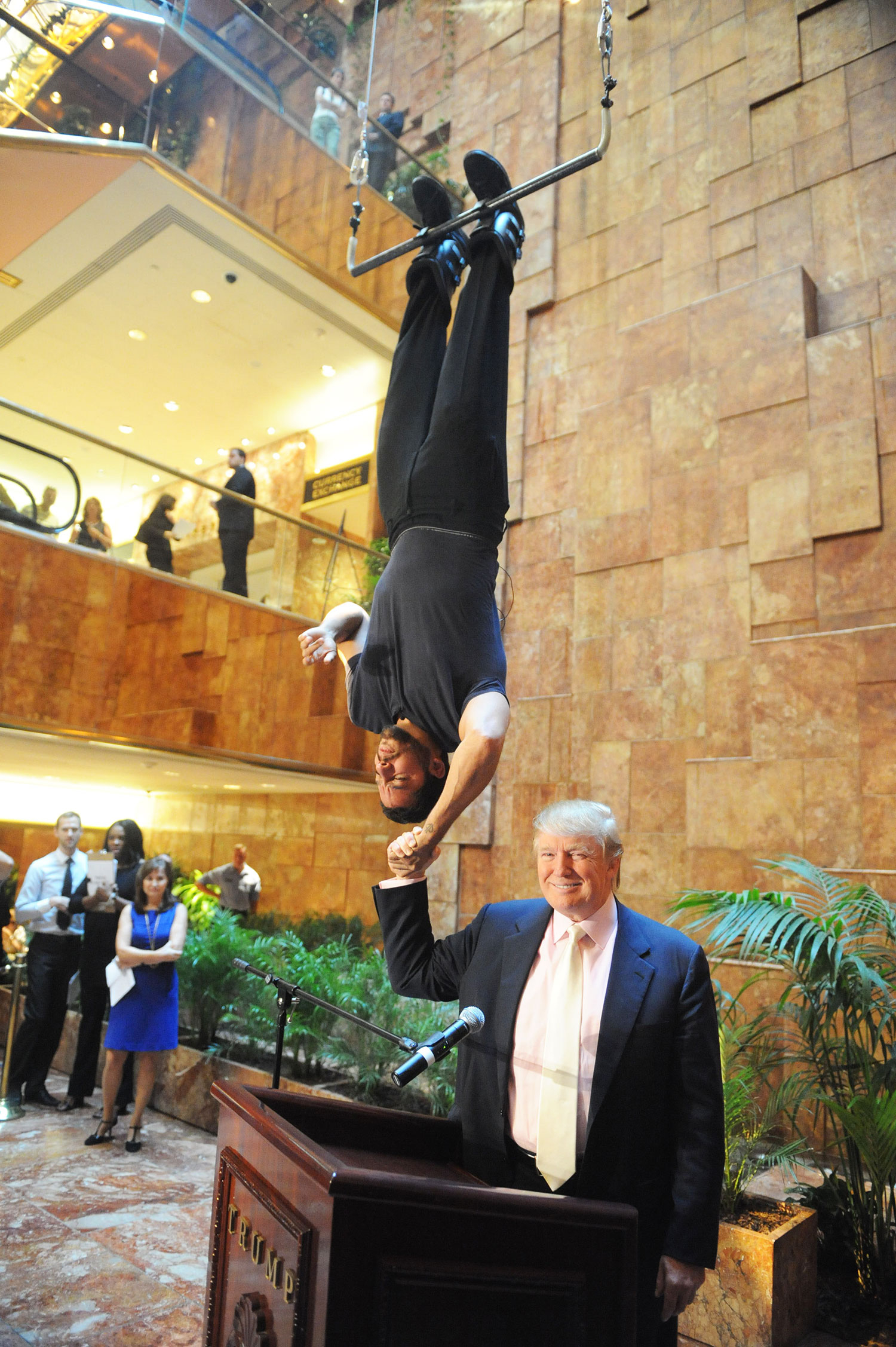 But even if he doesn’t proceed with that plan, Blaine has another, more challenging idea coming up fast: a spring tour in which he would replicate, in one night, many of the stunts that made him famous, from holding his breath for long periods of time to catching bullets. If that weren’t challenging enough, he will try to top the previous night’s record each time. “It will be a death-defying tour,” he says. “It’s going to have all the most difficult things I’ve done combined in one evening. As a whole, it would be almost impossible to complete.”

The editing done for now, Blaine has business to attend to in the next borough, Queens. A car service is waiting to take him, but instead he jumps on his motorcycle. Soon he’s zipping between cars, slowing down and twisting his handlebars to squeeze between two vehicles – all in bumper-to-bumper Manhattan traffic.

In its own way, the ride feels like flipping-the-bird-at-injury stuff; even cops by the side of the tunnel shake their heads as he flies by. Having already proven he’s had more than nine lives, Blaine is nonplussed. “Riding a motorcycle every day, over and over, is technically more dangerous,” he says, the wind shooting around him, “because you’re doing it so often you’re at risk. This is a short ride, but if you to do it day in and day out, as opposed to the bullet catch once in a blue moon, you’re safer in my shoes.” For now, at least.

Suddenly, coming out of the tunnel, he stops at a light and a group of construction workers – white, Hispanic, African-American – who stop to admire his bike. Sensing an audience, Blaine asks them, “You guys want to see a card trick?” Pulling over, he grabs one of the deck of cards he always carries with him and takes off his helmet. They recognize Blaine now; he dazzles them as always, pulling a card out of one man’s sleeve and leaving them scratching their heads. Then he jumps back on the bike and speeds off.