It’s already become a legendary bit of modern showbiz lore. The British actor, 41, was originally hired as a writer on Apple TV+’s breakout hit series Ted Lasso. After the writers room wrapped on the first season, however, Goldstein found himself struck by one of the characters — specifically, Roy Kent, the intimidating veteran forward of the show’s British premier league soccer team AFC Richmond. He felt such a kinship with this stoic tough guy, in fact, that he emailed a self-taped audition of five scenes to the production team. The tapes, which included the “If I don’t hear silence I’m gonna start punching dicks” scene from the pilot, ended up scoring him the role. The rest is history.

Alan Sepinwall: How Do You Solve a Problem Like the 2021 Emmys?

“I felt him,” Goldstein says of the gruff, aging footballer, speaking over Zoom from the attic of his home in London. “It was partly that I felt like I understood him. I won’t name them, but we have family friends who are professional footballers, so I grew up around these types. I was around when they retired, and I know how difficult that transition is. How football is your life and then suddenly it isn’t — and you have no training for the real world or normal life. There’s a real sort of tragedy to that. No one wants to stop paying football — it’s just that your body can’t. That’s tragic.

“I understood the sadness of that,” the actor adds. “I understood his depression. And, most of all, I fully understood the rage. It was all the aspects of him. I thought, ‘I am Roy Kent.’ The difference is that I don’t want people not to like me, so I suppress it more.”

The role, which landed the actor an Emmy nomination for Best Supporting Actor in a Comedy Series, has been transformative for Goldstein, who has been a writer, stand-up comedian, actor and TV series creator for years. He grew up in Sutton, England, a movie-loving kid who was introduced to classics like An American Werewolf In London, Casablanca and The Jungle Book by his dad. At six, Goldstein wrote a story for school about a castaway. When he showed it to his father, Dad said, “You know that’s a job. A writer is an actual job.”

The moment that stuck with Goldstein. By age 10, he was making short horror films on MiniDV camcorder and a three-button editing machine. “In hindsight I’m like ‘Was I like the fucking boy in Rushmore?’” he says. “I was making short films and putting on plays at school.” He considers, then confirms: “I was also in love with my teacher, so yeah  — I was the kid in Rushmore.”

For years, Goldstein kept his head down and did the work. He starred in a 2015 film called SuperBob. He landed a one-episode spot on Doctor Who, and had recurring roles on British series like Drifters, Derek and the British incarnation of Drunk History. He won Best Supporting Actor at the British Independent Film Awards for a quirky indie movie called Adult Life Skills.

Then, in 2017, he flew to Los Angeles for pilot season and shot a pilot for Ted Lasso producer Bill Lawrence. The pilot was for a comedy called Spaced Out, which didn’t get picked up. Still, Goldstein and Lawrence kept in touch. In early 2019 Lawrence called and said, “I’m about to do this show for Jason Sudeikis and I think you would be perfect to write on it. Can you come next week?”

To secure the gig, Goldstein had a FaceTime call with Sudeikis, which he assumed would last 10 minutes. The pair spoke for hours. “It finished and I was like, ‘Oh God, I’m in love. I really want this to happen,” Goldstein recalls. “On the Monday I was there in LA in the writers room. All of these things are just fucking life-changing.”

At that point, no one knew Ted Lasso, based a series of NBC Sports promo spots that Sudeikis made in 2013, would be a success. When the series premiered last August, in the heart of the pandemic, it was like lightning in a bottle. The fish-outta-water premise of a happy-go-lucky American football coach is hired to whip a failing soccer team into shape could comfortably be called “familiar.” But the show’s central conceit — that kindness is a trait worth aspiring to — felt unique in the age of TV antiheroes, and offered comfort in a chaotic, uncertain world. It quickly became the TV show of the moment.

And Goldstein’s take on Kent as a tightly wound man with a lot of internal turmoil — who takes no shit but loves the game, dotes over his young niece, is in a stable-ish relationship with the team’s marketing manager Keeley Jones (played by Juno Temple) and, as Season Two progresses, is beginning to coach — quickly made the character a fan favorite. He still doesn’t know what to make of it. “It’s … what’s the word? Incomputable.” he says. “It’s too big a thing to make sense of. I constantly feel like it’s a prank and we’re going to be told ‘Oh no, we’re only joking.’” 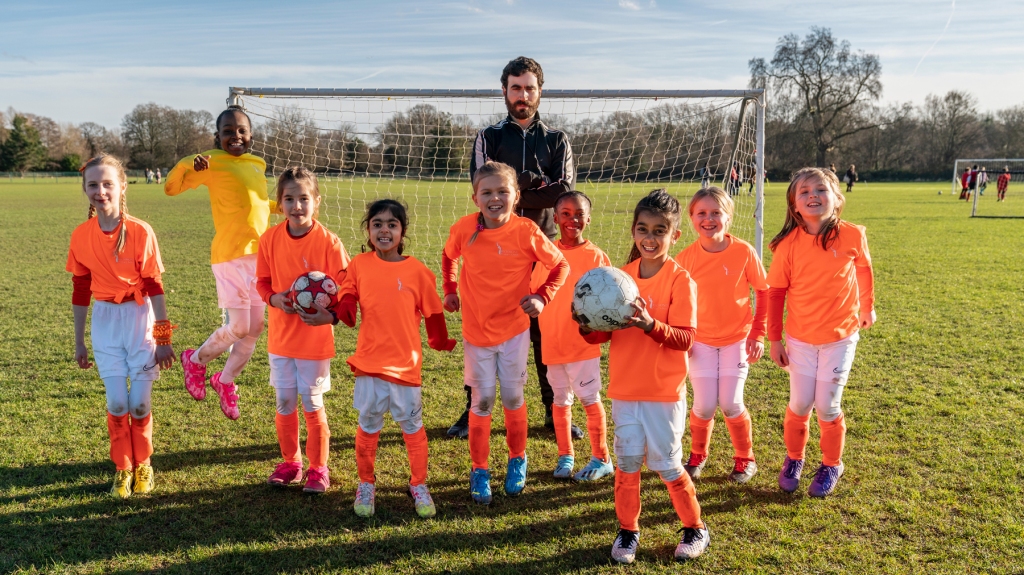 Goldstein in a scene from Season Two of ‘Ted Lasso.’

“I think Brett himself is a very private person, which is something I respect and love about him,” Temple says. “And then as an actor he’s incredibly brave. He isn’t afraid to have Roy’s secrets. And you can’t help but fall in love with Roy because of how much Brett loves playing him and how much Brett puts into playing him.”

Goldstein, who professes that he is not skilled at football but can “run faster than Roy,” also takes some inspiration from his dad, a Tottenham fan and “football hooligan.” The game is a religion in Goldstein’s family home and the actor is interested in how the sport allows men to communicate in a society that doesn’t always encourage that man-to-man sharing.

“Me and my dad, all we talk about is football,” Goldstein notes. “I do realize, for whatever our issues are and whatever repressions there may be, talking about football is how we communicate. He’ll call me up and say ‘This is what happened at the football.’ But what he’s also saying is ‘I love you.’ And I’m saying it back: ‘I love you.’”

Even as Goldstein pursues other projects — he is the co-creator of AMC anthology series Soulmates and runs a compelling weekly podcast called Films to Be Buried With — the actor can’t keep Ted Lasso and its characters out of his head. And in working on the series, Goldstein has embraced the idea that everyone has some good in them.

“Look, when I’m [my] bad self, everyone’s a dick and I hate everyone, right?” he reflects. “But when I’m at my best self, when I’m at my most Zen, I do believe everyone is interesting if you ask the right question. Everyone has a story — even people that you hate. That’s kind of the whole deal of Ted Lasso. I get that sounds idealistic and I only feel that when I’m at my best. But then equally I spend a lot of the day going ‘Oh fuck everyone. It’s all awful.’ I get both sides of it.”

Which brings us back to Goldstein’s identification with Roy in the first place: Why did that sadness and rage strike such a chord with him?

“In terms of my career, I was definitely at a point where it felt like the train had passed me by,” he replies. “I had been working consistently but never to much notice from the industry. I loved the work but I was beginning to think it was all over. Then Ted Lasso happened. It really feels like magic.

“And as for the rage,” Goldstein adds, “people often ask me: Is it hard to get into character as Roy Kent? And my answer is no, not at all. Roy is always just below the surface. He’s me if I didn’t care what people thought of me. Annoyingly, I still do. A bit. But I’m working on it.”