A few years ago, Eric Wareheim took a photo of his then-girlfriend’s naked ass and sent it to an ice sculptor. Wareheim likes to throw raucous house parties “based on different parts of anatomy,” he says. “I did one called Black Cock [black light and penis-themed]. Another one was Laser Boobs.” The sculptor took Wareheim’s photo and used it to carve an enormous ice butt, which became the centerpiece of an ass-focused party called Snow Booty. The sculpture had a canal carved into it that served as a conduit for booze, with its lower opening at the butt hole. “My girlfriend made booty juice” – tequila and grapefruit – “and we all did shots out of her ice ass,” Wareheim says. The party also featured a snow machine and a white-apparel dress code, though the latter was rendered moot when people stripped down and jumped into his pool. Clothes have a habit of coming off at Wareheim’s parties: One time, he hired a male stripper, “and then these girls I know who strip started doing these hardcore moves and kind of freaked him out.” How crazy do the parties get? “There are limits,” Wareheim says. “People hook up, but it’s not, like, an orgy.”

You might know Wareheim for portraying Aziz Ansari’s big buddy Arnold on Master of None – the inventive, eight-time Emmy-nominated Netflix comedy series, several episodes of which Wareheim also co-wrote and directed. But he first made his name as half of the brilliantly bizarre cult comedy duo Tim and Eric. After the success of the pair’s Tim and Eric Awesome Show, Great Job!, Wareheim was able to form a mini comedy empire with his partner, Tim Heidecker, helping to foster idiosyncratic voices – their production company, Abso Lutely, is behind Comedy Bang! Bang! and the genius Nathan for You, among other series. Awesome Show also allowed Wareheim to carve out a sideline directing psychotic, hallucinatory music videos for cool acts (Major Lazer, Beach House) and devising commercials for products like Old Spice and Totino’s Pizza Rolls – brands hoping to aim some of Tim and Eric’s unhinged energies at a younger generation of irony- and Internet-addled customers. The duo’s newest series, a sort of Twilight Zone homage called Bedtime Stories, returned to Adult Swim in September.

Whereas Heidecker is married with kids, Wareheim is a bachelor and bon vivant to a degree that he’s only ramped up in recent years. He hangs out not only with Ansari but also with a crew of twentysomething artists, visiting beautiful locales with them and posting about it on Instagram. “I’ll admit I’m sort of addicted to that social media thing of ‘Look at me! I’m with hot babes on a yacht!'” Wareheim says. Like Ansari, he is a globe-trotting gourmand, willing to try anything once. “I’ve eaten cod sperm,” he says. “I’ve eaten horse.” He’s about to release Las Jaras, his own line of natural wines produced in collaboration with a Napa winemaker. At 41, in other words, Wareheim is more successful than ever – and enjoying the hell out of it.

“We stumbled into a gallery show … it was all these animatronic people and pigs
fucking each other. We were like, ‘You can get paid to do this?'”

“Do you want a barrel-aged negroni?” he asks. It’s an early Friday evening and Wareheim is at his airy midcentury modern home, on an eastside Los Angeles hilltop. “I bought this house, like, nine years ago. It was a bit beyond my budget, but a producer told me, ‘That’ll just make you hustle more,’ and he was right.” Wareheim’s wearing a white button-down and yellow corduroy short-shorts. An Instacart delivery woman is piling his foyer with bags of groceries. “I do a lot of late-night ordering,” he says, noting that when he made this particular order, “I was stoned and I went crazy – I ordered so many cookies.” He peers into a bag and laughs: “I bought a whole chicken?!” He pours me the negroni, which has been sitting for the past 60 days in a squat oak vessel perched atop his kitchen island. “Aziz got this barrel for me after Season One – it’s from a bourbon distillery in Kentucky.” As Wareheim rubs an orange peel along the rim of my glass, I notice a vintage Rolex on his wrist: “Aziz got me this after Season Two,” he says. “It’s so nice, I’m almost afraid to wear it.”

Wareheim starts tossing spoiled food from his fridge into an enormous garbage bag, making space. He slides the roast chicken in. “I was a vegetarian for seven years,” he says. He tosses some boxes of frozen chicken nuggets into his freezer. “Being a pescetarian is my goal today. Factory-farmed meat is so … Trump-ish. At this point I’ve traveled the world, eaten the best steaks in Italy. … Now I’m trying to get more woke about my consumption.”

Tim and Eric – native Pennsylvanians who met as film students at Temple University – crafted a low-fi oddball universe inspired by the clammy, uncanny ambience of late-night public-access TV: Awesome Show‘s hallmarks were violently bad sound editing, cheesy graphics, a cast that comprised both big-name guest comedians (Michael Cera, Zach Galifianakis) and transfixing nonprofessionals (ventriloquist David Liebe Hart), all of them sporting wardrobes, hairdos and makeup straight out of some ungodly ’00s-era J.C. Penney fever dream. Tim and Eric proved expert at mining the American grotesque for a new generation of comedy aficionados, scrambling the line between the absurd and the abject, the hilarious and the horrifying. “When people hang out with me for the first time, they’re like, ‘Why aren’t you insane?’ ” Wareheim says. Their influences include not only alt-comedy heroes like Bob Odenkirk and David Cross but also David Lynch, Stanley Kubrick and the scatological art star Paul McCarthy. “We stumbled into one of his gallery shows around the time we finished college,” says Wareheim. “It was all these animatronic people and pigs fucking each other. We were like, ‘You can get paid to do this?'” 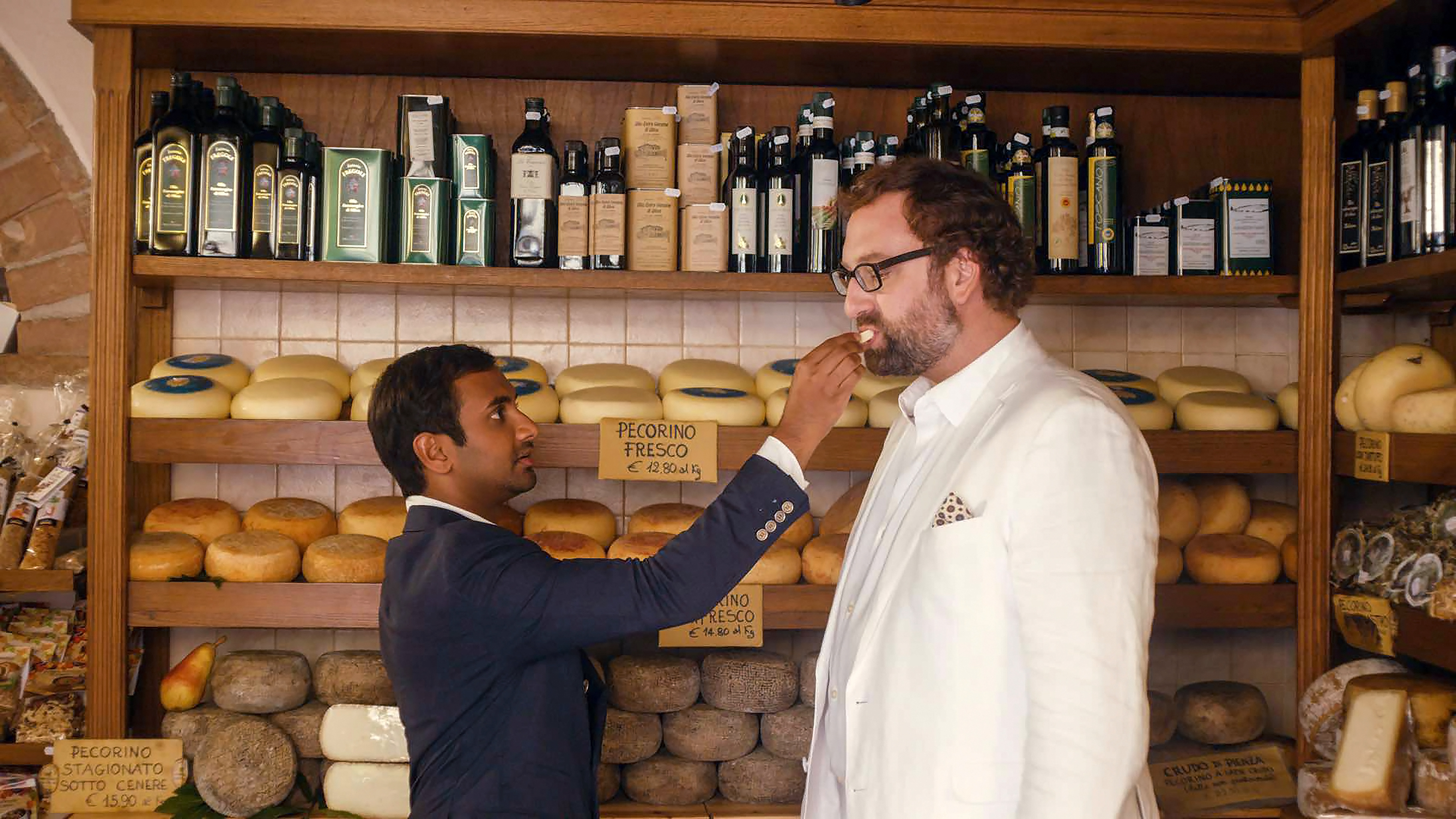 He takes me on a tour of his house. In the living room there are bright-colored paintings, photographs and sculptures by young artists whom Wareheim has befriended, like Jen Stark, Samuel Borkson and Carly Mark. “Carly does these Haribo-gummi-bear butt plugs,” Wareheim says, pointing to one nearby. He identifies Mark, 29, and Chloe Wise, 26, who is one of the more prominent members of what is often called the “post-Internet” art scene, as “my New York best friends. I hang out with them. I don’t hang out with comedians.”

He says he’s finishing a screenplay for a feature film inspired by time he spent recently as a single man in New York. He emphasizes that it is not a comedy: “It’s called Animals. It’s inspired by me going out on dates, doing stuff that’s not in my wheelhouse. I’ve dated all kinds of people. I don’t know what to tell you without getting too personal, but, like, Chloe and Carly introduced me to a dominatrix friend of theirs, and we went to a spanking party. I’d be writing on the Lower East Side and Chloe would call me from Bushwick, like, ‘Some guy’s getting fisted – you’ve gotta get over here.’ ” He recounts all this in reverent tones, like he’s describing a quasi-religious awakening. Millennials “just feel free,” he says. “Like, they’re into polyamory: ‘Let’s hang out, but I have a partner.’ In high school I was such a prude. I was a product of my parents: ‘Get a girl, get married.’ So to see young people who are so free? It’s a really warm thing.”

Wareheim leads me out to his pool and a small cabana beside it. “This is my Seventies gold den,” he says. There’s white carpeting and ample gold decor. On the adjoining patio, a bikini is slung across a chair. “The pool was my big splurge,” he says. We sit beside his hot tub, at a table holding a little jar of weed and a plastic drinking straw shaped like a penis. “I grew up with nothing,” Wareheim says. “I was a voyeur of culture, because there wasn’t much culture in Audubon, Pennsylvania. The first time I ate Thai food I was in college, and I decided I wanted to travel the world and eat food. I found a way to do it: through TV and stuff.” He sips his negroni. “Hanging out in Philly, I learned how to hustle. I used to photograph weddings to pay my rent. But I was into music and art. A lot of comedians, comedy is their only thing. Comedy wasn’t my dream till Tim and I showed people our shit and they laughed.”

Wareheim grabs a pair of swim shorts; he’s going to Ansari’s house later, and “we’ll probably get into the pool.” First, we drive to an Echo Park vegetarian gem called the Elf Cafe, where the staff all know Wareheim. He orders two glasses of Txakolina: “It’s this light, salty, mildly effervescent white,” he says. I observe that his oenophilia might surprise fans of Awesome Show, which was ferociously unpretentious, and where, on those occasions when food appeared onscreen, it was in service of gross-out laughs. “A lot of comedians are dark, fucked-up people,” Wareheim replies. “Tim and I are dark and fucked up too, but we balance it with light.” He sniffs the Txakolina and sighs with pleasure. “For me, comedy and wine are the same thing. My house parties, too. They’re all just different tools for bringing people joy.”