As a product designer at Google, Sarah Cooper was used to being pulled into business meetings because, she says, they “needed another woman” in the room. There, she saw male coworkers lavished with praise for contributions as inane as drawing a Venn diagram on a whiteboard. She started taking notes. After quitting Google in 2014 to focus full-time on comedy, Cooper poured the material she’d gathered into a couple of satirical self-help manuals that skewer the blind confidence of mediocre white men: 100 Tricks to Appear Smart in Meetings and How to Be Successful Without Hurting Men’s Feelings.

The books didn’t make a splash, but now, in a twist of poetic justice, Cooper, 42, has found sudden and widespread fame by impersonating the highest-achieving mediocre white man of them all: Donald Trump. Back in April, as a jittery nation settled into lockdown, Cooper started making TikTok videos where she lip-syncs to audio clips of the president holding forth on everything from taxes on lobster to whether he should be taking insulin. The videos blew up online, landing Cooper more than two million Twitter followers, a gig guest-hosting Jimmy Kimmel Live!, a speaking spot at Democratic National Convention, and her very own Netflix special, Everything’s Fine (out today). It’s a far cry from doing stand-up in empty pizzerias, as she was just before the pandemic struck.

“It’s incredible. I have to pinch myself,” Cooper says, Zooming from her office in an otherwise deserted Brooklyn WeWork. “I just feel like I leapfrogged, like I skipped so many steps. People have to remind me, ‘No, Sarah, you’ve actually been working at this a really long time.’”

Cooper’s viral Trump-Toks are a feat of discipline. To make videos like “How to Medical” — her breakout clip from April 23rd, wherein the president suggests that the injection of disinfectant could cure Covid — she is meticulous about capturing the lip-sync, repeating and practicing until she nails every last breath or smack of the lips. On her phone, she has dozens of takes saved of a more recent video, “How to Drugs,” where she portrays both a seemingly coked-out Trump and Fox News interviewer Laura Ingraham.

But it’s Cooper’s expressiveness — darting eyes, a cocked eyebrow, horrified looks from aides or reporters she also plays — that really makes the lip-syncs great. Her animated interpretation of Trump’s repulsive pairing of idiocy and confidence jolts viewers out of any resignation to the idea that he, and his occupancy of our government’s highest office, is some kind of new normal.

“That’s something I’ve always done, but I thought it was a bad thing about my acting,” Cooper says, referring to her exaggerated facial expressions. “With this, it worked, I think because it’s kind of like a silent film. You have to over-emote a little bit, and that does come very naturally to me.”

Her celebrated Trump impersonation appears in Everything’s Fine, but the 49-minute special may take fans by surprise. Cooper also used the format as a chance to flex different muscles. A cameo-heavy sketch show, it takes place in a different world, one in which a fictionalized version of Cooper, tormented by the endless terrifying news of the year, is enduring the consequences of the president’s behavior, and makes a dark discovery about how 2020 got to be this bad. Produced with Maya Rudolph and Natasha Lyonne, it reveals a weirder, more cerebral side of Cooper’s comedic sensibility than she’s shown before.

“Natasha was really open to anything that I wanted to do, but I think she was excited about not doing something standard,” Cooper says. “We were both like, ‘Let’s make something weird and different.’” 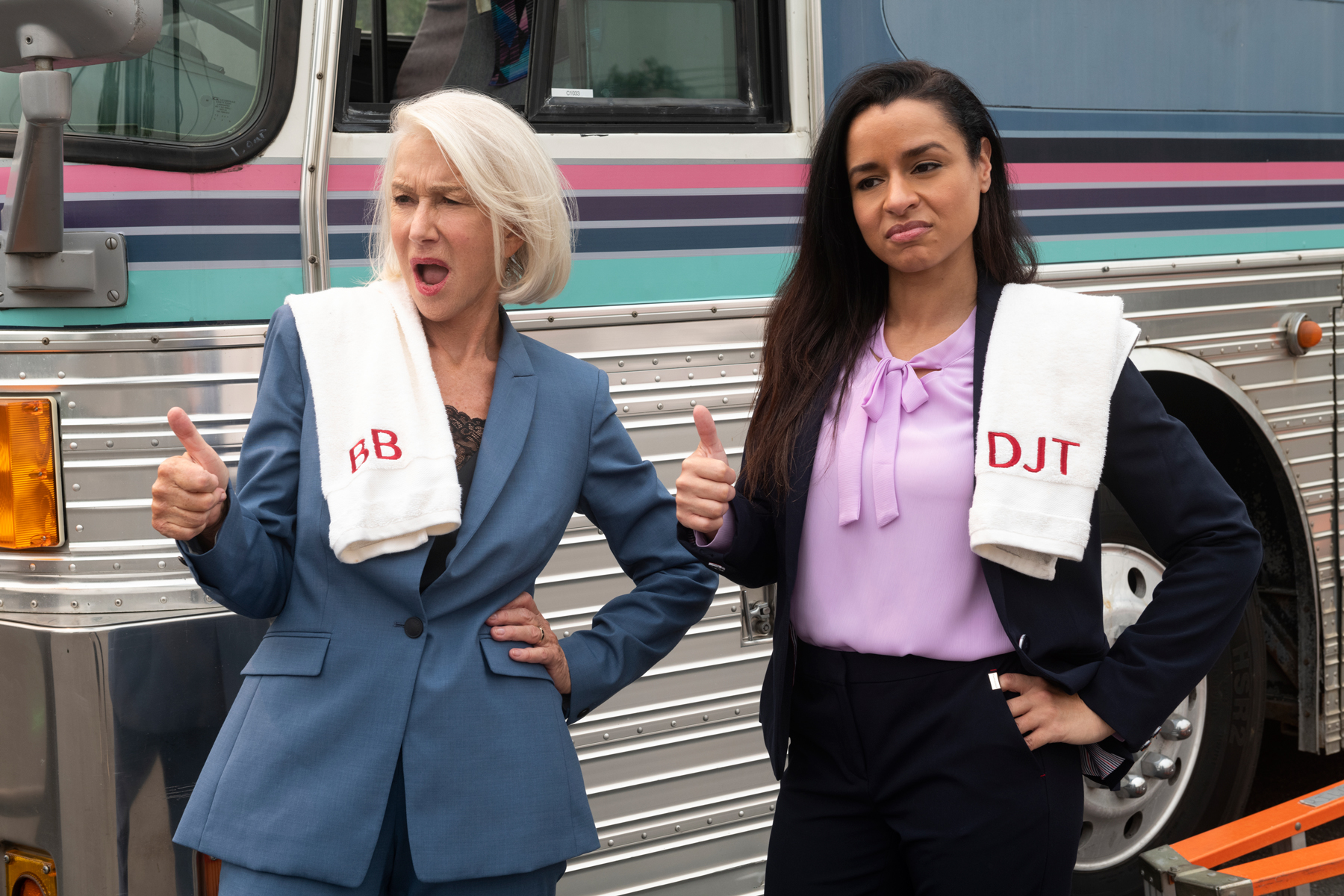 Cooper always wanted to be a famous actor. Born in Jamaica and raised in Rockville, Maryland, from the age of three, she got hooked on theater in high school. It’s a dream she kept alive even as she put her passion for Shakespeare on hold to earn a degree in economics at the University of Maryland. “My parents encouraged me to try something else,” she says. “You know, immigrant parents generally want you to be a doctor or a lawyer or a businessman. That’s kind of the three options.”

While Cooper was working corporate jobs in her 20s, she was acting in independent films and performing at open-mic nights, methodically honing her craft. A fan of The Colbert Report, she used to dissect Stephen Colbert’s monologues and assess what made them funny. “I would write them all down and then I would break down each joke and figure out exactly why each one worked, and then try to recreate it in my own voice,” she says.

When she finally got the courage to quit Google for comedy, the male-dominated New York stand-up scene left her searching for a place to fit in. “You go to these open mics and it’s all white guys, and they’re talking about certain topics, and you’re like, ‘Maybe that’s what I should talk about,’” she says. “As a woman, as a black woman, as an immigrant, it kind of muddles things for you, because you want to be successful, but you also want to be successful in your own way.”

By the end of 2019, Cooper had been dedicating herself to comedy for five years, and she was almost ready to give up. She’d written a TV pilot that wasn’t getting picked up, and she couldn’t get agents to call her back. She’d tried without success to get an audition for the Just For Laughs festival, a massive annual showcase in Montreal, and pushes to get more publicity for her books weren’t yielding results, either.

Then came the Trump videos. Barred from live gigs during the Covid-19 pandemic, Cooper was looking for ways to stay productive. “I was stuck at home, and I was trying to create something viral,” she says. “I didn’t really have anything else to do during the quarantine. It helped me get through it, and then it pretty much changed my life.”

The videos’ smashing success launched Cooper onto Zoom calls with Rudolph and Lyonne, who run a production company together called Animal Pictures, and right into a deal making a special of her own design for Netflix. “I was on that call trying not to lose my mind, literally,” Cooper says. “I’m just like, ‘Keep it together, keep it together.’”

A devotee of David Cross’ and Bob Odenkirk’s Mr. Show, Cooper pitched them a sketch show set in the context of a morning news program, hosted by an anchor named Sarah Cooper. “I wanted to do something with sketch and with cameos, but I wanted it to have some container, a feeling that it was a cohesive thing,” Cooper says. “And we’re just all glued to the news right now, and there’s a disconnect of watching them report on these things that are just terrible and then be like, ‘And now moving on to the weather!’ I liked the idea of satirizing that. I’ve also always had this little dream of being a morning show anchor.”

Rudolph and Lyonne were sold on the vision. “This was a moment for everyone who fell in love with what Sarah was doing to get in on the action,” Rudolph says. “And it was cathartic for all of us to feel this call to action and like we’re gonna put some sort of dent in what this all means.”

Finally being in an environment with women in charge was a huge relief, Cooper says. She credits the dynamic among them for helping some of her zanier ideas make it into the final product, including a skit where Aubrey Plaza plays an infomercial host for a QAnon-affiliated version of QVC. Cooper was writing with Lyonne late one night, she recalls, when she blurted out the concept of “QAnon QVC.” She tried to take it back right away. “I literally said, ‘That’s stupid,’” she says, but Lyonne loved it.

Cooper says, “You need someone who’s gonna take that little idea that you’re about to shoot down, because you have this voice in your head that says everything you think is stupid, and be like, ’No, actually, this is a good idea. Let’s try it.’”

The process of working on the special has also broken Cooper out of her methodical, Colbert-analyzing comfort zone. “Before, I was like, ‘What’s A plus B equals C? What’s the formula here?’” she says. “Working with Natasha and Maya, it was just like, take your formula and get rid of eight of the knowns and put in some random stuff. Then, instead of going from point A to B, go from point A to a point that doesn’t even exist.”

Amid all of the special’s off-the-wall moments — from a haywire weather forecast from hell to appearances by Marisa Tomei as Satan, Megan Thee Stallion twerking from home as herself, and Dame Helen Mirren as a sycophantic, towel-snapping Billy Bush aboard the Access Hollywood bus — there’s one ad-lib that Cooper says makes her “heart sing.” In it, she asks the morning show’s producer, Scooter (played by Fred Armisen), if he made the coffee she’s drinking. “No, I did not,” he replies, and they swiftly move on.

She wants more of that quirky, low-key discomfort in her future work, comedy that mines the style of mockumentaries like The Office and This is Spinal Tap. “It’s not me, but it’s what makes me laugh,” Cooper says. “Just awkward silences and the interpersonal moments.”

Thanks to her newly-raised profile, both of Cooper’s books that didn’t sell so well back when are now in development as TV series, and she’s excited for that format. “All the things I want to talk about are so fun to put in the mouths of characters and create situations around them, and I feel like there are so many more possibilities with that than if I just went on stage and told a story,” she says. Not that this means Cooper is done with stand-up. “It’s always been one of those things, like, I want to have an hour special. I want to be Dave Chappelle. I want to have that amazing experience where I just bare my soul. But for right now, I’m focusing on television and creating characters and stories.”