It’s hard to imagine the shock that a viewer might have felt if they’d tuned in to HBO late on Friday, October 27th, 1978. They would have recognized the comedian who bounded — literally bounded — on to the stage of that night’s On Location special, even if they didn’t live in San Francisco and frequent stand-up showcase joints like the Holy City Zoo. Most folks would thought of Robin Williams as just the guy who played Mork, the oddball alien from that memorable Happy Days episode in the early spring of ’78. That guest appearance, and some network desperation, led to the suspender-wearing dude from Ork getting his own show on ABC. Mork & Mindy started in September of that year and instantly turned into a hit. The former Julliard graduate was suddenly a TV star.

'Robin Williams: Come Inside My Mind': 10 Things We Learned From New Doc

Before he made shazbot a household phrase, however, Williams was a comic who had been logging in club time throughout California, impressing his fellow stand-ups with a free-form, rat-a-tat-tat data dump of an act. You got a taste of this manic, dynamic, unpredictable energy on his sitcom, for sure. But that was nothing compared to what he’d give you if he had a microphone, a stage and no censors — network-employed or self-generated. His series had only been on for a month. And Reality … What a Concept, the bestselling comedy album that gave the majority of his new fans a taste of uncut, unfiltered, unleashed Robin, was still close to a year away from hitting shelves.

So most cable subscribers wouldn’t be prepared for the whirling dervish who walked into the spotlight at the Roxy. The fake game show sketch that kicks Robin Williams: Off the Wall, featuring the man of the hour in various costumes and trying out silly accents; you still file it under Mork-business-as-usual. But then the guy in the baseball cap, the same one conspicuously rubbing his nostrils while strolling backstage, starts his set. He uses the mic stand as a prop. He pretends to be a hillbilly fucking a pig. (Mork From Ork works blue!) He asks if anyone is on drugs and then slowwwwllly taaaaallllks tooooo theeeemmmmm. He imitates preachers and munchkins and rednecks, drops references to Lincoln and Astaire and African tribal dances and quaaludes. He conducts two-way dialogues by himself and does a mini-Shakespeare play about coming to Hollywood. (“Hark, the moon, like a testicle, hangs low in the sky.”) At one point, he climbs up to the balcony and begins improvising with the folks in the cheap seats.

It’s exciting, it’s confusing, it’s verbiage moving at a velocity that you can barely keep up with. Now, we recognize all of this as what Williams did, and did brilliantly, as a performer — Robin’s gonna Robin. But back then? Suddenly, you wondered whether this man really was from another planet altogether.

That headspinning HBO special shows up on the first disc of Robin William: Comic Genius, a Time Life 22-DVD box set that runs the span of the late comedian’s career and collects all sorts of odds and ends, bits and pieces into one doorstopper of an in-memoriam. His four other HBO specials, including his groundbreaking 1986 An Evening at the Met and 2009’s Weapons of Self-Destruction, are here as well. So are [deep breath] three pre-breakthrough TV appearances, 11 episodes of Mork & Mindy, a trio of SNL hosting gigs, a handful of Tonight Show sit-downs (Carson and Leno versions), eight drop-bys on Jimmy Kimmel Live!, more than two dozen other respective chat show and awards show/tribute bits, an extended version of his Inside the Actor’s Studio episode, footage of his USO tours, a previously unseen 2007 show at the MGM Grand, some onstage interviews and Marina Zenovich’s posthumous 2018 doc Come Inside My Mind. (A partridge in a pear tree sold separately.) 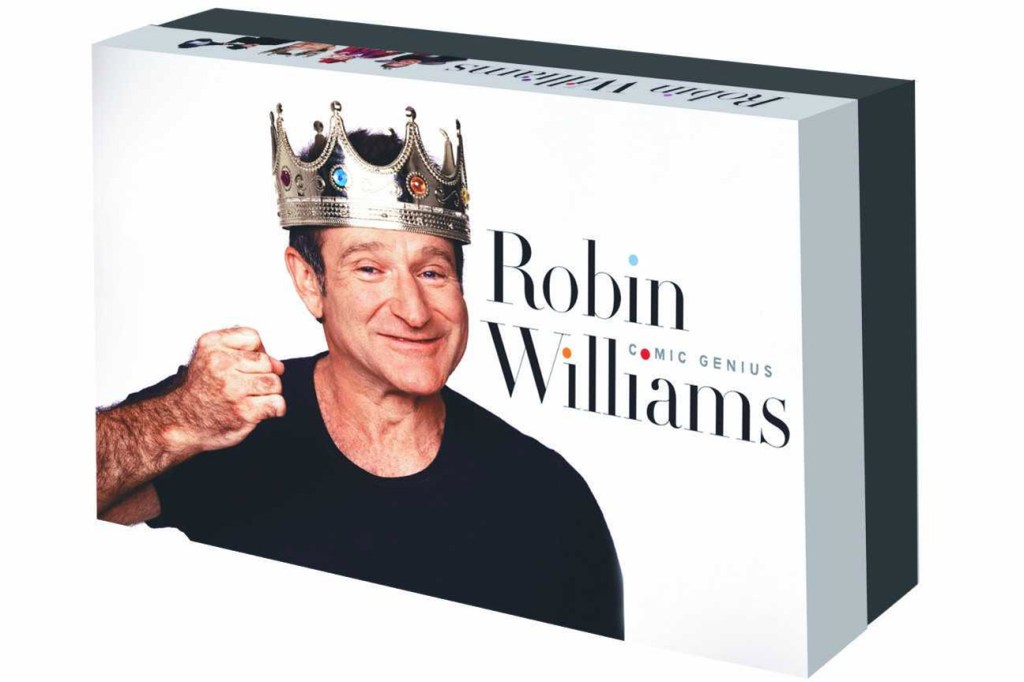 In other words, you get a lot of Robin — not just some 50+ hours of viewing but decades’ worth of material, from his feathered-hair, marching-powder-fueled early days to his weathered, statesman-of-stand-up final years. For fans, of course, the ability to collect so much Williams visual ephemera in one package is a gift from the gods. But for comedy-nerd completists, the sort of people who study the form and argue over the peaks of its practitioners, this intimidating set is close to a dream. Whether you dug his signature stream-of-conscious riffing or not, there’s so much packed history in here — brick-wall club sets, arena concerts, chat-show patter, sketch comedy, video snippets, sitcom laugh-trackery, comedian-on-comedian conversations — that you can partially trace the various evolutions (and devolutions), detours, highs and lows of Funny Business Inc. in the last third of the 20th century.

There are a plenty of self-evident truths you’ll find reiterated and repeatedly echoing in Comic Genius, starting with the fact that Williams had more impact than influence on comedy — he was a singular talent who didn’t spawn imitators so much as encourage anything-goes wackiness in peers and apostles. You’ll be reminded that he wasn’t afraid to recycle a good joke over and over again (you’ll hear his crack about small breasts, “I’ve seen bigger lumps in oatmeal, try pushing them together to make one good one!” dozens of times and in every represented decade of career). The man was a first-rate talk show guest, whether he was cracking up Carson or Oprah or Graham Norton. Also: He loved a great shit joke as much as a good Schopenhauer joke and his ability to craft a bit seemingly out of thin air was uncanny. Some of his shtick, like the Southern preacher bit, could get tiresome with repetition; some of his funny voices, like an all-purpose Asian accent (groan), a caricarturishly sing-song “gay” shriek (ugh) and a go-to cadence we’ll gingerly call “angry inner-city African-American” (permanent cringe) have not aged well at all, to put it mildly.

But equally importantly, all of this material demonstrates why Williams more than earned the title of this box set. The sheer scope of his sense of humor and the physical energy he put into bits could turn something simple, i.e. changing a baby’s diaper or opening up about his cocaine-addiction years, into a three-act play requiring a syllabus and footnotes. While the sound and fury of his delivery could often be overwhelming, and could sometimes be used to simply batter you into laughing, he also knew how to turn it into rocket fuel for his routines in the best possible way. When Williams could fuse that scattershot manicness into a more structured act, he was unstoppable; it’s why his Evening at the Met, and his later, more confessional Weapons of Self-Destruction special, feels like you’re watching Ali fight or Jordan dunk. And he could be a hell of a team player in duos (see his Jonathan Winter assists on The Tonight Show clip) and sketch work, though the SNL skit that stands out here — in which a Shakespearean actor keeps improvising, to the frustration of cast members and the Bard himself — feels telling. Williams could not help himself. You often couldn’t help cracking up.

There are some odd omissions here (why include three Carson-era Tonight appearances, but not his first slot in ’81 or his incredible guest turn on the host’s penultimate in ’92?) and the extra original interviews add very little to the mix. We know enough about Robin’s tragic exit and his legacy that there’s little left to be said on those counts. And it ain’t cheap. Yet poring through these specials, TV clips and some genuinely rare stuff — who wouldn’t want to check out his toast to Richard Pryor while in Mrs. Doubtfire drag, taken from Robin’s own VHS copy? — you walk away with a 360-degree take on what Williams left behind.

The temptation is to finish a marathon-viewing of this by ending with Zenovich’s doc, which covers everything from cradle to grave. Better, however, to go out with “An Evening of Sit Down” between Williams and comedian David Steinberg, what’s arguably the crown jewel of the whole Time Life shebang. A chronicle of a 2012 live event in Montreal in which both comics talked shop, it features the requisite amount of steroidal Robin riffing. Yet you also see him in awe of Steinberg, egging on the Canadian moderator to tell more stories about his career; a recounting of a Richard Pryor bit he saw his friend do once (and once only) is a great reminder that he was a student of comedy as much as he was a virtuoso practitioner of it. The laughs you hear coming out of Williams as he listens attentively to his companion are even more gratifying the ones he generates. There was a lot of give-and-take when Robin went into full-flight mode. To see him mostly giving in this segment feels like a glimpse of someone who was more than the sum of his comic assaults — and therein lies the gift.