In 1992, MTV premiered an ambitious, new social experiment: the true story of seven strangers picked to live in a house and have their lives taped to find out what happens when people stop being polite and start getting real. Soon after its debut, The Real Worldwas a bonafide hit.

For 32 seasons, it was at the forefront of exposing audiences to wildly different people and unfiltered personalities while moving from city to city around the country (and in some cases, the world). Ultimately, each season was a unique experience, providing a living time capsule of America at the time with the housemates dealing with specific issues and varying perspectives.

As the series grew in popularity, the franchise introduced Road Rules, a spinoff inspired by the Los Angeles season, and brought its growing cast of characters together in the ever-evolving physical and social competition, The Challenge. Even in its final seasons on MTV, The Real World altered the experiment, with significant changes to the format by bringing the roommates most significant exes to live in the house during Ex-Plosion, forced members of the house to face “skeletons” on Skeletons, and introduced Road Rules-like challenges that could result in elimination from the house during Go Big or Go Home.

'In My Room' With Alex Hall

The Gibson App Is Changing the Guitar-Teaching Game

Now back for season 33 exclusively on Facebook Watch, The Real World: Atlanta is going back to its roots for its most authentic season yet. The core focus of the social experiment — bringing seven strangers together — is front and center as Arely, Clint, Dondre, Justin, Meagan, Tovah and Yasmin move into the Real World house.

Much like the first few seasons, the roommates reflect the contemporary experiences of adulting all young people face. This year, the house includes a DREAMer and teen mother, a smalltown conservative, a queer feminist, an emerging leader of the black community, a pretty West Coast girl and survivor of trauma, a queer, black Republican, and a deep-rooted Catholic. The experiences each housemate have had prior to the show will undoubtedly influence their interactions and relationships with each other.

In the first few episodes, some of today’s most topical issues — immigration, LGBTQ rights, the #MeToo movement and race relations — are addressed almost immediately as the housemates get to know one another. Not long after meeting, Arely reveals her immigrant status and explains what a DREAMer is to Yasmin and Dondre, who takes issue with people who cross the border illegally. Later, Justin gets into an argument with Tovah over her inability to openly discuss race-related topics. Both disputes prove to be opportunities for the housemates to engage in real-world issues while opening each other up to new perspectives. Even the tragic loss of Nipsey Hussle provides an opening for the roommates to come together as they go to a public vigil in his honor.

Meanwhile, in true Real World fashion, there are also plenty of hijinks, heartfelt moments and unexpected relationships. Who would have expected Dondre to be the first in the house to throw up — and not only that, but throw up in the kitchen sink? Meanwhile, Arley loses her phone almost immediately — that’s $850 she cannot afford to pay back — and Clint starts texting Tovah, who initially ignores his advances. And we’re only at the beginning of this social experiment. 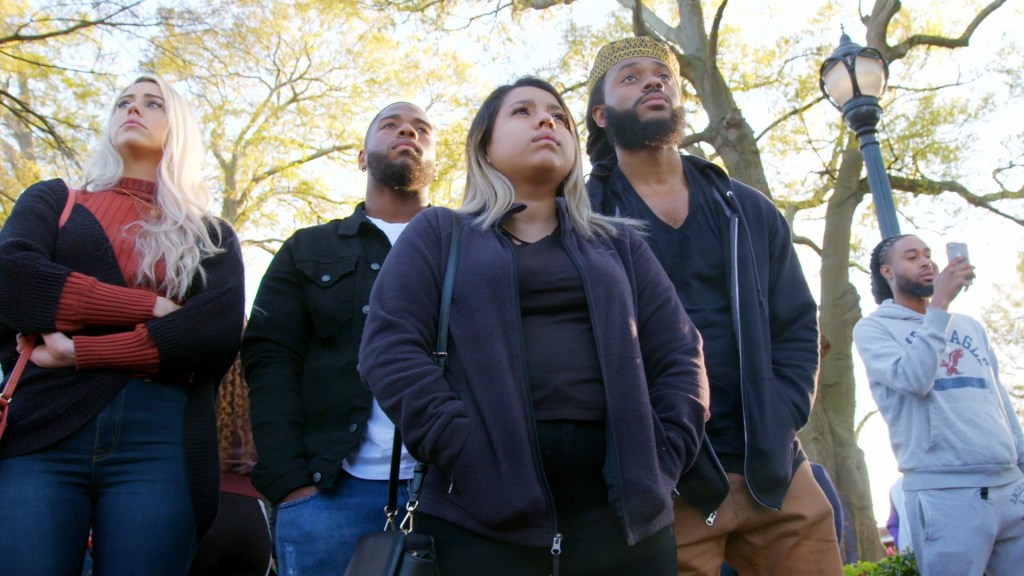 While the end result of this season remains unknown, fans can expect to see each roommate grow in unexpected ways, especially as they share and engage each other. It’ll also help shape how audiences view certain issues, as each cast member puts a new face on some of today’s most socially relevant topics.

The biggest — and most modern — change to the series, however, comes in the way fans can watch and engage with the series. It’s only fitting that the show that pioneered the social experiment nearly thirty years ago embraces an inherently social format, giving fans new ways to immerse themselves in The Real World.

Now on Facebook Watch, the series unfolds in 3 to 5-minute clips dropping Monday through Wednesday that give the feel of real-time updates from The Real World house. Through Facebook Stories, fans get a raw look into The Real World from the perspective of each roommate, including exclusive “confessional” style content that provides insight into all the drama unfolding within the house. Then, on Thursdays, 30-minute episodes bring all the action together so fans can get the full story. Throughout the week, fans can engage with the show and its cast thanks to Facebook’s interactive tools. With its innovative approach to story-telling, the iconic series helps deliver on the promise of the Facebook Watch platform, as it brings to life the intersection of content, community and conversation.

The reboot on Facebook Watch reflects new ways that fans are consuming video, no longer tied to a box or tethered by WiFi cable. Instead, many are engaging with their favorite content through mobile devices as the industry continues to evolve from the traditional to the more innovative. And The Real World — an inherently social series — is one of the first major programs to cater to that experience.

To watch The Real World: Atlanta, follow the series on Facebook Watch and look for content dropping daily, with 30-minute full episodes available on Thursdays at 9 p.m. ET.