Is there any more fraught era in a human lifetime than middle school? It’s the liminal space between elementary and high school, between childhood and your teenage years, when your body is changing faster than you can keep track of and you have no idea who or what you’re supposed to be anymore. All of which makes it fertile soil for both comedy and drama — and makes Pen15 one of the most cathartic shows on television.

Set in an era-perfect 2000, the Hulu series follows Maya Ishii-Peters and Anna Kone, two BFFs who are in trapped in the purgatory that is seventh grade. It’s a funny, cringey, painfully real portrait of early-aughts pubescence, based loosely on experiences that Pen15 showrunners Maya Erksine and Anna Konkle had growing up. The twist is that, while the rest of the cast is mostly comprised of actual tweens, our 13-year-old protagonists are played by the co-creators, who are both 33.

“It’s all the physicality that really helps bring you there,” says Erskine, discussing the show’s makeup and costuming. “Putting the hair on, the mustache… You’re just like, ‘Oh, I’m her. She’s back now.’ But we would wear these bras that strapped down our already-small boobs…”

“Our massive breasts, yeah,” Konkle chimes in with a laugh.

“Yeah, our massive tits,” Erksine continues. “We would be strapping them down, and it naturally made you wanna, like, hunch over to make yourself even more concave.”

The co-creators are talking with Rolling Stone via Zoom ahead of Pen15’s Season Two premiere on Friday, September 18th. The platform probably would have felt like a revelation to their characters, whose most advanced mode of communication is AOL Instant Messenger. But even over video, Erksine and Konkle have an easy rapport that speaks to their longtime real-life friendship.

Pen15 garnered critical acclaim, a devoted cult fan base, and a writing Emmy nomination for its freshman season, which premiered last February. The first half of Season Two brings us back to Trailview Middle School to a world that is by turns funny, sweet, vulgar, and heartbreaking — sometimes all at the same time. It’s a surprising, all-encompassing experience that hits you like a heady cocktail of teen hormones.

The new season picks up where last year’s finale left off: the day after a school dance at which Maya and Anna had the kind of quasi-sexual experience that one has in seventh grade, which is to say that a cute boy touched one of each of their boobs for two seconds. The beginning of Season Two finds them at a pool party, complete with denim-patterned tankinis, uncomfortable flirting, and that terrible hallmark of growing up as a woman: slut-shaming.

“Who gets through that age without going through some real low periods? If you did, I want to meet you,” says Konkle.

Pen15 is the first showrunning gig for the duo (along with Sam Zvibleman), who have been close friends and collaborators since they met as students at NYU. “We were so green when we started this show that we sort of made it up as we went along — how we write, what our process is,” Erksine explains. “When we were in the second season, one of the writers was like, ‘I’ve never seen people break story like this. You break from emotion.’ And we were like, ‘Oh, yeah, I guess we do.’ The challenge this season, which is not our comfort zone, was starting from plot.”

Season Two sees Maya and Anna trying on identities like costumes as they attempt to figure out where they fit in the middle school ecosystem; they join the wrestling team, try out for the school play, and even dabble in The Craft–style witchery. The season touches on topics that include, but are not limited to: menstruation, divorce, racism, sleepover pranks, homophobia, tween love triangles, toxic friendships, and DIY zines about weasels. The results are, in true Pen15 fashion, funny, surprising, and the kind of awkward that you can feel deep in your bones.

“How does that make them evolve? How do they grow up while still being in seventh grade, without having the coping skills to deal with these things? Do you search for other identities?” Erksine asks. “And that’s sort of where we went — where they just tried to, like, fix themselves by putting on different façades.”

Erksine and Konkle’s embodiment of their younger selves is uncanny, an act of transformative magic that allows them to plumb the deepest, strangest depths of young adulthood. Wearing actual 2000s-era outfits sourced by costume designer Melissa Walker is a big help in getting into their roles.

“Half the time, most of the pants didn’t fit, or things were too small. And I’d be like, ‘No, no, no, that’s good,’” Konkle recalls. “Twelve hours into shooting, I was regretting it. But I would like that, because it accentuated the feeling of just constantly being uncomfortable in your skin. Like, never feeling like my body was right, and always trying to fix that or hide that.” 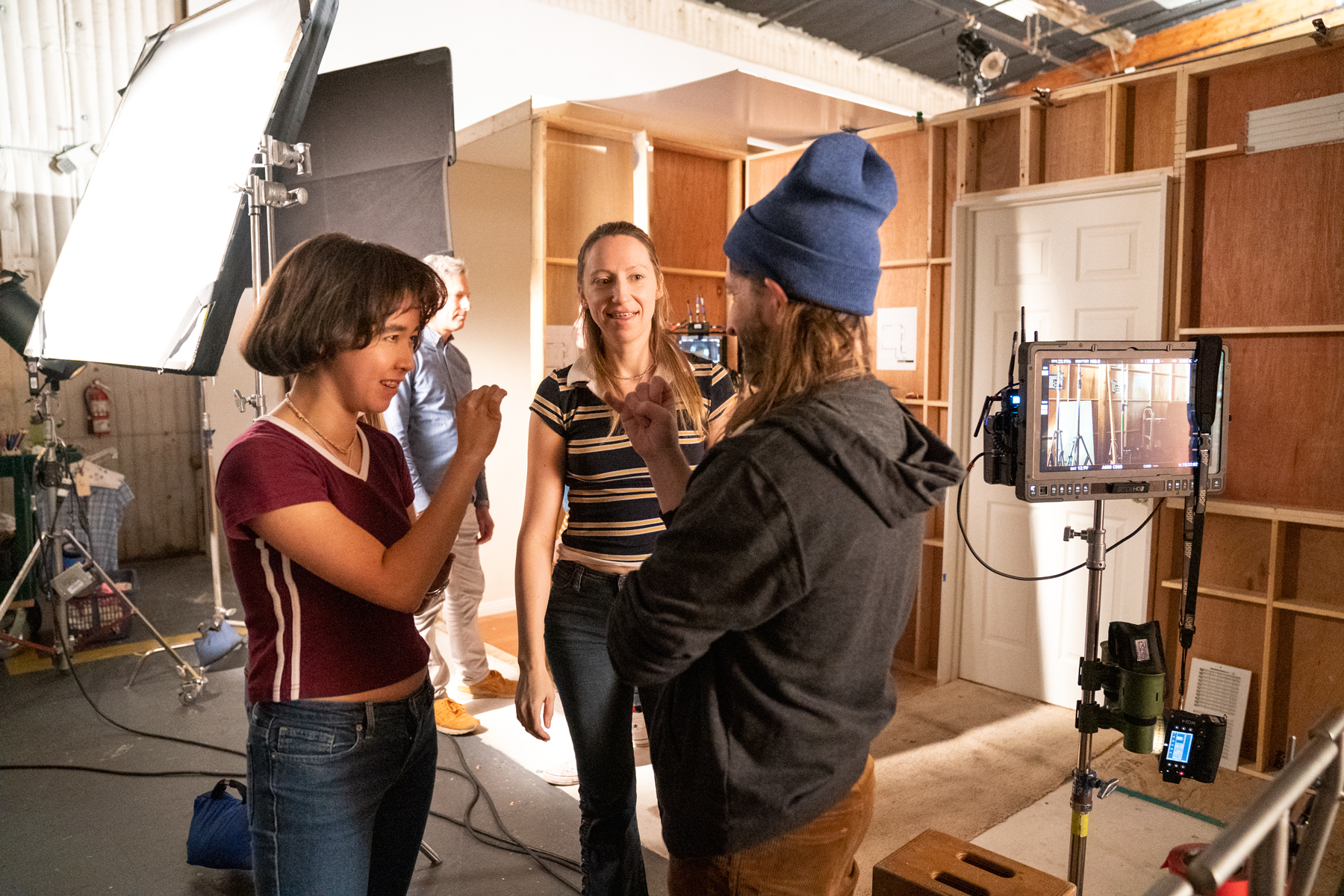 If you’re a millennial of a certain age, watching Pen15 can feel a little like time travel — something that Konkle reveled in when they first began filming. “Those were the best days,” she says, “walking on the set and seeing a rack of clothes and being like, ‘Had that, had that, had that.’ That happened in my [character’s] room the first time I saw it. I freaked out, ’cause I had the same phone. And everyone was like, ‘We get it. You had the phone. You’re showrunning.’”

As in Season One, these new episodes dredge up the emotional reality of middle school, where the most seemingly trivial things can feel earth-shattering. Entire melodramas hinge upon a secondhand Tommy Hilfiger T-shirt, a backed-up toilet, a photo cut out of Teen magazine.

But the heart of Pen15 has always been Maya and Anna’s ride-or-die, utterly devoted friendship. Season Two sees that relationship threatened by the encroachment of Maura (teen actor Ashlee Grubbs), a new girl in school who’s the kind of manipulative you can only be when you’re 13 and have never heard the term gaslighting.

“It was exciting for us to have a character be introduced that could possibly threaten this twosome’s best-friendship at a moment when they’re really low and need another savior that’s not just themselves,” Erksine says. “We originally were like, maybe we need an adult in this role, because it was such a complex character.”

“She was a tough character to write. We were getting a lot of notes that the conflict wasn’t obvious on the page, because we were playing all of these micro-aggressions,” Konkle says. “But [Ashlee] would always surprise me by being like, ‘Oh, yeah. And in the next episode when she does this, it’s actually an expression of this, because she’s upset at her mom because of this.’ And I was always like, ‘Yeah! You’re right. Can you talk to the network?’ She was incredible.”

Season Two widens the lens out a bit from Maya and Anna to also tell the stories of their classmates, all of whom are played by younger actors. According to Erksine, the writers were very careful to tread a fine line when it came to what experiences the teen performers would depict. “It’s one thing when we’re acting out any of these stories that bring us shame. But then to have a kid actor go through that too, that was a big conversation of like, ‘How far do we go with this?’ We were trying to find that balance to tell the story as honestly as we could, but also remember that it’s a kid going through it.”

For the most part, they say, the actors had a good handle on their roles. There was just one issue: modern slang slipping into the early-aughts world of the show. “When they would improvise, they would all be like, ‘Yas, kween!’ And that was the only time I was like, ‘No, no kween. No yas,’” Erksine says.

No matter the jargon, the thing that really makes Pen15 sing is its willingness to excavate taboos and bring them up to the light, to relive the most painful, buried parts of growing up and find the humor and beauty in them. For Konkle, Season Two meant mining her own memories of her parents’ divorce to put into her fictional avatar’s story.

“We’ve always said the things that have been the most healing for us in other people’s art are the secrets and the shame, and that was a big one that I was carrying around,” she says. “And we all just did it together. That was intense, but I’m really glad that we did it.”

“Already getting to play this age is such a liberating experience, because we’re removing all the impetus to look pretty and sit a certain way and be adults, so you get to just have the freedom of being a kid and with your best friend,” Erksine explains. “So then to, on top of that, also play with witchcraft and make-believe and theater and all of those different things — it just brings out more of that kid energy, and it was a fucking blast to do.”