“You want a glass of Burgundy?” Pamela Adlon asks, encouragingly, as she sits down in a ritzy Beverly Hills restaurant. The multi-hyphenate force behind FX’s Better Things then gestures to her full face of makeup, which has been professionally applied for a photo shoot: “By the way, this is not me.” She catches a glimpse of her smoky eyes in a nearby mirror, she yanks out a few fake lashes. When the beverages arrive in giant goblets that make the pours look a little stingy, she offers a polite thanks. Then her husky voice rises jovially over the din: “There’s no wine in it, though.”

To spend even a few minutes with Adlon is to be conscripted into a comforting alliance with her, which is not unlike the experience of watching Better Things. On its surface, the series that Adlon co-created with longtime collaborator Louis C.K., and which returns for its second season on September 14th, is a comedy about a working actor/single mother struggling to raise three spoiled, demonstrative daughters. She produces, stars, co-writes and directs this unusual marvel, which is frequently lauded for being observant, unpredictably moving and unmistakably authentic. It also happens to be based on the 51-year-old Adlon’s life. In fact, Better Things is so deeply personal that any criticism of her character, Sam, stings a bit.

Issa Rae: Why 'Insecure' Is Not Made 'for Dudes' or 'White People'

“Somebody said to me that she’s a passive parent, which I find insulting because I feel like somebody might ascribe that to me,” she admits. The comment is not entirely without merit: In an episode from the first season, Sam comes home early from an out-of-town job to discover that her eldest daughter, Max (Mikey Madison), has thrown a party and wrecked the house. Mom cleans up the mess; the teen is never punished. “It’s very hard, when you don’t have a partner to back you up,” Aldon says. (She divorced her screenwriter husband, Felix Adlon, in 2010; they have three teenage daughters.) “I have no zone defense at all. I said to my oldest once, ‘Wow, if I were my dad, you’d get such a spanking right now.'” Then she turns her palms up helplessly. “It’s a threat made of water and a sieve,” she says.

“Teenagers are assholes sometimes,” she continues. “The only people on this planet that can make me feel like my feelings are hurt are my kids.”

Then her chilled celery soup arrives. “It’s cold,” she teases, and the waiter momentarily blanches.

A typical sitcom’s second season involves a whole new slate of gimmicks and twists, but Better Things is far from typical: It treats previous events as entirely relevant, slowly absorbing past trespasses into its shambolic tableau. Max’s party is hardly forgotten – a forthcoming episode beautifully addresses Sam’s heartbreak over being constantly taken for granted by her daughters. She confronts new challenges as well, such as how the responsibility of caring for an elderly parent – in this case her British expat mother (Celia Imrie), who lives across the street (much like Adlon’s actual mom) – inevitably falls to women. At times, this coterie of dependents threatens to consume her. Sam confesses to a suitor: “It feels like I’m being murdered every day in a vague way that no one could prosecute anyone for.”

This unflinching depiction of parenthood, and personhood, is very much in line with Adlon and C.K.’s creative vision ever since they collaborated on 2006’s short-lived HBO series Lucky Louie, when she was handpicked by the comic to play his wife. (She soon became a contributing writer.) “We saw lots of women who were adorable and well-rested, and then this fucking woman walks in who’s glowering at everybody and she’s hilarious and has perfect comic timing,” says C.K., who writes or co-writes all of the Better Things episodes. “I saw it right away. She had the best instincts and was the most reliable sounding board.”

Up until then, Adlon was best known as the gravelly voice of hapless adolescent Bobby on Fox’s King of the Hill, for which she won an Emmy in 2002. After co-writing, co-producing, and guest starring in several seasons of FX’s Louie, C.K. encouraged network president John Landgraf to give Adlon her own series. “I ran everything that happened on Louie by her, so when I saw Pamela contributing so massively I thought, she needs to get her own thing,” says C.K., who recalls Chris Rock pushing him to do the same back in the Nineties, when he was head writer for The Chris Rock Show.

“Louie called me one day and said, ‘I think you should be directing your show,'” says Adlon, cutting into her shrimp roll. “It was never on my radar to be a director.” She recounts her two prior directorial efforts, which include being a finalist in an MTV-sponsored contest to create a video for Madonna’s “True Blue” in 1986 – “We cast a black heroine and a white guy and shot it guerilla-style,” she recalls – as well as a passionate documentary about the Reagan-era homeless explosion in L.A., which failed to secure her admission to NYU’s prestigious Tisch School.

Fast-forward several decades, not long after a seven-season turn as the vulgar Marcy Runkle on Showtime’s Californication. Adlon remembers having a revelation. “I was doing a little arc on a drama, and Friday turned into Saturday – they called them Fraturdays,” she explains. “They were burning time and money. It was just one of those machines of waste. I called Louis up and said, ‘I’m ready. I can do this better than all these people.'” (Side note: Adlon abhors waste on a profound, environmental, almost cellular level. She insisted her iced tea be served without straws, and was infuriated anyway by a plastic-speared lemon.)

For the show’s inaugural season, Adlon directed two episodes of Better Things. This time around, she helmed all 10. “It was exhilarating,” she says, citing Tracey Ullman, with whom she worked 20 years ago on the latter’s show, as a person who always led by example and wrapped up shooting in time to see her kids to bed. “[Better Things] is such a handmade piece. It worked out very well.” The sophomore season opens with Sam in thoughtful repose, on the toilet, in what turns out to be the middle of a party. Unfiltered and amusing, yes, but also indicative of a more meditative style overall: An upcoming episode features Sam in bed remembering a chance encounter with a new guy from the night before. Then her children barge into the room – the word mom is never as distinctly oppressive as it is on their lips – and her memory of the evening unfolds silently to the score of their distant, quibbling voices.

Incidentally, that new love interest is played by a former child actor whose identity she would prefer to keep under wraps for as long as possible but who, like Adlon, came of age onscreen in the 1980s. Adlon (nee Segall) grew up bicoastal, first in New York and later Los Angeles. As a teenager, she informed her parents – father Don wrote for The Love Boat and Fantasy Island, and also penned softcore porn novels; mom Marina worked in publishing – that she had rifled through the phone book and scheduled a meeting with an agent. Adlon wanted to be an actress for the same reason many young kids do: “I didn’t want to go to school.”

With her wonderfully gruff cadence and a penchant for wearing her older brother’s hand-me-downs, Adlon was frequently cast as a boy who is later revealed to be a girl (Night Court, The Redd Foxx Show), a girl who wants to be a boy (the 1986 movie Willy/Milly), or, most memorably, as the heir apparent to Nancy McKeon’s famous tomboy Jo on The Facts of Life.

Adlon laughs, but she also recalls how adrift she felt when those gender-bending roles dried up. “I used to put people off because I seemed rough around the edges,” she says. “I was very insecure. I didn’t know how to handle being myself.” She took shitty jobs that came her way. On one project, a producer abruptly told everybody on set to go home because they’d run out of money. Another time she was badly injured while shooting a horror movie when a stunt went awry, waking from a brief concussion covered in blood. “In my 20s, I was so fucking alone,” she says. “I would think, ‘I could be dead for three weeks and nobody would even know.’ And this was before cell phones, so it’s really true.” 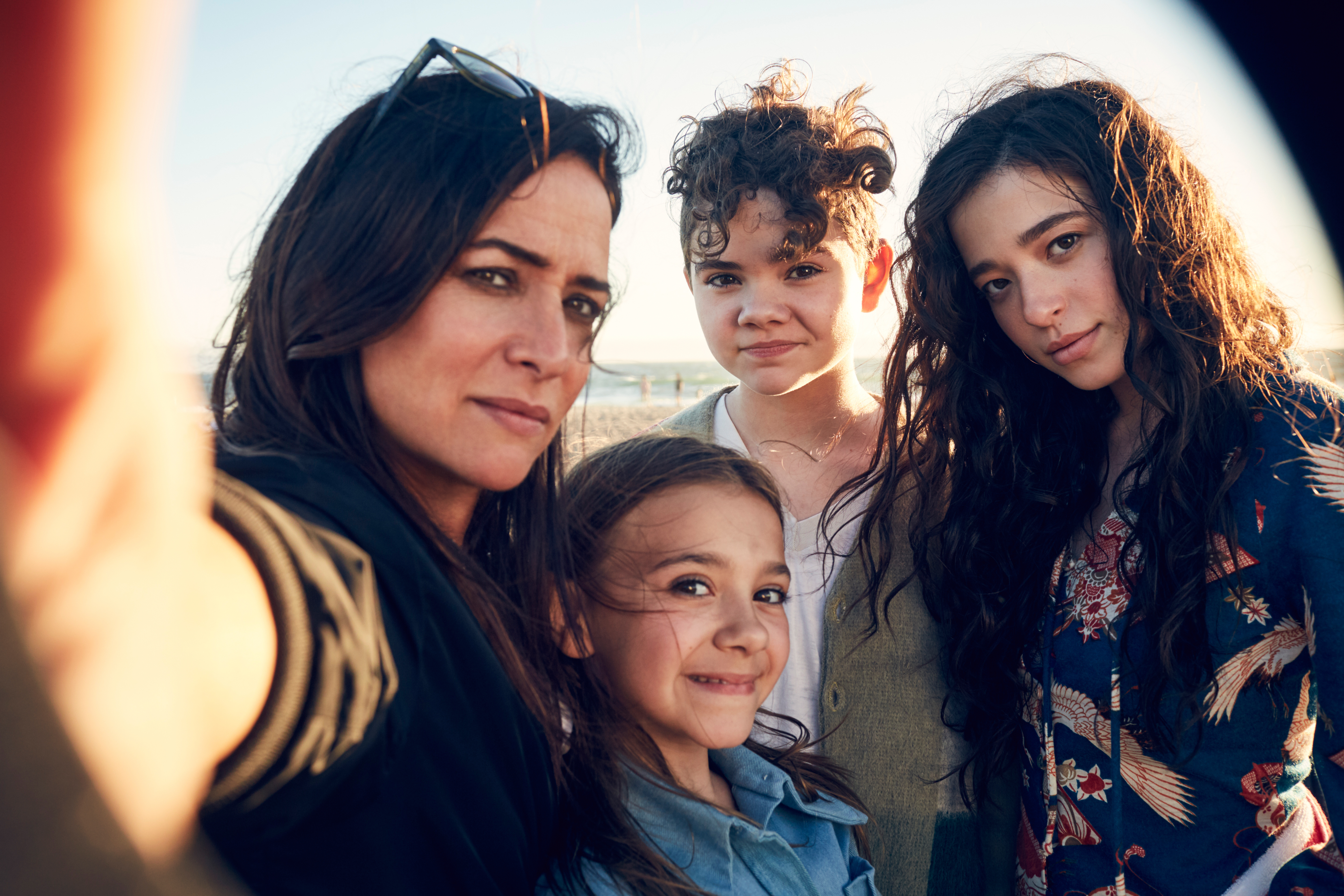 All of this is now fodder for Better Things. “It’s just an incredible evolution for me,” she says. “I have five titles, and I’m the age my dad was when he stopped getting hired for writing jobs. And he was a man!” As boss and star, Adlon is allowed to look irrefutably sexy on her own terms, a set of keys forever dangling from her belt loop. (“I only feel my strength when I’m in pants,” she says.) But most important, her experience with gender norms have found a fresh expression in Sam’s middle daughter, Frankie, played by the captivating Hannah Alligood. In the first-season finale, Max informs Sam that Frankie is a boy. The development had been hinted at all along: An outspoken feminist, Frankie prefers neckties and slacks, her curly hair arranged in a neat faux-hawk, and she eventually gets sent home from middle school for using the boys’ bathroom. Season Two does not immediately pick up the thread, and Adlon doesn’t reveal how Frankie’s identity will unfold. But there’s every reason to trust that it will be handled thoughtfully – because that’s what Better Things has specifically set out to do.

“I think Pamela’s show is more appealing than mine, and better in a lot of ways,” says C.K, who’s put Louie on indefinite pause to pursue this and other projects. “I tend to really enjoy showing the worst of life. I like doing things where the people you love in the show are just fucked. That’s my thing. It’s not Pamela’s thing. She’s open. She likes good news. She likes when people overcome, not falsely. She likes life.”

Adlon breaks out a brass fidget spinner. “This is what I did in the editing room,” she says, handing it over with instructions to keep it moving. “I fidget-spinned my whole season.” She circles back to the ideas that Better Things puts forth about motherhood, and the huge, perhaps unanswerable question of what makes a good parent. She thinks for a moment.

“I’ve been adapting ever since my oldest had her first play date with a boy, and I was like, that’s not normal, because I came from the old school,” she says. “Now boys sleep over at my house. It doesn’t matter which girl, which age. It’s not a sex free-for-all, but it’s normal life. At the end of the day do your kids respect you? Are you modeling a life for them?” Adlon eyes water a bit when she thinks of how her own daughters’ friends text her on Mother’s and Father’s Day. It’s clear that, like the characters on the show, these imperfect, sometimes insufferable humans are the loves of each other’s lives.

“My girls and I gave birth to these stories,” says Adlon. “I just want to tell them.”