Nick Kroll is wiping whitefish salad from the corner of his mouth when a boy approaches our booth. “You are Big Mouth,” he says in accented English, a Mexican kid about 10 years old on holiday in New York’s Lower East Side. “I’m not allowed to watch it,” the boy says, leaning in and out of earshot of his mother, “but I love it.”

The Star of 'Big Mouth' Season 4 Is Anxiety

Over a nearly 20-year career in improv, sketch shows and sitcoms, Kroll, 40, has crafted dozens of unforgettable, despicable characters. But Big Mouth’s misfits may be his most human creations — and the most resonant. The show has a rare 100 percent rating on Rotten Tomatoes. And though Netflix is stingy with data, Kroll has been told there’s a high percentage of repeat viewing.

Kroll was in Argentina filming Operation Finale (a drama in which the actor plays a Mossad agent on the hunt for Adolf Eichmann) when the first season debuted in 2017. Returning to his native Westchester County, New York, for his nephew’s bar mitzvah several weeks later, he found it had already struck a chord. “My nephew and his friends were all quoting the show back to me, which was superweird and really fun,” he says. “Then, later that night, a bunch of their parents were saying it’s given us this platform to talk about some of this stuff with our kids. That’s, like, supergratifying.”

Still, public service has its limits; at his core, Kroll is a slave to the comedy: “My first goal is to make something funny and entertaining. I think you earn the supercrazy gross, whoa-what-the-fuck-did-they-just-do stuff by having the honest, emotional moments.”

Though he is one of four co-creators, Kroll is Big Mouth’s MVP: He’s a producer, co-writes many of the episodes and voices 25 characters, including one of two central horndogs, Nick. On a basic level, Big Mouth is the unsanitized, unvarnished story of Kroll and his childhood friend Andrew Goldberg, another co-creator, who came up with the initial idea. “There’s a lot of shared history,” Goldberg says. “I really did come in my pants at a school dance. Nick did get pantsed in front of his crush.” Kroll and Goldberg met in first grade, solidified their unusual comedy bonds in middle school (they made a short film where Kroll played Roy Cohn to Goldberg’s Edith Bunker) and, after Goldberg worked on American Dad! and Family Guy, reunited for Big Mouth.

Recently, Kroll says, one of his nieces was puzzling out why he seems to be of a younger generation than his three older siblings. “She goes, ‘Well, it’s because Uncle Nick lives a child’s life.’ And I was like, ‘Yeah, fair enough.’ I lead a very privileged life in a number of ways. I am old enough to know how the world works and to make a living, but also young enough that I get to be a little rascal and run around and do whatever. But it’s hard to explain to your niece that it’s also hard work. Yes, Uncle Nick lives a child’s life, and he works constantly and has constant rashes from stress.”

Some of what you need to know about Kroll’s childhood can be explained through his attendance at the following sporting events: Game 6 of the 1986 World Series, featuring a muffed grounder at first base and the Mets’ extra-inning win against the Red Sox; the 1995 game where Indiana Pacer Reggie Miller scored a ridiculous eight points in nine seconds, choking out the Knicks (and Spike Lee) in the NBA playoffs; and Super Bowl XXV, when the Bills lost to the Giants after a last-second field-goal attempt went wide right. “It was during the Gulf War,” Kroll says, “and Whitney Houston sang the national anthem in a Sergio Tacchini warm-up suit, and the planes flew over.” He sighs. “I had pretty good seats, too.” Then, suddenly self-aware if not self-conscious: “It has not been the toughest road.”

His father, Jules Kroll, was running his own father’s print business in Queens when he had the idea to create a security firm to battle low-level corruption and graft. That grew into a multinational outfit with thousands of employees in 20 countries and a client list that included Wall Street power brokers, monarchs, too many governments to count, and corporations uninterested in getting fleeced by extortionists or terrorists. “When the Kuwaiti government went after Saddam Hussein’s assets,” Kroll says, “they hired my father. We had a cop stationed outside our house.” Jules sold the company in 2004 for close to $2 billion and started a new firm focused on securities fraud, which he runs with Kroll’s older brother, the same guy who shared with Nick the gifts of Caddyshack, Andrew Dice Clay and the Jerky Boys. 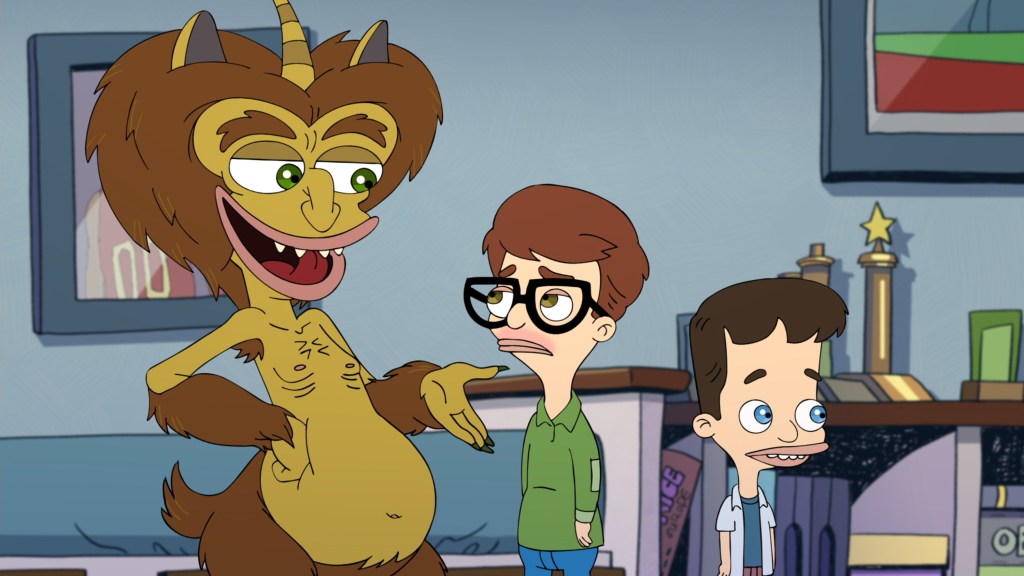 Kroll was a coordinated kid, a gifted athlete, but a late bloomer. When his size made the playing field too uneven, he started pouring his energy into being funny. Kroll attended Rye Country Day School, but it was a lone semester spent among “the confident weirdos” of the Mountain School of Vershire, Vermont, that may have left the most colorful mark. “All of my friends there were pretty weird in a great way,” he says. “I remember reading Charles Mingus’ autobiography and doing a lip-sync to James Brown’s ‘Sex Machine’ in a weird orange workman’s jumpsuit.” That was not something Nick Kroll of Rye Country Day would have tried, though Goldberg contends his friend was always “a wiseass who didn’t give a fuck.” A high compliment. Twenty-five years ago, Goldberg says, “if you’d told the 13-year-old Nick and Andrew that one day they’d have a hit show about their lives, I would’ve been like, ‘Get the fuck out of here,’ and Nick would’ve been like, ‘Of course.’ ”

After graduating from Georgetown in 2001, Kroll moved to New York, where he hit open mics and improv workshops and started collecting collaborators he’s worked with ever since. Eventually he headed to L.A., landing a starring role on FX’s fantasy-football sitcom The League and the recurring part of the Douche on Parks and Recreation. In 2013, his Kroll Show set loose upon the Earth hilarities such as clubhound Bobby Bottle Service, hapless celebrity publicist Liz G. (of the firm PubLizity) and, alongside Mulaney, hipster geezers Gil Faizon and George St. Geegland (so beloved the pair took the act to Broadway and then a Netflix special called Oh, Hello). But doing a sketch-comedy show in the age of Key & Peele and Inside Amy Schumer was a drag on Kroll’s victory lap. “I was like, ‘I know my show is working. I know it’s liked,’ but seeing the cultural impact of those two shows . . . I felt I had not succeeded in the way that I wanted to.” There’s a pause, and some light self-reflection. “I’m probably more competitive than I’d like to admit.”

Who knew that an animated show, as Kroll says, “about kids masturbating” would be the breakthrough, the feeling that he’d been part of something that was holy-shit hilarious and maybe even noble, a thing that made an unavoidable patch of the human experience a little more bearable? He says he’s worked to find balance between being hard enough on himself to create something great but not so hard that he can’t enjoy it. “It’s like trying to control the 13-year-old boy in my head,” he says. “He still wants a big bushel of pubic hair and to be able to grab rim on the basketball court. But now I understand the importance of personal grooming, and that it’s OK to just touch the net.”