Brosnahan, 28, had moved out west on the probably-well-intentioned-but-ultimately-bad advice of a studio executive, who told her shortly after she’d graduated from N.Y.U., “You can be an actor in New York, but you can only make a living as an actor in L.A.” She lasted eight months, during which she found herself “talking about juice a lot and drinking juice a lot and spending a lot of time planning yoga. I was changing in ways I never thought I would and did not like.”

'The Marvelous Mrs. Maisel' Season 2 Review: Midge Is A Star Without A Spotlight

Luckily, she found her way back to her beloved New York, and onto one of the New Yorkiest TV shows of all time. The Marvelous Mrs. Maisel, in which Brosnahan stars as the titular character, a 1950s Jewish housewife-turned-comedian, is a rose-colored version of the city scrubbed clean of its grime and balletic in its bustle. It reeks of pluck and charm, just like its heroine. The series racked up eight Emmys after its debut season, including one for lead actress, nearly sweeping the comedy category. Season Two, currently streaming on Amazon Prime, finds Miriam “Midge” Maisel at a crossroads where she must choose between jumping with both feet into her budding stand-up career or reverting to a monotonous if secure life of playdates and Jell-O molds.

It’s a position that presents some rare moments of vulnerability for Midge. Despite her world being in a state of total upheaval — her husband cheated, she’s moved back in with her parents, she’s balancing a day job with her secret life as a comic at night — this is a woman who’s hardly shed a tear amid the drama. Following one brief, tender moment over the phone with her estranged husband Joel (Michael Zegen) early in the second season, she snaps right back to the brassy, ballsy character whose sheer force of personality, conjured by the zinging dialogue of co-creators Amy Sherman-Palladino and Daniel Palladino, sometimes seems to propel the show forward all on its own.

Though the Palladinos are exacting writers with a very clear vision, they agree that Brosnahan’s Midge is gutsy in a way that even they hadn’t quite imagined at the outset. “She brought a steeliness,” says Palladino, recalling Brosnahan’s audition. His wife offers with a satisfied grin: “She was ruthless. Cutthroat.”

Meeting Brosnahan in person — a wisp of a woman all of five-foot-three, with a waist about the thickness of a Twizzler — this characterization is difficult to buy. It’s not just that she is petite, of course. She is also exceedingly polite, disarmingly self-deprecating and refreshingly un-Hollywood. Her press-day look of a pearl-accented pantsuit, strappy heels and prim ponytail belies her everyday style: jeans, tees, sneakers, no makeup.

The earthy girl behind the polished outfit cackles at her bosses’ description of her audition chutzpah. “I was acting my tits off!” she says, sounding as though she’s reading a page from one of their scripts. Growing up in Highland Park, Illinois, the oldest of three kids, Brosnahan says she was shy and a little nerdy, though she joined her school’s lacrosse and wrestling teams. Still, to the extent that confidence is learned, she concedes with a wince that she likely gained hers not from playing sports but from hanging out with a lot of guys. “I hope this changes for future generations,” she says, “but truthfully, I think it came from having a lot of male friends who didn’t know any other way, who had been raised to walk through the world with their heads held high and not constantly question themselves. To do what they liked, follow their passions, speak their minds and take up their own space. My dad and I were also very similar, so having that male influence around me was certainly something that I absorbed.” 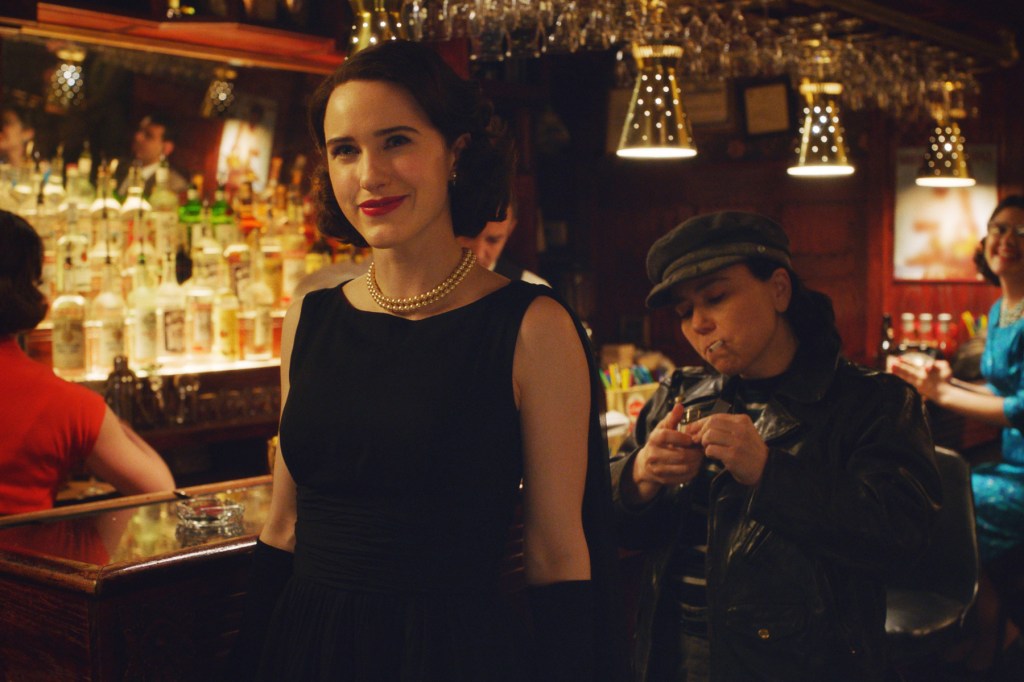 While Sherman-Palladino and Palladino have steadfastly maintained that Mrs. Maisel is not an allegory for the gender politics of today, the show feels somehow contemporary down to its bones. Midge’s humor has a bite that is both modern and decidedly feminine. She is not copying the boys — and, role models notwithstanding, neither is Brosnahan. “As a woman walking through the world and living through this moment in time, I also have access to rage,” she notes, “which is useful in bringing to this character.”

It wouldn’t be the first time she’s channeled a surprisingly ferocious energy in her work. Brosnahan’s breakout role as a troubled hooker on the Netflix political thriller House of Cards was intended to be a one-episode appearance. Instead, after Brosnahan blew away the showrunners and her co-stars, it turned into a three-season arc and landed her an Emmy nomination. The character of Rachel Posner (who was called Rachel after the actress because, before Brosnahan showed up, the writers hadn’t bothered to name her) was wounded but whip-smart, brimming with anger and disgust at the Washington players who availed themselves of her services. Her trade was illegal, but she had a stronger moral code than most of the people she dealt with. Naturally, she was murdered.

After her run on Cards ended, Brosnahan worked steadily, bouncing from Manhattan, a sharp but overlooked WGN America series about the creation of the atomic bomb, to Crisis in Six Scenes, Woody Allen’s first-ever television show (a bomb of another sort) and Patriots Day, the big-screen dramatization of the Boston Marathon bombing. Maisel, however, brought her onto America’s iPads and laptops for streams and re-streams, delivering the kind of stardom that, if not Clooney-circa-ER-level, now prompts double takes at coffee shops and, yes, grocery stores around New York City, where the show shoots and where Brosnahan lives. Perhaps because of her understated presentation off-set, people often seem unsure if she really is that actress from that show. Or maybe it’s that the grit and moxie that can make Midge seem 10 feet tall soften a little when she turns back into Rachel. Brosnahan’s limited downtime, for example, is spent not club-hopping (comedy or otherwise) and do-you-know-who-I-am-ing around town but playing doting dog mom.

“My perfect day is waking up later in the morning and snuggling with my puppies,” she says, eyes glazing over as if she were describing a trip to the South of France. “I have a pit bull and a Shiba Inu. They’re the best friends. Taking them to the park, having a leisurely morning surrounded by many dogs, getting coffee with a friend, chatting for hours about everything, anything — a real, proper catch-up. Reading a book for fun — a real book, not on a Kindle! Walking around New York…”

This is the kind of peaceful vision of New York that only a true New Yorker could have. In fact, Brosnahan has just celebrated a decade of living in the city by officially changing over her driver’s license. “I do feel like I can finally call myself a New Yorker. I feel like 10 years is the mark,” she says, adding hopefully, “That’s what I hear.” She swells with pinch-me pride at the idea that she gets not only to live in this concrete idyll but also to shoot here, on a show that is “such a love letter to New York,” she says. “It’s romantic in all kinds of ways I couldn’t have imagined I’d get to be a part of.”

It is ironic, given the city’s reputation, that Los Angeles is the place Brosnahan says made her “neurotic,” with its emphasis on looks — and a certain kind of look at that — over substance. When she arrived there, porcelain-skinned, un-blond and un-busty, casting agents didn’t quite know what to do with her. “Something about me made me get labeled very quickly as ‘alternative,’” she says. “I don’t look like…an L.A. thing.” On the contrary, she looks, like her comic counterpart, like a woman a little too smart to take the expected path, who arrived way ahead of her time.